Ricotta, Rye, and Potato: The Complex History of The Hanukkah Latke

The fried potato latke we've come to know and love - and heavily associate with Hanukkah - wasn't always the norm. 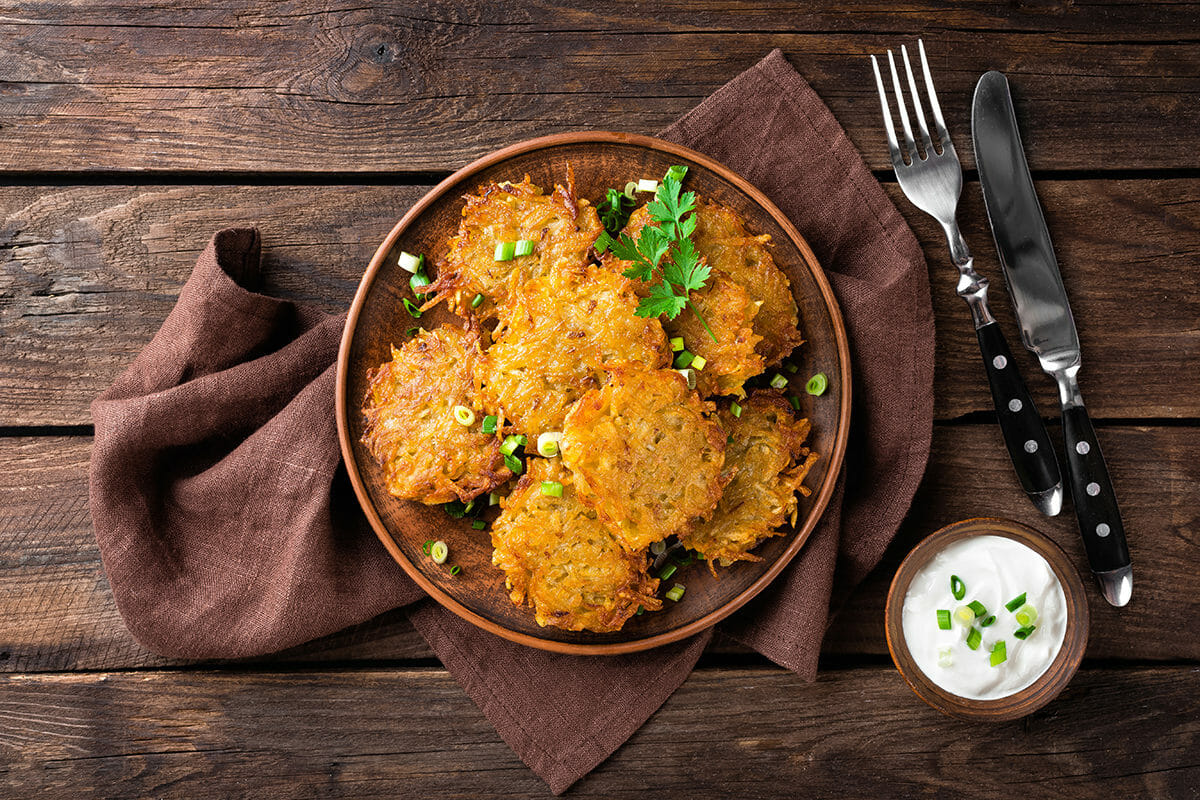 Before potato, latkes were made from cheese or grains.(Potato pictured above)
Photography By Sea Wave / Shutterstock.com
Share
Tweet
Pin
Email
136 Shares

Beginning in the 14th century, a Hanukkah tradition of eating fried ricotta pancakes – the original latkes – gained popularity among Jews living in Italy. The tradition sprang from the Hebrew story of Judith, a fearless woman who saved her fellow Israelites by plying an invading Assyrian general with cheese and wine, only to behead him with is own sword once he fell into a glutinous sleep. Since Judith used cheese to help get the job done, eating dairy products at Hanukkah became the thing to do. Somehow, in the late Middle Ages, the story of Judith got mixed up with the true reason to celebrate Hanukkah, which was the victory in 165 B.C. of the Jewish Maccabees over the Syrian Greeks. Following their win, the Jews rededicated the Temple in Jerusalem and thanks, to a miracle, were able to make a day’s worth of sacred oil in the Temple menorah last for eight days. Because of this, foods cooked in oil became a big part of the Hanukkah celebrations. It only follows that a cheese latke fried in olive oil is a nice representation of two of the holiday’s symbolic foods.

Fast-forward a couple hundred years. Eastern Europeans have developed their own Hanukkah tradition of making latkes from either buckwheat or rye. Until a series of devastating grain crop failures due to bad weather and bad farming practices in the 1840s that is. People started planting potatoes to supplement their diets – they’re easy to grow and nutritious (high in vitamin C and potassium). As the vegetable gained popularity, the Ashkenazi Jews living under Tsarist rule in what is today Poland, Ukraine, and the Pale of Settlement (an area in western Russia where many Jews were forced to live) adapted their cuisine to include the tuber. Among these adaptations was a new latke recipe using potato instead of the traditional grains.

The fact that the potato gained such popularity is somewhat surprising given it’s history in Europe. They weren’t exactly well-received when they first arrived via the Spanish conquistadors returning from South America in the mid-1500s. While European nobility tried hard to get their subjects to grow and eat potatoes believing they were a good backup if wheat and the like failed (they were right!), was a tough sell. The peasantry didn’t trust the strange-looking, bland vegetable for much more than animal feed. Eventually, however, the potato caught on and would become a hugely important food source and take pride of place in many European cuisines by the end of the 19th century.

The continued popularity of the potato latke in the U.S., can be traced back to the influx of Ashkenazi Jews that started arrived in the 1880s. During the 40 years of heaviest immigration (1880s-1920s) more than 2 million Eastern European Jews came to America, bringing with them their potato latkes. With such large numbers ,their traditions soon became the norm for American Judaism. The delicious fried potato latke was here to stay.