The Long Shot: Building a Grass-Fed Lamb Operation from Scratch in Montana

Can a couple of idealistic urbanites build a thriving grass-fed lamb operation from scratch? Rich and Katy Harjes have moved mountains trying to find out. 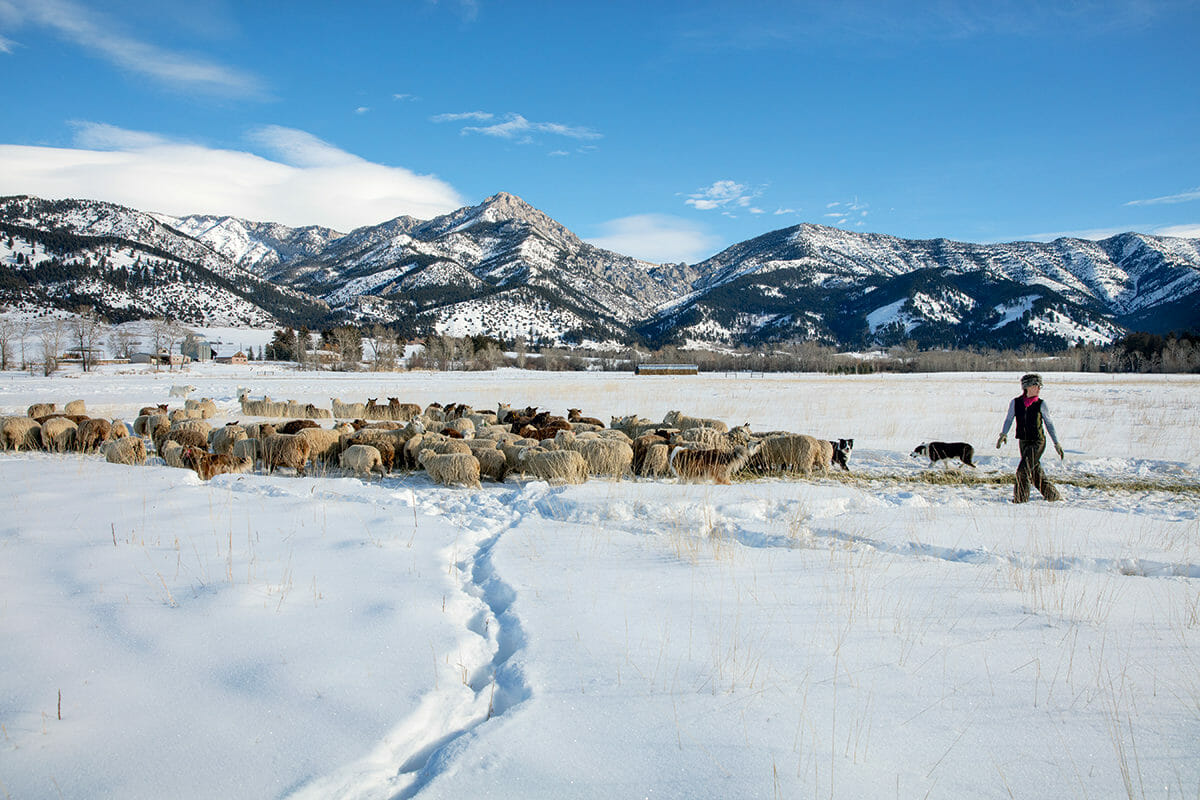 RICH HARJES was just 28 years old in 1989 when he received a diagnosis of stage 2 Hodgkin’s lymphoma and found himself forced to undergo major surgery and multiple rounds of radiation. “That kind of experience makes you a different person,” says Harjes, then a lecturer at the University of Arizona’s business school. “It pushed me to try new things. Anything outside my comfort zone suddenly became more interesting.” Embracing risk reaped major rewards for the numbers whiz, who parlayed an early mastery of computer-based statistical models into a lucrative investing career. By the time Harjes hit his mid-40s, he’d socked away enough money to begin plotting an early exit from the Chicago-based hedge fund Citadel – ultimately rolling the dice on a 170-acre ranch near Bozeman, Montana. “It was like putting a Monopoly piece on the board,” he recalls. His wife, Katy, proved more than game: “We both wanted whatever came next to be meaningful,” she says.

For the next few years, the couple toggled back and forth between the Wild West and the Windy City. While overseeing renovations on the property’s run-down farmhouse, Katy spent many a night alone on the ranch, bunking in a 1949 Westcraft travel trailer and burning through Michael Pollan’s The Omnivore’s Dilemma and Catherine Friend’s The Compassionate Carnivore. Katy, who worked at Bobby Flay’s Mesa Grill in Manhattan and briefly ran a California catering company, admits to “toying with the idea of becoming a vegetarian” before realizing that “we’re a meat-centric culture.” As she describes her aha moment: “If we’re going to eat domesticated animals, let’s at least give them happy, anxiety-free lives.”

Because the Harjeses’ ranch once housed sheep, Katy homed in on humanely raised lamb – a fantasy that collided with reality the instant a nearby farmer offered up 100 pregnant ewes in December 2008. “We so weren’t ready,” she says, laughing. Adds Rich, “It was Katy and me and no dogs and no help. She’d play the Border Collie, rushing out from behind a fence as I tried to steer our livestock.” The couple’s recently acquired flock rang in the new year outside, healthy, happy, and huge with future off-spring. The rookie ranchers, however, remember a rough January. “We cratered physically,” Rich says.”2009 nearly killed us.”

Luckily, the ewes’ previous owner took daily phone calls in stride. “I’d give this woman an ear-tag number, and she’d tell me everything about that sheep as an individual. Her knowledge was remarkable. That’s me now. I’m the town gossip,” says Katy of her role within the herd. “I know everybody’s business, and I have opinions about it, too.” 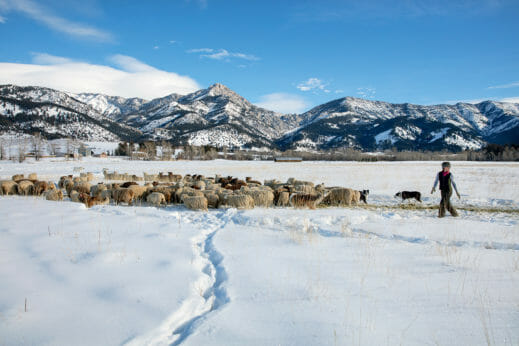 Katy Harjes of Willow Spring Ranch in Belgrade, MT, checks her sheep daily for signs of illness and injury. 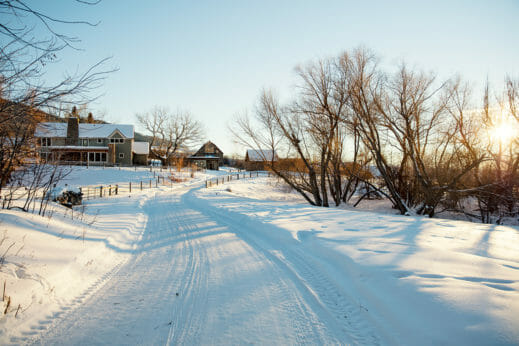 The ranch’s buildings consist of (from left): the residence, a greenhouse, a two-story barn, a garage, a workshop located in a restored log cabin, and the lambing barn. 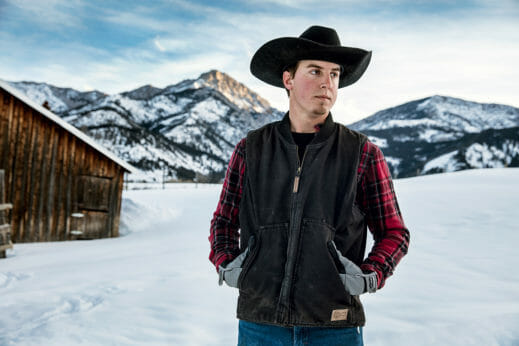 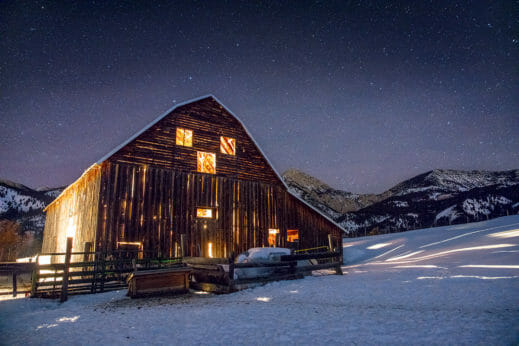 The two-story, metal-roof barn was built in the early 1900s. “There’s no light pollution here,” says Rich. “As long as the night sky is clear, the stars are brilliant.” 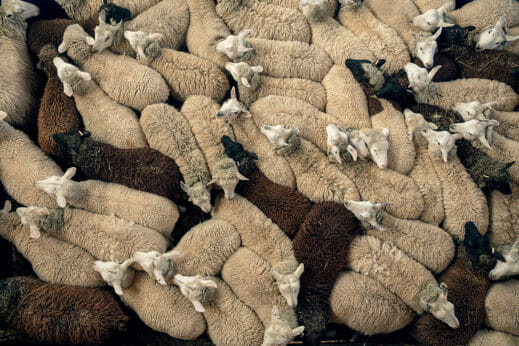 The Harjeses cross-breed their flock to encourage large, fast-growing lambs from ewes with strong maternal instincts and ample milk. 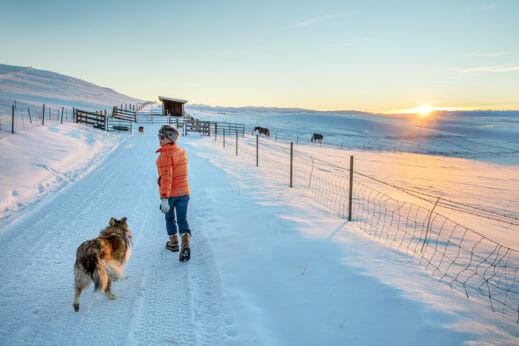 “He has the biggest heart,” Katy says of Osmond, a 4-year-old Rough Collie. “One of my friends calls him ’The Mayor’ because he’s so social, animated, and opinionated.”

If only animal welfare constituted the whole job. “Finding someone to process your meat represents a major hurdle. You have to schedule a year in advance,” recounts Katy, who scrambled to locate a replacement after one area butcher shut down. Then there’s the matter of creating a market for the meat. She collaborated with Bozeman chefs on lamb-centric menu ideas. “We scoured cookbooks in search of recipes,” says the 50-year-old of her mission to land restaurant accounts (the ranch currently claims eight). The city’s Community Food Co-op remains the Harjeses’ primary retail outlet.

Still, disappointments continued to mount. Katy hoped to sell the wool, too, and loved organizing enormous shearing celebrations for the community, preparing lamb lasagnas and stews. “I took such pride in making everything soulful. Picture a less-laborious barn raising.” Unable to unload much of the fiber – mills only buy white, dyeable fleece – Katy tinkered with rug-making and gave the rest away to friends as insulation for chicken coops.

Between 2012 and 2016, she and Rich expanded the business to encompass nearly 500 ewes and 23 rams, producing as many as 750 lambs annually. He also negotiated access to 2,800 additional acres. Three years into the agreement, having transitioned those pastures to meet organic standards, the Harjeses wound up evicted from the leased land a month short of lambing season. “It was devastating,” relays Katy. The couple decided to downsize, retaining just 50 ewes and 10 rams, and selling or auctioning off the rest. 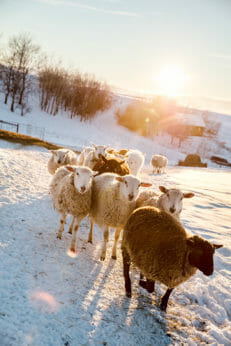 Apart from lambing season, when moms and babies hunker down in the barn, the mixed- breed herd lives outside year-round. 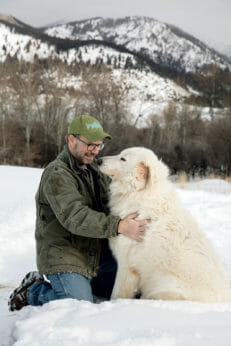 Rich Harjes greets Titus, one of the four Maremma sheepdogs who guard the flock from predators. 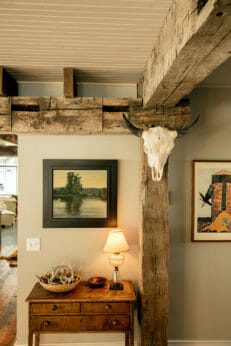 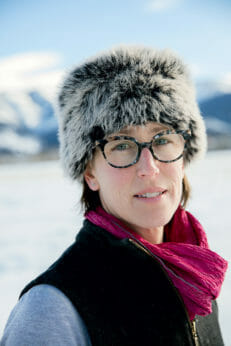 Before raising sheep, Katy worked in the restaurant business and owned a catering company. 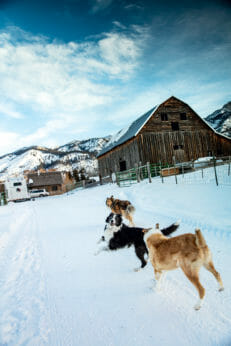 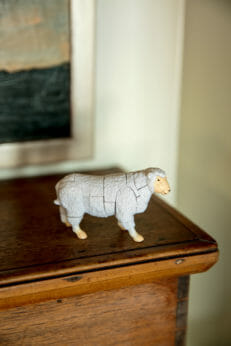 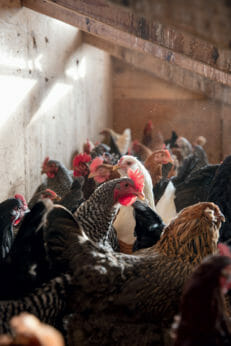 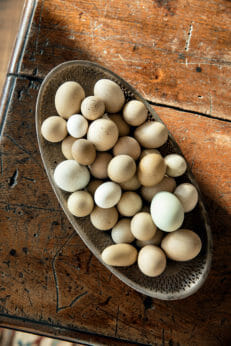 Blown eggs from the property’s chickens create an earthy display. 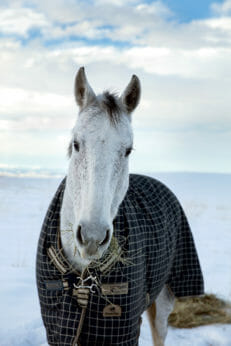 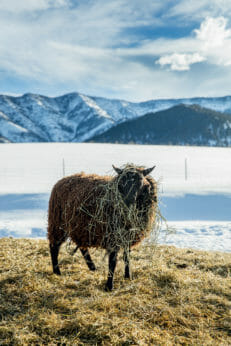 During the winter months, the herd has access to ample organic hay, much of it grown on-site.

Rich remains undaunted. “People told us we were absolutely crazy back at the beginning, and it was really, really hard, but this venture made me feel alive,” he explains. “Standing in the field – filthy, exhausted, and surrounded by animals as the sun sets – you almost have to sit down to take that in. Twenty minutes of awe erases a day’s rough labor. I still believe that a decade later.”

For Katy, the setbacks felt personal. “Rich and I are smart people. We worked our tails off. But we were only able to achieve a small profit. We didn’t look up or out for a long time.” When they finally did, their relationship had changed. Following nearly two decades together, they separated this past summer.

“We still talk,” says Rich, now 56, recounting how the two of them whiled away a September afternoon detangling the fur of a Maremma sheepdog. Offers Katy: “We poured our hearts into something bigger than us. It’s like having a child.” The duo’s commitment to their animals endures, “no matter what happens to me and Katy,” per Rich.

Katy posits that sorrow has always been part of the bargain. “Each time I deliver lambs to the slaughterhouse, there might be one in the group I recognize. Rich and I had a white sheep with one black leg. We called her Peg. She had brown eyes. Seeing an animal you love moments before her death is heartbreaking. The day I’m not impacted by this is the day I should stop raising livestock for meat. So I spend a few moments saying ‘Thank you’ and ‘Good-bye.’”