How Elysian Brewing Company Turns a 1,790-Pound Pumpkin Into a Keg

And is this insane thing really a pumpkin? 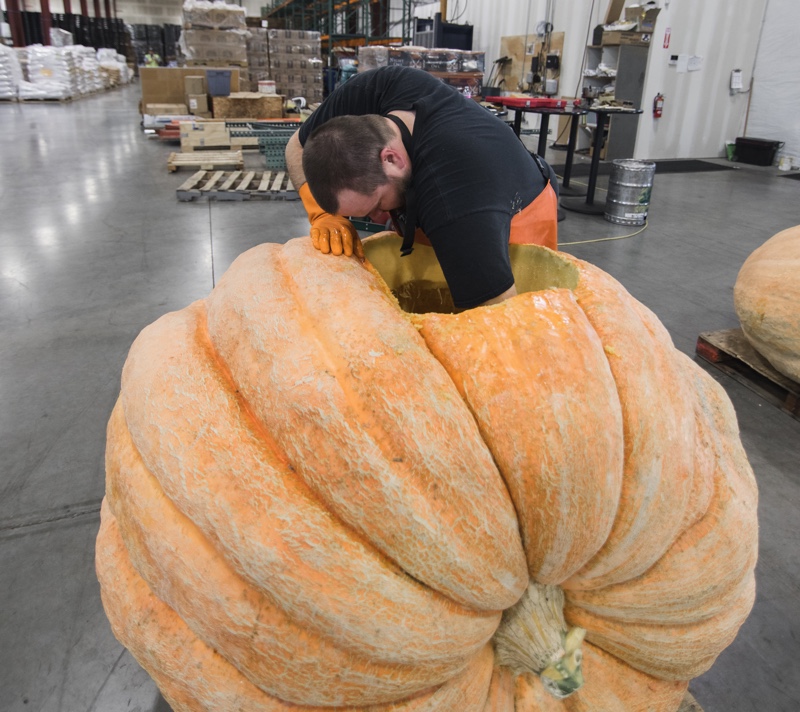 A whopping 50 breweries, mostly from the western United States, treked to the Seattle Center, just north of Pike Place Market, to participate in the festival, which spanned the last two weekends of September. The festival has all your normal fall activities – carving stations, food trucks, costume competitions, and such. But the highlight? A giant pumpin keg. Each year, Seattle-based Elysian Brewing Company takes an insanely huge pumpkin and turns it into a keg for one of their dozen-plus pumpkin beers. (This year, their selection included Hi-P, a hibiscus-pumpkin blend; Night Owl ale; One-Eye Jackie pumpkin wheatwine; and Crust Punk pumpkin kvass.)

The chosen pumpkin was a 1,790-pound monster provided by Joel Holland, a local farmer who grew it specifically for the festival. We got the chance to talk with Holland, and the first question was obvious: what exactly are these insane, jumbo-sized things?

It turns out that “pumpkin” is not a strict categorization – it’s more like a loose description of a squash, and most squash are just variants of one species, Cucurbita pepo, that’s been selectively bred to have thousands of different shapes and colors. That one species includes such seemingly unrelated varieties as zucchini, sugar baby pumpkins, and pattypan squash. All the same species! The Atlantic Giant pumpkin, which is what the keg was made from, Holland told me, is also a member of this tribe.

To call a squash a pumpkin, it has to be a hard fall or winter squash with a generally round shape and an orange, cream, or white color. But there’s also the stem to examine. “Squash are said to have a softer, round stem. Under this definition, the Atlantic giant would be a squash. One obvious problem with this logic is to examine a zucchini, which has a hard 5 sided stem, but is universally called a squash,” wrote Holland in an email. 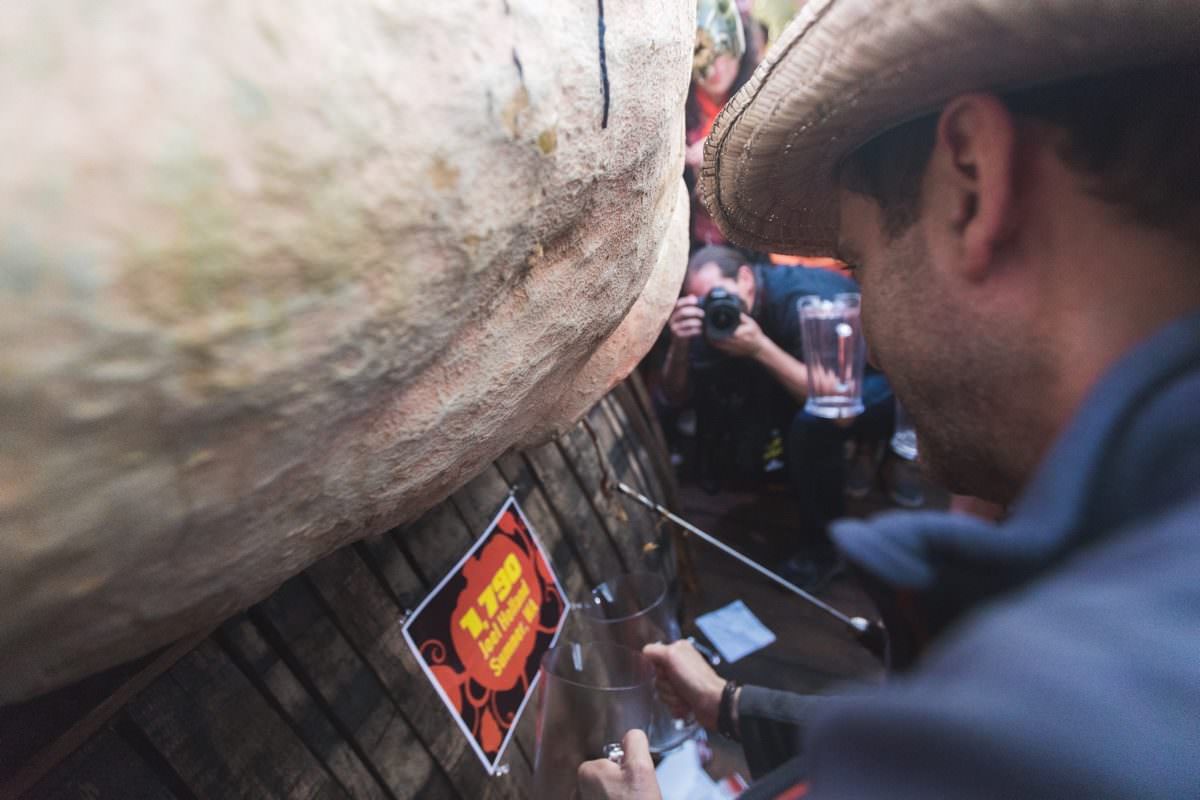 The Atlantic Giant dates back to one prize-winning squash in the early 1980s, but growers have figured out all kinds of ways to encourage this crazy squash to grow ever faster, bigger, and heavier. Fungal treatments to encourage more nutrient intake, covering them with a protective blanket at night – giant pumpkin farmers will try anything.

The other thing about this particular crop is that it’s not good for eating. At all. Holland describes the flavor as “insipid,” noting that the Atlantic Giant is an especially bland variety. It is grown almost exclusively for competitions, and it’s not cheap to do that. “The Atlantic Giant is a large plant. Most growers allow 600 to 1,000 sq. ft. per plant,” says Holland.”The time, effort, and expense lavished on these giants would not be cost effective for most other crops.”

Making your own pumpkin keg out of a typical pumpkin is not particularly hard; you simply cut off the top, scrape out the guts and seeds, cut a small hole a few inches from the base to insert a tap, then fill with beer. But that same process with a pumpkin that weighs nearly a ton is a bit harder. For one thing, a forklift is needed just to move the beast. After that, the Elysian team uses a Sawzall, a drill, and a cutting torch to blast through the wall of the pumpkin, which can be up to 16 inches thick. The lid alone, says Dan-o Beyer, the cellarmaster at Elysian, can be 80 pounds in weight. Scraping the inside is also difficult; the person doing the work has to go head-first into the pumpkin from the top to get the job done. Beyer says they usually pull about 15 to 20 gallons of guts out of one of these pumpkins.

“The very first time we created a pumpkin keg, we noticed an unmistakable, raw pumpkin taste that distracted from the flavor of the beer,” says Beyer. After that, they started blowtorching the inside of the pumpkin to remove some of that raw squash taste. There’s also a danger of cracking or splitting; as these pumpkins get bigger, they can hold more beer, but the greater weight of beer can also make them vulnerable to splitting. This year, Beyer says they used four kegs worth of beer – almost 250 gallons. 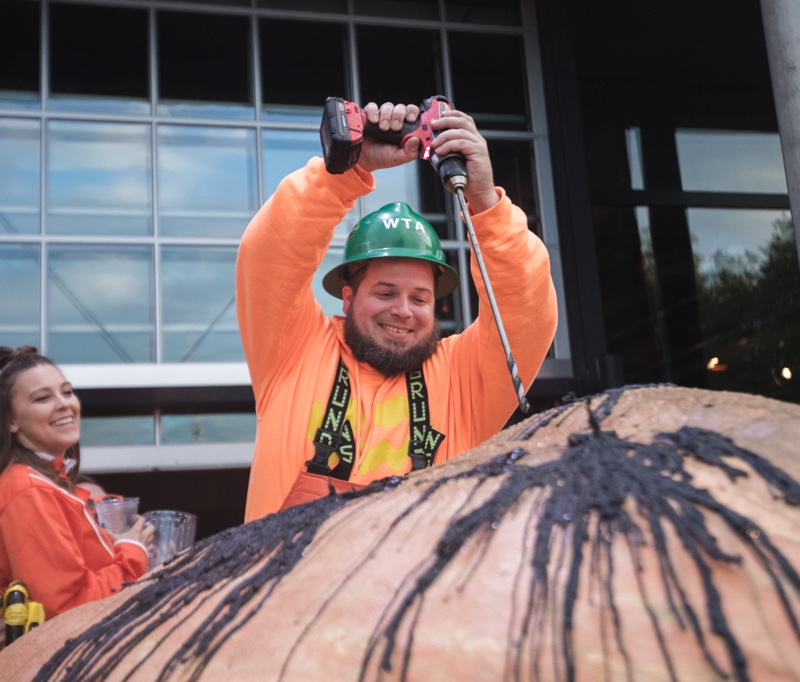 But after all that, the end product is worth it, both for fun and flavor. Pumpkin, says Joe Bisacca, the co-founder and CEO of Elysian Brewing, is a natural flavor match with beer. “Produce for me has always been part of the brewing process. Hops themselves are vegetal. Think of the base flavors – hops add spiciness, pine, floral, and citrus flavors and smells. So does produce. Pumpkin fills a malt flavor characteristic,” he says. Oh, and if you’re wondering: his pumpkin beer is brewed with actual pumpkin, unlike “pumpkin spice” products which are merely prepared with the spices used in a pumpkin pie.