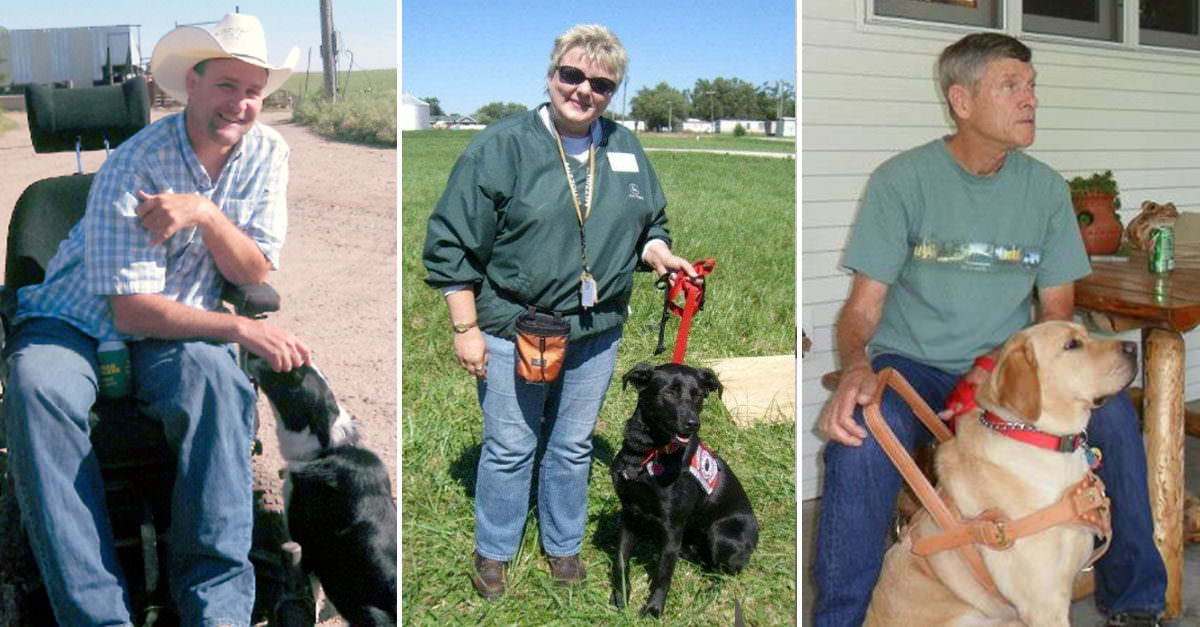 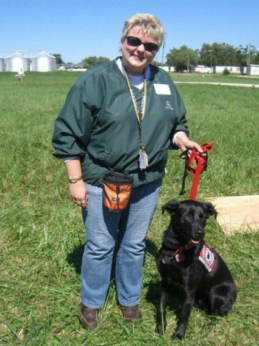 Jackie Allenbrand first conceived of PHARM Dog USA – the acronym stands for Pets Helping Agriculture in Rural Missouri, though the company isn’t constrained to the state – in 2005, at a farm show. There she met a farmer with a story: “He had a partial leg amputation, and he was telling me about his Border Collie named Weasel,” says Allenbrand. “He said, ‘I can send Weasel out to get my cattle and all I have to do is sit at the gate and close it behind me, and that really saves me a lot of time.'” Allenbrand, a cattle farmer in northern Missouri, near the Iowa border, suddenly realized that farm dogs had so much more potential. Seven years later, in 2012, Allenbrand started PHARM Dog USA, the only non-profit in the US dedicated to training dogs to assist disabled farmers.

“I always had a knack with dogs,” says Allenbrand. She’s had grown up with the animals and has always had farm dogs as an adult, but it wasn’t until 2005 that the idea for PHARM Dog USA began to crystallize. That year, Allenbrand was working for Missouri University’s chapter of AgrAbility, a USDA program associated with universities all over the country dedicated to coming up with ways to help disabled members of the agricultural community. At first, she ran PHARM Dog USA within AgrAbility, but in 2012, Allenbrand set off on her own and began operating PHARM Dog USA as a standalone nonprofit. (She says this is because only then did she have enough time to dedicate to running the program.)

Allenbrand runs the whole operation, connecting with breeders, trainers, and shelters, and working with clients, most of whom find her through word-of-mouth. She isn’t certified as a trainer, though she certainly helps out when she can. Instead, she’s more of a facilitator.

PHARM’s dogs come in two main categories: herding dogs (usually Border Collies), and service dogs (usually Labradors or Lab-mixes). But off-the-shelf, so to speak, herding and/or service dogs wouldn’t really work for disabled farmers; herding dogs have to be trained to work around specific disabilities, and service dogs have to be trained to work on a farm. That means that, no matter what, PHARM’s dogs are custom-trained for each individual client. It can be expensive and time-consuming – each dog can take up to two years and several thousand dollars to train. But for her farmers, it’s worth it.

PHARM’s Border Collies come from a sympathetic breeder in Plattsburg, Missouri, who donates puppies and even some training for the program. The service dogs largely come from the Greater Dayton Labrador Retriever Rescue shelter in Ohio. The service dogs are trained in basic service skills at the shelter, and then are specially trained by certified trainers to perform the duties needed by each individual client. “Help a dog, help a farmer,” says Allenbrand. 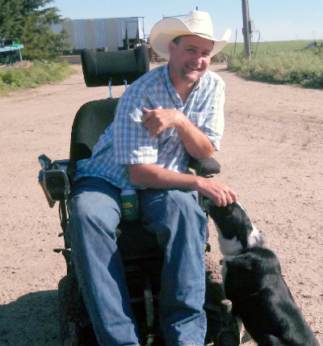 This is Duke with his owner, Troy. Duke’s duties include helping Troy sort and load cattle at the 1200 head heifer development operation where Troy works. Duke, formerly homeless, was donated by a kind family that he followed home while they were out for a walk. Photo: pharmdog.org

One farmer, Alda Owen, is legally blind. She works with cattle, but was once knocked over by a bull – an incredibly dangerous experience. Now she has a Border Collie named Sweet Baby Jo who’s able to herd to verbal commands like other herding dogs, but is also trained to alert Alda if any cattle come too close to her. Or take Bruce Trammell, who suffered a traumatic brain injury. His lab, Odie, is trained to help Bruce cope with his new lack of balance. Odie, a large dog, knows to stick close to his master and can be a counterbalance if Bruce starts to fall. Odie is also trained to pick up tools, gloves, buckets, and even Bruce’s cell phone – anything he points a laser-pointer at.

These tasks aren’t necessarily that far removed from what other service and farm dogs can do; PHARM doesn’t have any magical abilities to train a Labrador retriever to operate a threshing machine. But set up as a non-profit, specifically targeting farmers, sets the company apart. Many farmers are notoriously unwilling to seek assistance like therapy and counseling; this is one of the reasons for the industry’s high suicide rates. But as a farmer herself, Allenbrand has come up with a non-threatening way to help those who need it. After all, many farmers are perfectly used to having a farm dog. So why not get one who’s specially trained to help in other ways, too?

For more information on PHARM Dog USA, or to donate, visit pharmdog.org.