Pulling milk carts, herding reindeer, and more. These dogs have jobs that go beyond the farms. 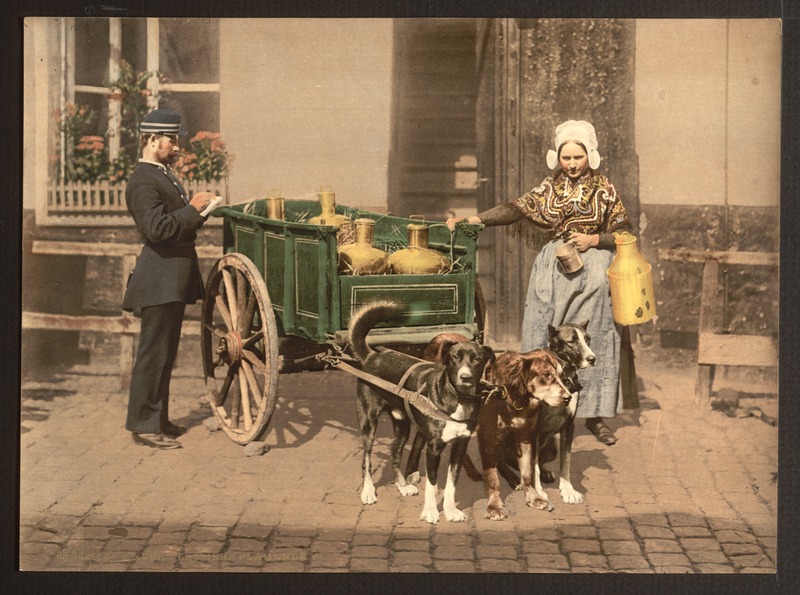 Milk carts pulled by dogs? It happened - until it was outlawed as cruel.
Photography Wikimedia Commons
Share
Tweet
Pin
Email 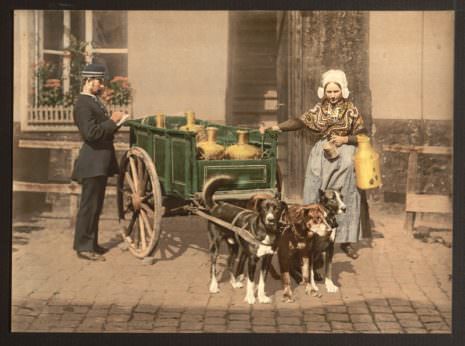 Up until the end of the 19th century in Europe, especially Belgium, France, Germany, and the Netherlands, dogs were commonly used by farmers to pull small carts full of milk from the country to the city in order to sell it on the street. The animals were also used to haul vegetable and bread carts, and other goods. The practice was banned in England in the mid-1800s as cruel. Around 190o, in Germany, dogs began being replaced by donkeys for this type of work. 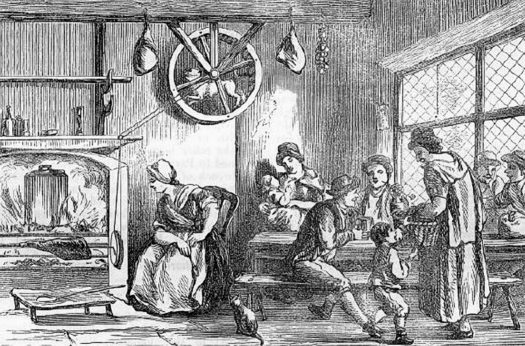 Back in the day – way back in the day – from the 16th through the 19th centuries, farm dogs had a laundry list of crappy jobs to do, but perhaps the most tedious involved walking for long periods on a hamster wheel-like device that turned a spit used for roasting meat. In England the practice was so common that a special breed was developed to handle this duty: a turnspit dog. Turnspits were short and stocky, with the head of a pit bull and the body of a basset hound. Turnspits were also used in colonial America, but not as much as in the old country. The breed eventually died out around 1900 with the invention of a mechanized spit turner. It didn’t help that the breed was on the unattractive side and had a surly disposition (wouldn’t you, too, with a job like that?). 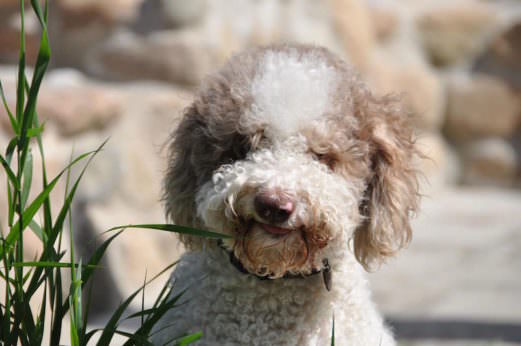 For hundreds of years, hunting for truffles – those hard-to-find, very expensive, and pungently-delicious fungi used in Italian and French cooking – was the purview of the pig. But dogs, specifically the Lagotto Romagnolo, an Italian breed with an epically cute face (kind of Teddy bear-ish) that was originally bred for hunting, eventually made inroads into the profession. (Meet Red, one of the Fall 2017 cover story dogs – he’s a Lagotto Romagnolo who truffle hunts!) While pigs are born with the ability and desire to search truffles out, they also love to chow down on them. Dogs, on the other hand, need to be trained to hunt truffles, but aren’t inclined to eat them. Truffles grow underground off of the roots of several types of trees, including beech and oak, in parts of Europe and North America and can sell for as much as $2000 a pound for the super rare white Alba truffle. While the Lagotto Romagnolo is the preferred truffle hunter in Italy, any dog with a great sense of smell and willingness to learn can do the job. There are beagles and springer spaniels can also be quite good at sniffing out these culinary jewels, too. 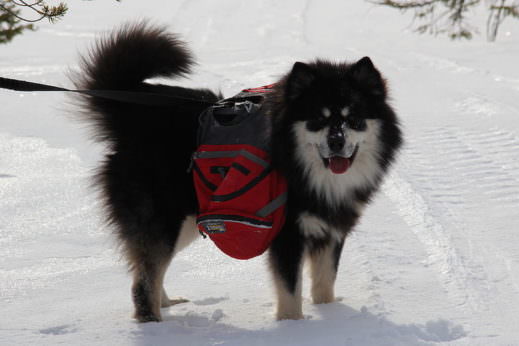 On Donner, on Blitzen, on Fido? We’re all aware of Santa Claus and his famous reindeer, but less known are the dogs used to herd those reindeer – or, more specifically, their non-fictional (sorry, kids!) counterparts on earth. The Lapinkoira AKA Finnish Lapphund dogs – a Spitz-type breed – are used by the Sami people of Scandinavia to help herd and watch over their reindeer. These indigenous people live north of the Arctic Circle and raise reindeer for their meat and hides. They’ve been using Lapinkoira for generations and thanks to the dog’s thick coats and strong work ethic they’re up to the task.