Truffle Hunting Has Gone to the Dogs

Want to find a good truffle? Find yourself a good dog. 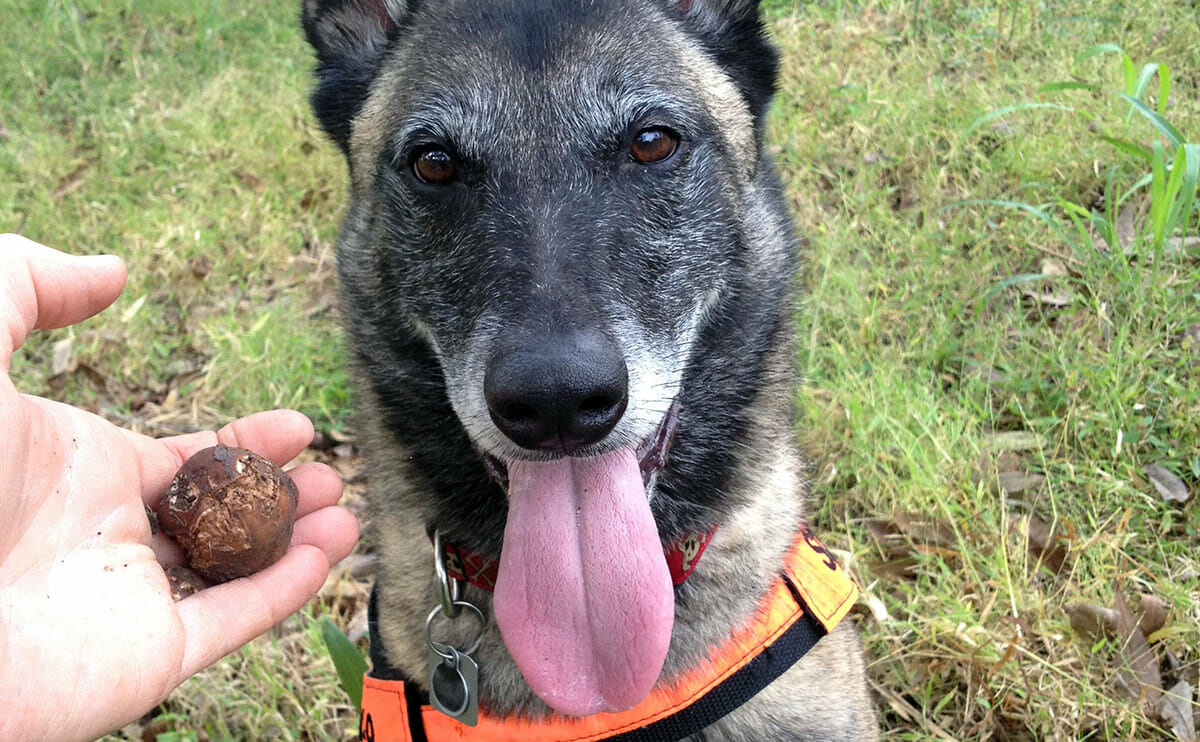 It’s hard to find a crop more valuable than truffles – prices can go as high as $2,000 per pound for ultra-rare white Alba truffles. The problem is that they grow underground, attached to the roots of trees. To find them, truffle hunters traditionally used pigs, whose natural instinct for rooting behavior helped hunters locate the fancy fungi.

But in reality, pigs have long been out of favor for hunting truffles. Replacing them? The truffle dog. And in Oregon, the truffle-hunting dog scene has absolutely exploded.

Charles Lefevre, president and founder of New World Truffieres and organizer of the annual Oregon Truffle Festival, points out multiple reasons why dogs have surpassed pigs. One, they have more stamina than your average porker. Two, they’re easier to train. Three, dogs are much less likely to try to eat the truffle once they find it. You don’t want to wrestle with a 300-pound hog when it’s interested in chowing down on a truffle. “The lore,” says Lefevre, “is that truffle hunters that use pigs don’t tend to have all their fingers.”

“The lore is that truffle hunters that use pigs don’t tend to have all their fingers.”

But the real competitive advantage for canines lies in truffle hunting’s furtive nature. Truffle harvesting grounds are carefully kept secrets, with hunters being wildly protective of their turf. “If you have a pig on a leash, everyone knows what you’re doing,” says Lefevre. But if you spot someone with a pooch on a leash, they could just be enjoying some fresh country air.

There is, of course, one thing pigs do have over dogs: They don’t need any training to find truffles. Dogs need a little help.

Which is where guys like Glenn Martyn step in. Martyn, who has trained dogs since 1966, has helped mold canines into everything from bomb and drug-sniffing dogs to canines employed by saw mills to detect smoldering woodchip fires before they break out into full-on infernos. It’s only been in recent years that he’s branched out into truffle dog work, but he finds the principles are much the same.

“The truffle, per se, is not something a dog would naturally search for on its own,” says Martyn. “The truffle has to have some association with something. For most dogs, that positive association is food, and once a dog learns the truffle smell means food, they’ll do whatever it takes to find that truffle smell.” (Other reward methods besides food can work too – a game of tug-of-war, a favorite toy, even just the act of digging can be enough to motivate a dog. Marytn’s truffle dog Ghillie, a 5-year-old English Springer Spaniel, is rewarded by a game of fetch.)

In practice, this means first coating an item in truffle oil and having the dog find it. Then the item is buried under leaves, then rocks, and then actual soil. Eventually an actual ripe truffle is introduced. Et voila: You have a truffle-hunting dog.

The work is a natural fit for dogs and handlers who have been trained in another canine art form: search and rescue. Truffle dog owner Deb Walker spent 12 years training and working with search-and-rescue animals. The thrill of finding someone lost in the wilderness was hard to match, but the lifestyle was rough. “Most of the call-outs are 10:00 or 11:00 pm on a Sunday night. You grab your gear and your dog, and you drive a couple of hours,” Walker says. “You search until five in the morning and you’re exhausted and maybe you find someone. Or you don’t.”

As retirement loomed, Walker began to think of ways to spend her time that didn’t involve late nights and very early mornings. A friend’s suggestion led her into truffle hunting, and Deb now spends her days searching for white and black Oregon truffles through 8,000 acres of timberland with her standard poodle, Tucker. (Tucker’s reward for finding a ripe truffle: a favorite blue rubber ball.)

Walker currently keeps the truffles for herself and friends, as well as for training other truffle-hunting dogs. Her husband, meanwhile, has become quite adept at turning her fresh treasures into truffle oil, but they’re waiting to jump through a few more regulatory loopholes before they begin selling to the public. When they do, the planned name is Tucker’s Truffle Oil.

When reached by phone early one morning, Kris Jacobson is still buzzing from last night’s haul: six very rare Oregon brown truffles. “I just found one all of last season,” she says. Jacobson worked as a police officer for 19 years, including some time as a K9 cop. During her years on the force, she fell in love with Belgian Malinois dogs, an athletic, intelligent breed highly prized by the military.

As retirement neared, she bought a Belgian Malinois puppy, Ilsa. Ilsa and Jacobson originally set out on the competitive Frisbee dog circuit, but a knee injury sidelined the dog. Casting about for other activities, Jacobson entered Ilsa into competitive scenting contests, where dogs attempt to find certain types of essential oils. Ilsa was enjoying herself, but Jacobson wanted more of challenge. Enter truffle hunting.

Ilsa, it turned out, was something of a truffle-hunting prodigy. “I don’t mean to brag,” says Jacobson, “but she’s rather special.” Ilsa, now six-and-half-years old, found a wild truffle 24 hours after scenting her first one in training. She also made the New York Times when she discovered the first cultivated Black Perignon truffle, giving hope that Oregon’s cultivated truffle industry could one day take off. “They said it couldn’t be done,” says Jacobson. “I mean, wow. When we found it – that was probably the highlight of our career.”

Jacobson has a small side business at Umami Truffle Dogs selling truffles to chefs and wholesalers, but Jacobson’s real passion is taking clients out into the woods with Ilsa to hunt for truffles – which the paying customer gets to keep. “There’s this magic that happens between a truffle dog and their handler,” says Jacobson. “I take it for granted because in a season we’ll find 1,000 truffles, but when I have someone who’s coming along for the first time, I relive that newfound discovery through them.”

Wondering if that pooch laying around your house would be up for finding truffles? Charles Lefevre and the Oregon Truffle Festival hold an annual truffle dog seminar each January (there’s 20 open slots this year, up from 12 when the seminar started in 2008), where trainers like Glenn Martyn and Deb Walker will take Fido through the paces. Day one is spent getting the dogs acclimated to the scent of truffles, and day two sees the hounds heading out into the field to find real, honest-to-God truffles.

“About three quarters of the dogs find a truffle,” says Lefevre. For dog lovers who like truffles, or truffle lovers who happen to own a dog, you gotta like those odds.

I’ve read that these dogs have muzzles put on them so they don’t eat the truffles and that some owners never let them out of their cages except to work, is this true ? I would hate to see this become another way an industry abuses animals.