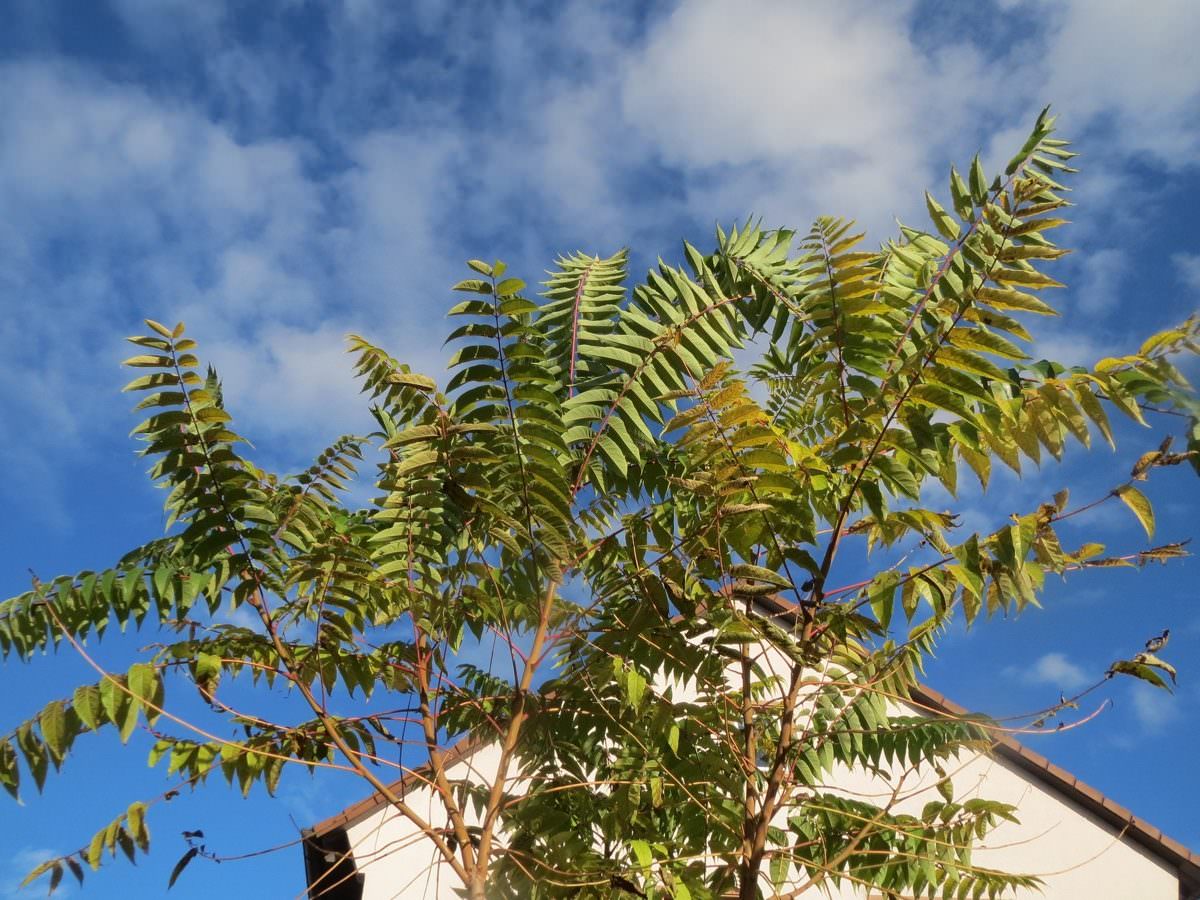 In a new study, researchers from Penn State have uncovered exactly how dangerous Ailanthus is, calling it an invasive triple threat. But what is this weird tree?

Native to much of China, Ailanthus – we’re using the Linnaean rather than the common name “tree of heaven” because, given the research, that name seems misleadingly optimistic – is prized there for its use in traditional Chinese medicine, as well as for the fact that it houses a productive species of silk moth. But after it was brought to Western Europe, North America, Australia, and New Zealand, it began showing its true colors as an incredibly invasive species in its new environments.

A fairly large tree, reaching up to 90 feet in height, Ailanthus can be recognized by its distinctive large, oblong, tear-shaped leaves, as well as by the foul odor the male flowers emit. But it’s also incredibly hardy: one of the fastest-growing trees in North America, it is also, according to this new study, lives longer than previously thought, with some trees reaching more than 100 years old.

It has shown the ability to grow almost anywhere; the book A Tree Grows In Brooklyn concerns an Ailanthus, using its ability to thrive in cement or garbage, with poor soil, poor light, and poor water supply, as a metaphor. If you cut it down, it’ll regrow from its own roots. It also blocks out native plants, altering local ecosystems, partly because it grows so fast and efficiently, and partly because it is allelopathic, meaning that it produces chemicals that inhibit the growth of nearby plants. It isn’t content to just box out native plants; it cheats.

The craziest thing about Ailanthus, however, is how fertile it is. The study found that over the course of a 100-year-old Ailanthus‘s life, it produces about 52 million seeds. That’s much more than other highly productive trees, like maples and oaks. Even a productive oak tree, for example, is unlikely to produce more than 10 million acorns over its lifespan. And oak trees can take decades before they’re mature enough to produce acorns, unlike Ailanthus, which produces seeds within a few years – and what makes Ailanthus so dangerous is how viable its seeds are.

The basic number of seeds a tree produces isn’t the whole story. Many are eaten by animals, of course, or wind up in a place where they can’t take root; even under good conditions, only a small percentage of most tree seeds are viable. The tulip poplar’s seeds only have about a 9 percent viability rate.

The youngest tree in the Penn State study, at 7 years old, produced seeds with a whopping 78 percent viability rate. Yes, younger trees produce more viable seeds, but get this: even a 104-year-old tree showed a viability rate of 66 percent. These are crazy numbers, and alarming for ecologists.

The researchers, armed with more information about Ailanthus, will next investigate some potential ways to curb its growth. Currently, there are no easy options; some solutions involve hacking notches into the trunk with a machete before applying herbicide, or pulling out the entire root system of younger trees. With any luck, a better solution is forthcoming.

wonder if burning the root would curtail its regeneration? serious question

Great article. I just saw this in Athens, Greece. They will stop at nothing!

Whoever assigned its scientific name, specifically the genus, essentially dubbed this species “tree of heaven” by naming it Ailanthus. According to a post about this species on Wikipedia, Ailanthus was dubbed “tree of heaven” because it grows so tall and so quickly, and the trees viewed as stretching their way up to heaven. And the genus name was derived from the Ambonese (an Indonesian ethnic group) word ailanto, meaning “heaven-tree” or “tree reaching for the sky,” according to information on Wikipedia. This has nothing to do with anyone’s view that it was “heavenly” in a positive sense! People have been… Read more »