When a chef and a gardener sprang for seven acres in Pennsylvania, the couple figured they'd slowly acquire animals and plant seeds. Then, a twist of fate forced them to become full-time farmers. 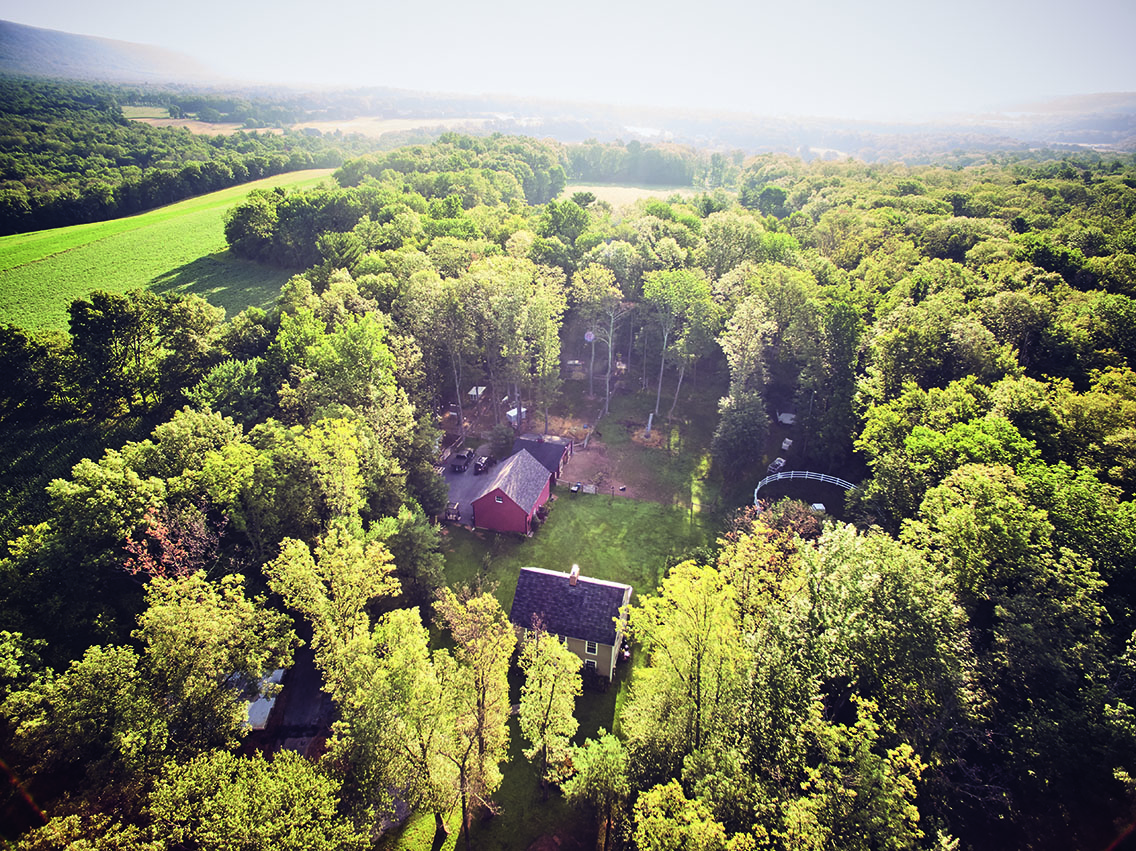 IN 2013, Christin Gangi and Allan Schanbacher put a significant chunk of their savings toward the purchase of seven acres in northeastern Pennsylvania. Situated amid the foothills of the Blue Ridge Mountains, the property appealed to the couple more for what it lacked than what it offered: namely, zero landscaping, aside from two tiny boxwoods flanking the front door of a basic clapboard house. Upon this blank slate, Gangi and Schanbacher were able to project their every agricultural fantasy: apple and peach orchards, chicken coops, a horse barn, maybe even a riding ring one day. “Our intention,” Gangi recalls, “had been for Allan to set up the farm slowly while I kept my job and brought in money.” But two years later, he found himself unceremoniously dumped as creative director of Rodale’s Organic Life magazine. Suddenly, the back-to-the-land stuff of glossy layouts became his full-time living.

It would be a mistake, however, to characterize either man as a wide-eyed naÁ¯f. Gangi, 55, who also lists Garden Design and Organic Gardening magazines on his résumé, has been digging in the dirt for decades and often lapses into fluent botanical Latin. His husband, Schanbacher, grew up on a farm in Oklahoma before cooking in the New York City kitchens of Sarabeth Levine and Eli Zabar, both known for their insistence on ingredient integrity. “Everything Allan and I have been doing for the last 30 years had prepared us for this,” says Gangi.

Christin Gangi falls into a funk whenever a horse or donkey dies. To insulate himself, the gentle gardener says he makes “an effort not to get attached to the meat birds.”

“When it comes to nature,” he adds, “you learn very quickly that you can work with it, but you can’t make it do anything that it’s not supposed to do.” So rather than force a strict business plan onto this particular site, he and Schanbacher, 52, adopted a trial-and-error approach. Though Gangi dreamed of fruit trees, he pivoted the moment his shovel hit shale, shifting the focus to organic vegetables in raised beds that grant control over soil quality. Last year’s corn crop, he admits, “was just stupid, since I don’t have the space, and people around us can do it more economically.” The peppers, on the other hand, will be planted more plentifully, since Schanbacher’s hot sauce proved to be a hit on their site.

As for Schanbacher: Fresh eggs topped the chef’s initial wish list, but not long after buying six common Rhode Island Reds, he developed a collector’s zeal for the speckled blue shells laid by Easter Egger and Araucana hens. He acquired meat birds, too, again refining his taste and transitioning from big grocery store chickens to smaller, more tender Red Rangers – a choice that earned him a following among area restaurateurs who value more than price per pound. 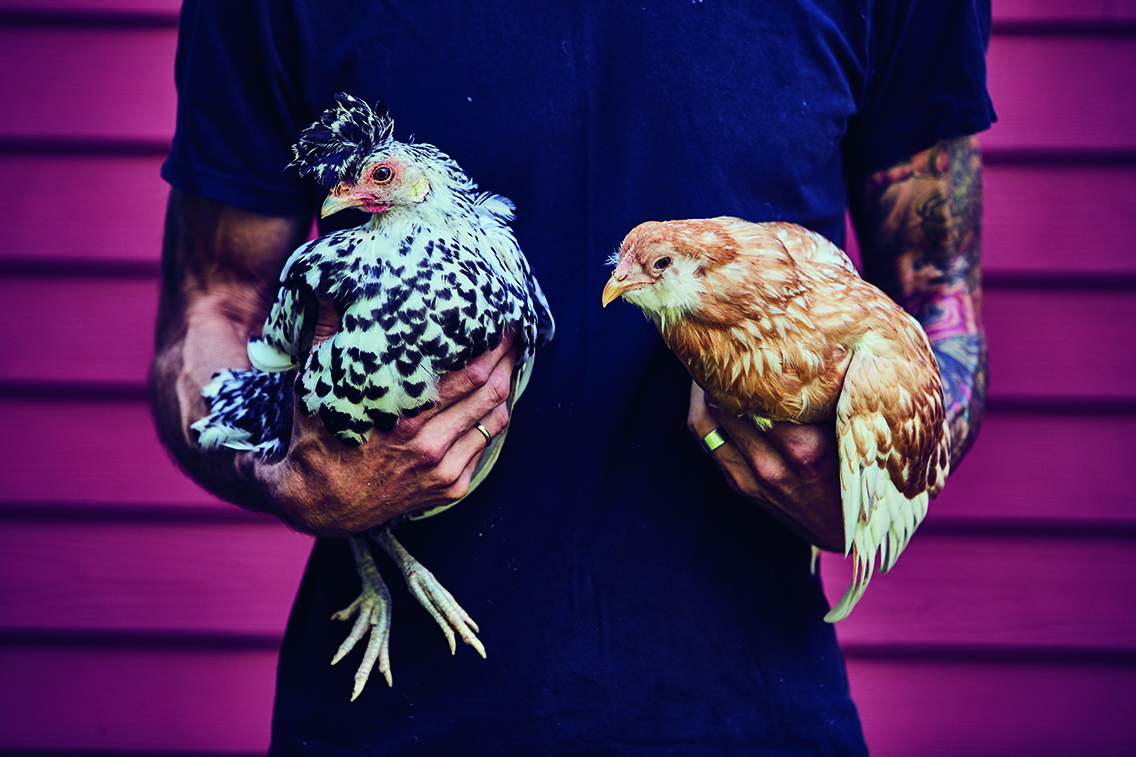 Products, not produce, will lead to profitability, the farmers believe, so they’re concentrating on pickles, jams, kimchi, and preserved egg yolks. Schanbacher is also developing an aged hard cheese that capitalizes on milk from the farm’s mixed Swiss-breed dairy goats.

The pragmatic farm boy tends to view livestock in terms of output – be it specialty meat, milk, or eggs – whereas tenderhearted Gangi accumulates quixotic pets, including an abandoned 27-year-old draft horse and a pregnant donkey named Pearl, invariably falling into a funk whenever a creature dies. To insulate himself, the gentle gardener makes “an effort not to get attached to the meat birds.” This leaves Schanbacher to point out that they’re running a business, after all, and have just enough money to tide them over for a few more years. 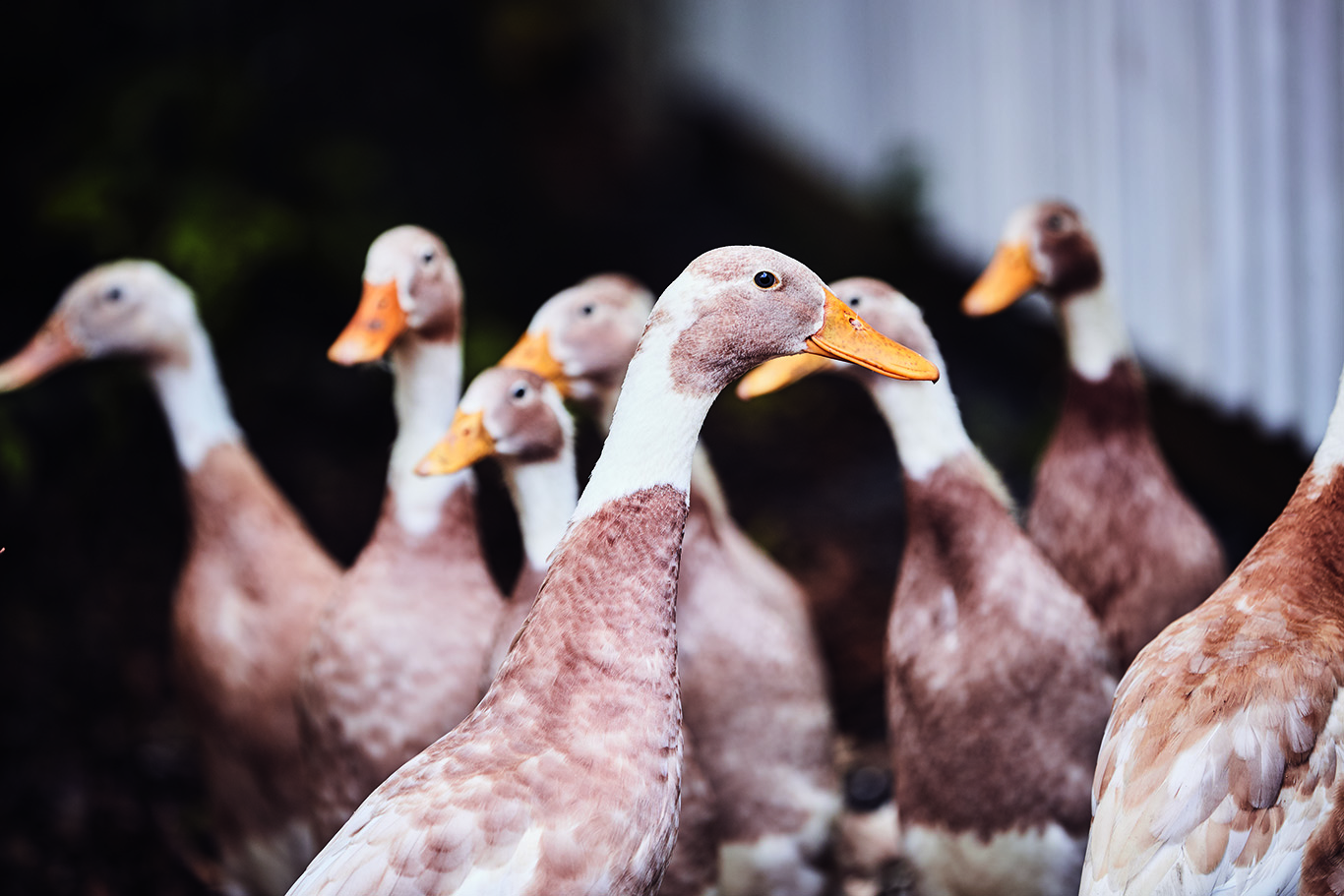 The couple is currently tinkering with the idea of agritourism at Kreeky Tree Farm, named for the sound the surrounding oaks make when the winter wind blows. Last fall, they constructed a two-level studio and commercial kitchen, with an eye toward hosting weddings and farm visits as well as cooking classes. “You’d be surprised how many people don’t know how to roast a chicken or make a good stock,” Schanbacher says. (article continued below, after gallery) 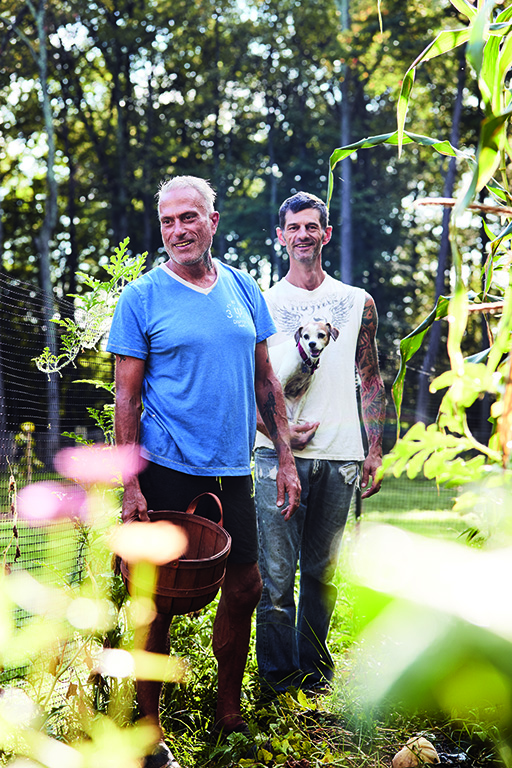 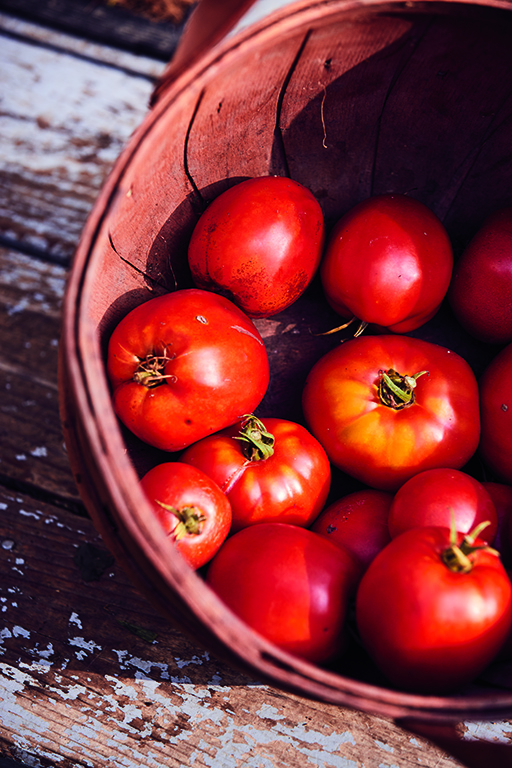 ‘Rutgers’ tomatoes were developed at Rutgers University in the 1930s. 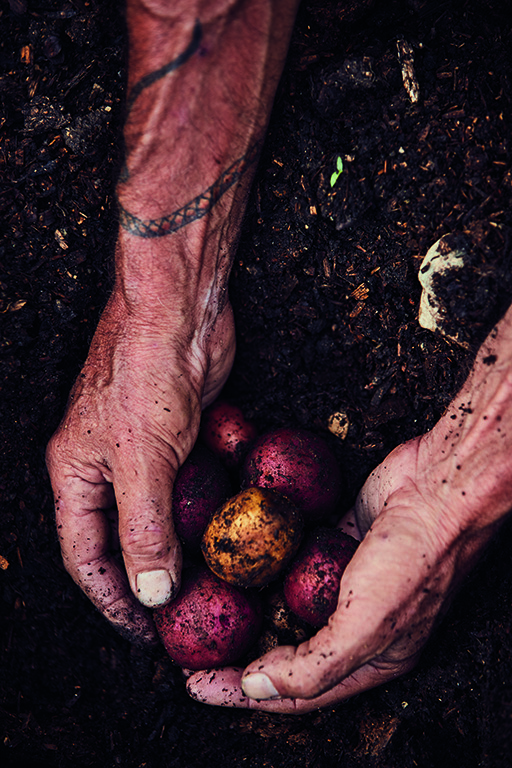 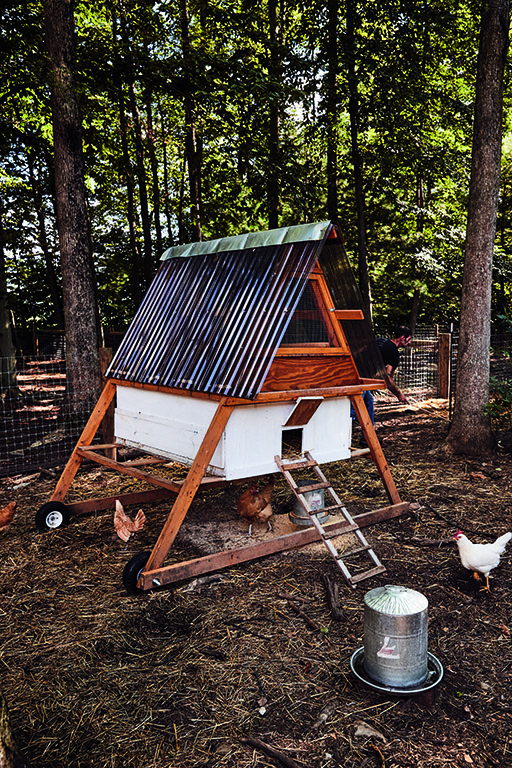 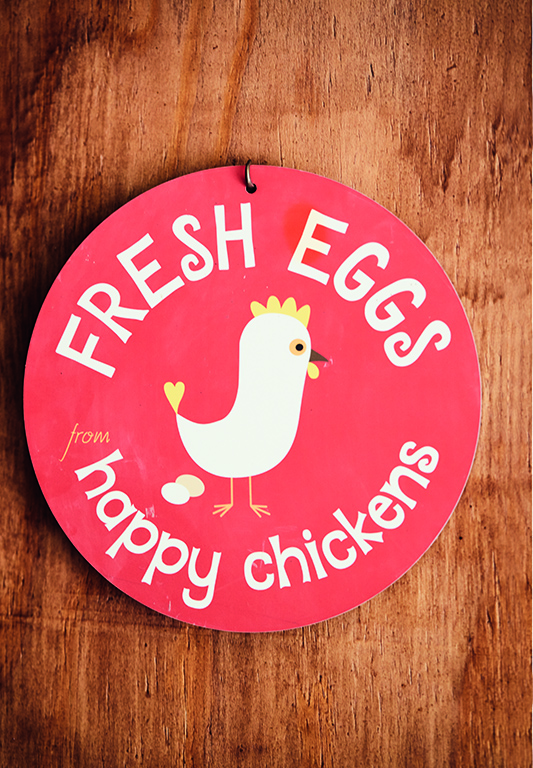 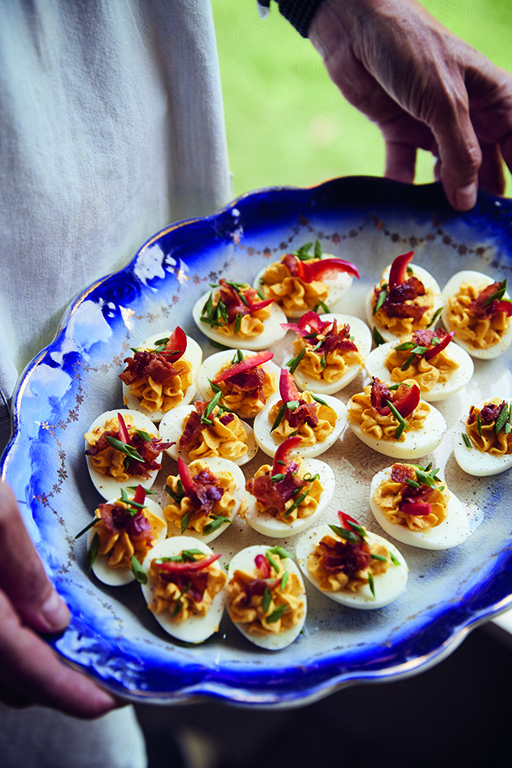 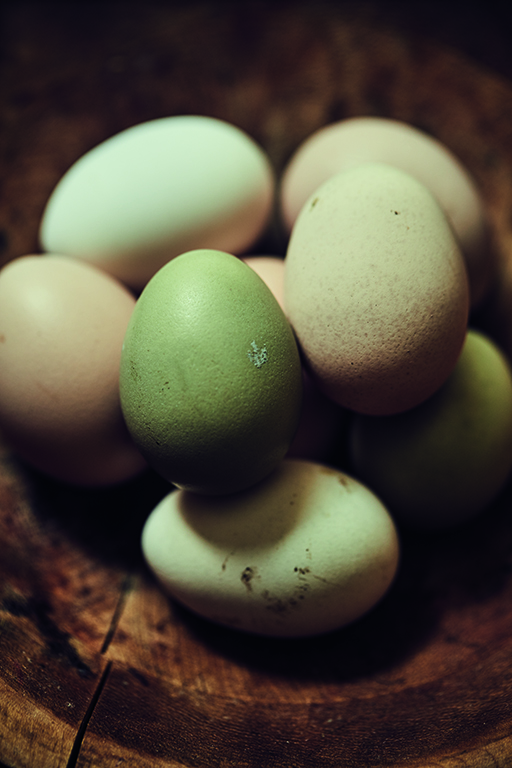 Gangi and Schanbacher sell their organic free-range eggs through a local CSA and offer salt-cured yolks at kreekytreefarm.com. 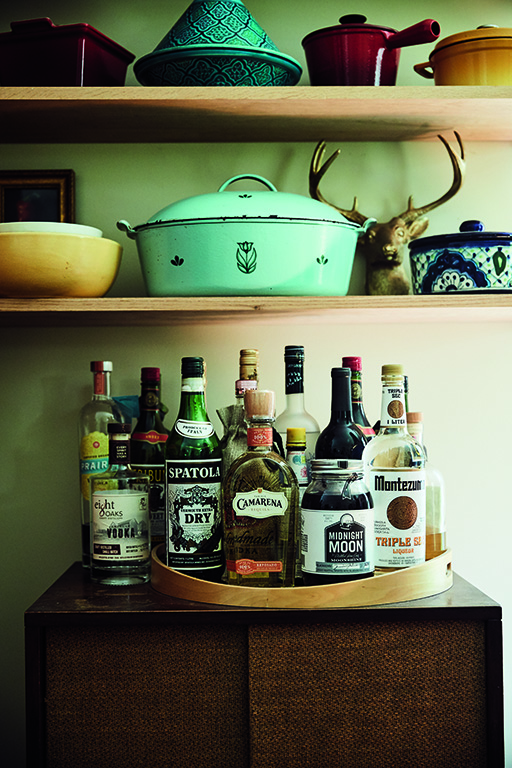 An enameled Dutch oven that belonged to Gangi’s Italian grandmother sits above a compact bar in the couple’s dining area. 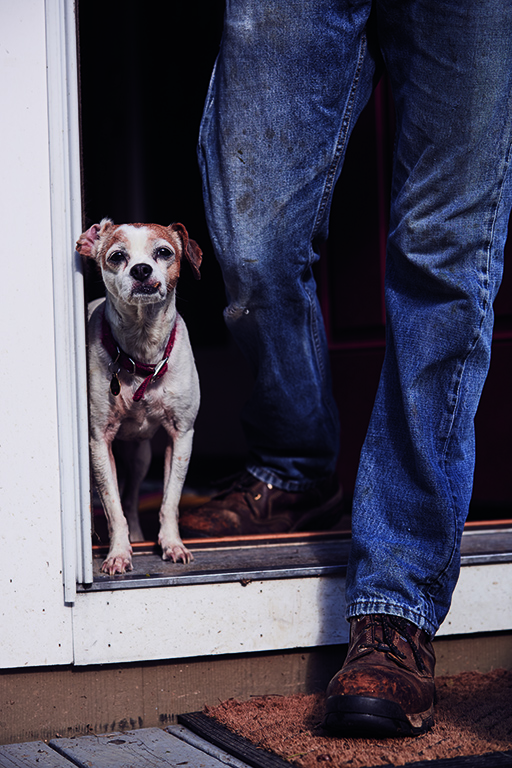 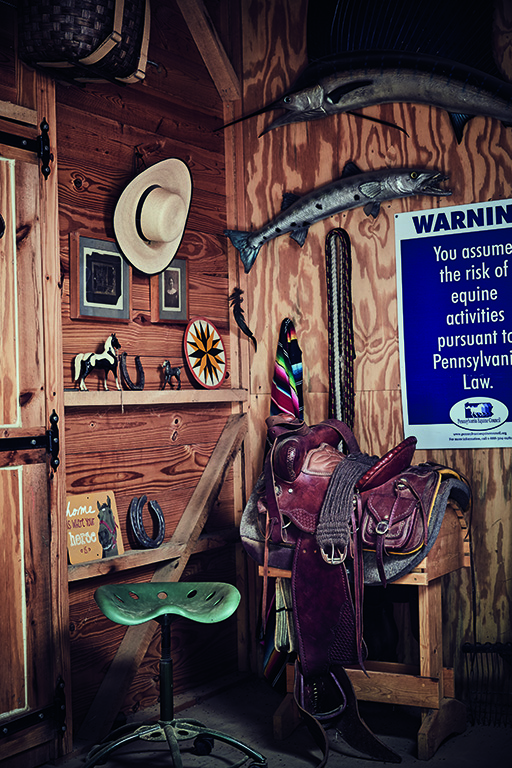 Gangi commissioned the leather saddle, which replicates those used by cattle farmers in Mexico’s Sonoran Desert. The horseshoes once dressed his beloved draft horse, Olin, who passed away in 2015. 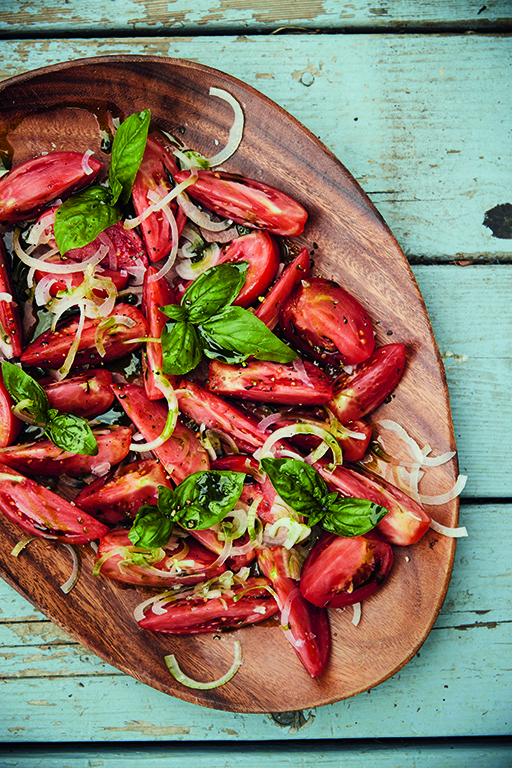 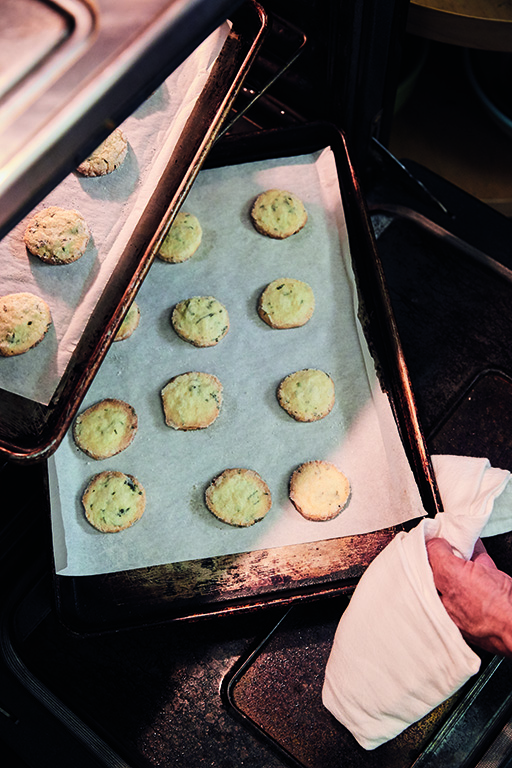 Schanbacher keeps a stash of this versatile mint-butter cookie dough in the freezer at all times. 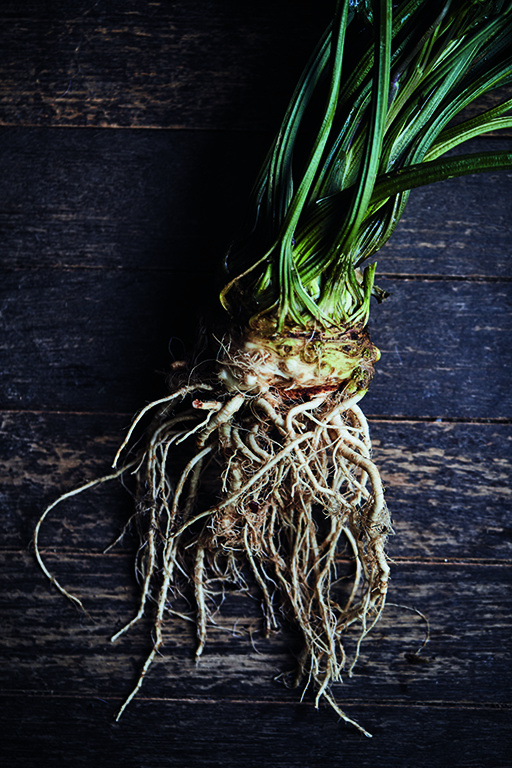 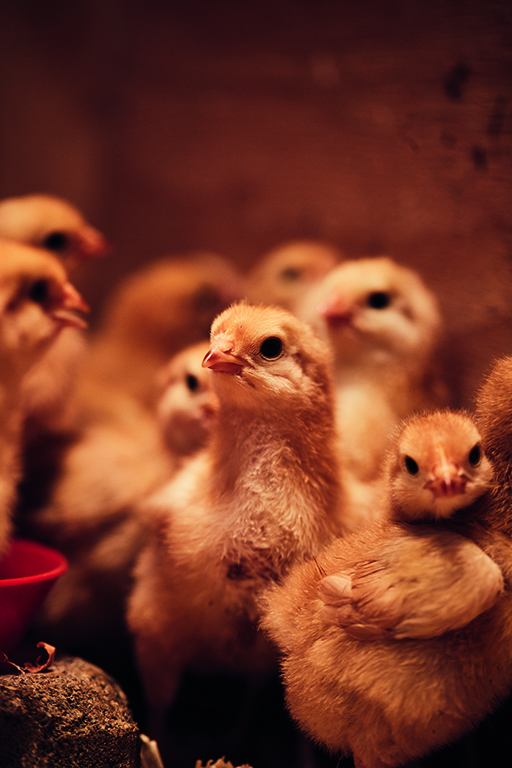 Raised as meat birds, these 5-day-old Red Rangers will be processed on the farm at about 2 months of age. 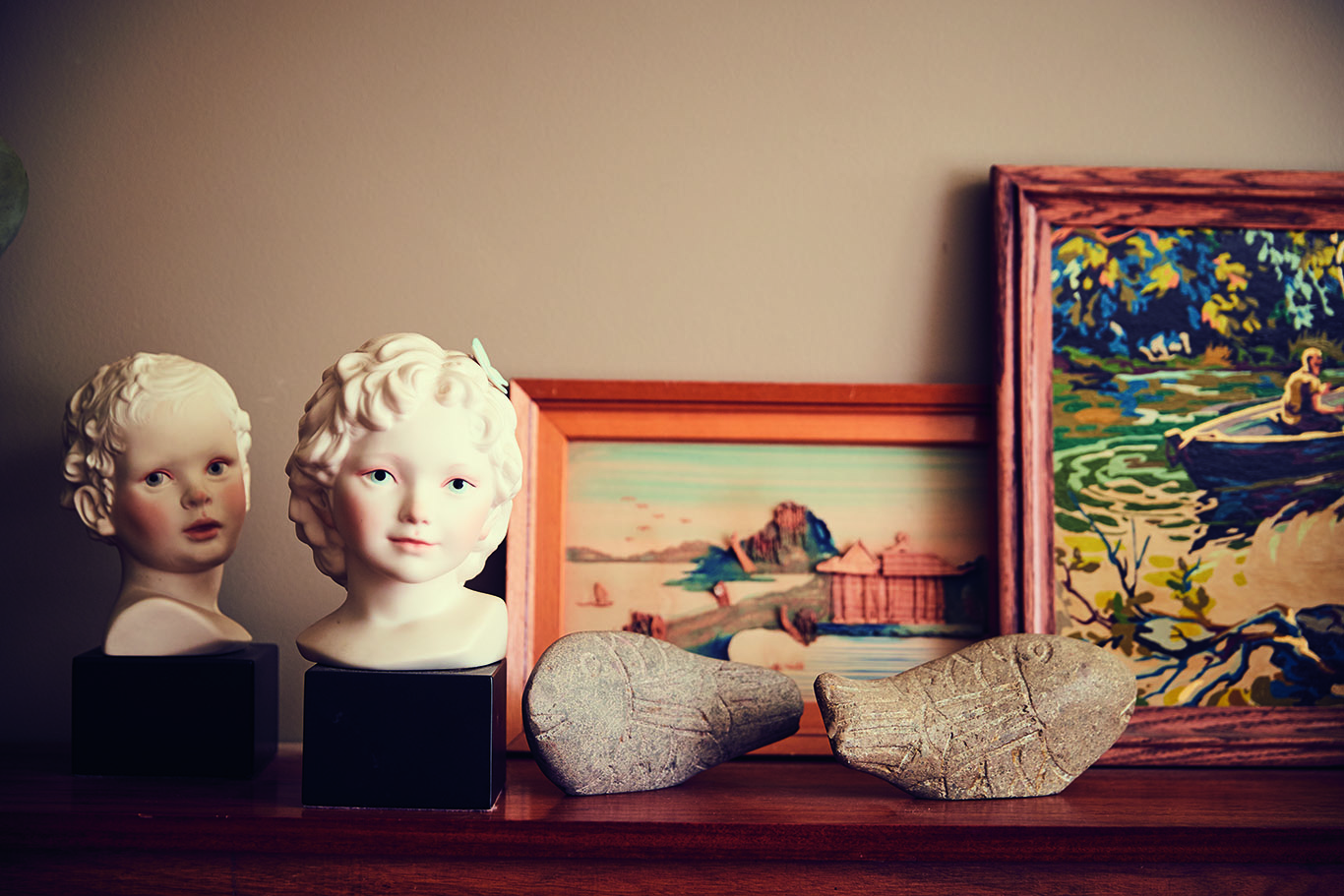 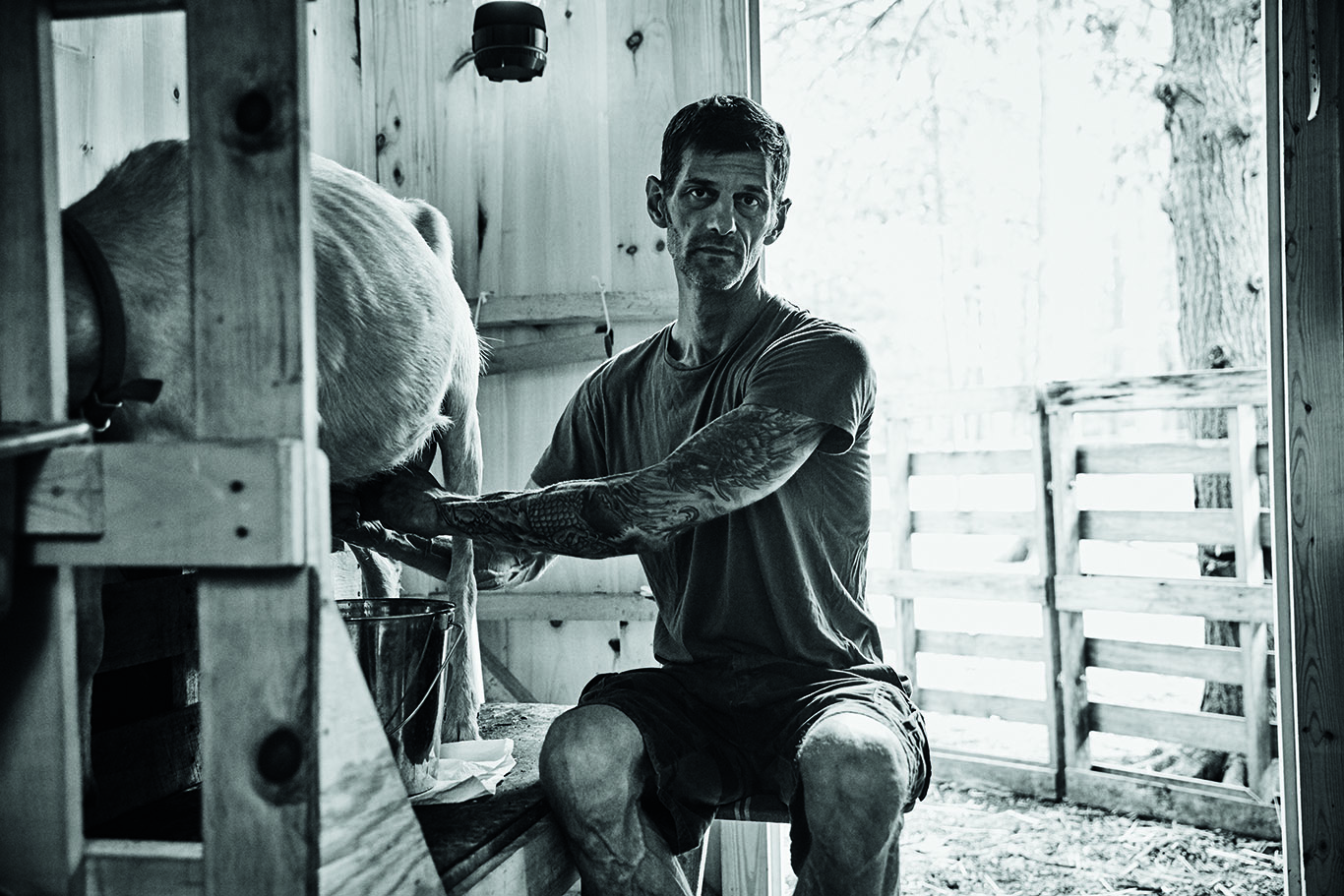 Schanbacher, who has begun experimenting with cheesemaking, milks the farm’s three goats by hand every morning and evening. 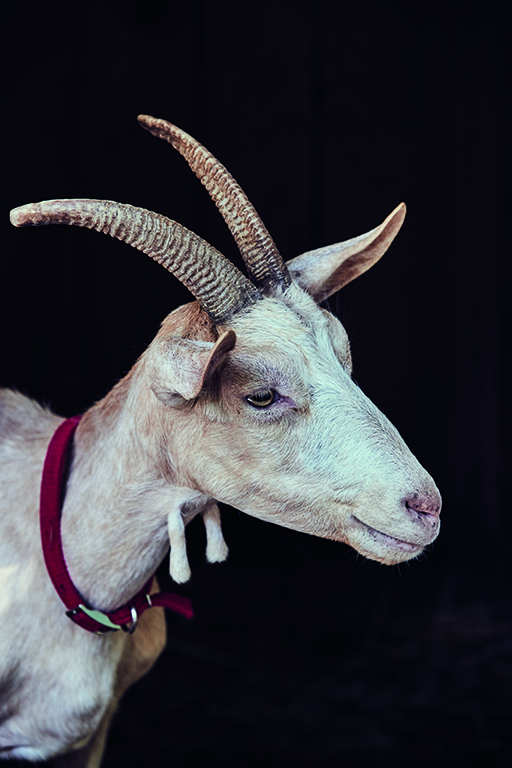 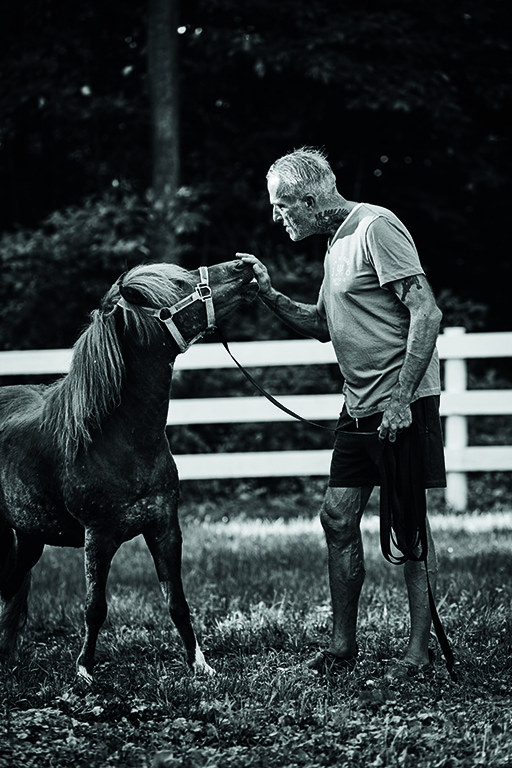 Gangi works with miniature Shetland pony Duncan, who came from the nonprofit Last Chance Farm, which finds homes for displaced and elderly equines. 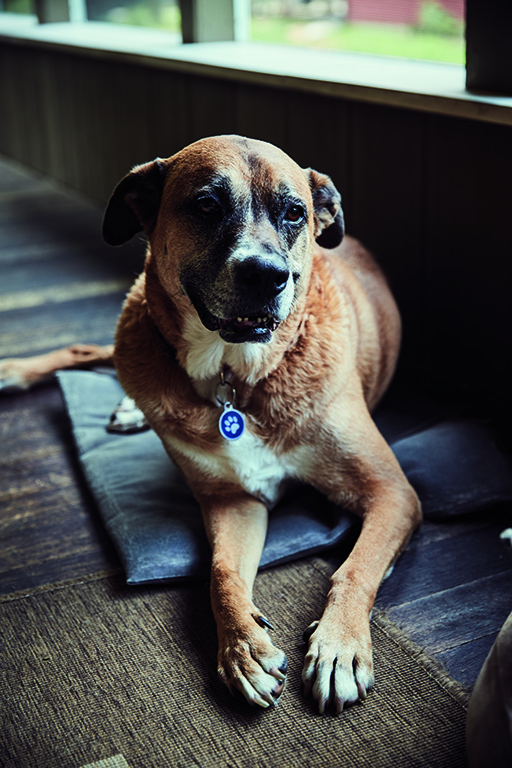 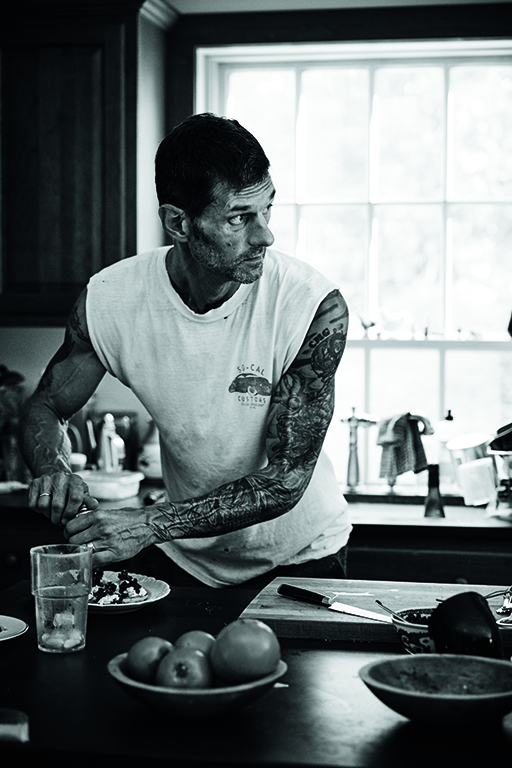 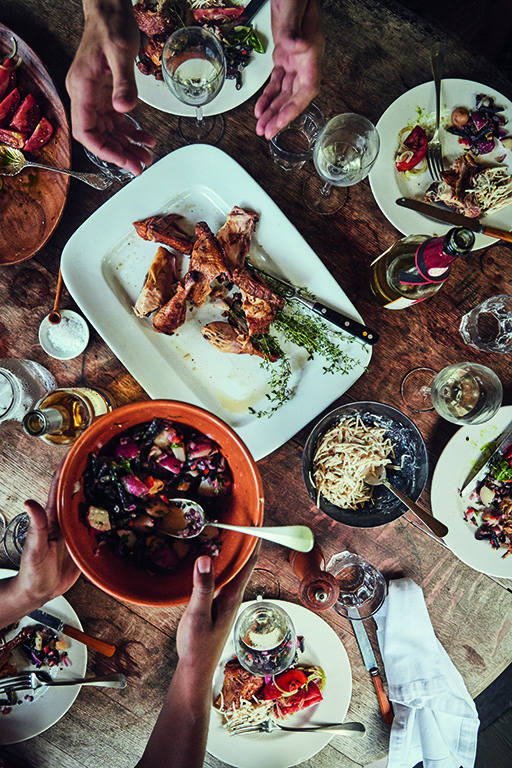 Except for the salt, pepper, and wine, everything on the table – grilled spatchcocked chicken, celeriac slaw, potato salad, and more – was produced on the farm.

Though he studied at the French Culinary Institute in Manhattan, Schanbacher also did teenage time as a line cook at Friendly’s and credits the chain for his strong work ethic. To this day, he prefers comfort food over haute cuisine. “It drives me crazy when there are 20 adjectives before everything on a menu,” he says. Indeed, a certain nothing-to-hide simplicity distinguishes the meals served at Kreeky Tree: grilled citrus-thyme chicken, peak-season tomatoes tossed with thinly sliced onions, a potato salad dressed in olive oil. But Schanbacher’s sensibility belies serious sophistication: His slaw, for instance, swaps the usual cabbage for julienned celery root. Goat’s, not cow’s, milk gives his panna cotta an extra-rich flavor.

“When it comes to nature, you learn very quickly that you can work with it, but you can’t make it do anything that it’s not supposed to do,” says Gangi.

Schanbacher’s natural ease doubles as a steadying force in the field, where things have finally begun to fall into place. “We knew there would be tremendous highs as well as extreme lows,” he says. “But every hurdle has made us stronger.” Gangi agrees yet admits that he had trouble adjusting to his new identity. “I’ve always been Chris from Garden Design, Chris from Condé Nast Traveler, Chris from Organic Life, so it was strange not to have an office to report to,” the former graphic designer explains. He’s since discovered that walking outside each morning to see what’s sprouted trumps sitting down at a desk. “We’re not looking for fame and fortune, and we don’t have a hard-and-fast plan,” Gangi says. “We just want to be in a place in five years where the farm is making a living for us, even if it’s modest.”

Gangi squeezes nearly 40 varietals into 2,000 square feet and tends to plant mostly heirlooms, which he cultivates from seeds he’s saved or purchased from organic sources, including Seed Savers Exchange and Baker Creek. For ease of access and control, he relies on raised beds. “Our soil is dense and packed with clay and stones, so we amend it with homemade compost,” notes Gangi. He groups plants with similar water needs and pairs tall and climbing crops with low-growers to eliminate spaces where weeds can take hold. Though happy with last year’s ‘Rutgers’ tomatoes, Gangi plans to add another good slicer, like ‘Brandywine,’ this spring. And the grower won’t attempt corn in such a tight space again. Gangi also cultivates ‘Bright Lights Mix’ cosmos for cutting, ‘Crackerjack Mixed’ marigolds for pest control, and cheery ‘Mammoth’ sunflowers, which live up to their name, soaring over 10 feet tall.