Check Out These Sick Hams From Around The World 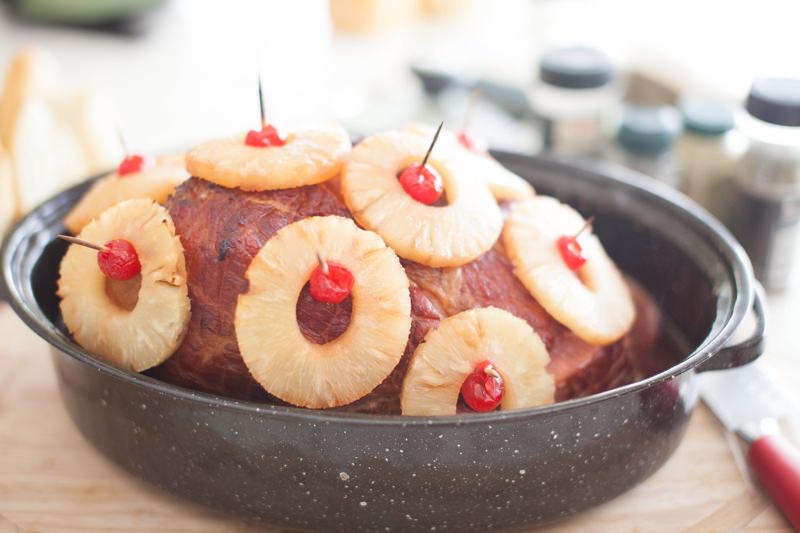 In any case, the migration of the Anglo-Saxon Germanic tribes to England sometime around the fifth century seems likely to have been the starting point of ham’s holiday tradition to England. From there, the association of ham with Christmas spread, eventually to most of England’s colonies.

But for many Americans, the only kind of ham we know is a glazed and baked variety, often very sweet, which is only but one of dozens of hams around the world. Here, we lay out some of the world’s most famous hams and how they are made.

But before we get started: what exactly is a ham? At its most basic, we will define a ham as a preserved leg of pork. The method of preservation can vary – the most common are smoking, salting, and brining – and the flavorings can range from nothing but salt and pepper (and often nitrates and nitrites, serving as preservatives) to elaborate spice blends and glazes. Now, let’s journey around the world….the fine world of ham, that is! 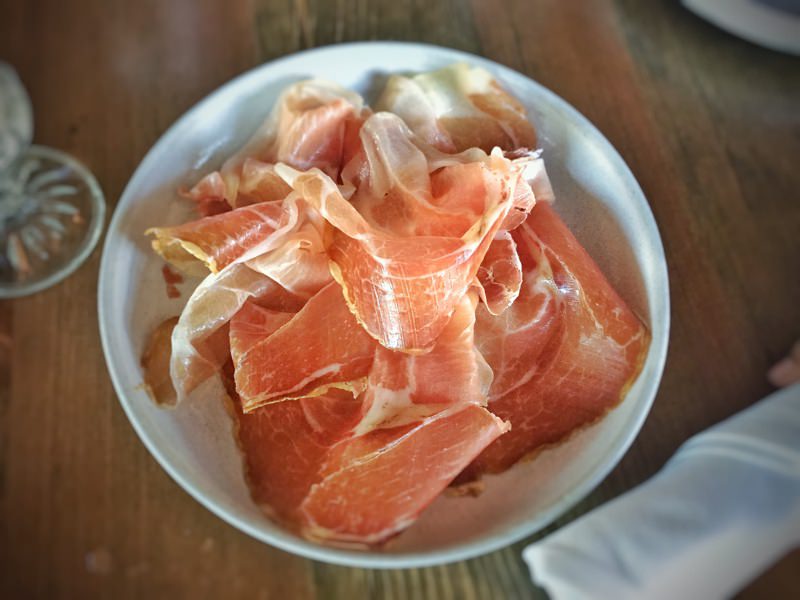 Country ham: A variety of ham native to the Southeast United States, ranging from Virginia through Georgia and as far west as Missouri. Country ham is traditionally dry-cured in salt (and sometimes other preservatives), then aged for at least a few months, and may or may not be smoked afterwards (though most are). Country ham is rarely flavored with anything besides salt, sugar, and black pepper, and is typically sold whole, with the bone still inside. It is a particularly salty variety.

Virginia ham, or Smithfield ham, is a country ham from Virginia, and the name is unrelated to the Smithfield Foods company.

City ham: This is the type of ham you see at the deli counter in supermarkets. It differs from country ham in that it’s wet-cured, which usually means that it’s injected with a brine to accelerate the curing process over the dry-cure of a country ham. (City hams can also be made by immersing a ham in a salt brine solution.) City hams can contain the bone or be boneless, and are often packaged with water added, which, says Serious Eats’s Kenji Lopez-Alt, is done to make the final product heavier and thus more expensive, since you’re paying per-pound. City ham is more moist and tender than a country ham, but also much milder in flavor, and as the cheapest hams are of this variety, it can be tricky to find a well-made city ham.

The way a city ham is flavored can vary by region. In the Northeast, for example, maple syrup is a common flavoring.

Corned ham: Corned ham is not a ham, really: it is cured for only one day before being roasted, which makes it more of a simple roast pork leg dish than a ham.

York ham: This ham is made from an adult Large White pig, the extremely literally named breed of Yorkshire, England. As befits a pig with such a bland name, it is also the most common breed raised in the UK as well as the US. When you think “pig,” this is probably the kind you’re thinking of. York ham is dry-cured with little more than salt and nitrates. It is sometimes but not always smoked, and is usually left to ferment for less time than, say, a country ham, which gives it a paler pink color, milder flavor, and a bit more moisture. 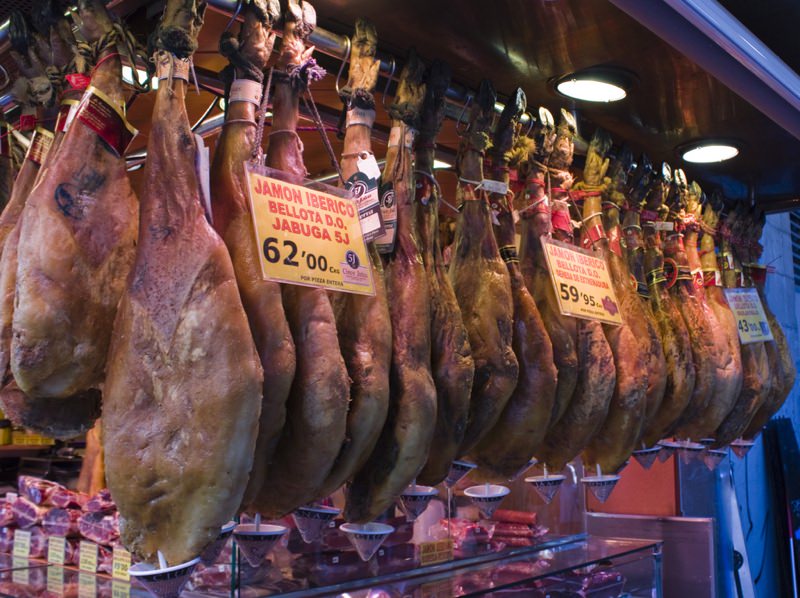 JamÁ³n ibérico: Perhaps the world’s most famous ham, this Spanish variety may only be made from pigs that are genetically more than 50% black Iberian pigs. A major element of this ham’s legend is that these pigs are encouraged to roam freely, which gives them more muscle than factory-raised pigs, and to gorge on some of their favorite foods: acorns. Hams made from pigs that are only permitted to eat acorns as they near slaughter is called jamÁ³n ibérico de bellota, and are incredibly expensive.

The curing process is thus: after slaughter, the hams are salted for about a week then rinsed and kept in a cold room for about a month. The ham is then hung in a warmer drying area – ideally outside, actually – for a year to fully dry out, then moved to a cellar for at least a year. This ham is so prized that it is rarely cooked or really prepared in any way at all: typically it is simply eaten as is, in thin slices. 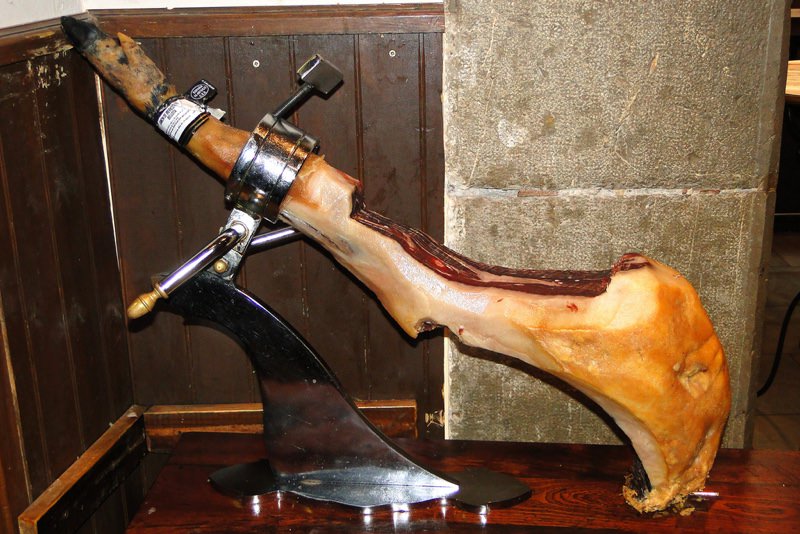 JamÁ³n serrano: Another Spanish ham, but this one can be made from most any breed of pig, which makes it much cheaper to produce. It too is dry-cured, but the aging process is much quicker, often just over a year, compared with the minimum three years for jamÁ³n ibérico. 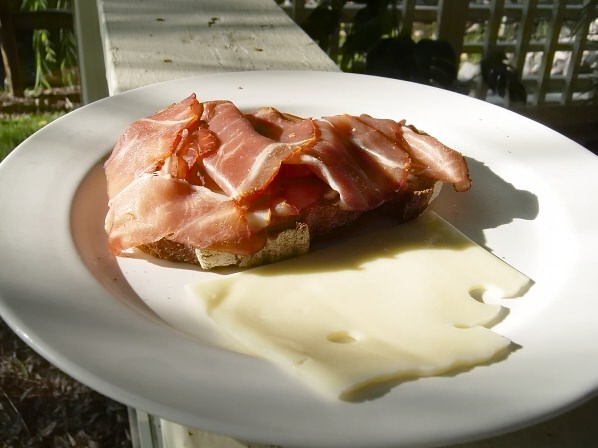 Westphalian ham: Similar to jamÁ³n ibérico, Westphalian ham is a German variety made from pigs which forage for acorns in the forests of Westphalia, Germany. This ham is dry-cured, but is then smoked slowly. The tinder used to create the smoke is traditionally juniper branches, which gives the Westphalian ham a unique flavor. It is also among the more expensive varieties in the world.

AmmerlÁ¤nder ham: Another German ham, this one is dry-brined with a few different spices: salt, yes, but also sugar, juniper, black pepper, and sometimes allspice, before hanging to cure. It’s then usually smoked at a low temperature for flavor.

Black Forest ham: Similar to AmmerlÁ¤nder ham, Black Forest ham may have a few different spices in the mix, most notably garlic. It’s also smoked for much longer, up to two weeks, which gives it a sinister black crust. 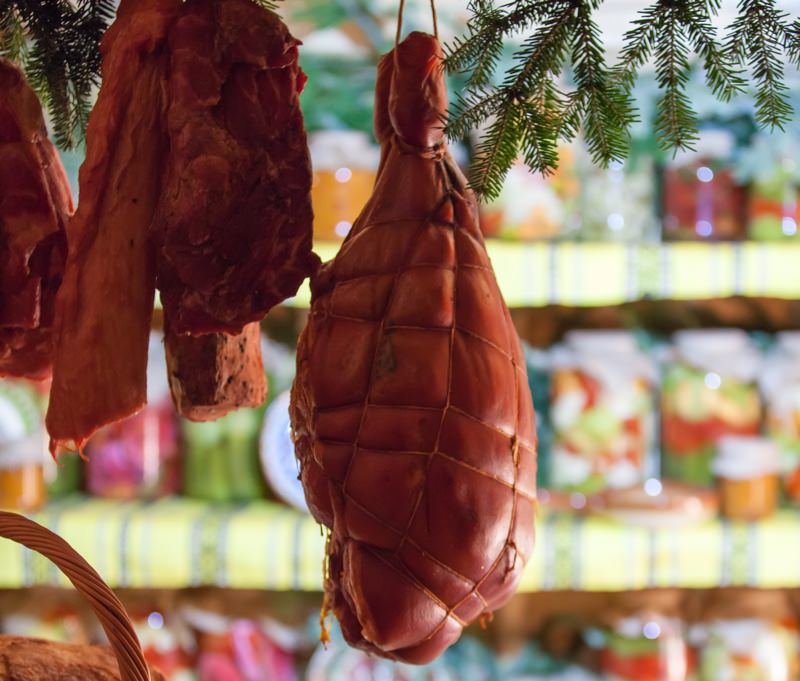 Bayonne ham: A French variety, this ham has extremely strict rules about its production, ranging from the breed of pig that can be used to the specific temperature and location where the hams can be hung. It is a fairly young ham, taking just under a year in total, and is a dry-cured variety. Near the end of the curing process, many produces of Bayonne ham will rub a bit of piment d’espelette into the ham for flavor. 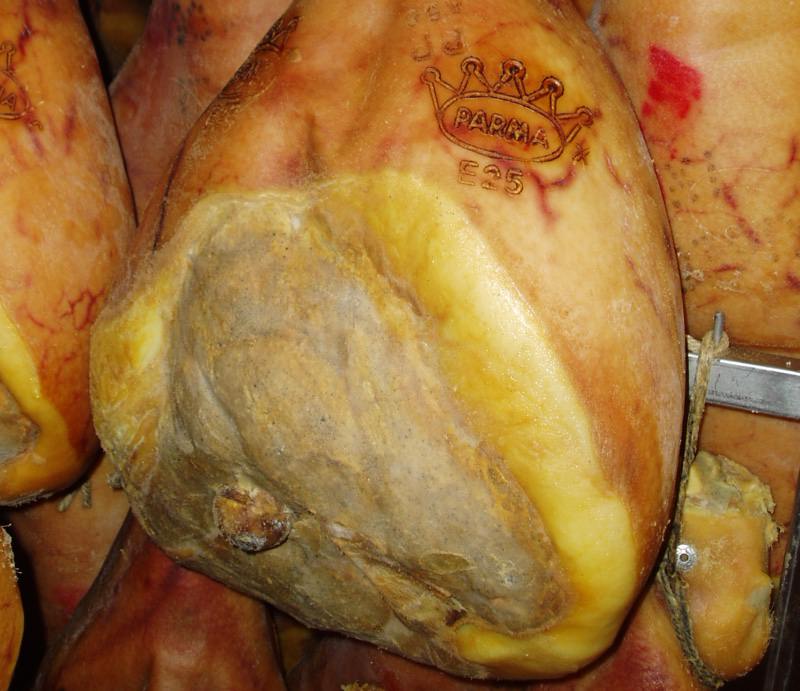 Prosciutto di Parma: A dry-cured variety from Italy, this ham is perhaps the best known prosciutto. (“Prosciutto” itself is a general term referring to the basic process, but not the location or specific variations, of the ham.) Prosciutto di Parma is salted, then washed, then aged for about 18 months. Near the beginning of the aging process, a mixture of pork fat, salt, pepper, and flour is spread on the cut side of the ham to protect it; this mixture is removed before sale. Prosciutto is often also pressed with weights during the initial salting period, to assist in the draining of blood or water from the ham.

Tyrolean speck: From the northernmost reaches of Italy, an area that has previously been part of Germany and which still has distinct German roots, comes Tyrolean speck. This ham is dry-cured and then lightly smoked, but what makes it unusual is its cure (juniper, garlic, bay leaves, various other spices) and the fact that it is deboned at the start of the entire process. This can make speck look like bacon, but it is not: this is a deboned ham. 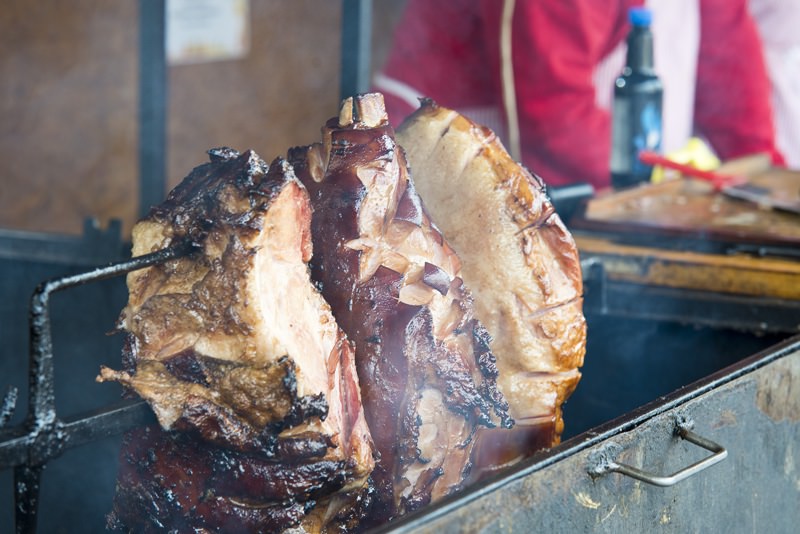 Prague ham: A singularly unusual ham from the Czech Republic, Prague ham is wet-cured in a brine solution, sometimes with spices, then smoked over beechwood. Like speck, it is usually boneless, and typically eaten with potatoes and beer.

Elenski but: Little known outside its native Bulgaria, this ham is dry-cured and then left to air dry for about a year, like many other hams. What makes this one different, aside from the variation in airborne bacteria which creates the flavor differences in most hams, is that it is cured in salt in a particular kind of barrel, called a pastov, for 40 days. It is not intentionally smoked, but the pastov is usually kept in the room with a wood-fired cookstove, which could theoretically impart a bit of smokiness. 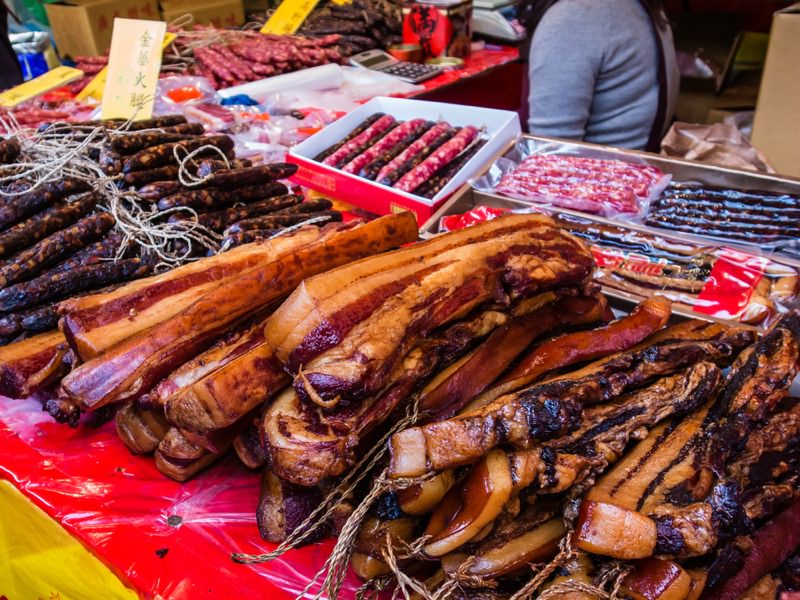 Jinhua ham: The most prized ham in all of China, Jinhua ham is a dry-cured variety made from the Tongcheng pig, a white breed with black coloration on its hind legs and head which gives it its Chinese name (translated clumsily as “two ends black”). This ham is repeatedly salted, then washed and soaked, then, unusually, trimmed into a particular elongated teardrop-like shape. It’s then sun-dried for a week before curing for about eight months in a cool cellar. It is eaten as-is, like most other prized hams, but also is made into luxurious broths and stocks for soup.

Popular
7 Smokable Plants You Can Grow That Aren’t MarijuanaBrian Barth
6 Differences Between Llamas and AlpacasAndrew Amelinckx
A Botanist-Bartender’s Ode to the DandelionDanny Childs
How to Grow Your Own Tomatoes, Part 2: TransplantingBrian Barth
Why Are Barns Painted Red?Thomas Durant Visser
Explore Modern Farmer