This Farm Uses Only Sun and Seawater to Grow Food

In Australia, a new indoor farm is growing lots and lots of tomatoes with nothing more than solar power, seawater, and coconut husks (oh, and a massive amount of infrastructure costs, as well). 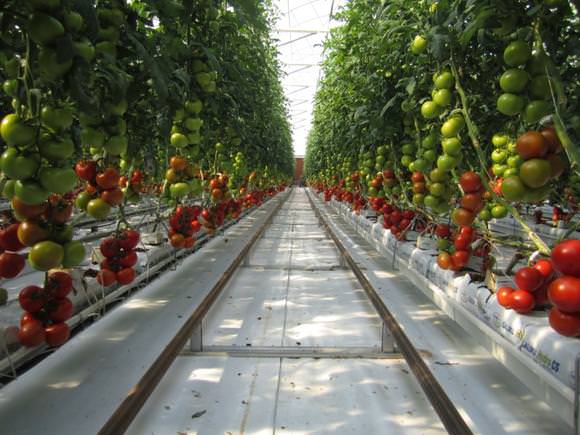 Sundrop Farms, located near Port Augusta in South Australia, is the first commercial agricultural system of its kind: It doesn’t use groundwater, soil, pesticides, or fossil fuels to grow crops. The project has been a six-year odyssey that began with a pilot greenhouse in 2010, followed by the construction of a nearly 50-acre facility in 2014 that, as of earlier this month, is now fully up and running with a projected capacity of 18,000 tons of tomatoes – the crop the company is focused on at this facility – a year, according to Sundrop.

Here’s how the company explains it: Seawater is pumped from Spencer Gulf, located about a mile and a half away from the facility, where it’s desalinated through a solar powered thermal unit. “Sustainably sourced” fertilizers and micronutrients are added to the water (they won’t give details regarding their nutrient mix), which is then used to hydrate the tomato plants, which are grown in coconut husks instead of soil (a renewable resource), which also aids in root growth due to their natural hormones. According to Philipp Saumweber, Sundrop Farms CEO, the they don’t have to use pesticides the they pump seawater through the facility’s air filters, which kills insect pests due to the high salt content in the water-saturated air.

The farm’s solar power is generated by 23,000 mirrors that reflect sunlight to a more than 375-foot high receiver tower. On a sunny day, it can produce up to 39 megawatts of electricity, which is more than enough to power the desalination system and the rest of the facility’s power needs. Excess thermal heat and water are kept in storage facilities on the farm to use when needed, according to Saumweber. That said, the facility remains on the electrical grid as a back up for 10 to 15 percent of its power needs when weather makes it difficult to rely solely on solar power. 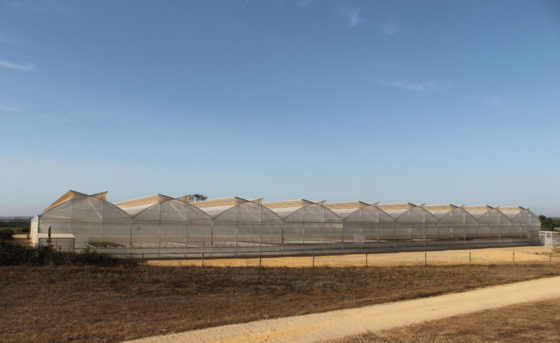 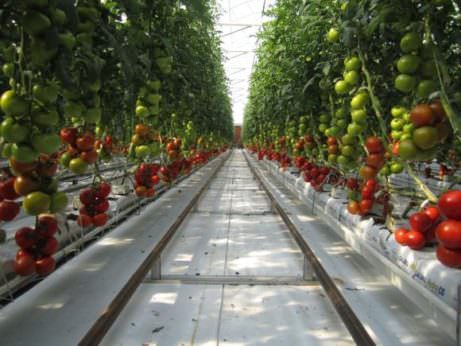 The company spent about $200 million on the project, with $100 million coming from the global investment firm KKR, a larger outlay than a typical hydroponic greenhouse system, which can run about $1 million an acre. But, according to Saumweber, who spoke to New Scientist, the seawater system will pay off in the long run since conventional greenhouses are more expensive to run on an annual basis since the rely on the power grid, which is powered by fossil fuels.

The price tag isn’t stopping the company from building another farm in Australia, one in Portugal, which was recently completed, and one in Tennessee, which broke ground this year. While not all of them may use seawater or a solar tower, they will all have some “sustainable resource angle,” according to an Australian Broadcasting Corporation interview with Reinier Wolterbeek, the chief technology officer for Sundrop Farms. When Modern Farmer asked Saumweber whether he could be more specific, he answered that he couldn’t “at this stage,” and added “that we will always use sustainable inputs to dramatically reduce our reliance on finite natural resources.”

The company partnered with a large Australian grocery retailer, Coles, with whom they have a ten-year contract. Tomatoes from their pilot program, which started before the larger facility came online, are already on grocery store shelves.

Not everyone feels the system makes economic or environmental sense, at least in regard to the project in Australia. Paul Kristiansen, a professor at the University of New England, Australia, told New Scientist, that since there wasn’t a problem growing tomatoes in other parts of Australia, the need to grow tomatoes in a desert was a “bit like crushing a garlic clove with a sledgehammer.”

Environmentalists have taken issue with desalination due to the amount of energy it takes to produce potable water, and the problem of the disposal of the highly concentrated salt brine that’s dumped back into the ocean, which can be too salty for marine life to inhabit.

Sundrop Farms’ technology answers the energy question with its use of solar power. As to concerns about impacts on marine life, Saumweber says their system doesn’t result in water with high levels of salinity. According to Saumweber, cooled seawater from the greenhouse cooling system is mixed with warm elevated salinity seawater in a large lined storage tank for discharge back to the ocean.

“The large size and surface area of the storage and the mixing of warm and cool streams results in a seawater that is only slightly more concentrated and at a similar temperature to the ocean,” he tells Modern Farmer in an email. “The minor increases in salinity at the discharge location as approved by the Environmental Protection Authority.”

In the face of the high loss of groundwater worldwide and other problems associated with climate change, Sundrop Farms’ technology may prove to be helpful in combating these issues as we try to figure out how to provide enough food to feed the world’s growing population, estimated to be 9.6 billion people by the year 2050.

Hi! How can we get you to start a project here in New Mexico?
Different set of problems and solutions, but we have a good regenerative agriculture group already -and some useful theorists, like me – I have framing to show cost/benefit and risk/benefit analysis for large-scale ecologies and projects.
Pls get in touch, if just for that, it could help make your case esp for sceptics. Great work!!