How Kudzu, "The Vine that Ate the South," Put Southern Agriculture on the Skids - Modern Farmer
Plants

How Kudzu, “The Vine that Ate the South,” Put Southern Agriculture on the Skids

A brief history on why southern soils are so bad - which has everything to do with why half the region is now covered in kudzu, one of the world's most infamous invasive species. 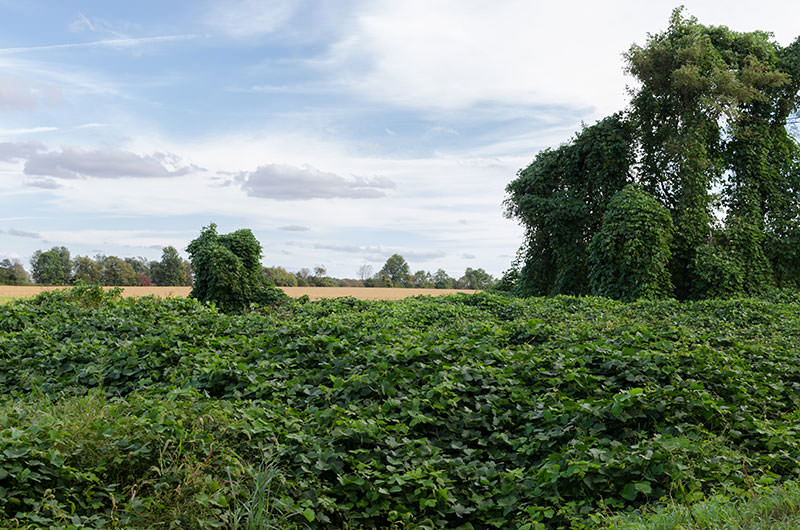 Indeed, Georgia has an illustrious agricultural history, but the dreamy Gone with the Wind version excludes some of the most notable aspects of its heritage, which are not as quaint. Slavery, for starters. Along with poor white “dirt farmers” – a derogatory term for the rural underclass, who scraped by to earn a meager living off small plots of land, often leased on unfavorable terms from plantation owners.

Thanks to unsustainable farming methods, the land itself became too poor to support abundant crops. Fields of dry earth with withered looking plants – the stereotypical imagery – was an increasingly common sight throughout the southern states in the second half of the 19th century and through the Great Depression

Then there is kudzu, often referred to as The Vine That Ate the South, which – as anyone who has spent much time traveling through the entire southern region will tell you – seems to be the only thing that will grow. This ravenous vine still covers an estimated 227,000 acres. It easily strangles mature trees, and is often photographed covering abandoned, half-collapsed houses, rusted old cars, washing machines, and other left-behind junk.

As it turns out, all of these things – slavery, poor soil, and kudzu – are deeply related. It all started with cotton, the crop on which the so-called Old South was built. 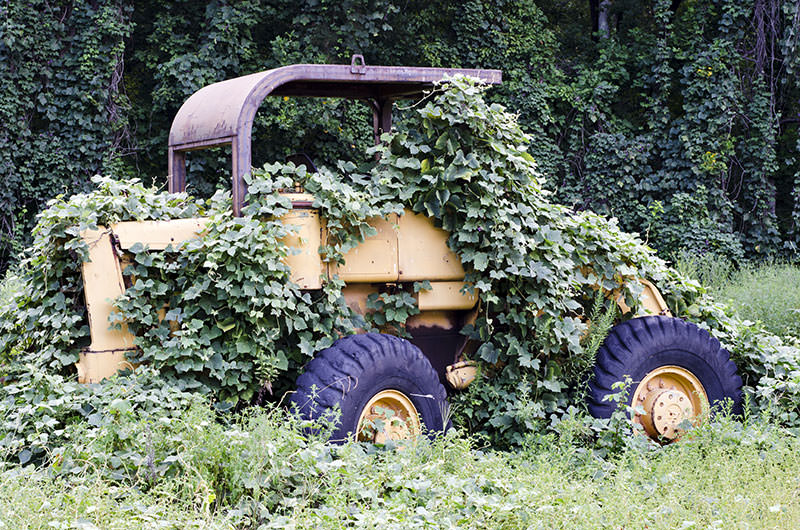 I had a farm for several years near Athens, Georgia, where I raised goats, chickens, and pigs. I didn’t dream of raising crops – beneath the pine trees and crabgrass covering my seven acres was a layer of topsoil all of a quarter-inch deep. Beneath that thin carpet of soil was Georgia’s infamous red clay: When dry, it’s like trying to plant into a brick; when wet, it’s as slimy and anaerobic as a swamp. Good for pottery, perhaps, but not so hot for farming. I figured I’d use my livestock manure to slowly improve it.

But the Piedmont region of the South where Athens is located – a vast, gently rolling tableland stretching across the middle portions of Mississippi, Alabama, Georgia, and up through the Carolinas and into Virginia – was once known as the Black Belt for its deep, dark topsoil. The term was later associated with the slaves who were the primary source of farm labor across the region, as well. The Black Belt was very much Gone with the Wind territory: big old houses with columns, Southern belles, and all that. Cotton was the cash crop of the day, and it was extremely productive in the rich soil, making the “Planter” class extremely wealthy.

At the peak of cotton production in the mid-1800s, 96 percent of the county where I had my farm was, literally, covered in cotton. Which has everything to do with why the soil was so poor when I arrived a century and a half later.

Such is the destiny of monocultures. Thanks to the rich soil and free labor, cotton farming was so profitable that landowners insisted on planting it year after year after year, and made little effort to replenish the soil or rotate other crops. In the mid-1800s the South produced 75 percent of the world’s cotton; but by the turn of the century the whole system was showing signs of collapse.

The death knell of King Cotton, as it was called, arrived in 1892, when the boll weevil – a tiny insect with a long snout like an anteater, and which lays its eggs inside cotton flowers, ruining the harvest – crossed the Rio Grande and entered Texas from its native range in Mexico. It spread slowly at first, but by the mid-1920s had infested nearly every cotton farm in the South; increasingly undernourished from the depleted soils, the plants were decimated. The industry was wiped out nearly overnight – just in time for the Great Depression.

In the 1930s, an erosion-induced disaster unfolded quietly in the Deep South, just as the Okies were fleeing the Dust Bowl of the Midwest. Poor land management practices throughout the era of King Cotton had already caused severe topsoil loss, but after the boll weevil hit, many farms were left unplanted and much of the remaining topsoil was washed into streams and rivers.

Many efforts were made to stem the erosion during this time. The Soil Conservation Service – now the Natural Resources Conservation Service (NRCS) of the USDA – assisted landowners in building tens of thousands of ponds in farm drainages across the Southeast to catch the sediment contained in stormwater runoff. Huge tracts of gently sloped land were sculpted into flat terraces, some of which still remained in the woods at the back of my farm. Farmers were encouraged to use cover crops to hold the soil in winter and build fertility. (Today, such practices are widely upheld as tenets of sustainable agriculture.)

At the peak of cotton production in the mid-1800s, 96 percent of the county where I had my farm was, literally, covered in cotton. Which has everything to with why the soil was so poor when I arrived a century and a half later.

But another idea pushed by the Soil Conservation Service didn’t work out so well. Most people assume that kudzu, The Vine that Ate the South, was somehow “accidentally” introduced from Asia. In fact, it was touted as a miracle cure by the government for healing the south’s ailing soil.

A little botanical investigation reveals why. Kudzu is a legume, and like most legumes, it deposits nitrogen in the soil as it grows, which other plants can then use. It grows profusely even in bone-dry infertile conditions, producing tons of organic matter per acre with its voluminous biomass. Plus, livestock of all kinds will eat the foliage, which is as rich in protein as alfalfa, offering a way to make the landscape instantly productive again.

In the 1930s and 1940s, the Soil Conservation Service grew 70 million kudzu seedlings and began distributing them to farmers, free of charge. To encourage participation in their ill-advised experiment, government agents travelled the back roads preaching the virtues of the plant and offering $8 per acre to grow it. A newspaper columnist named Channing Cope became the wonder-crop’s chief evangelist. “The healing touch of the miracle vine,” he wrote in the Atlanta Constitution, would make the South’s farms “live again.” Cope spearheaded the Kudzu Club of America, which boasted a membership of 20,000 at its peak in the mid-1940s.

Problems arose quickly, not the least of which was kudzu’s tendency to spread far beyond where it was planted. Livestock did fatten up nicely on it, but unlike alfalfa and other hay crops, there is no way to cut and bale kuzdu for winter – those 50-foot vines clog baling equipment in a heartbeat. The thick fibrous roots, which can grow to size of a person, wreak similar havoc on a plow.

Too good to be true, the kudzu campaign soon fizzled. After World War II, the so-called Green Revolution provided chemical fertilizers and more powerful plows and tractors, and the farming economy of the South slowly ramped back up, no longer dependent on healthy topsoil to grow a high-yielding crop. Georgia hardly grows any cotton or peaches anymore, but the state is the number one producer of factory-farmed chickens in the US, who are fattened up on grain grown largely in the Midwest. “Chicken Capital of the Country” doesn’t have quite the same ring to it as the Peach State.

The story of kudzu is coming full circle, however, as southerners are learning to make use of it, rather than just curse it. An extensive cottage industry has sprung up around all the products that can be made from the plant, from medicine (the Chinese traditionally used the roots for a variety of ailments) to craft (i.e. basketry) to food (kudzu honey and kudzu flower jelly are popular items at roadside stands in rural areas). Some folks have tried grinding the vines into a pulp to make cardboard and other paper products on an industrial scale. In cities, goats are often used to control kudzu on vacant lots as part of urban agriculture initiatives.

And an interesting thing happened back in 2009: the Japanese kudzu bug, which sucks the plant’s juices, showed up in an Atlanta garden. Like the boll weevil, it is slowly spreading throughout the South, and once ominous kudzu patches – the ones you see strangling whole forests on the side of the road – are starting to lose their grip on the landscape. Nature has a way of bringing things into balance.

I have land in the southern
California desert, and am considering growing kudzu commercially. Who can talk
Me out of this idea? Or into!