5 Things I Learned the Hard Way About Raising Goats

Sex-crazed and trouble-prone, there's never a dull moment with goats around. 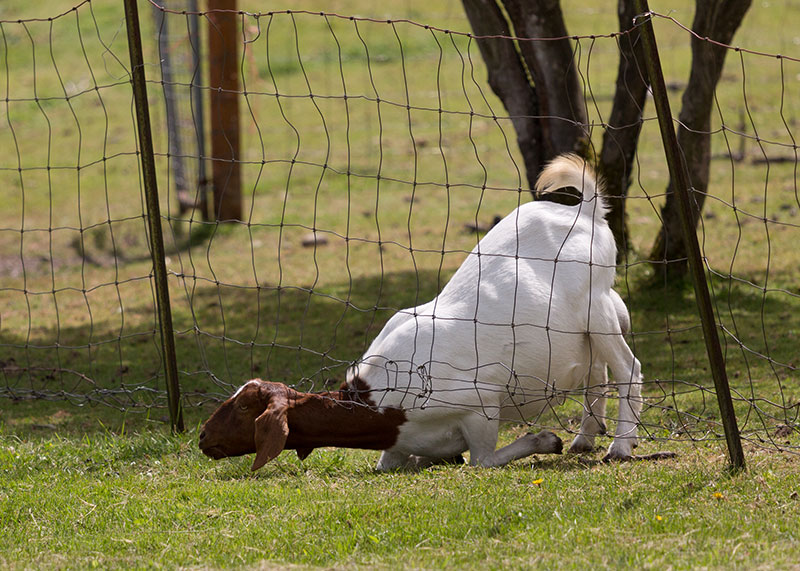 I once followed the bleating of one of my young billy goats only to find the poor guy with his head stuck between a fence post and the edge of the barn. He was trying to get at the grass on the other side. Another time, several of my goats wandered out of an unlatched gate and got nabbed by bandits!

Besides always double checking that the pasture gate is latched, here are a few other things about raising goats I learned the hard way.

Goats are King of the Mountain

Domesticated goats are not so different from their mountain-dwelling ancestors – they have an inborn need to get on top of the highest thing around. Not far from my farm in Georgia there was a tourist attraction called “Goats on the Roof.” I never went because, besides being cheesier than cheese, I was busy trying to keep my own goats off the roof. I had a small shed in the pasture that I allowed them to climb – which the younger goats would clamber onto every time a human came by, as if to show off – but keeping them off other roofs was a real challenge. My mom was not impressed when they clambered on the roof of her car. Fixing the scratches in the enamel cost me a lot of goat cheese.

Goat Sex is Not Sexy

I started my herd with three alpine dairy goats. My plan was to make cheese. It’s only the females, of course, that produce milk, but they don’t produce milk without first giving birth to baby goats. Which is where the male goats come in. I knew that billy goats had a reputation for orneriness, which in my experience is well-deserved (they have a tendency to constantly head butt anything that moves), but I had no idea what vile creatures they are. Like most folks who raise dairy goats, I didn’t keep sexually mature billy goats on hand; I just rented one when I needed it.

Nanny goats start going into heat as the weather cools off in fall – you can tell when they are ovulating because they bleat constantly for no apparent reason, and a viscous liquid begins to drip from their private parts. As these signs began to reveal themselves that first autumn of my short-lived goat-keeping career, I went up the road to another farm where I had arranged to rent a billy for a week to get the job done. That monstrous animal went straight to work as soon as I brought him home. The mating dance involves the male goat peeing all over itself before mounting the females, who, though they more or less cooperate, seem to be in great distress about the whole thing.

Between sexual acts, billy goats often remain aroused. This is highly apparent because their virile member – which doesn’t look particularly virile given that it is about the length and diameter of a pencil – is constantly poking out. The little pencil regularly emits its contents all over the ground if a female doesn’t immediately consent. Fun.

Did I mention that billy goats have an extraordinarily powerful musk? Apparently nanny goats find it heavenly; most humans find it repulsive. One reason people with dairy goats don’t keep billy goats around is because that smell has a way of getting in to the milk and any cheese that’s made from it. Apparently, just the presence of a billy goat nearby makes nanny goats emit hormones with a similar fragrance. It’s what makes goat milk “goaty.” A low level of goatiness is desirable in goat cheese, but if you let the boys and girls hang out together, the goatiness factor goes from a one to a ten.

The first time I had the displeasure of handling a billy goat, I learned the hard way that their aroma is not just awful, it sticks to everything – your clothes, hair, skin – even after you shower. I thought I’d scrubbed it all off that first day after bringing the billy goat home, but that night my girlfriend informed me otherwise.

The Unpleasant Truth of Castration

Only a single male is needed for stud services, even if you have an enormous herd. So, since goats are born in equal numbers of males and females, something has to be done with all those extra males – especially since the sex-crazed antics of billy goats disrupt the lives of milking goats. One option is to eat them. Another is to rent them out to people for brush-clearing services. I’ve tried both – goat meat is delicious, and getting goats to eat your weeds is a profitable trend.

If you don’t castrate males within the first few months of their life, the meat tastes like dirty socks.

In either case, they need to be relieved of the two tiny parts that make male goats stinky and ornery: their testicles. If you don’t do this within the first few months of their life, the meat tastes like dirty socks. And trying to coerce an intact billy goat to diligently eat weeds all day without busting out of the fence is a laughable thought at best. Fortunately, castrating goats is easy and – although it doesn’t look like it – pretty painless. You secure a special rubber band around the skin above each testicle (very tightly), and over the course of a month or two the testicles literally shrivel up and fall off. Surprisingly, the goats don’t seem to mind, and wethers, as castrated goats are known, are much easier to keep around than uncastrated bucks.

A Domesticated Goat is Not Necessarily a Tame Goat

My initial success renting out my male goats to eat weeds led me to dream bigger. When a wealthy land owner contacted me for brush control services I decided to invest in a bunch of meat goats. The idea was to buy them as young as possible, raise them up fast on the kudzu, blackberry canes, privet, poison ivy, English ivy, and the other rambunctious plants that quickly colonize any unmaintained plot of land in Georgia, and then sell their meat to fancy restaurants in Atlanta.

I was used to my docile dairy goats, which I’d raised by hand, and who seemed to consider me as part of their extended family. When I bought my first batch of meat goats from a livestock dealer, however, I learned that goats that have not been raised from birth by a loving human don’t want anything to do with human. I took my new goats straight from the livestock dealer to my new client, where two of them immediately bounded over the fence like a gazelle running from a lion. They were impossible to catch in the open landscape – the two rascals would scamper off as soon as I got within 100 feet.

For a while they lived feral-style in the woods behind a neighbor’s house, a very accommodating man who is a visual artist and found the goats to be an inspiration for his work. They started sleeping on his front steps, but every day when he opened the door they would take off. After a couple months the guy said he had relatives coming to visit and he couldn’t have the goats pooping all over the place anymore. I came up with a solution, but it cost me a lot more than goat cheese: I hired a local veterinarian to come with a stun gun and shoot them.

Stun guns aren’t accurate from more than about 30 feet away, so the veterinarian and I spent the better part of a sweltering August afternoon stalking them through the woods until she could get close enough for a shot. We scooped up the little drugged goats and plopped them down inside a much taller fence on my client’s land. Half an hour later they woke up and went about their lives as if nothing had happened. I ended up selling the goats to the landowner who years later informed me that he had slowly tamed them, and that they now eat out of his hand.

Brian Barth is a contributing editor at Modern Farmer. He used to raise goats, chickens, pigs, and other critters on his farm in Georgia. But now he just writes about farming.

I laughed so hard reading this article because for years, I have been talking about raising goats. Not sure I am ready for such an adventure ?

Funny stuff! I have also raised goats and they provide PLENTY of entertainment. Although I can’t believe you felt the need to use a stun gun – it’s time for you to learn how to lasso.

Did you know that goats are multipurpose? They provide us food and drinks and help us to produce food by giving us manure and urine thus they are also good at fertility boosting and preserving the environment.

Lauren, I am dying to know how to lasso a goat that you can’t get 30 feet from. That would be quit a rodeo winning feat. Especially if you can do easily, repeatedly and on command.

I did not know that having a buck around caused an odor to the milk! I’m always learning.

An unkempt fence and keeping goats maketh for war with thy neighbor!

Entirely entertaining. and ALL so TRUE

entertaining and informative – nice article. Write about more of you adventures.

This article is so informative and SO entertaining ??? Thank you for writing it!!!