The Fall Rut Has Arrived: 7 Tips for Breeding Goats and Sheep

Are you animals acting frisky? Time to find them a mate. 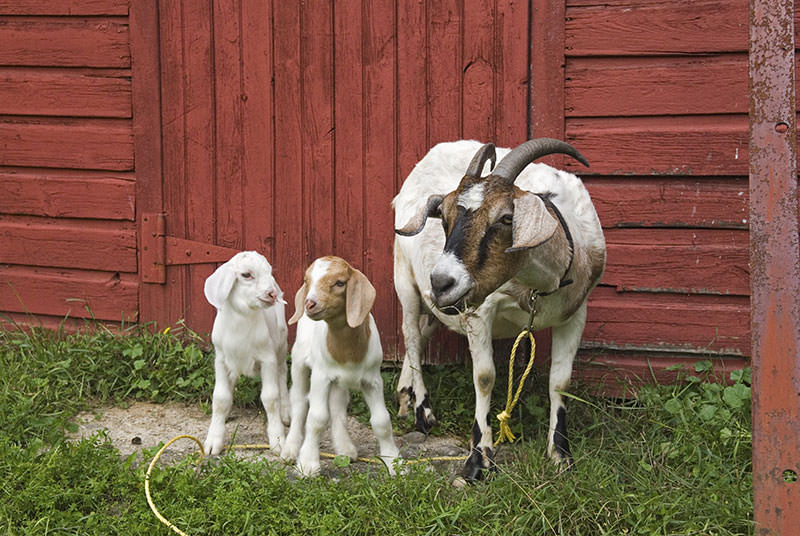 The process of domestication has largely eliminated the seasonal breeding cycle in many types of livestock, but most goats and sheep are still attuned to this ancient rhythm. The shorter days at the end of summer triggers hormonal changes in goats and sheep, whose estrous cycle typically occurs from September through December, with October and November being the prime breeding season. It’s possible to induce estrous at other times year using hormone therapy or artificially regulating day length with lights, though it’s primarily large-scale producers who employ these methods. Artificial insemination is also an option.

Small-scale farmers and homesteaders, on the other hand, typically rely on old-fashioned romance. Breeding goats and sheep is certainly not rocket science – animal instincts are pretty foolproof – but just like in every other aspect of their life, a little bit of management and TLC goes a long way toward preventing chaos, and meeting the needs of the farmer. Here’s a few pointers to get you started.

1. Start with a Spreadsheet

Record-keeping is essential for tracking the estrous cycle of the females: which females have been bred to which males, when they were bred (and thus when they will give birth), and other aspects of reproduction. Ultimately, you will develop a family tree for your herd, which will be a big help for future decisions about which animals to breed based on the genetic characteristics of their offspring. Here is a typical breeders spreadsheet, provided by Fias Co Farm.

2. Get to Know the Estrous Cycle

Female goats and sheep are “fertile” for only a brief period during each estrous cycle, which lasts for an average of 17 days in sheep and 21 days in goats (plus or minus a few days on either end). There is a 24- to 36-hour window of peak fertility in which to get the job done, so you need to be prepared with a suitable mate. Fortunately, female sheep and goats make it pretty obvious when they’re fertile: they bleat and carry-on incessantly during this period, with their tail erect and wagging vigorously, especially if you touch them on the hindquarters. Oddly, a female in heat is often seen mounting other females. When they’re really ready to go, the vulva becomes swollen and pink, and usually trips a clear, viscous fluid.

Males and females are generally kept separate except for the purposes of breeding. With dairy goats, the hormones that the females produce when bucks are present makes their milk extra “goaty” (that’s not a good thing), but it’s just as important to know exactly who mated whom and when they did it. You don’t want brothers and sisters, sons and mothers, or fathers and daughters copulating – they will do so happily if given the chance – but you do want to breed strategically, mating only your healthiest, most productive (and unrelated) animals. Ideally, the males are kept in a separate part of the farm where the females can neither see nor smell them.

Many folks prefer to rent a male, rather than keep their own. (You can read about – and laugh at – my experience with renting males here.) Stud services may be found on Craigslist, the bulletin board of your local feed store, through local livestock associations, or just by asking around. Now you can see why it’s important to track the estrous cycle – if you know approximately when your girls will go into heat, you can make the appropriate arrangements with the stud’s owner. You’ll need to be prepared to have him brought to you or vice-versa. As soon as you see the telltale signs mentioned above, alert the other party that Operation Copulation is a go.

The date doesn’t need to last much more than an hour; probably, it will be over within 20 minutes. They aren’t shy (usually, but see below). If the time is right, it is love at first sight – with lots of nuzzling, bleating, urinating, strange farting noises (from the male), and other signs of affection. If the time is not right, the female will run from the him, fight him off, and not allow him to mount. But if all goes smoothly, he will mount her several times in a short period. The old farmer’s adage is that you know it’s a “good one” – meaning successful – when the female arches her back. You just want to be there to make sure something actually happened, as it’s very hard to confirm pregnancy without an (expensive) ultrasound. If the female doesn’t go into heat again a few weeks later, you can assume she’s pregnant.

Got a girl that won’t go into heat? It’s not uncommon, especially the first time. One common trick is to take an old shirt and rub it all over the buck; then leave it in the pen with the shy doe. A buck’s swarthy odor is often enough to jumpstart those hormones. Or if you have your own buck, let them spend a little time together – a few weeks later you’ll likely see signs of estrus. As with humans, some males are sterile and some females are infertile, which are generally genetic conditions that cannot be remedied. Sexual ambiguity, which experienced livestock owners will tell you is quite common, is also a challenge when it comes to breeding. These animals may not be capable of having kids of their own, but can be integrated into the herd as loving aunties and uncles.

Goats and sheep become sexually mature when they are a few months old, so make sure the males are castrated at this point, or separated. Females may be bred in their first rut season as long as they are big enough – if they are at least 70 percent of the mature weight for their breed when mated, they can give birth without complications. The average gestation period for goats is 150 days from conception until birth; for sheep, it’s about four days shorter. So mark your calendar accordingly and be prepared for the birth within a week window before and after the calculated birth date – not a good time to plan a vacation.

This is a well written article. Thanks for this.

I’m impressed with past articles I’ve read from modern farmer.

Popular
The Future of Hay Drying in AmericaLindsay Campbell
How to (Actually) Get Rid of Fruit FliesEmily Baron Cadloff
7 Smokable Plants You Can Grow That Aren’t MarijuanaBrian Barth
6 Gardening Shows to Watch for Backyard InspirationEmily Baron Cadloff
7 New Cookbooks We’re Cozying Up With This FallShelby Vittek
Explore Modern Farmer
Related
Environment, Technology
The Future of Hay Drying in AmericaLindsay Campbell
Food & Drink, How-To
6 Ways to Preserve Your HerbsLindsay Campbell
Animals
This Enormous, Deadly Bird Might Have Been Domesticated Before the ChickenDan Nosowitz
Can Yogic Farming Help Boost Crop Yield?Aishwarya Jagani
wpDiscuz
We use cookies on our website to give you the most relevant experience by remembering your preferences and repeat visits. By clicking “Accept”, you consent to the use of ALL the cookies.
Cookie settings ACCEPT
Privacy & Cookies Policy