Meet the Beagle Brigade: Protecting American Ag One Sniff at a Time

If you try to sneak plants, meat, or other agricultural products into the country, you're likely to get busted by federal agents with floppy ears and wagging tails. 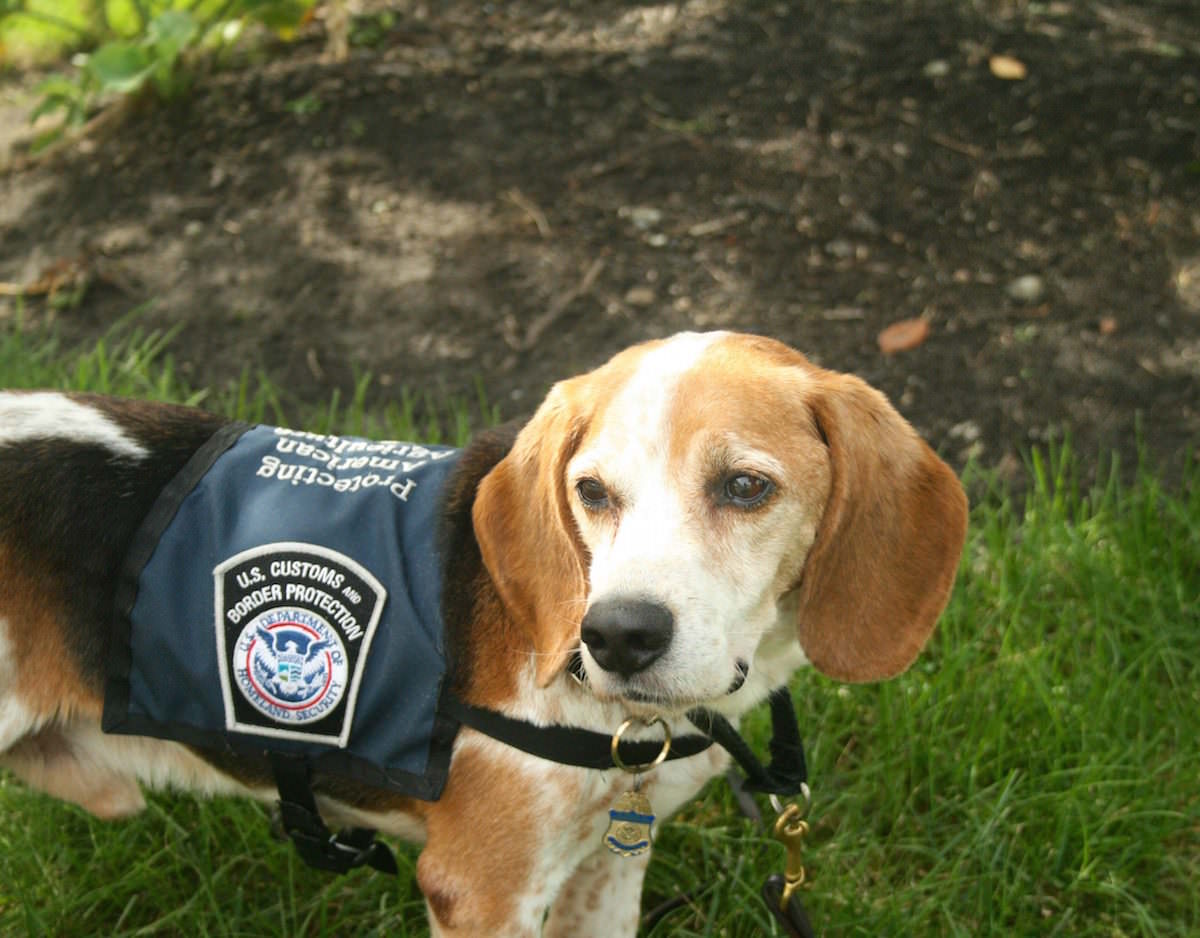 Jasper, an eight-year-old beagle-bluetick-coonhound mix with some of the sweetest brown eyes you’ve ever seen, was a member of the Beagle Brigade, which for the last 20 years has been the front line of defense in protecting America’s food supply at our international airports. The Brigade is made up of 114 teams of dogs and their handlers, who are agricultural specialists in the U.S. Customs and Border Protection agency. Every international airport in the country has at least one team made up of a dog and its handler. Kennedy International Airport in New York City has five, plus two teams of Labrador retrievers. Terminal 4, the airport’s busiest terminal averages 50,000 passengers a day. That’s a lot of baggage potentially carrying a Pandora’s Box of invasive species.

That’s where pups like Jasper come in. Just before he retired, I hung out with Jasper and his handler, Agriculture Specialist Amanda Tripple, in Terminal 4 to watch the pair in action. Flights from Amsterdam and Japan were landing, spilling out hundreds of passengers. Tripple and Jasper unobtrusively weaved in and out of the crowds, until Jasper signaled to Tripple, either by nosing the bag or sitting, that he’d smelled something. In one case it was an apple, which was seized, and in a few other cases it was dried fruit, which is allowed in. While the dogs are trained to sit down next to the baggage when they smell contraband, Tripple and Jasper are so in synch, Tripple says, that she can immediately tell by Jasper’s subtle movements that he’s keyed in on a fruit, vegetable, or meat product. 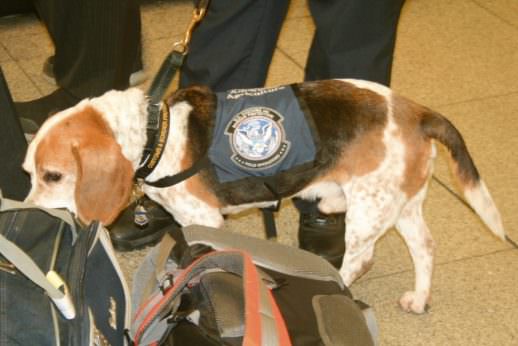 According to Anthony Bucci, a public affairs specialist with U.S. Customs and Border Protection, the general public doesn’t always understand how important an agricultural specialist’s job is. “There is always the misperception that we’re just taking [the food] to take it or that we’re bringing it home and eating it,” he says. In reality, everything that’s confiscated gets ground down or incinerated. The idea is to keep any of this stuff from getting out of the airport and onto farms in the United States, because when invasive species do make it in, devastating consequences often result. Take, for example, the giant African snail that has been eating its way through Florida cropland, the emerald ash borer, an insect from Asia that has been decimating white ash trees in various parts of the country, and the Asian citrus psyllid, which attacks citrus trees.

“If we’re seizing a salami, an apple, or an orange, we’re doing that to protect the public. We’re protecting American agriculture. We work for the farmer,” says Border Protection Agriculture K-9 Supervisor James Armstrong, one of the founders of the Beagle Brigade. “If one of these pests get into the country it could mean no longer being able to grow some agricultural products. American farmers don’t only feed us, they feed the world.”

While federal agencies like the DEA and TSA rely on bigger dogs, like German shepherds, to sniff out drugs and explosives, the U.S. Customs and Border Protection agency uses beagles for their great sense of smell, high food drive, and more importantly, their gentle demeanor, an important factor when they’re at close quarters with thousands of passengers a day. “It’s a friendly breed. We’re in and out of the passengers. It’s just easier to use that type of dog,” says Tripple. “One time I had a little girl scream ‘Snoopy’ from across the terminal. She ran over, slid on her knees and was hugging Jasper. It was the cutest thing.”

The dogs in the Beagle Brigade all come from either shelters, rescues, or from private homes where the owners can no longer care for them for various reasons. That was the situation with Jasper who has been a federal agent (with his very own badge) since he was around three and began working with Tripple. The dogs and their handlers stay together throughout the dog’s career, never switching partners. The training period lasts three months, and the canine graduates come to work knowing five basic scents: beef, pork, citrus, mango, and apple. They quickly learn other scents by association and build up a repertoire of more than a hundred, including being able to sniff out such exotic produce as starfruit.

Jasper has sniffed out live turtles, bear meat, whale meat, a cooked bat, and even an entire goat head found in passenger’s baggage. More importantly, he located a plant with an invasive insect species on it, a find that ended up helping to change the federal regulation concerning importing citrus from the Dominican Republic into the U.S., says Tripple. Most of the time he sniffs out less exotic things like bananas and apples that passengers have forgotten they had with them, but in other instances it’s contraband meat, seeds, and plants people are actively trying to sneak in for themselves or to sell.

“Once Jasper found a pig leg tied to the side of a bag. They told me it was a tennis racket and had wrapped it to look like one,” Tripple says. “I couldn’t understand why Jasper wouldn’t stop digging at it until I realized what it really was.” 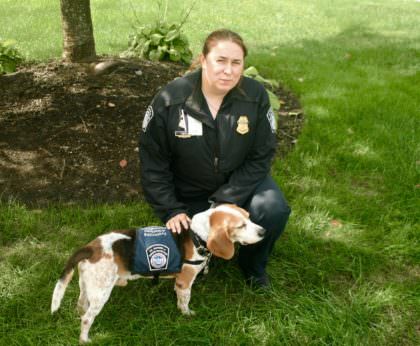 In Jasper’s heyday he could sniff out 20 to 30 hits, but he has slowed down to between 10 and 15, so he’s been retired from the Brigade. Tripple says the mandatory retirement age is eight and although they could probably go beyond that age, the agency wants the dogs to have a life outside of the airport. Some dogs retire early if they no longer seem to be enjoying the job or if they have health issues. The handler gets first choice for adopting their canine partner, and if they can’t do it, there are many other handlers willing to take the pups home.

“I’m absolutely taking him. That’s my baby,” says Tripple. “It’s going to be a big transition for me. I’m looking forward to working with a new dog but I’m going to miss not having Jasper as my partner everyday even though I’ll get to see him at home. He’s going to transition perfectly. My cats on the other hand…”