The organic food movement in Brazil is relatively tiny - but growing at a breakneck pace. 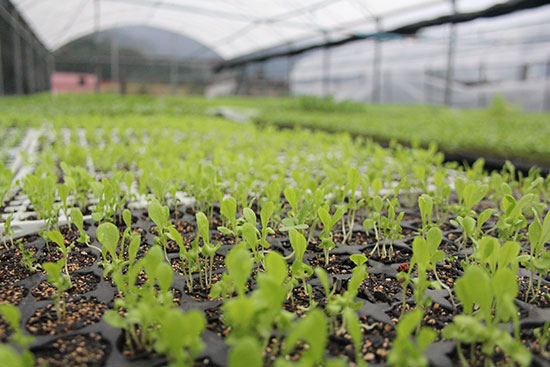 FÁ¡tima Anselmo, owner of OrgÁ¢nicas da FÁ¡tima, grows organic produce in a reclaimed quarry in Rio de Janeiro. Pea vines climb bamboo stakes to her left, while banana leaves spread on the ground behind her protect a bed recently planted with carrot seeds. After finding the site in 2014, she spent more than a year and a half clearing it of rubble and building the soil from her own compost pile.
Share
Tweet
Pin
Email
2K Shares

The whole place, in fact, is bursting with life. Organic greens and peas and carrots grow in neat beds that checker the ground; nasturtium blooms add a splash of brilliant color. Inside two greenhouses, tightly packed trays of seedlings and microgreens form a sort of electric green carpet. And the dripping, chirping forest just outside appears poised for invasion. It’s a testament to nature’s resilience – and Anselmo’s determination – that only a few short years ago, this was an industrial wasteland, strewn with piles of rock and trash.

“I achieved my dream in this beautiful spot,” says Anselmo, of her bustling farm, Orgânicos da FÁ¡tima. “A dead place has come to life.”

Back in the late 1990s, Anselmo decided it was time for a career change, ditching her job as a teacher for farming. She lived in the mountains that rise above Rio, and getting her operation off the ground proved difficult. Eventually, though, she was delivering fresh vegetables to the city three times a week, selling to restaurants, hotels, and direct to consumers. Then, in early 2011, a torrential downpour and devastating flood washed most of Anselmo’s operation off the map (a tragedy dwarfed by the disaster’s death toll of more than 900).

One of Anselmo’s two greenhouses (this one full of lettuce) was erected on the ruins of an old quarry building. She renovated an adjacent part of the old structure into office space and a prep room.

For a short time, she moved to another piece of land in the mountains, but, tired of the hours-long delivery trips and intrigued by the idea of urban agriculture, she began using Google Maps to scout plots closer to the city. In 2014, she spied a promising bit of open land in ItanhangÁ¡, on an ocean-facing hillside overlooking the ritzy part of Rio where the Olympic Village has since been erected. She paid a visit in person, ran her ideas past the owner, and walked away with a lease. There was a catch, though: Since the quarry shut down decades earlier, the land had become a dumping ground. It looked more like a war zone than farmland, and Anselmo’s friends, her financial adviser and even her husband tried to talk her out of what seemed, to them, a fool’s errand.

She plowed ahead and spent more than a year and a half hauling out rubble and trash and renovating a ruined building (now office space and a prep room). She harvested organic produce on site in 2015; along the way, the naysayers have become believers.

The success of Orgânicos da FÁ¡tima owes much to Anselmo’s loyal clients, who encouraged her from day one of her quarry reclamation project. Acclaimed Rio chef Robert Sudbrack, of the eponymous farm-to-table restaurant, describes Anselmo as an innovative farmer who tends her crops with love and skill. “She grows jewels on that farm,” Sudbrack told Modern Farmer in an email. “Supporting small farmers is crucial. Our work isn’t possible without them.”

Microgreens are one of Anselmo’s main products, prized by the roughly 30 Rio chefs who buy from her.

Anselmo estimates that restaurants and hotels make up about 70 percent of her business. (The Olympics – great news for any host city’s hospitality industry – have been very good to Orgânicos da FÁ¡tima). The rest of her sales take place at the organic farmers markets that have begun popping up all over Rio; a decade ago, there was a single such market in all of Rio, according to ABIO, an organic farmer’s association. Today, there are 19.

“People are talking more about the markets now,” says FlÁ¡via Semenow, a nutritionist and regular customer of Anselmo’s, who stopped by the booth at a Tuesday market in the quiet neighborhood of Laranjeiras. Her phone is full of pictures of dishes she’s made, sprinkled with Anselmo’s microgreens and edible nasturtium blossoms, called capuchinha in Portuguese. That Laranjeiras market, with around a dozen vendors, is a relatively small one. Anselmo frequents six other markets through the week; the biggest are on Saturdays in Jardim Botânico and Tijuca, two districts separated by the Corcovado, the iconic mountain topped with the towering statue of Jesus.

As a whole, the Brazilian economy is two years into a historic recession that has cost the country millions of jobs. This little organic farm in ItanhangÁ¡ has won a handful back. Anselmo’s two teenage sons help out at the weekend stands. Two sisters and a brother are among the 10 people employed at Orgânicas da FÁ¡tima. A brick mason who helped renovate the farm office is now an employee, as is a woman who worked for a time as a housekeeper for Anselmo.

Nasturtium blossoms liven the display at a farmer’s market in Rio de Janeiro, one of seven in the city where Anselmo sells her produce.

Organic farmers in Brazil still face plenty of challenges, Anselmo says, but the general trend is extremely positive. The country’s organic food sector grew by 25 percent in 2015, even as the national GDP fell by 3.8 percent. With less than 1 percent of market share, the organic scene in Brail is still tiny. But good news is good news, and it’s been in short supply in Brazil of late.

Progress has come in fits and starts in her nearly 20 years in the business. But here in ItanhangÁ¡, the vibrant farm – dotted with blooming borage and calendula, radish beds, banana trees, and an herb garden – represents unqualified victory.

“I always wanted to show that urban agriculture was possible,” Anselmo says. “If everyone did just a little bit of this, we’d have much healthier food and a much healthier world.”