The Danish restaurateur is creating an ambitious space that's as much food-for-thought as farm-to-fork. 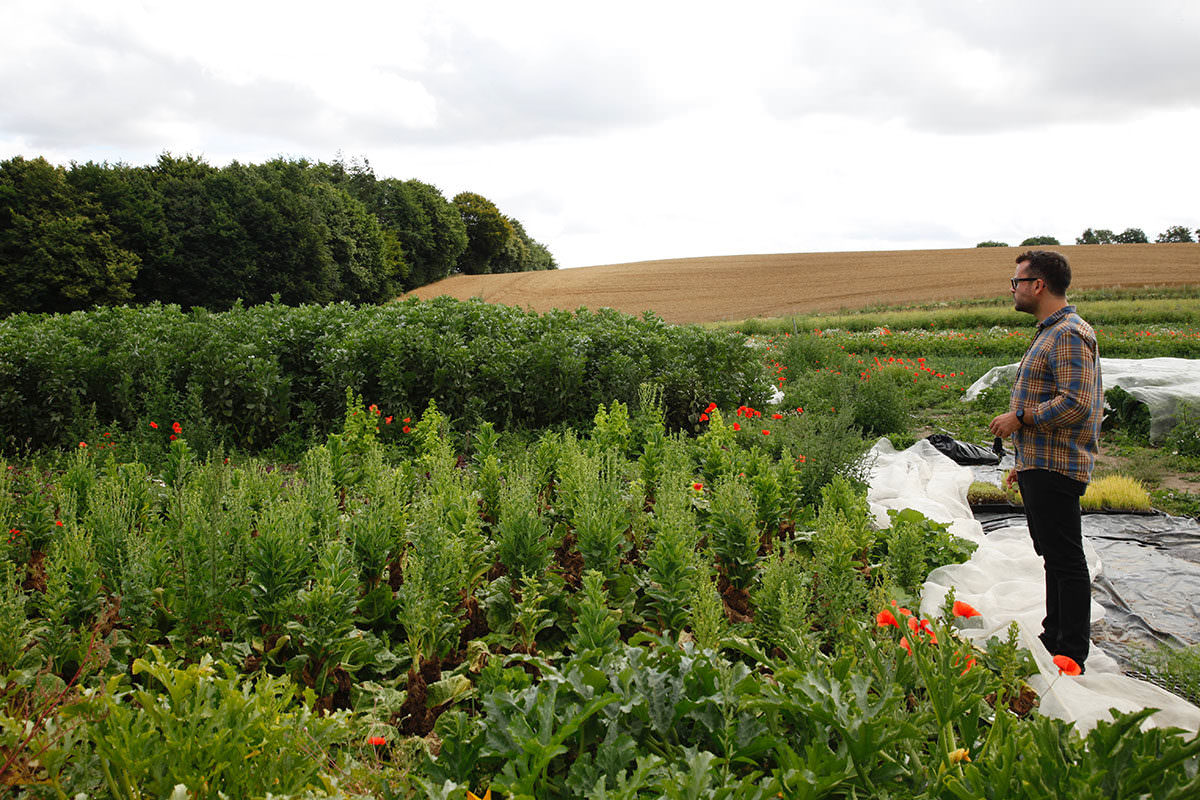 Christian Puglisi is clutching two courgettes and a carrot when I meet him at Mirabelle – one of four restaurants the acclaimed Danish chef owns in Copenhagen. We’re off to visit the Farm of Ideas – an organic farm 40 minutes west of the capital – and I assume the vegetables are a sneak preview. The 34-year-old smiles and crunches into a courgette. “Breakfast.”

Puglisi is one of Denmark’s most successful chefs. His flagship restaurant, RelÁ¦, is the recipient of a Michelin star and an entrant this year in the much-ballyhooed list of the World’s 50 Best Restaurants. It’s also a two-time winner of the award for the world’s most sustainable restaurant. But the Farm of Ideas is the Noma alum’s most ambitious project to date. And the clue’s in the name. Puglisi’s latest wheeze is as much food-for-thought as farm-to-fork.

The Farm of Ideas lies in Abbetved (population: 36) – a hamlet in Lejre, which Puglisi describes as the most “proactive and progressive” municipality in Denmark, thanks in part to its commitment to organic farming. Right now, the farm boasts a barn that’s seen better days, several dilapidated buildings, a poly-tunnel, and 50-odd crops – including kohlrabi, broccoli, and broad beans – on two hectares. “We’re rolling,” Puglisi says about the farm’s food production, as he squeezes several pallets of Mirabelle plums into the trunk of his car. 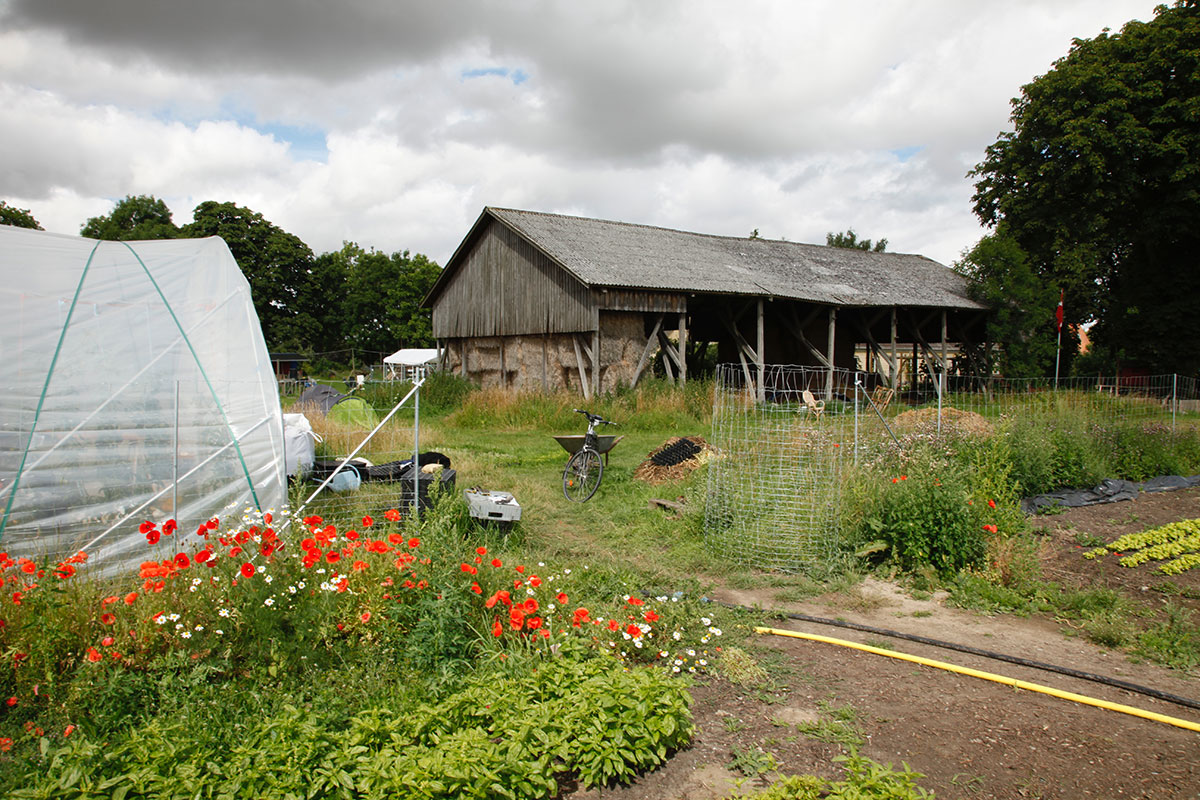 A polytunnel, barn, and vegetables growing on the Farm of Ideas in Abbetved, Denmark. 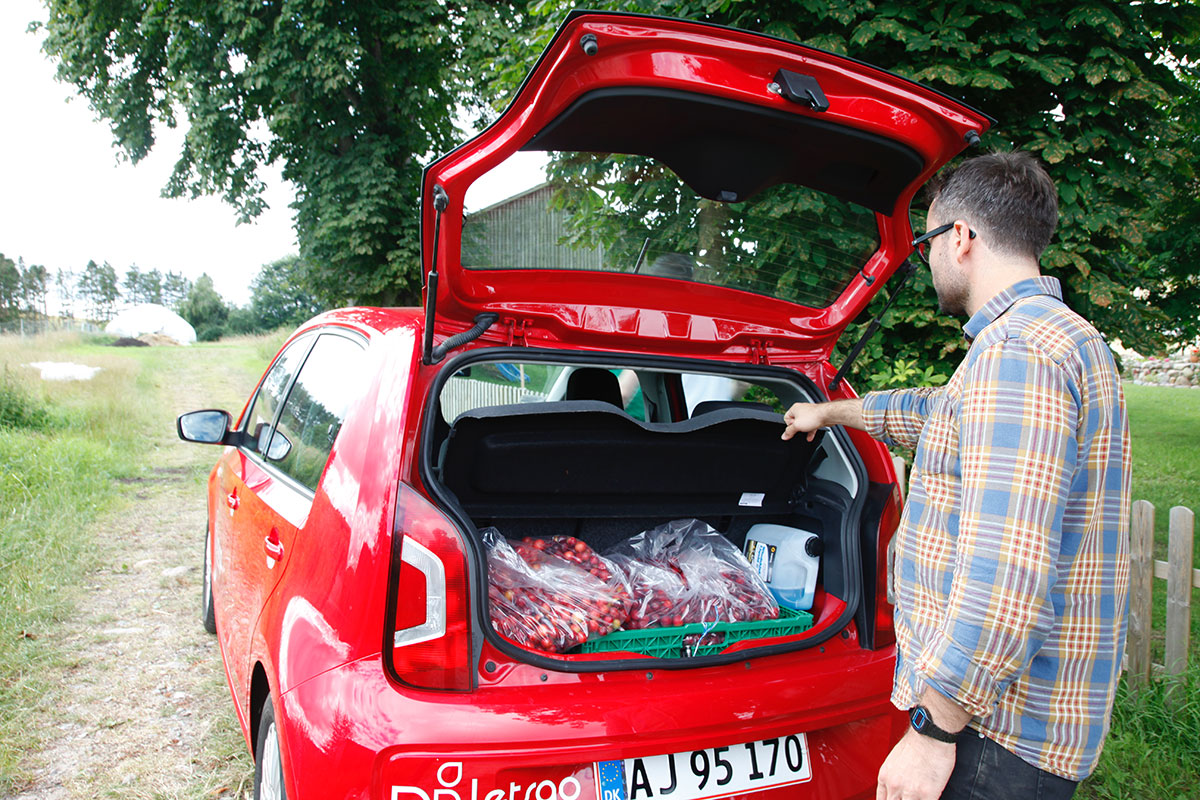 Puglisi loads his car with Mirabelle plums harvested at the Farm of Ideas.

The farm also has at least 10 hectares (about 27 acres) of pasture: Puglisi recently bought eight Jersey cows and their imminent arrival has him beaming with joy. “I can’t wait to get them,” he says. “I’m looking forward to seeing how the raw milk influences our cheese.” Indeed, one aim of the farm is to supply food for Puglisi’s restaurants – including BÁ¦st, a pizzeria that makes its own mozzarella, ricotta, and mascarpone, and Manfreds, which brags about being “probably the world’s only veggie-focused restaurant famous for its raw meat.”

So far, so farm-to-table. And somewhat flavor of the month, too: Puglisi’s plans come as his former boss, René Redzepi, prepares to re-launch Noma as an urban farm. But the comparisons stop there. To grasp what makes the Farm of Ideas so interesting – and potentially groundbreaking – you have to consider Puglisi’s plans for the 2,200 square meters of dilapidated buildings. Eschewing the “conventional, boring idea of creating a restaurant,” he says, Puglisi wants to restore the structures and create a “melting pot for innovation, gastronomy, and organic agriculture.” (To do so, he has sought funding from Realdania – an association that supports philanthropic projects in the built environment.)

Puglisi proposes turning one building into a kind of open-source, experimental workshop where food producers, farmers, and chefs can exchange ideas, get training, or expand their knowledge of, say, cheese-making or fermentation. The second building will be a culinary school, where professional chefs can attend courses on gastronomy, innovation, and agriculture, benefitting from direct links to the farm. The third building – a breathtaking space reminiscent of a cathedral, thanks to its vaulted ceiling – will stage events and potentially house a café and a bakery. The first floor of one building will have accommodation for at least 30 people. 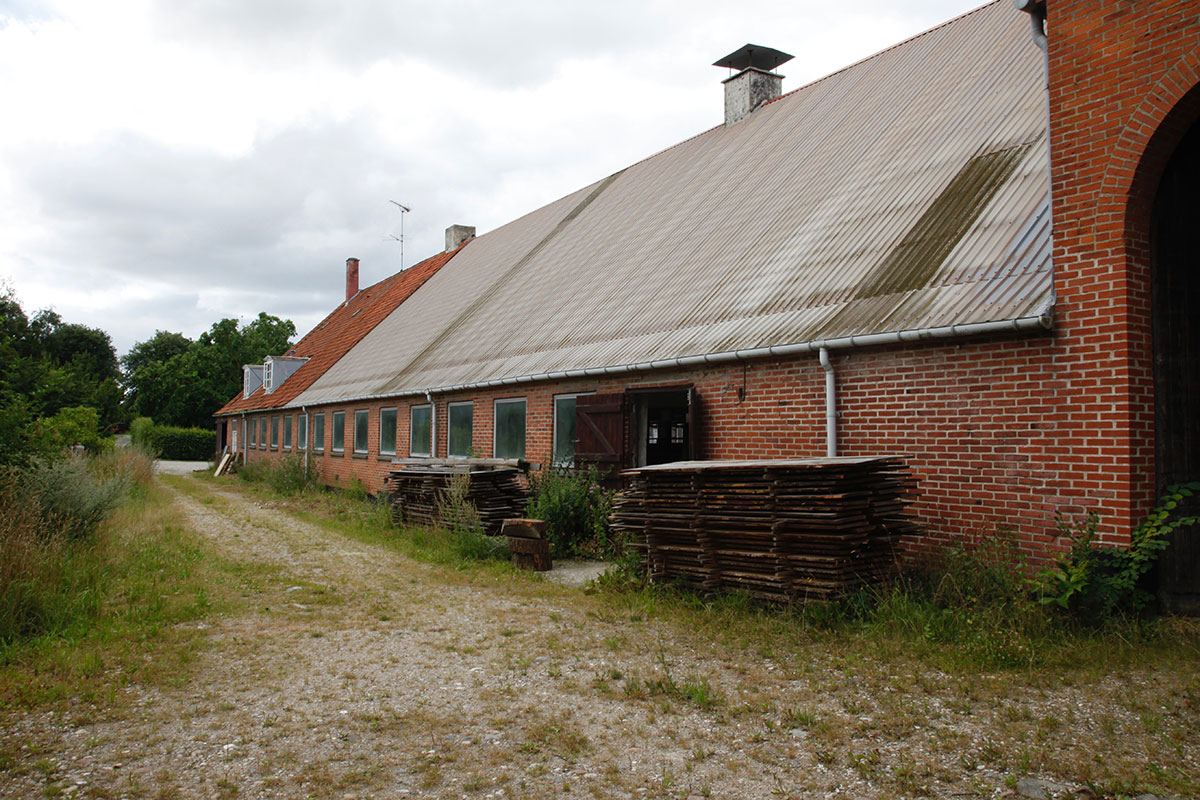 The exterior of a farmhouse building which Puglisi hopes to repurpose. 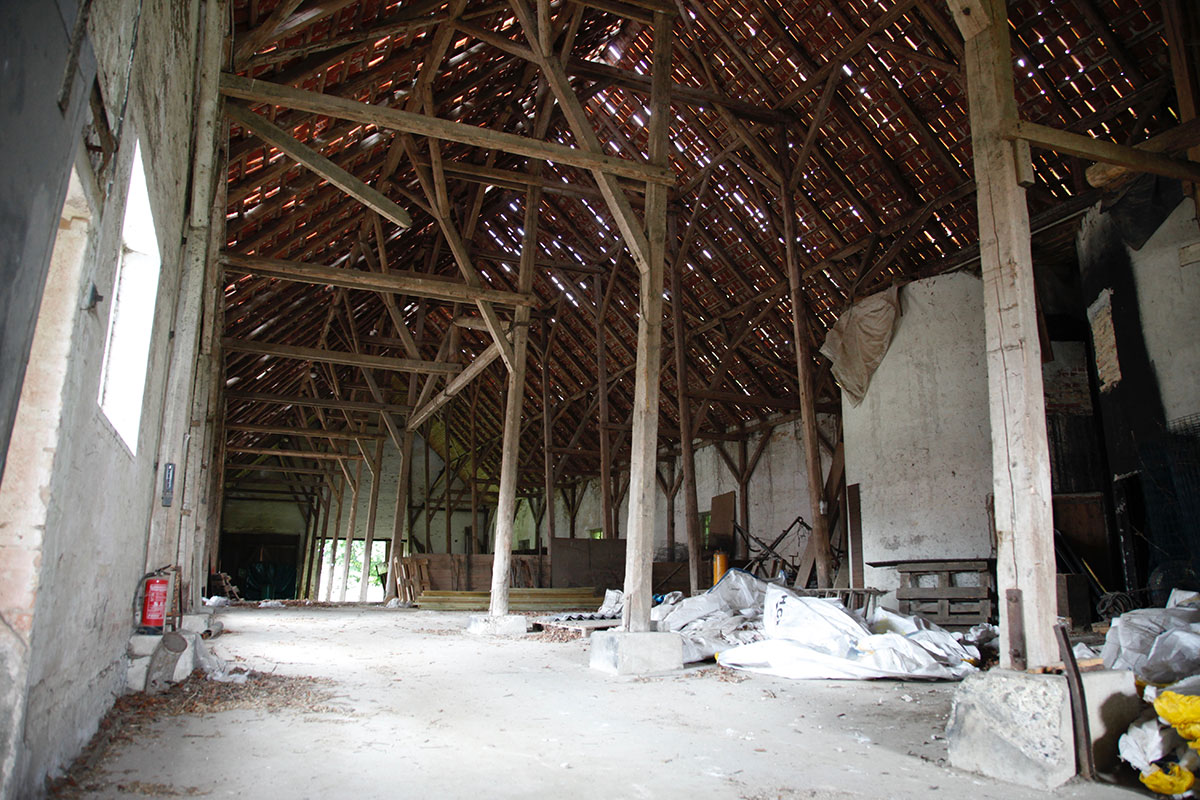 The interior of farmhouse building which Puglisi hopes to renovate and use to host events, and house a café and bakery.

The aim, Puglisi explains, is “to create a space that can inspire other people.” Specifically, he wants to create a kind of symposium for food producers and chefs from around the world to gather and interact with local producers and farmers. “We want to be international – both in the sense of people traveling to this small part of Denmark, but also of flying in a cheese wizard from somewhere and maybe doing a two-day course for local people,” he says. “I want to have a place where Dan Barber and his farmer could come and do a workshop – and, instead of six foodies and two journalists, you’d have people from the local area getting something out of it.”

Unsurprisingly, then, one of Puglisi’s inspirations was the Stone Barns Center for Food and Agriculture, in upstate New York – home to one of Barber’s restaurants and a “hub for the exchange of ideas.” Another inspiration was the Ballymaloe Cookery School and organic farm, in southern Ireland, which Puglisi visited a couple of years ago when he was promoting a cookbook. Knowing the farm had to be near Copenhagen, Puglisi began looking for suitable land to rent about a year ago. Having settled on a rural estate in Lejre, he was soon introduced to Lasse Linding, a 27-year-old local farmer.

Linding had dropped out of his college agronomy course to go traveling. (He ended up visiting farms in Spain, Greece, and – improbably – Iceland.) Having returned to Denmark to attend agricultural school, he soon dropped out of that too, and wound up on a dairy farm. About a year ago, he started producing his own crops. “Farming is fun. There are so many different tasks,” Linding says. “It’s not just harvesting and milking cows. It makes me use my head. I need challenges all the time or I get sad and bored.” 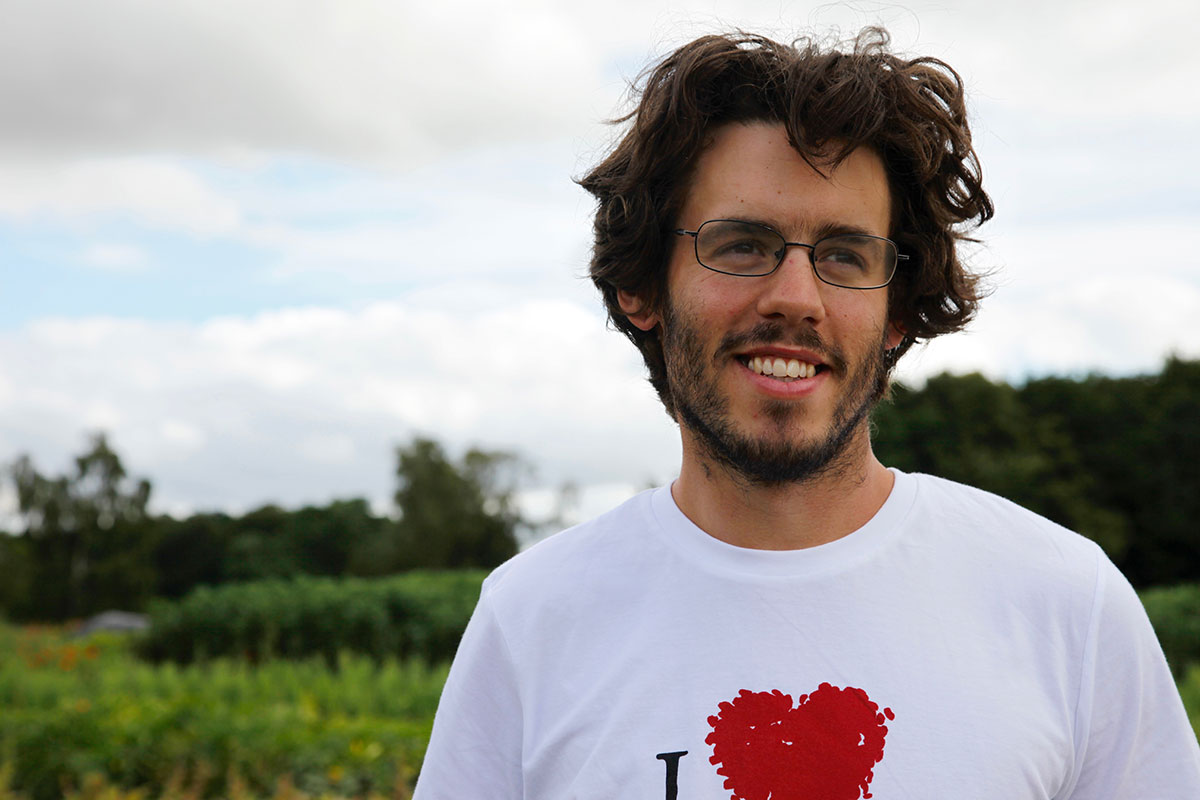 Lasse Linding, farmer at the Farm of Ideas.

Puglisi says Linding is “young enough to be open-minded but experienced enough to know what he’s doing.” He says he knew they’d work well together when Puglisi explained his plan to own cows and make mozzarella: “I thought he’d think I was nuts,” Puglisi says, “but he said, ‘I love vegetables, but cows are my dream’. I was like, ‘I don’t know where you showed up from, but we are so game’.”

A feasibility study will be wrapped up this month and, if funding from Realdania comes through – Puglisi is hoping for 30 million to 50 million Danish kronor ($4.5 million to $7.5 million US) – renovation work will begin on the buildings. In the meantime, the farm is starting to produce plenty of fruit and vegetables – along with fresh challenges. “This will completely change the way we work,” Puglisi says. “Instead of being on calls and saying, ‘So, we need 10 kg of broccoli’, we really need to adapt much more to what’s going on and get a different sensibility. But it’s really fun, really challenging, and really different.”