Why Did This Cherry Farmer Dump 40,000 Pounds of Fruit on the Ground? 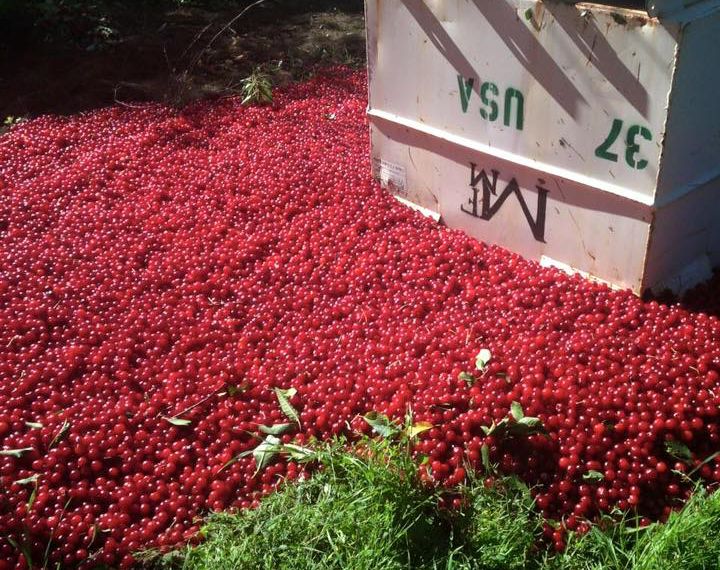 Here’s the caption Michigan cherry farmer Marc Santucci posted alongside the picture you see above:

These cherries are beautiful! But, we have to dump 14% of our tart cherry crop on the ground to rot. Why? So we can allow the import of 200 million pounds of cherries from overseas! It just doesn’t seem right. What do you think? Please share this on your Facebook pageðŸ’ðŸ’ðŸ’. Just to let everyone know we are not allowed to donate or in any way use diverted cherries. I have people who would buy them if I could sell them. Also these are tart cherries with a very short shelf life.

So here’s what’s going on: The market for tart cherries is a strange one, because the harvest is volatile (this season’s harvest is estimated to be 30 percent higher than last year’s), and because tart cherries generally require processing. Since the fruits are extremely delicate and also very sour, that processing is necessary to get them frozen or into cans as quickly as possible.

Because the harvest can swing so dramatically from one season to the next, there exists a Cherry Industry Administrative Board (CIAB), which exists theoretically to protect cherry farmers. In a year like this year, with such a bountiful harvest, the laws of supply and demand would likely drive the price of sour cherries down to even below production costs, meaning the farmers would actually be losing money. So the CIAB sets limits on how many cherries each farmer can sell per year.

The CIAB has the force of law behind it; the USDA administers it, and membership is compulsory for growers (who also have to pay a per-pound rate). This is true of most sectors of agriculture, and lawsuits have occasionally been filed out of anger from farmers at the impenetrable and sometimes strange but mandatory moves of organizations like the CIAB.

This year, with such a surplus harvest, Santucci was forced to dump 14 percent of his crop, right on the ground. The CIAB would say he is not technically required to dump them; he could donate them to charity or export them. But Santucci says that the high cost of processing makes charity not really feasible, and that exports are basically out as well. In a response to an article posted by the Michigan Farm Bureau, he wrote, “[Executive director of the CIAB] Perry Hedin says that we can export our surplus cherries. How likely is that when we already lost our export market and are trying to fend off growing imports?”

Santucci’s frustration also lies with the large amounts of tart cherries being imported to the US, largely from Turkey. These imports are without limits, and the CIAB’s rules have to take those imports into consideration, meaning tart cherry farmers have an even smaller pie to compete for.

Defenders of the CIAB say that the restrictions are in the best interests of growers; after all, by limiting the availability of the cherries, the farmers do stand to make more money than if left solely to the market, they say. But without any real programs for making use of excess cherries, what the farmers are really left with is what Santucci posted: a pile of delicious tart cherries on the ground, waiting to rot.