Here’s Something for Organic Farmers to Obliterate Weeds With: Grit 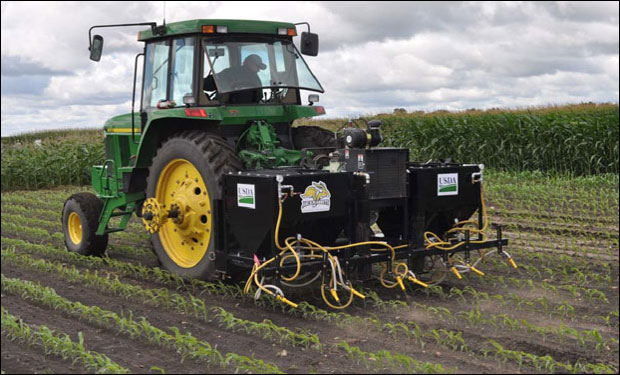 The USDA agronomist was sure he could find a use for the waste, and a few web searches revealed that fruit processors often grind up pits to use in sand blasters. This led to a less obvious question (though likely more obvious to a weed scientist): Can weeds be killed with a sand blaster?

“[The idea] sounded too silly initially,” Forcella says. But he and a colleague, Dean Peterson, at the USDA North Central Soil Conservation Research Laboratory in Morris, Minnesota, kept batting it around. “Eventually, we bought a cheapo sand blaster and started some simple experiments in a greenhouse.”

Their initial work involved growing weeds next to a corn plant; when the corn was about six inches tall and the weed was about one to three inches tall, the researchers blasted both with a split-second application of grit.

It turned out that only the weeds got hurt. In fact, they vanished, while the corn plant was fine. This prompted a field experiment in 2012 with a bigger sand blaster mounted on an ATV. While Peterson drove, Forcella followed, crouched over with the sand blaster nozzle, blasting pigweed and other pesky sprouts.

These first handheld machines were promising, if not a bit back-breaking for the one doing the blasting. But the researchers were encouraged by the results. So Forcella sought funding to work on a larger machine, and began collaborating with researchers – including Dan Humburg, a professor of agricultural engineering at South Dakota State University – who had the skills to build it.

After Forcella nabbed a Sustainable Agriculture Research and Education grant for an “Air-Propelled Abrasive Grit Management” system, they set to work on a grit-blasting machine that weeds row crops like corn. The main component of the machine, known as PAGMan, is an air compressor that sends pressurized air to nozzles aimed at the bases of crops. Farm residues, fed into the nozzles, are drawn through the fast-moving air. Most gritty leftovers – from seed meals to nut shells, fruit pits, and corn cob grits – will work. (A current favorite of Forcella’s is granulated poultry manure: “We can weed and feed at the same time,” he says.) PAGMan has four pairs of nozzles and shreds weeds up to two inches high, but it leaves corn plants four inches or taller intact. Two applications – at corn’s three- and five-leaf stages – provide about 80 percent season-long weed control, Forcella says. Field trials with the PAGMan, in corn and soybeans, are taking place this summer in Minnesota and South Dakota to corroborate that.

A second model, the Veggie Blaster, is overseen by Sam Wortman an assistant professor at the University of Nebraska. The machine specializes in vegetables, which have much wider row-spacing. Pulled by a small tractor driven between two rows of vegetables, it kills weeds in a single row. Typically, veggies like tomatoes are grown in trellised rows covered by plastic. As weeds poke through the holes punched in the plastic to transplant seedlings, they are spot-sprayed with grit.

Wortman says they tested the Veggie Blaster in peppers, snap beans, edamame, and zucchini this summer in Illinois. But since this is the first summer the team has experimented with the Veggie Blaster, they can’t share how successful the weed control is yet, he says.

Interest in the method, known as “abrasive weeding,” keeps growing. A two-year field study at the University of Illinois Sustainable Student Farm found the technique may reduce the need for tillage and hand-weeding; and in Spain, a group of collaborators at the University of Seville are developing their version of the Veggie Blaster, which can sense a weed and only turns on when needed.

Exciting, yes, but don’t plan on pre-ordering a weed blaster yet.

“We have no patents on any of this equipment,” Forcella says. “Patents are a lot of work – work that I am not prepared to do. Thus, we more-or-less decided to go the ‘open source’ route. We wanted to float the concept and test the idea. If it works then, hopefully, some company will run with it.”

It’s unclear if equipment companies will invest in the machines, though smaller parts like the nozzle design, might be easier to patent. The main cost is the compressor; the PAGMan’s was $9,000. Forcella expects a retail unit would cost at least $10,000.

On the other hand, home-made units for small operations would likely cost no more than $1,000. Versions of the weed blaster may one day be patented, but for now the public can build their own, Forcella says. “Almost anyone can build a simple rig.”

In fact, given Forcella’s descriptions, Amigo Bob Canistano, a California organic grower and crop advisor, built a veggie blaster for less than $250. It took about three hours. “No major skills needed,” Canistano says, “just common sense.” He bought a sandblaster unit, walnut shell meal, fittings and hose; made a “wand” out of PVC and brass fittings; then attached it to his portable electric air compressor. The device requires a source of electricity, but by mounting it on a cart along with his gas Honda generator, he can now pull it around to a field or trees by hand, tractor or riding lawn mower.

Though grass weeds take repeat applications, with their growing point below ground, Canistano says it works well on others. “If this tool is used at the right timing of weed growth, it is very effective against most weed species, including broadleaf weeds, forbs, start thistle, and scotch broom.”