Farmers are Capitalizing on Carbon Sequestration: How Much is Your Carbon-Rich Soil Worth? - Modern Farmer
Plants

Farmers are Capitalizing on Carbon Sequestration: How Much is Your Carbon-Rich Soil Worth?

As the planet heats up, the economic rewards of storing carbon in the soil are beginning to take shape. 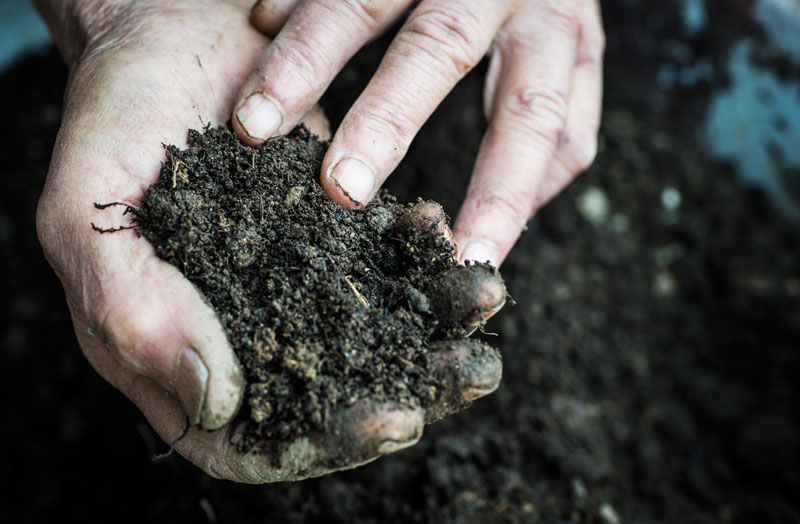 Environmentally-minded farmers are well aware that building up soil carbon is one key to achieving high yields without chemical inputs. It’s through the expansion of global carbon markets, however, where polluting corporations purchase “carbon credits” to offset their carbon emissions, that farmers are starting to get paid for adopting these practices.

When these polluters purchase carbon credits, the money goes to another company, organization, or project that has prevented an equivalent amount of carbon dioxide or other greenhouse gases (GHGs) from entering the atmosphere (which can include a farmer). The transaction is mitigated by a broker, called a carbon registry. In the past, wind farms, solar panel facilities, and reforestation projects were among the most common recipients of carbon credits, but farm-based carbon credits are becoming more widely available. Notably, Australia, Alberta, Kenya, and California now have active programs to reward on-farm carbon sequestration.

Measuring the actual amount of carbon sequestered in soil and plants is a costly and inexact science, which is one reason that farm-based approaches haven’t been widely accepted by carbon credit programs yet. (It’s much easier to quantify reduced carbon emissions with things like solar power.) Rather than measuring the carbon sequestered on each farm, carbon credit programs rely on the average carbon sequestration ability of particular practices (like adding organic matter to the soil, planting cover crops, and reducing soil disturbance) that have been tested over time and scientifically verified. The bottom line is that farmers aren’t expected to calculate their own soil carbon levels – it’ll be inferred by the credit-granting organization based on their farming practices.

To help farmers get an idea of their current climate impacts and prospects for earning carbon credits, however, the USDA now has a free web-based tool called COMET-Farm, which provides an approximate carbon footprint based on user-supplied data and allows farmers to apply different land management scenarios to see which has the greatest carbon sequestering ability.

So how much might a farmer make for their soil carbon? Not much, at least not yet.

Here is how it works: Land-based carbon sequestration is measured in metric tons per hectare (2.5 acres); one metric ton earns one carbon credit, making the math easy. In California – the only state in the US with a full-fledged cap-and-trade program – the current value of a carbon credit is around $12 to $13. (Farmers in other states, by the way, are eligible to earn credits through the California carbon market.) Alberta, which has the most robust carbon market in Canada and rewards several agricultural practices with carbon credits, raised the price of carbon credits from $15 to $20 on January 1, 2016; in 2017, the price will go up to $30 per credit.

According to data analyzed by carbon farming expert Eric Toensmeier, farmers who convert to no-till practices and start using cover crops may achieve a net carbon gain of only one or two tons per hectare each year, though diverse agroforestry systems in the tropics may achieve improvements of 30 or 40 tons per hectare. For example, if a farmer with a 100-hectare farm (250 acres) was able to sequester 2 metric tons of carbon per hectare and sell the credits for $15 each (100 hectare Á— 2 tons Á— $15), they would net $3,000. Depending on the practice, that income might accrue yearly, or it might be a one-shot opportunity.

There are various caveats. Not just any farmer can go sign up for carbon credits based on their soil conservation practices. The rule of thumb is that only farmers who make a positive change to their land management approach are eligible for credits. In other words, as it currently stands, if you already use no-till cultivation techniques, enrich your soil with compost, and plant cover crops, you can’t earn money for those practices. Farmers that are taking over degraded land that has been farmed with conventional practices have the most to gain by getting involved in the carbon market.

Farmers that are taking over degraded land that has been farmed with conventional practices have the most to gain by getting involved in the carbon market.

It’s also important to note that most of the agricultural practices that have been approved for carbon credits to date are not geared to reward eco-friendly carbon farmers, but are intended as incentives to get agricultural polluters to clean up their act: The main beneficiaries thus far are corn growers who commit to reducing nitrogen fertilizer use (which releases nitrous oxide, one of the three main GHGs); dairy farmers who capture methane (another major GHG) from their manure lagoons and convert it to electricity; and rice producers who take steps to minimize the naturally-occurring methane emissions of their paddies.

That trend is starting to change, however. Last year in California, for example, a new carbon credit ”protocol,” as the rules governing carbon sequestration practices are called, was approved: spreading compost over grazed grasslands, the type of landscape where grassfed beef and other pastured animal products are raised. This was largely thanks to a group of dairy farmers north of San Francisco called the Marin Carbon Project. Their research proved that a ½-inch dusting of compost resulted in roughly 1 metric ton of carbon captured per hectare per year. Notably, they found that a one-time application of compost jumpstarted biological processes in the soil that resulted in another ton captured annually for many more years, without the addition of more compost.

To receive compensation for their efforts, farmers in the United States must sign up with a carbon credit registry, such as the Climate Action Reserve, the American Carbon Registry, or and the Verified Carbon Standard. These organizations provide third-party verification much like an organic certifier – an inspector will come out to your farm on a regular basis to make sure you’ve implemented the practices in accordance with the protocol.

Dr. Adam Chambers, an air quality scientist with the USDA who helped to develop the COMET-Farm tool, says the data it provides should pave the way for farmers to monetize carbon sequestration practices as the carbon market matures. How quickly the market develops depends largely on political forces – climate-friendly California became the first state to institute a mandatory cap-and-trade program in 2012, but if the federal government were to follow suit, the value and trading volume of the carbon market could heat up quickly.

If that occurs, Chambers thinks farm-based carbon credits may be positioned to play a significant role. “Different types of credits seem to have different levels of charisma,” he says, in reference to the corporate polluters who purchase credits and their interest in promoting the results of their good deeds. “And the agricultural credits seem to be generating interest because these producers are growing food and fiber for the world.” Making productive use of the land, while improving soil quality for future generations and making an extra few bucks – who could argue with that approach to farming?

would like to keep up to date on modern farming practices, industry trends and new tech and services for farming sustainability solutions.