For centuries, Mongolia's semi-nomadic tribes have joined forces with semi-domesticated eagles to hunt small prey. But how much longer can this ancient food tradition survive? 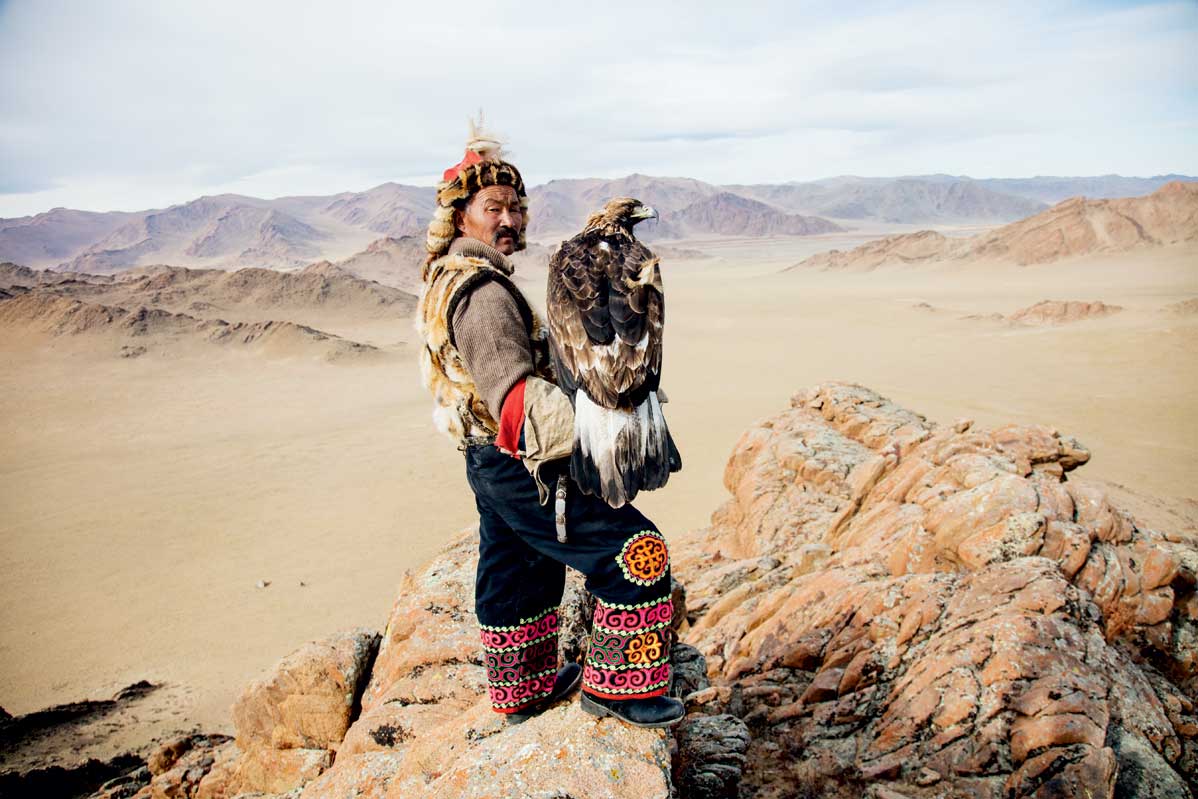 Humans have enlisted animals in the search for sustenance since the first mellow wolves stumbled upon our settlements thousands of years ago, then decided to stick around. And while some of these working relationships endure – horses still plow fields, pigs sniff out truffles, shepherds and pointers and hounds aid with herding or hunting – we now tend to prefer our pork on a plate and our pets on a leash. But in the rugged Altai Mountains of far-western Mongolia, a bond between man and bird defies total domestication. Amid this harsh, craggy landscape, hunters rely on golden eagles to find and kill rabbits, foxes, and other small game.

The hunters trap female eagles (whose eight-foot wingspans make them far more effective partners than the smaller males) before they reach breeding age, and build a rapport by rewarding requested tasks with food. Once a bird’s hunting career comes to an end – after a few years or a decade, depending on the raptor’s skill – she’s released back into the wild to find a mate and live out the rest of her days.

Even in this remote backcountry, however, the intimate interspecies partnership faces extinction due to increasing modernization. The Golden Eagle Festival, held in the city of Ulgii for the past 16 years, attempts to preserve Mongolia’s dying falconry traditions through a series of hunting competitions. Last fall, photographers Cedric Angeles and Brown W. Cannon III accompanied a group of Kazakhs as they traveled to Ulgii on horseback for the event, sleeping in yurts (called gers) along the 120-mile journey. “The connection the men have with the eagles is as significant as their relationships with people,” Cannon says. “Their worlds revolve around these birds.” 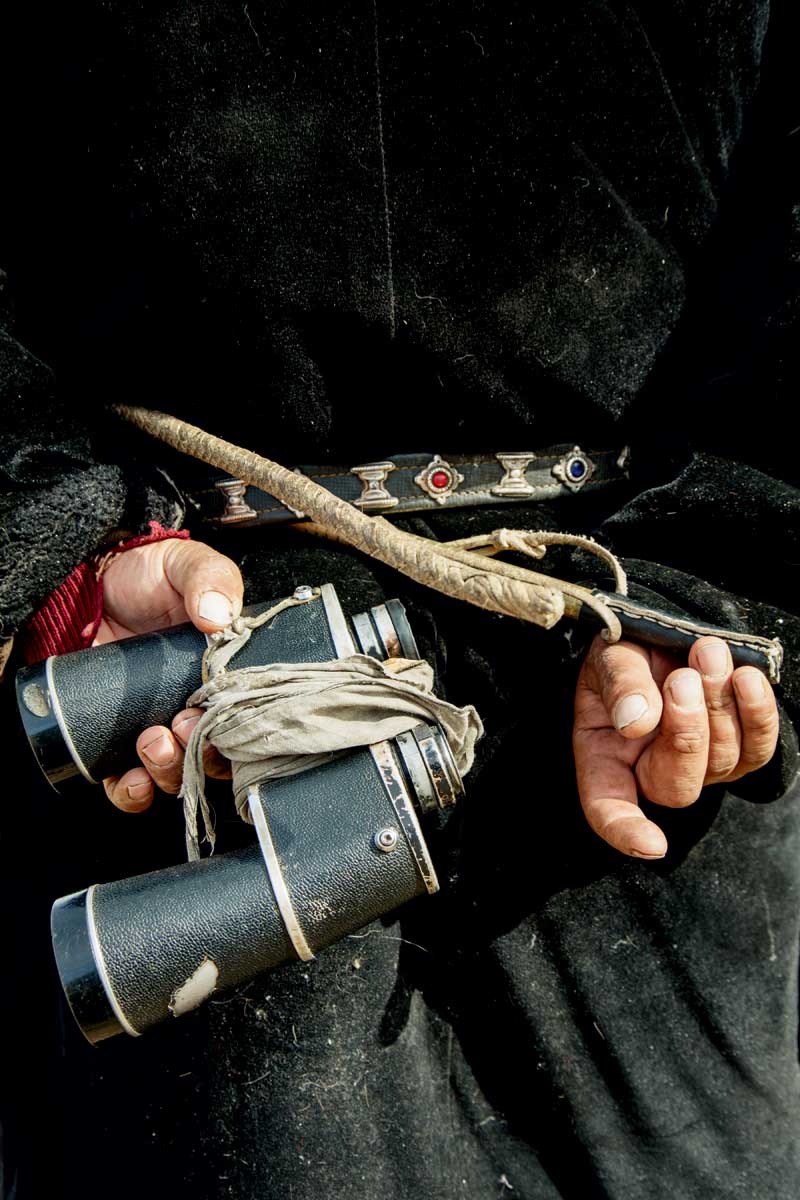 TOP: Dalaikhan Itale has been hunting alongside golden eagles in Mongolia’s Bayan-Ulgii province for 31 years. ABOVE: Human hunters, who lack “eagle-eyed” vision, require binoculars to spot prey in the distance. 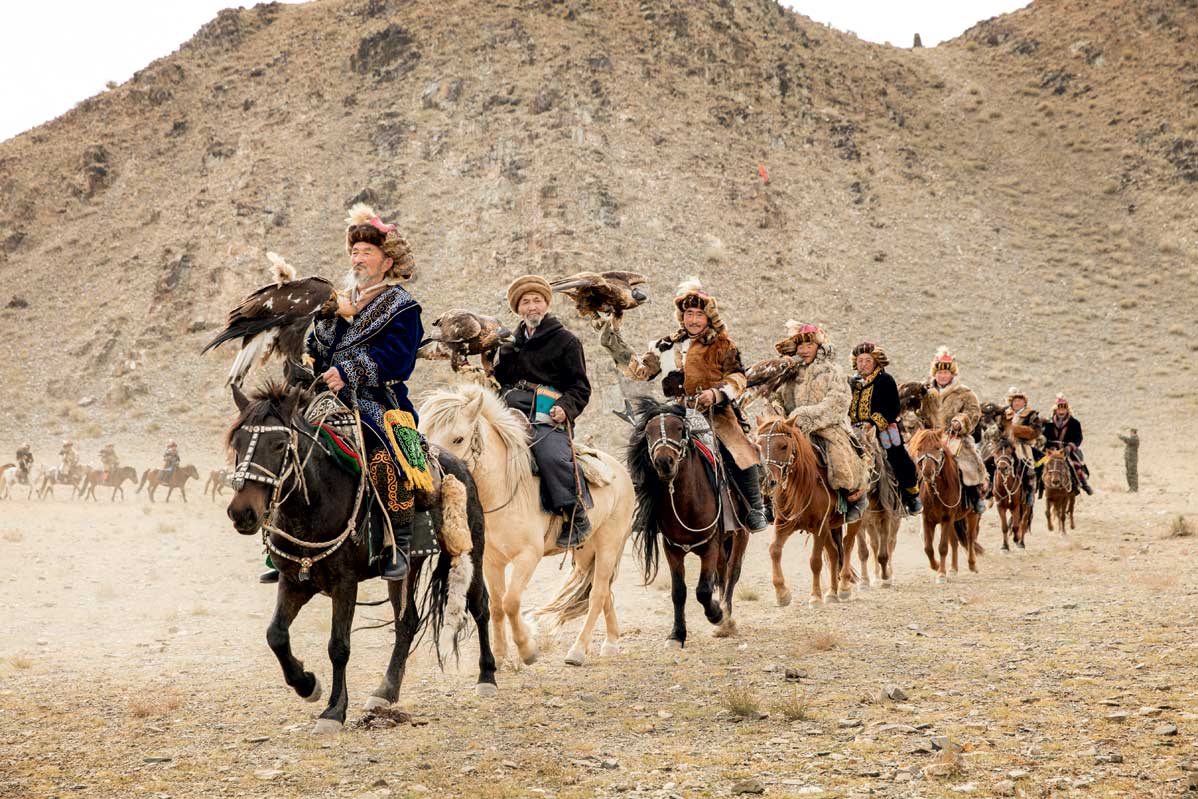 A group of Kazakhs from the Altai Mountains set off on the 120-mile trek to the Golden Eagle Festival in Ulgii, where the men and their birds will compete in tests of speed, agility, and accuracy. 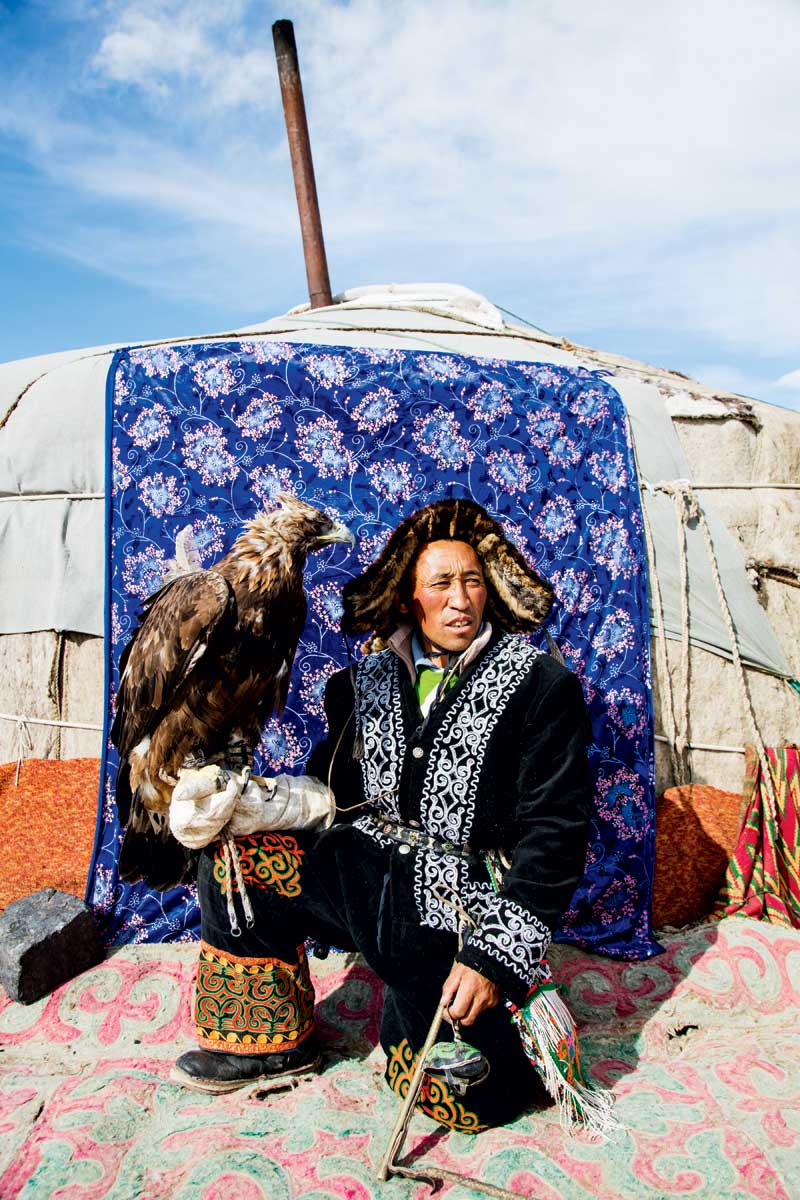 The terrain may be bleak, but the falconers’ clothing and yurts – including those of Jaidarkhan Jantekei – are quite the opposite. Many Kazakhs live semi-nomadically, moving their campsites according to the seasons and residing in permanent houses only as winter descends. 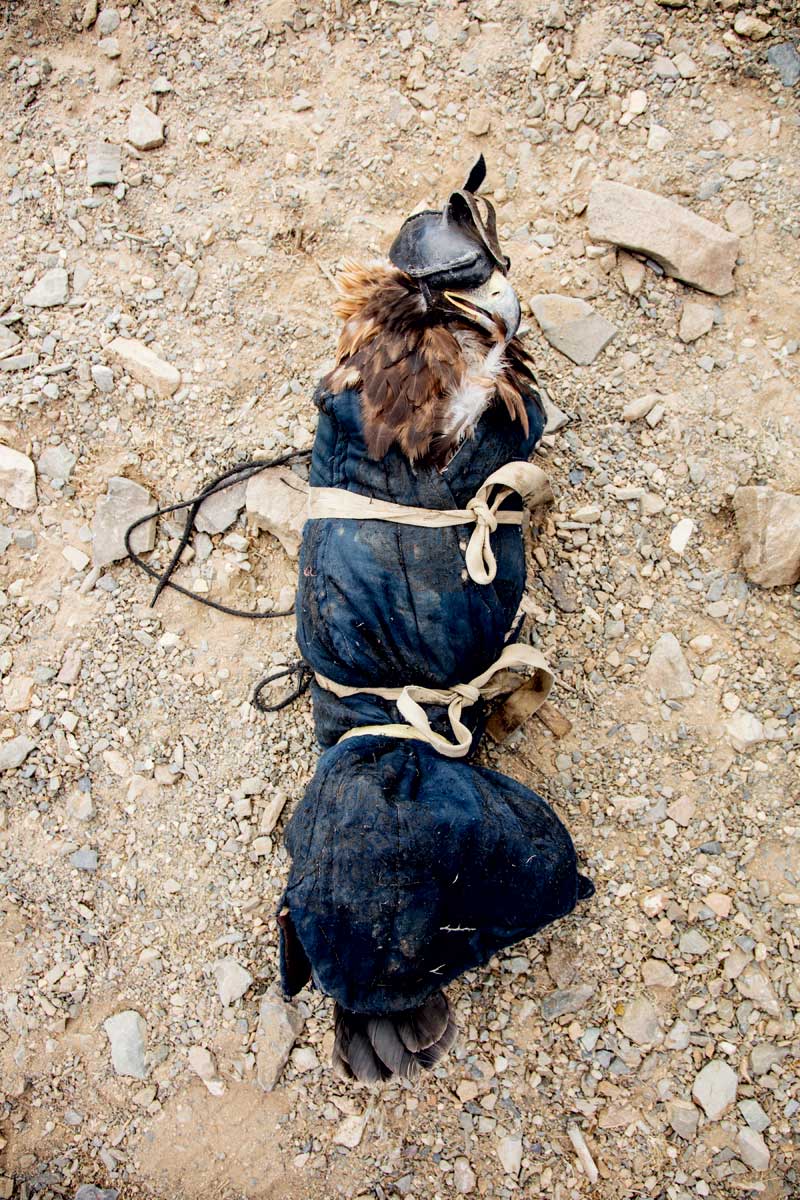 To keep their eagles calm during the long journey to Ulgii, the hunters swaddle the birds and cover their eyes with leather hoods. 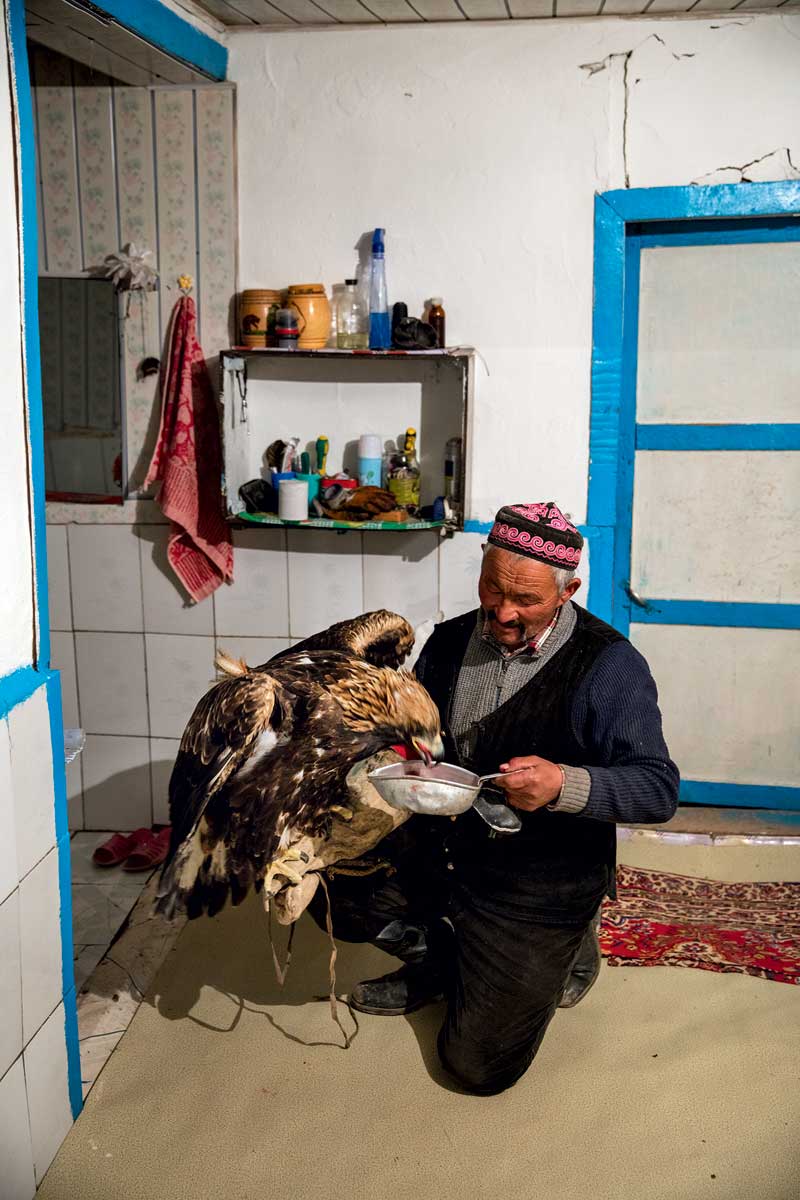 Itale’s companion would never intentionally hurt her master, but the eagle’s beak is razor sharp, so he serves her rabbit meat from a bowl. 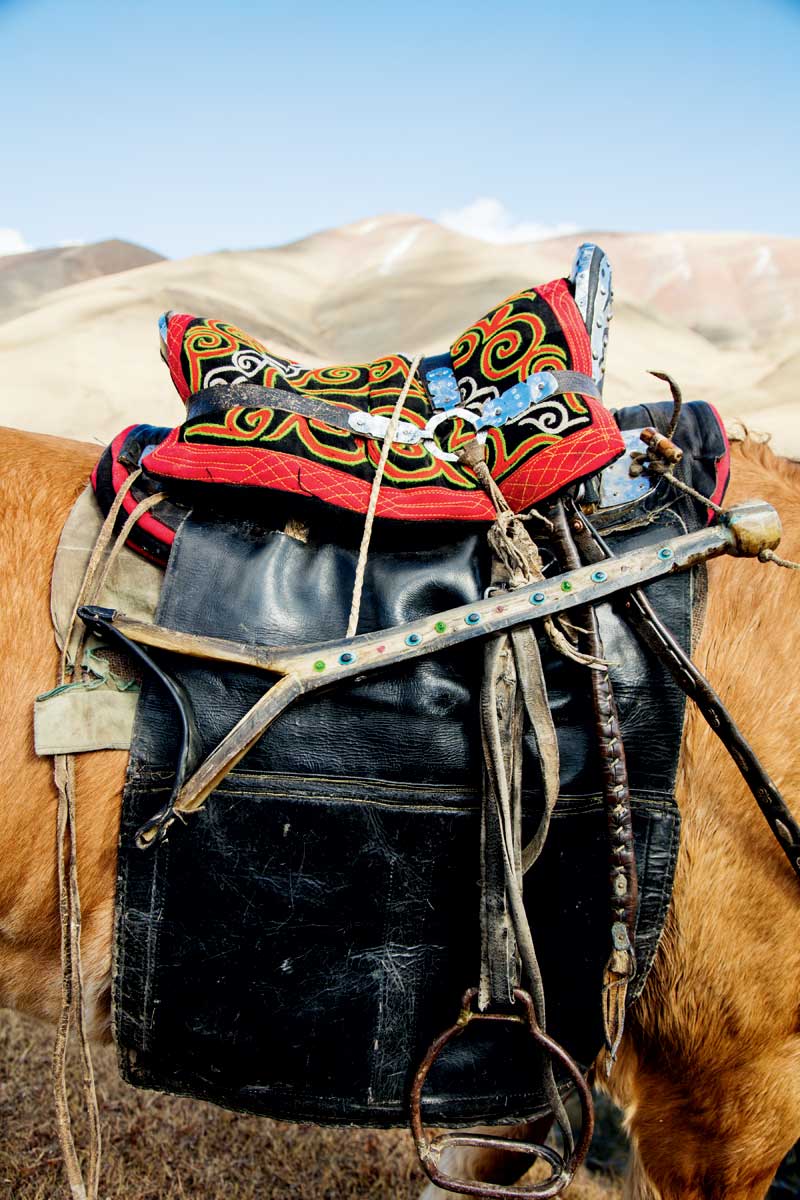 Mongolian hunters rely on baldaks – asthe wooden slingshot-like tool on this saddle is known – to support their arms when holding an eagle. 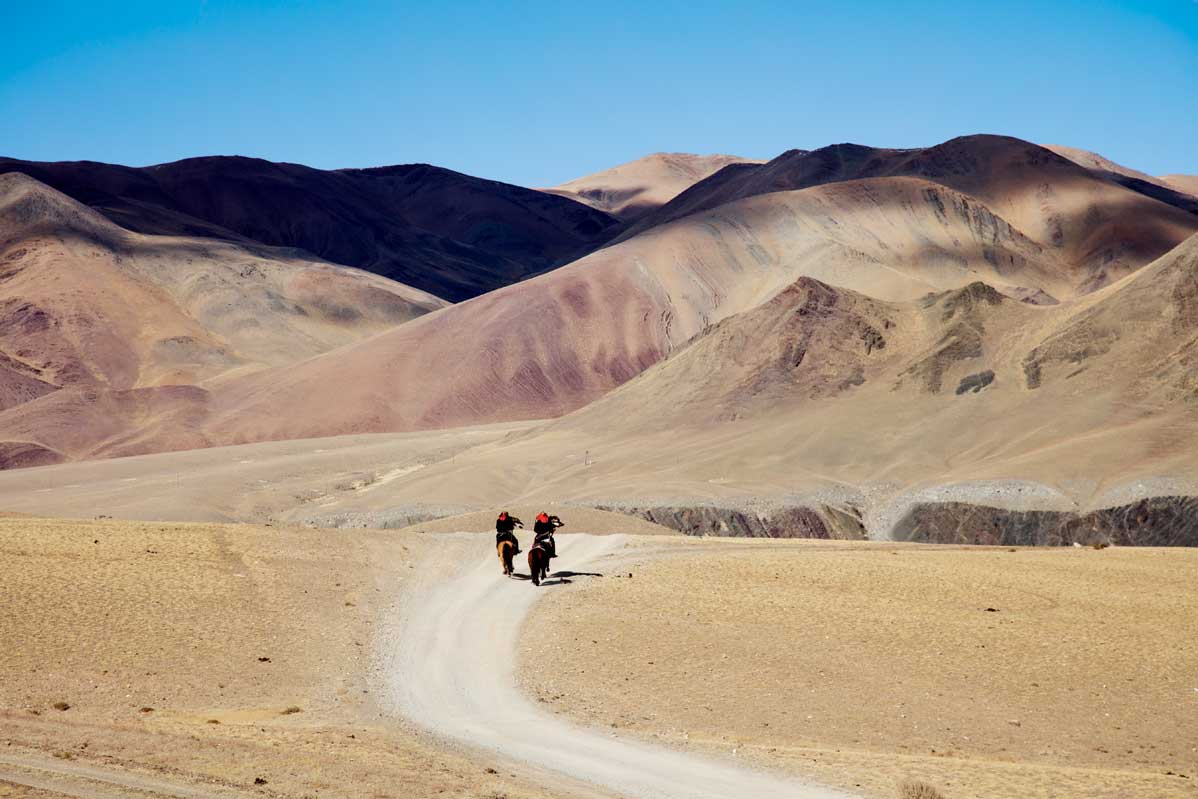 Askar Cheruch (left) and Itale are among the few hundred eagle hunters who still roam this arid landscape.