A vehement political statement made in poop. 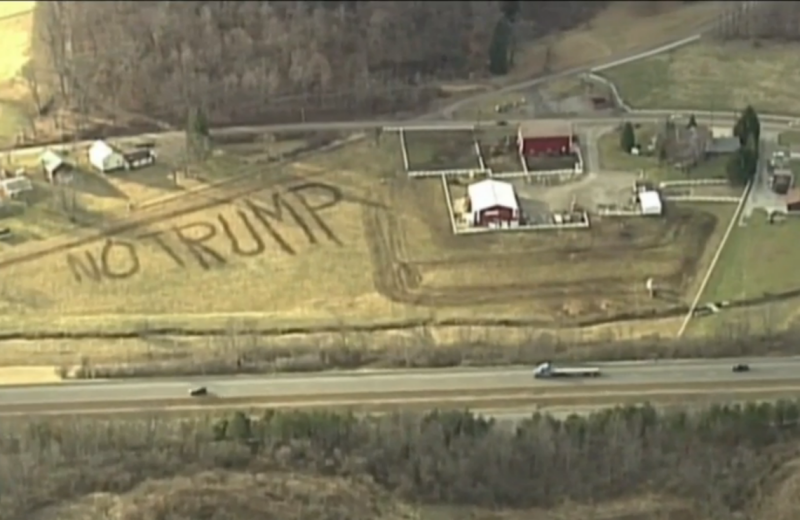 A Politico piece from last September spells out exactly why so many farmers refuse to vote for Trump: farming relies on labor, and a whopping 60 percent – estimated, at least – of the American farm workforce is made up of undocumented immigrants. Trump, in speaking to a Republican base that either is or that he assumes is anti-immigration, has repeatedly made sweeping, extremist statements about the immigration issues in this country. If he’s elected president, he said in July of last year, he will “greatly strengthen our border, making it impenetrable, putting a stop to illegal immigration once and for all. I will bring jobs back to the United States.”

He’s called for deporting all estimated 11 million undocumented immigrants – how he’d do that is still to be determined – which would, say farm advocates, cripple the agricultural industry. “We’ve got the land, we’ve got the water, and we’ve got the management. We’ve got everything in place but the labor,” said one Georgia blackberry farmer to Politico. “I can’t get American citizens to do the work. They just don’t want to do it.”

Knowing that, it perhaps makes a bit more sense that one Ohio farmer, Jerry Slankard, made his feelings known in the loudest way he knows how: with manure. Slankard used a manure spreader to write “NO TRUMP” in gigantic letters on his farm in Strasburg, just south of Canton.

The local ABC affiliate found that it took him about four hours to complete, and he used the poo from his 15 cows and bulls. “They furnished the ink for my writin’ out there,” Slankard told the station.