The Cornish Game Hen Is a Tiny Liar

The truth behind the decades-old trend of the Cornish game hen. 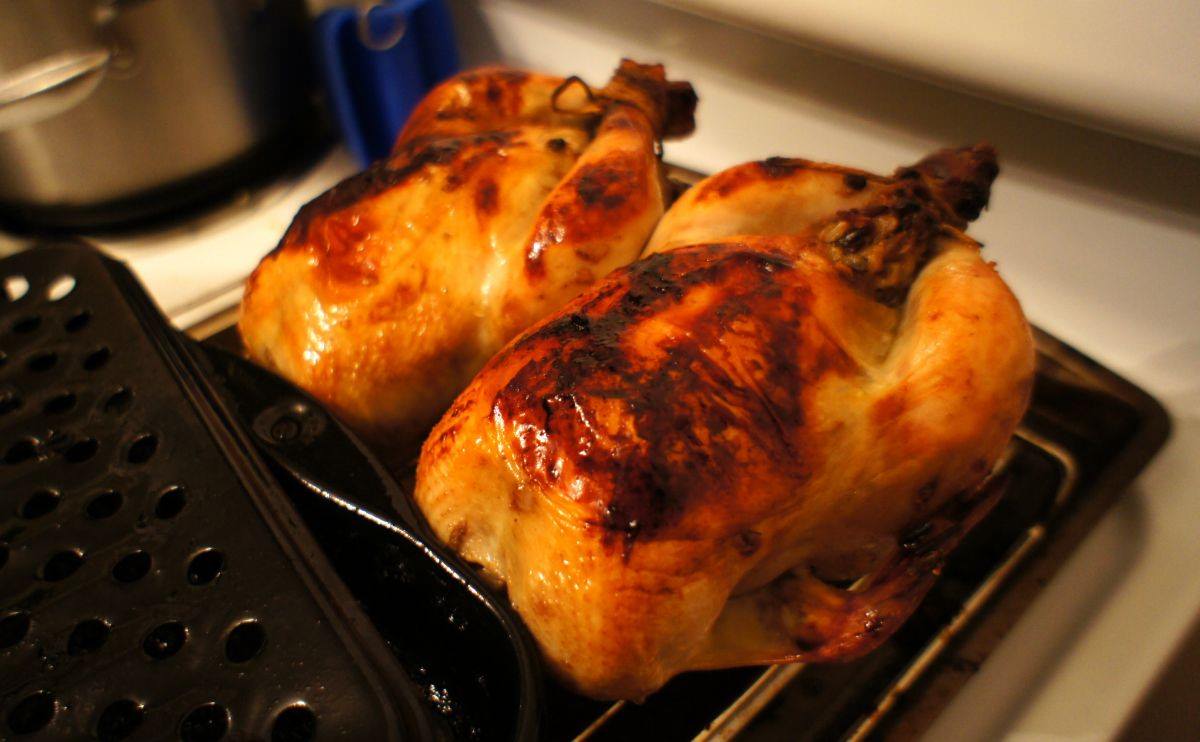 From the way the Cornish game hen is named and marketed, you might be forgiven for jumping to a few conclusions. You might see the word “game” and assume this is a game bird, like a pheasant or a guinea hen. This would be wrong. You might see the word “hen” and assume this is a female bird. This has a 50 percent chance of being wrong. In fact the only part of the bird’s name that isn’t a complete lie is the word “Cornish,” which is merely a partial lie. So what the hell is this thing?

The Cornish game hen was first bred, according to legend, by Tea Makowsky, who fled the Nazis and settled in Connecticut. (An SF Gate obituary provides some more biographical information about her.) After a fire destroyed her farm in 1949, Makowsky began cross-breeding chickens to try to come up with a bird that matures quickly, with a special eye towards the breast meat.

What she came up with was a combination of the Cornish chicken – at the time the most popular breed in the world for broiler (read: regular) chickens – as well as a couple of other breeds like the White Plymouth Rock hen and the Malayn fighting cock. (Sometimes a bird like this is called a “Rock Cornish game hen.”) These combinations gave her a chicken that grew gigantic breasts extremely quickly. In less than five weeks, the chicken was ready to be slaughtered, and, exotically, served one bird per diner. By the 1950s, the Cornish game hen was fabulously popular.

The Cornish game hen still commands a higher price per pound than regular broiler or fryer chickens, partly due no doubt to its decades-old reputation as an exotic new fowl.

It is not exotic or new. The Cornish game hen is a lie.

It is a small chicken.

Check your facts, there are still plenty of actual cornish chickens being farmed. You write an article for a “modern” audience who may think your assessment is accurate. Couldn’t be more wrong if you tried, look up the actual cornish game chicken…. it is not the hybrid lie of a chicken you suggest. I’ve raised and shown birds my whole life and currently raise actual cornish chickens. They are a far cry from your remarks. The actual betrayal is this article, not the chicken. Thank you.

Very odd article that proves someone that did all their research in a chair. I raise Cornish cross chickens, just processed a bunch at 12 weeks, they weighed from 8.8 lbs to 16.8 lbs. at 2-4 weeks they would be the proper size for cornish game hens. They are expensive because processing such tiny birds is not easy or cheap, you get all the expense of buying chicks, $2.80 to $4.00 each, putting them under a heat lamp for 100 degrees they need, and the special high protein food for starter rations at $19.95 a bag. Wrapped up in only… Read more »

“It is a small chicken.” The breed of chicken is not small, nor anything is does resemble small, I have a small farm with mix breeds of chickens and couple of turkeys, the cornish rooster i have, weighs more then my turkeys and at slaughter age which is 6 weeks or so pending, they weigh as much or a full adult leghorns. Also depending on the brand of cornish cross meat you buy, could determined if your eating a rooster or hen. You have mix information here and some are incorrect. Perhaps you should own a flock of these birds… Read more »

What is the opening called …in a Cornish hen that you stuff .. called ?

Related
Opinion, Technology
Opinion: The Rise of Precision Agriculture Exposes Our Food System to New...Austin C. Doctor and George Grispos
Animals, Plants, Water
These Tiny Crustaceans Are the Bees of the SeaShea Swenson
Books, Food & Drink
In Michael Twitty’s Kitchen, There’s Room to Be Your Whole SelfEmily Baron Cadloff
Animals, Environment, Plants
Farmers’ Battle Against, and Now For, MilkweedJennifer Taylor
wpDiscuz
We use cookies on our website to give you the most relevant experience by remembering your preferences and repeat visits. By clicking “Accept”, you consent to the use of ALL the cookies.
Cookie settings ACCEPT
Privacy & Cookies Policy