Leave it to a woman to revolutionize cattle ranching. Anya Fernald had a major beef with the meat industry, so she founded Belcampo, America's premier eco-conscious source for carnivores. 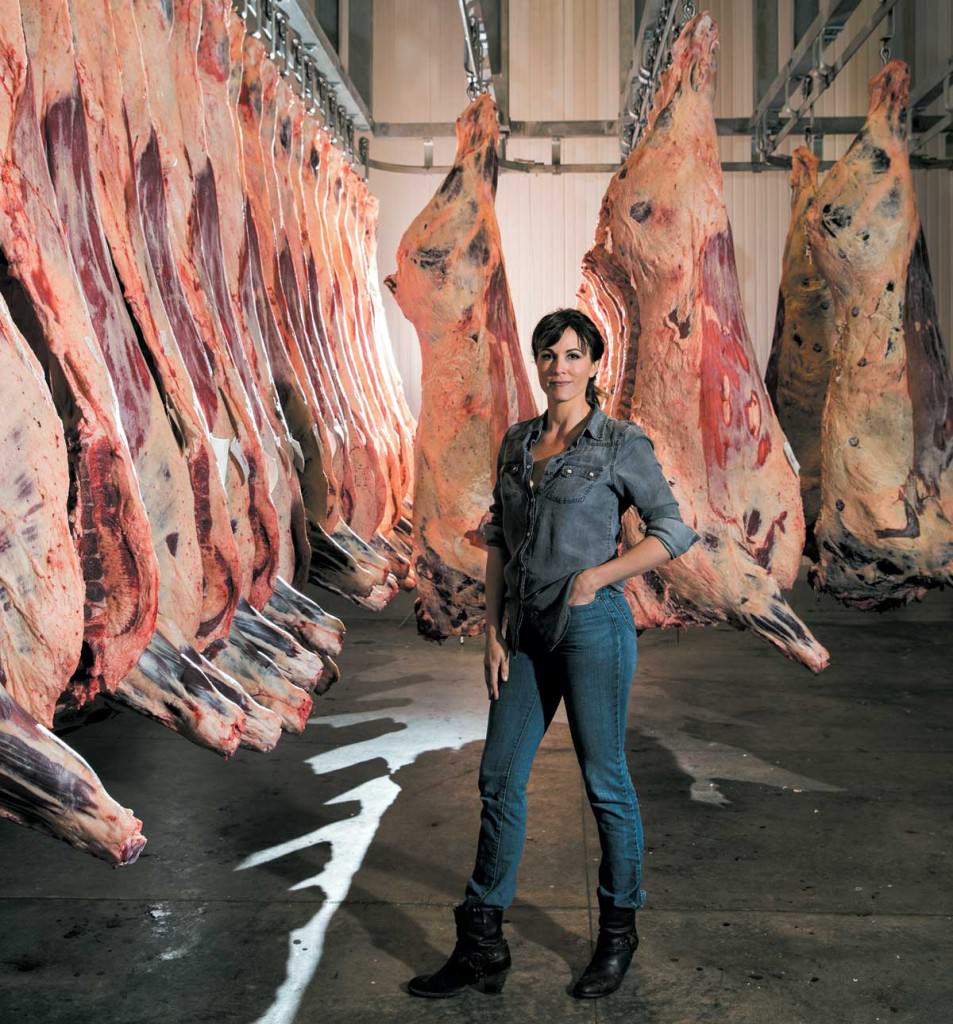 As a young girl in the early 1980s, Anya Fernald hit the Eugene, Oregon, farmers market every Saturday morning. Not to buy produce, or even hawk it. Instead, this enterprising second grader busked with her violin, collecting change from the growers, purveyors, and free spirits who strolled through the stalls. “You always want to think you’re your own creation,” she says. “But looking back, I realize that growing up in a hippie hotbed exposes you to a pretty radical way of thinking about food.”

Unconventional though Anya’s college professor parents may be – the family once lived above a cow shed in Bavaria, Germany – Anne and Russ Fernald weren’t exactly pleased when their youngest daughter graduated from Wesleyan University and announced plans to travel through northern Africa and southern Europe, interning at rural dairy farms along the way. “This was 1998,” Anya explains. “Farming wasn’t as celebrated as it is today.”

By the time she returned to the United States nearly a decade later – after stints at a Sicilian cheese research firm and Slow Food International in Piedmont, Italy – Anya had developed the palate of an Italian peasant, scarfing down butter and salami sandwiches. “My sister, a nutritionist at U.C. Berkeley, thought I was insane,” the 41-year-old recalls. One of her first stateside ventures involved distributing shares of a nose-to-tail cow CSA from the back of a rented van in San Francisco, amid an era of American panic about diets high in fat and protein. “The secret to surviving as an early adopter is being resistant to people who think you’re fucking up,” Anya says. “Now, my tastes seem mainstream. But on the leading edge, it was pretty lonely.” 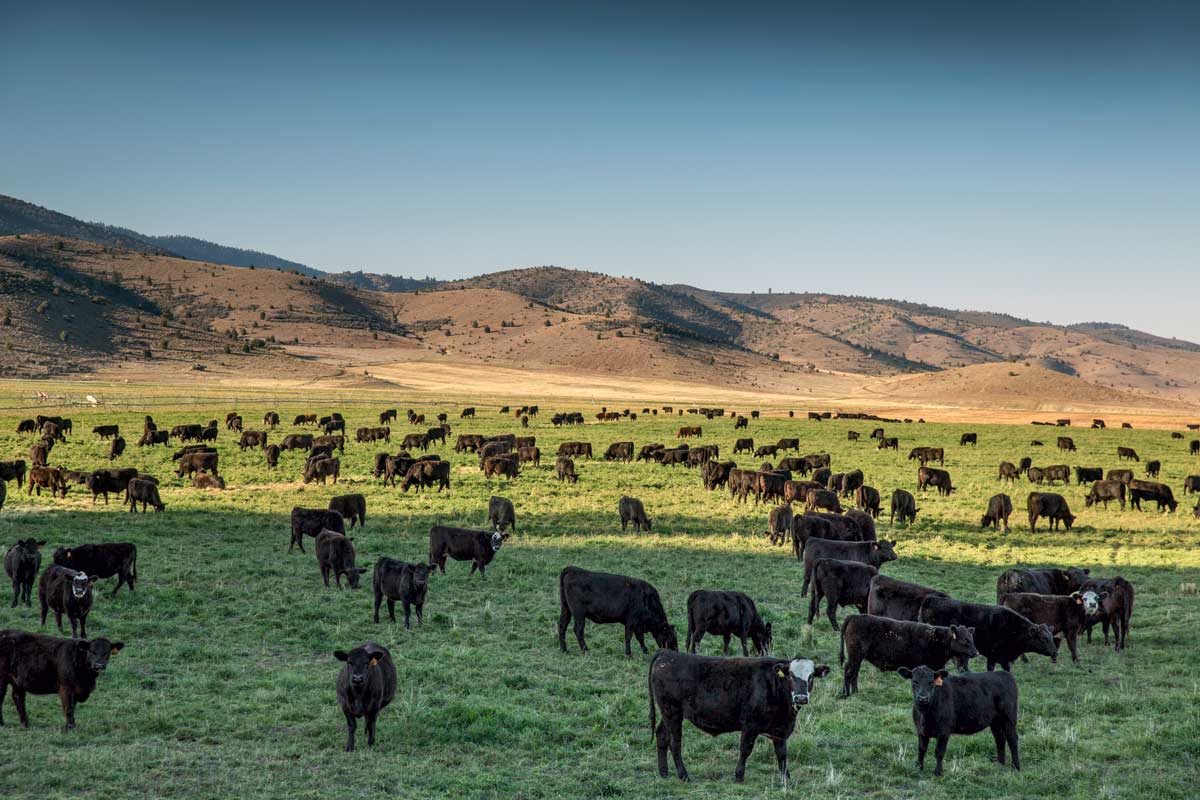 Angus, Hereford, and Wagyu yearlings graze on perennial pasture at the 18,000-acre ranch.

Guess who’s enjoying the last laugh? Anya Fernald’s California-based meat empire, Belcampo, is forecasting revenues of $20 million this year. The company got its start in 2012, thanks to a connection made through Alice Waters: Todd Robinson, a retired banker and passionate foodie, brought start-up capital, 6,000 acres in Northern California, and business acumen to bear on the conundrum of how to raise livestock in a manner that’s both sustain-able and profitable. “Other folks had figured out vegetables and dairy, but meat seemed to be the nut nobody could crack,” Anya says. “There are small ranches doing the right thing for the environment, but on a scale that involves the owner being a martyr.” The answer, she and Robinson found, lies in a large, vertically integrated operation. In addition to the ranch, which has since grown to 18,000 acres, Belcampo encompasses a humane slaughterhouse, six butcher shop”“restaurants, and a robust e-commerce operation. “By owning the whole supply chain, we’re able to capture the margin every step of the way,” Anya explains.

Belcampo’s 2,000-plus organic, grass-fed cattle – which graze alongside sheep, pigs, and chickens – live 28 months, instead of the usual 18. The firm slaughters 40 to 50 cows a day, compared with the 1,000 an industrial outfit might process in a single hour. “We go slow,” Anya admits, “but the resulting marbled, aged, dry-cured beef is epic.” Her customers agree, forking over $28.99 a pound for hanger steak that can run $12 at most grocery stores. 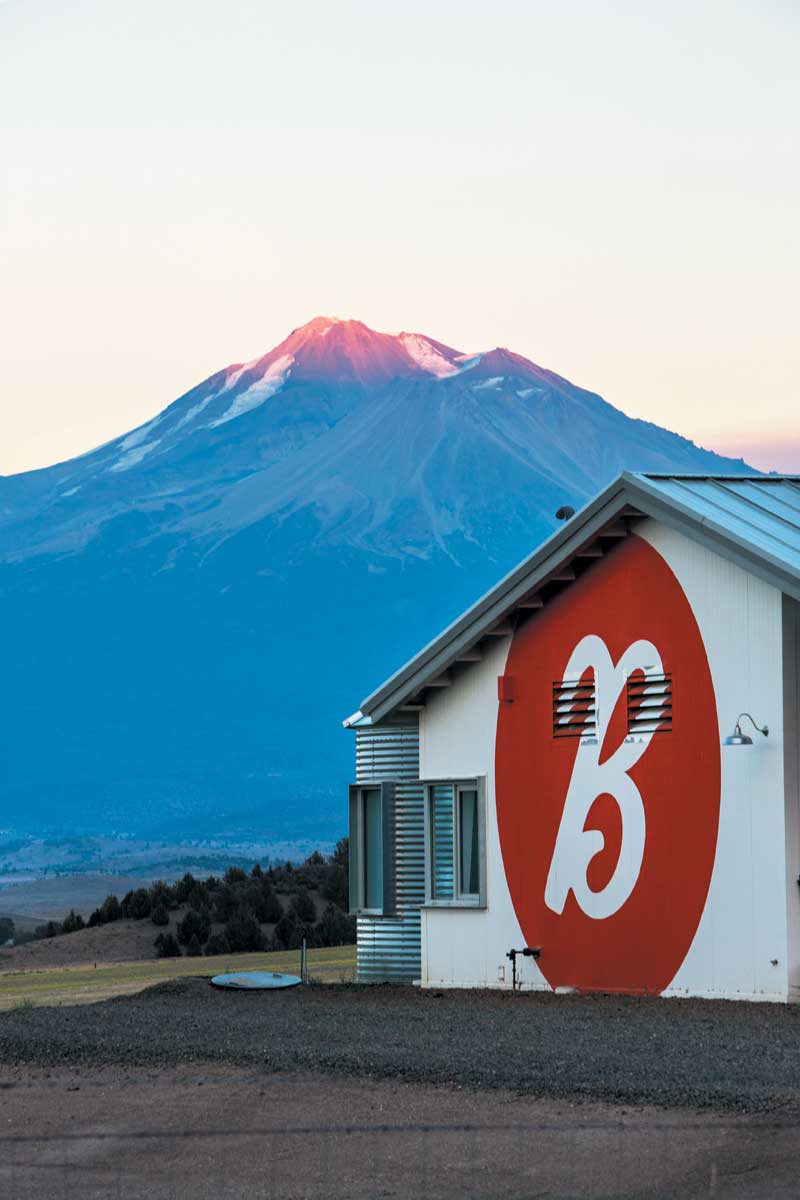 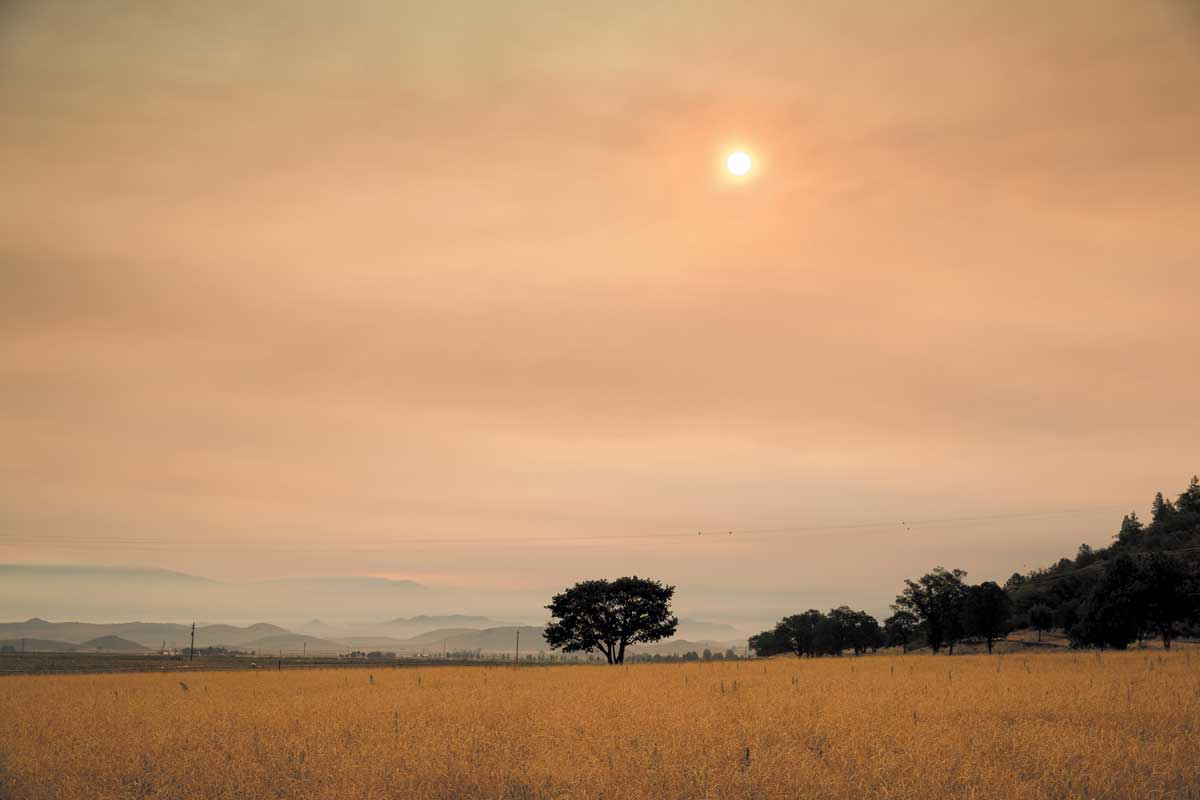 This photograph of a dry rangeland field at Belcampo – shot during the 2015 forest fires that came within 10 miles of the farm – illustrates one of many challenges California farmers face.

Surely, the inevitable offshoot of success – jealous resentment – ratchets up a notch or two in such a male-dominated industry. “There are many examples of strong women taking leader-ship in traditional family farming operations, but in slaughter and meat retail it’s very uncommon,” ays Anya, who refuses to let gender issues change the way she does business. “I’ve never been overly concerned about whether people like me or not.”

Still, there can be no doubt that Belcampo boasts a distinctly estrogen-friendly approach. Each summer, the company stages a ladies-only “meat camp,” aimed at empowering women to butcher and grill. And Anya encourages her employees to bring their families along on business trips to the farm, then treats them to laid-back dinners of grilled or skillet-seared steak, served with simple sides and sweets like tallow-fried potatoes and lard-laced pound cake.

This April, the entrepreneur will publish her first book, Home Cooked, just as she’s due to give birth to a second child. Her 3-year-old daughter, Viola, has already discerned the pleasure of a good bone. “She teethed on them,” Anya says. Viola also picks the fat out of mortadella and pops it in her mouth before devouring the meat. “You realize that babies know what’s what,” says America’s foremost female butcher. “We’re building this – not just the business, but the ideals behind it – as something we can pass down to our great-grandchildren.” Amen, sister. 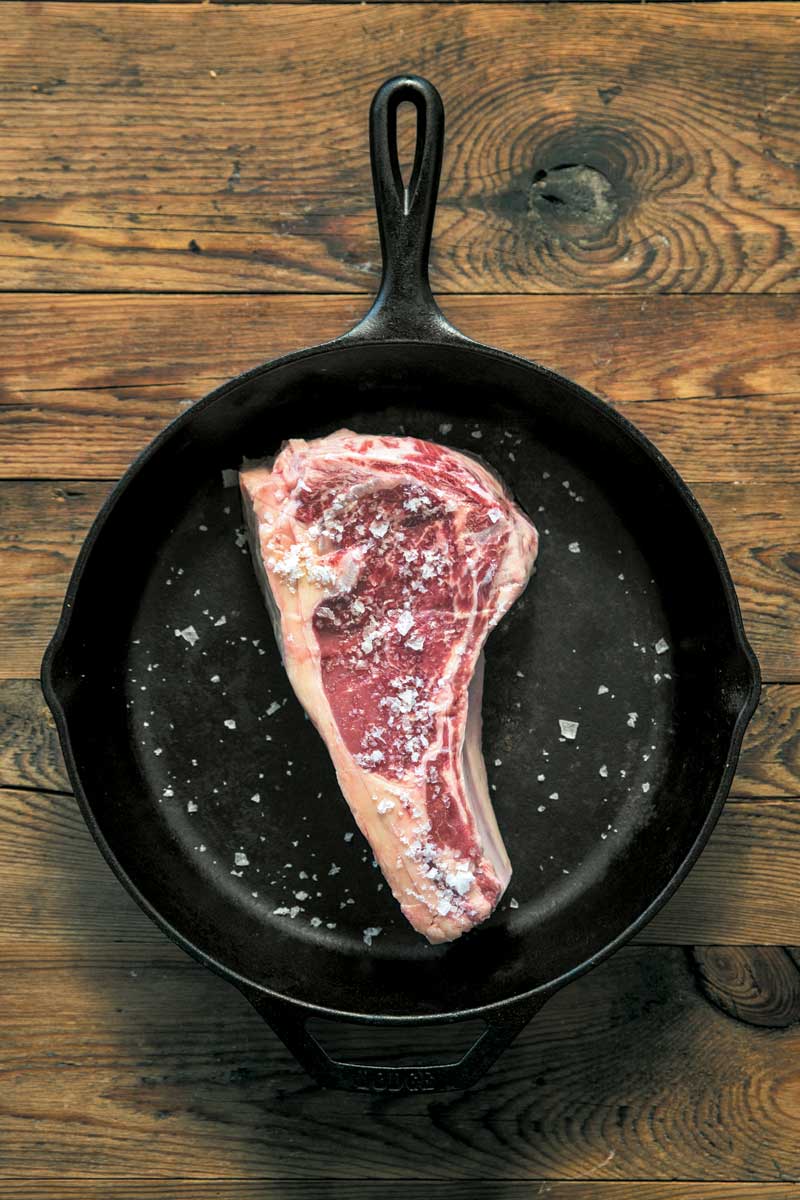 Grilling’s great, but for perfectly cooked steak in a flash, Fernald favors a “screaming-hot” cast-iron skillet. 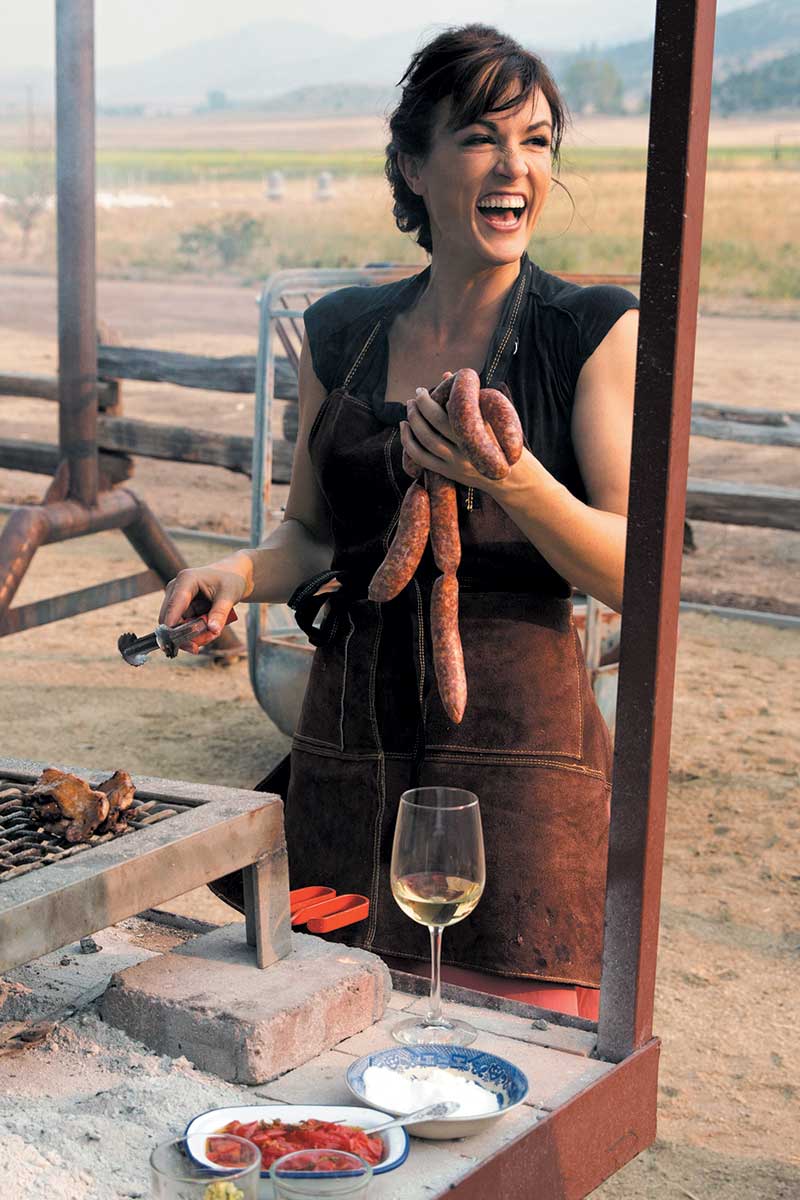 Fernald prepares to cook pork sausages (made from a cross among Berkshire, Duroc, and Ossabaw hogs) over the farm’s gaucho grill, a classic Argentinian wood-fire rig. 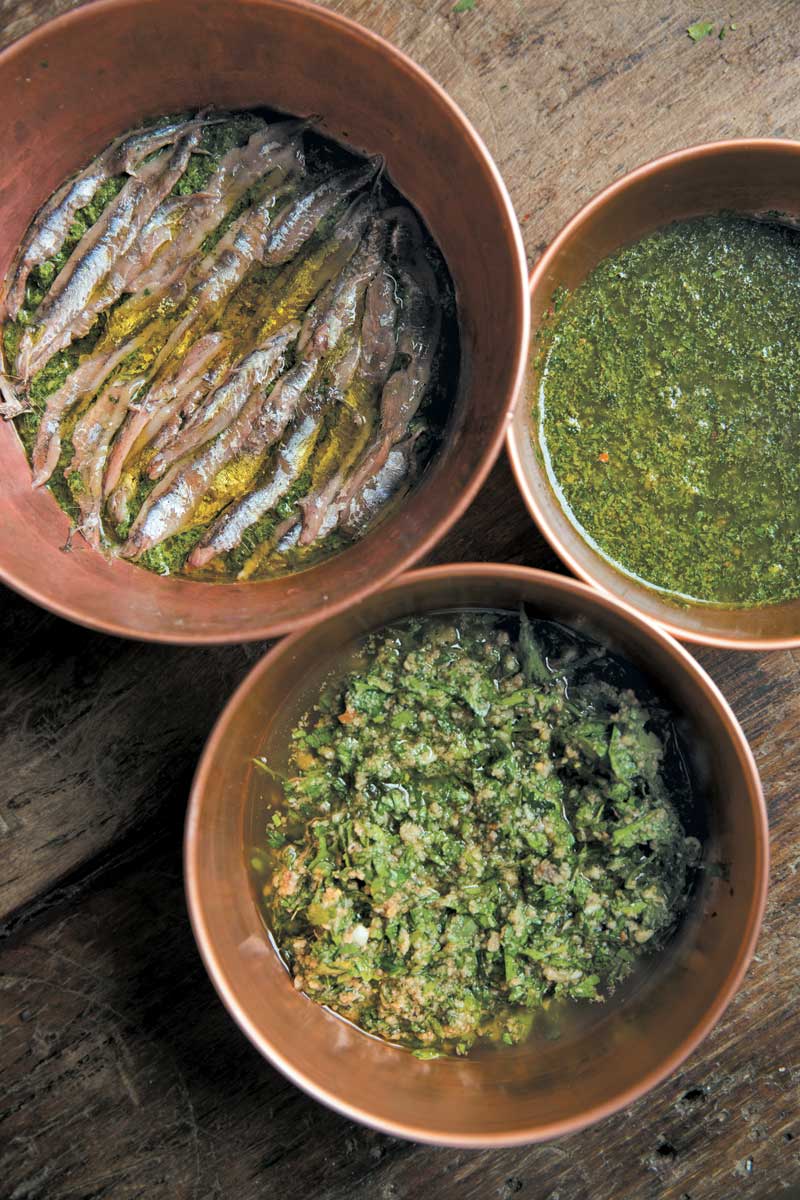 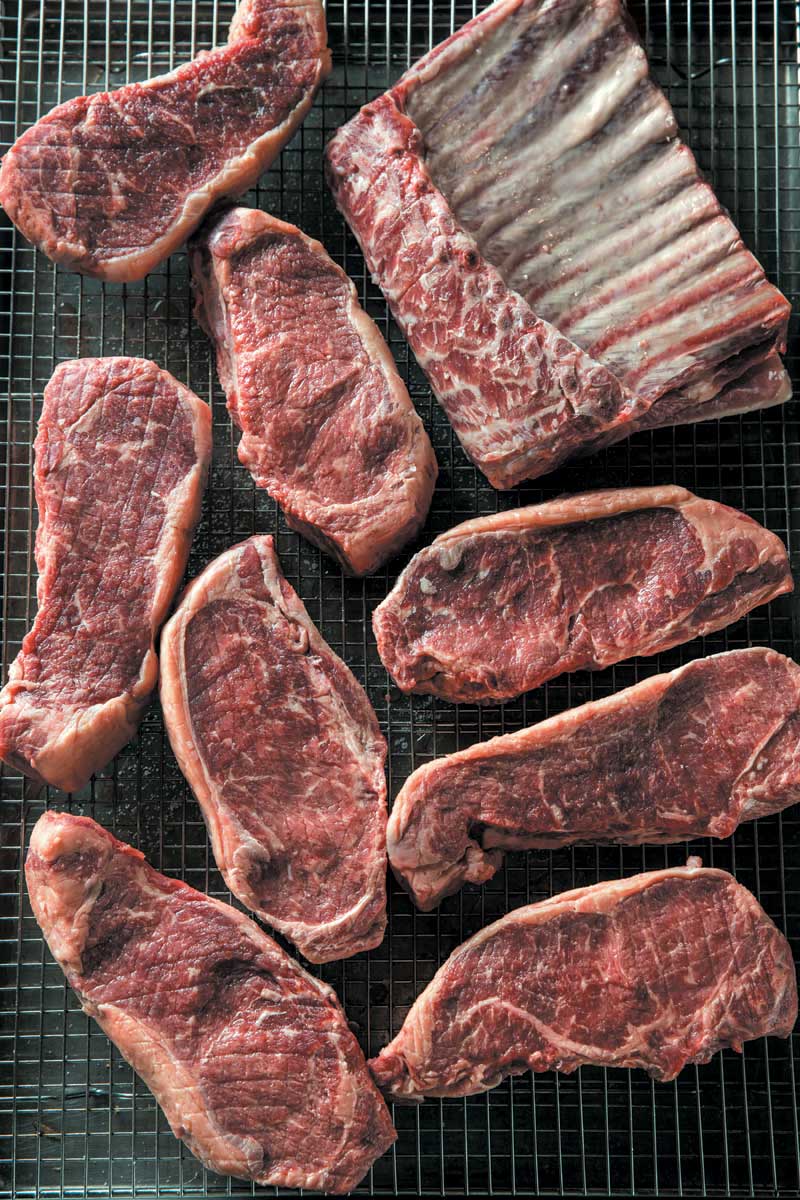 New York strip steaks and a rack of lamb await their time on the grill. 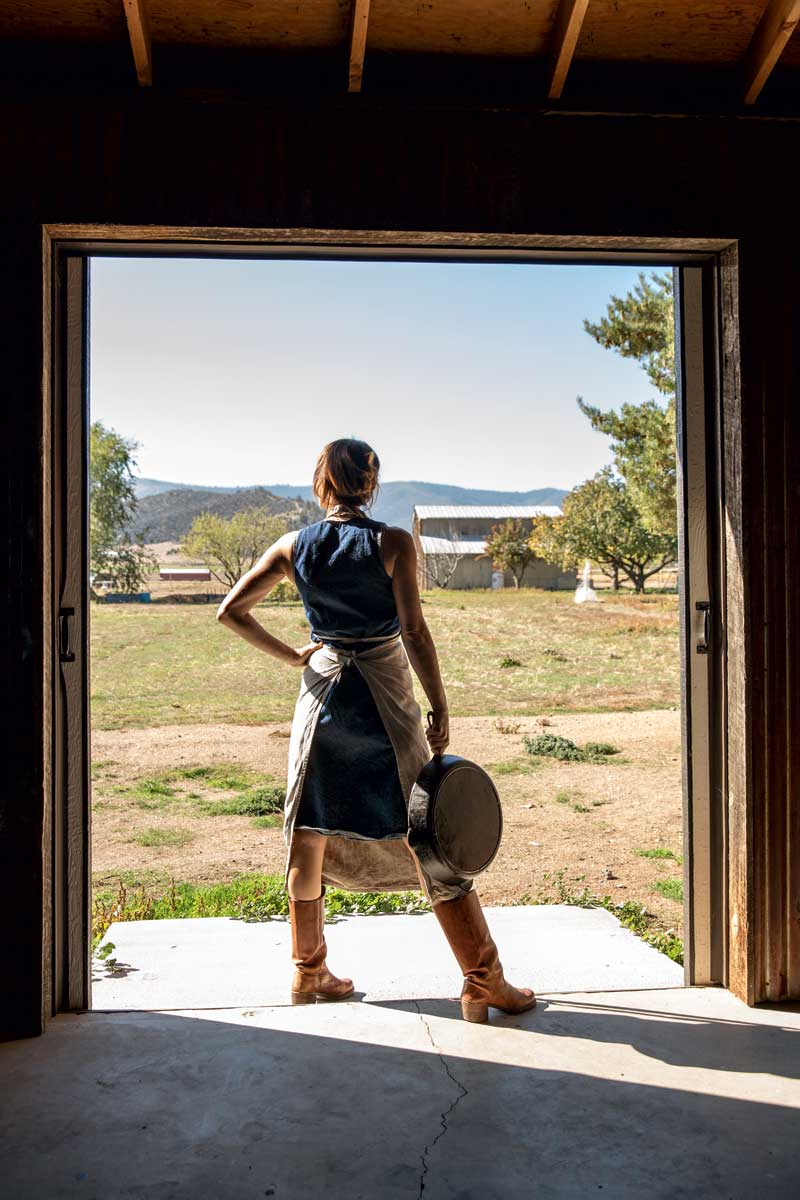 Fernald gazes at the field where the farm’s organic vegetables will be grown come summer. 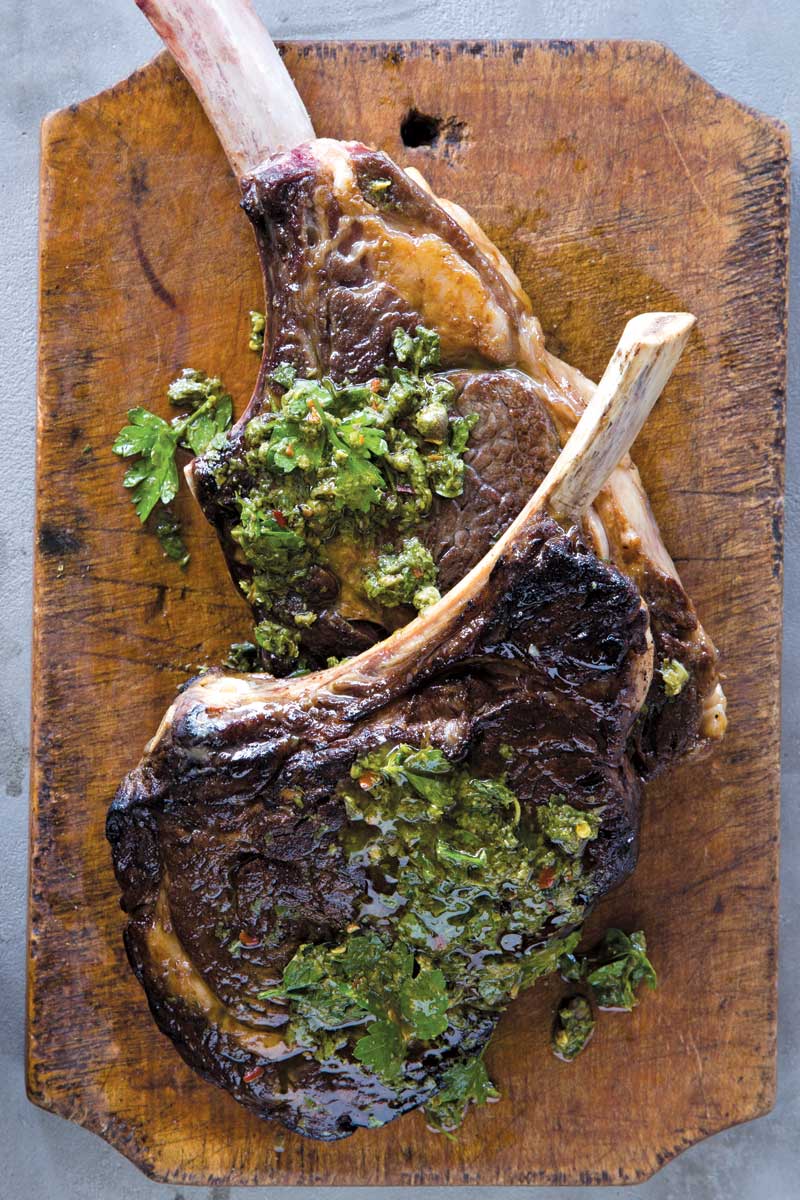 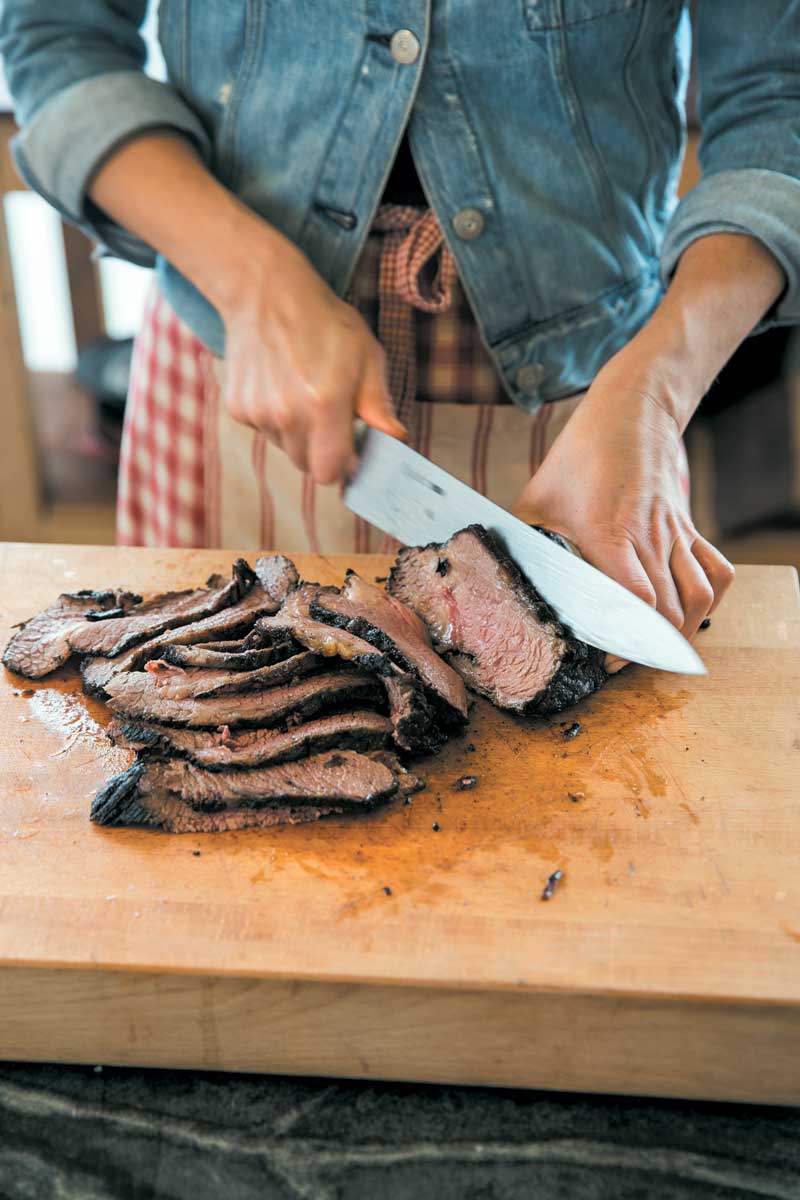 “I hate those briskets that are reduced to a pile of mush,” says Fernald, who sears the beef on her stovetop before transferring it to the oven, where the brisket braises in red wine until tender, yet still firm enough to slice. 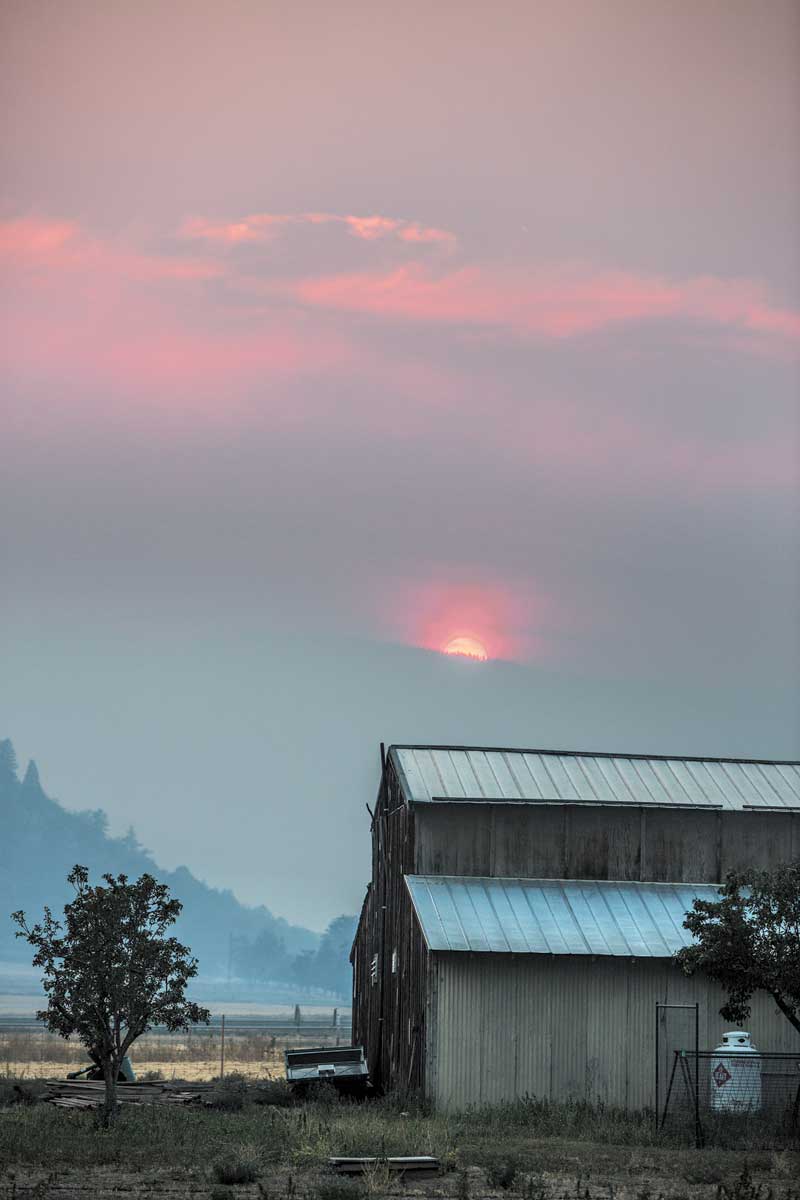 The sun sets over the ranch’s egg barn, where staffers incubate Pekin ducks. 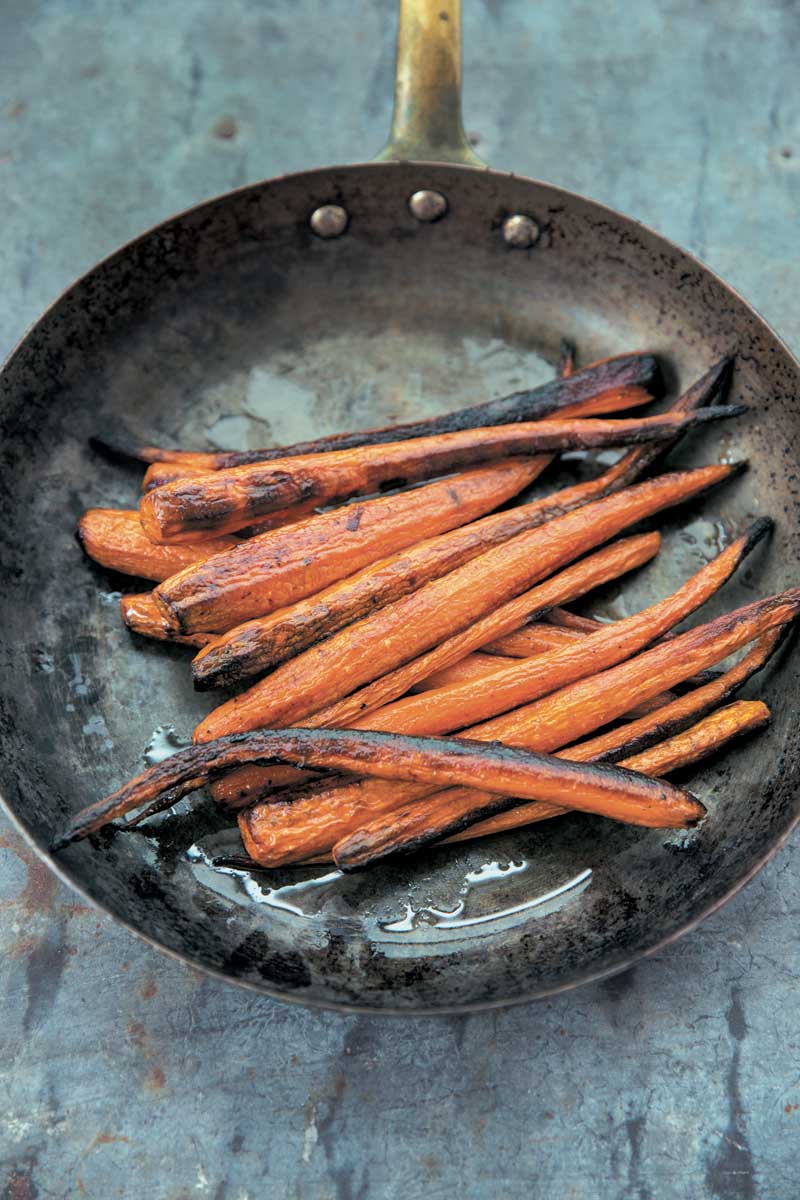 Even Fernald’s seemingly vegetarian sides benefit from a bit of butchering. These blackened carrots are roasted in lard, which adds life to “that miserable bag at the bottom of my refrigerator.” 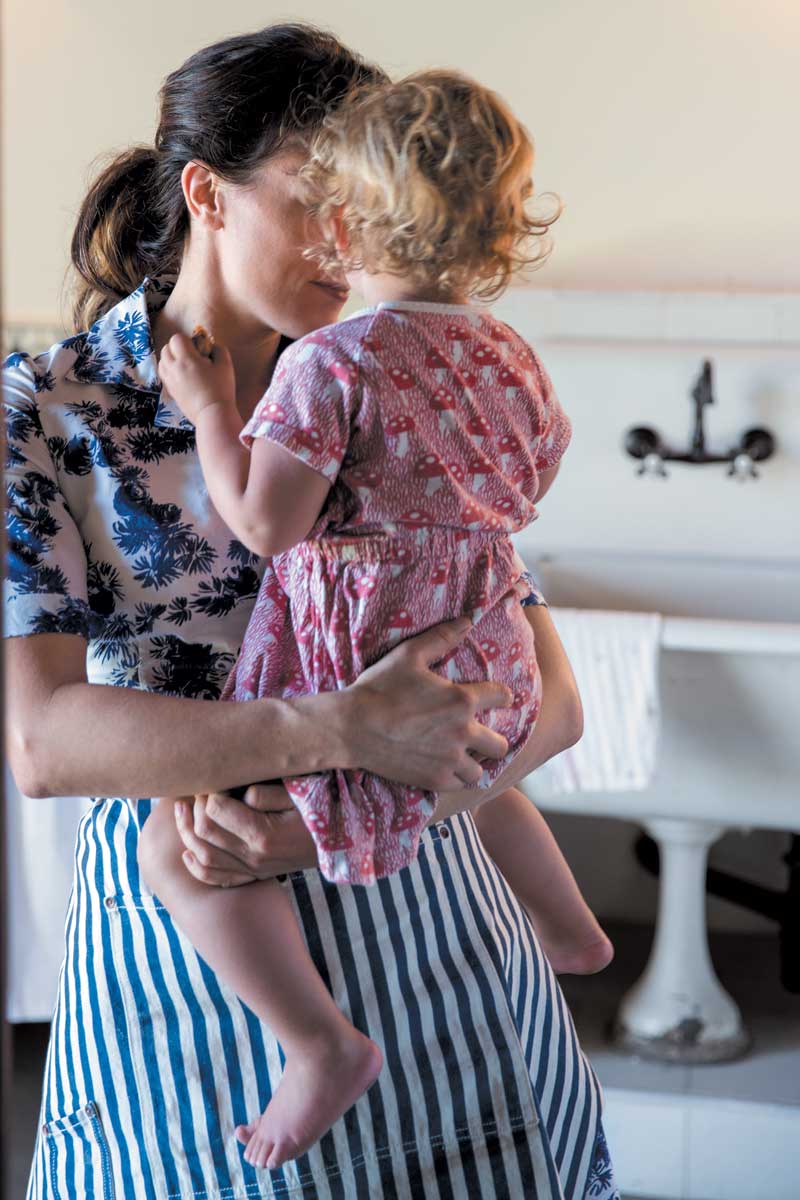 Fernald steals a moment with her 3-year-old daughter, Viola, in Belcampo’s farm kitchen.

Nobody comes to my house and says, ‘I couldn’t do that,’” Fernald explains of her no-fuss entertaining style. Case in point: These caramelized green beans cooked in 15 minutes. 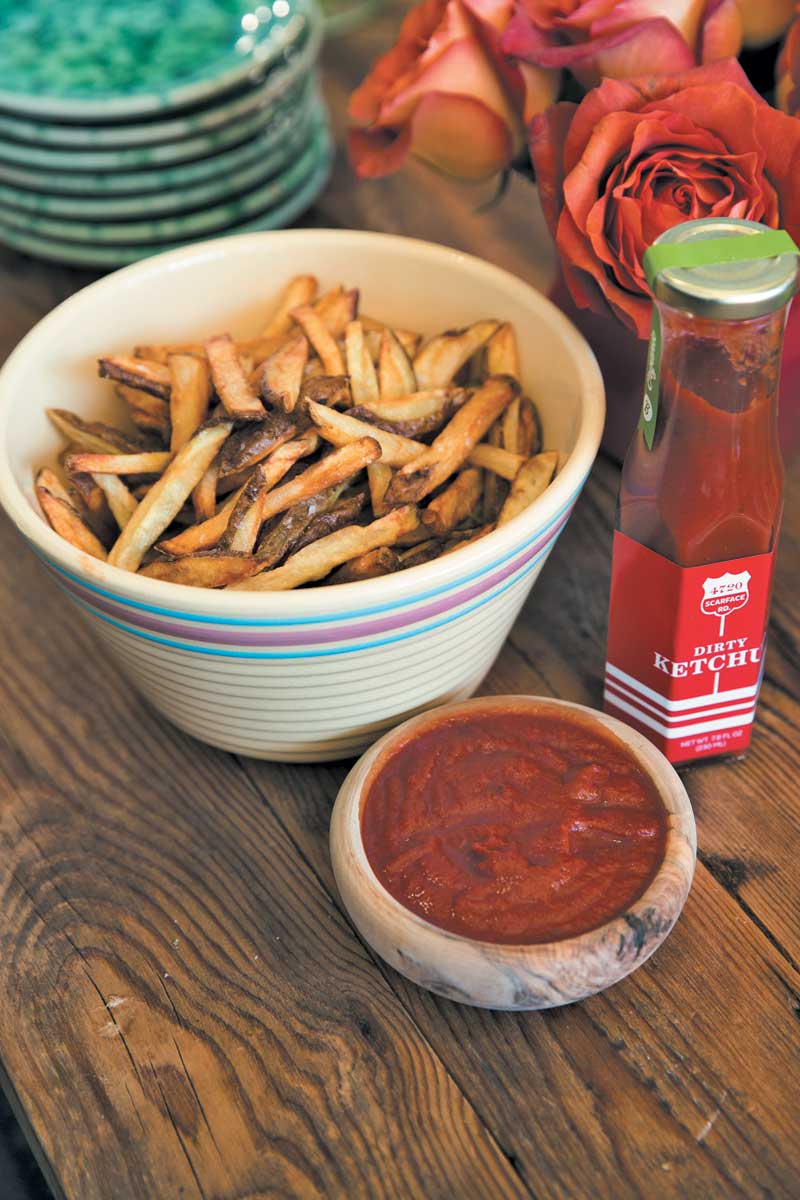 The cattle rancher ups the ante on “meat and potatoes” by double-frying russets in beef tallow. Though she won’t divulge the recipe for Belcampo’s signature Dirty Ketchup, you can order it online at belcampo.com. 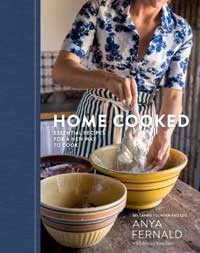