Fresh, Local, On-Demand, and Cheap: A Brazilian Recipe for Change

As the organic movement takes off, two Brazilian entrepreneurs concoct a CSA remix. 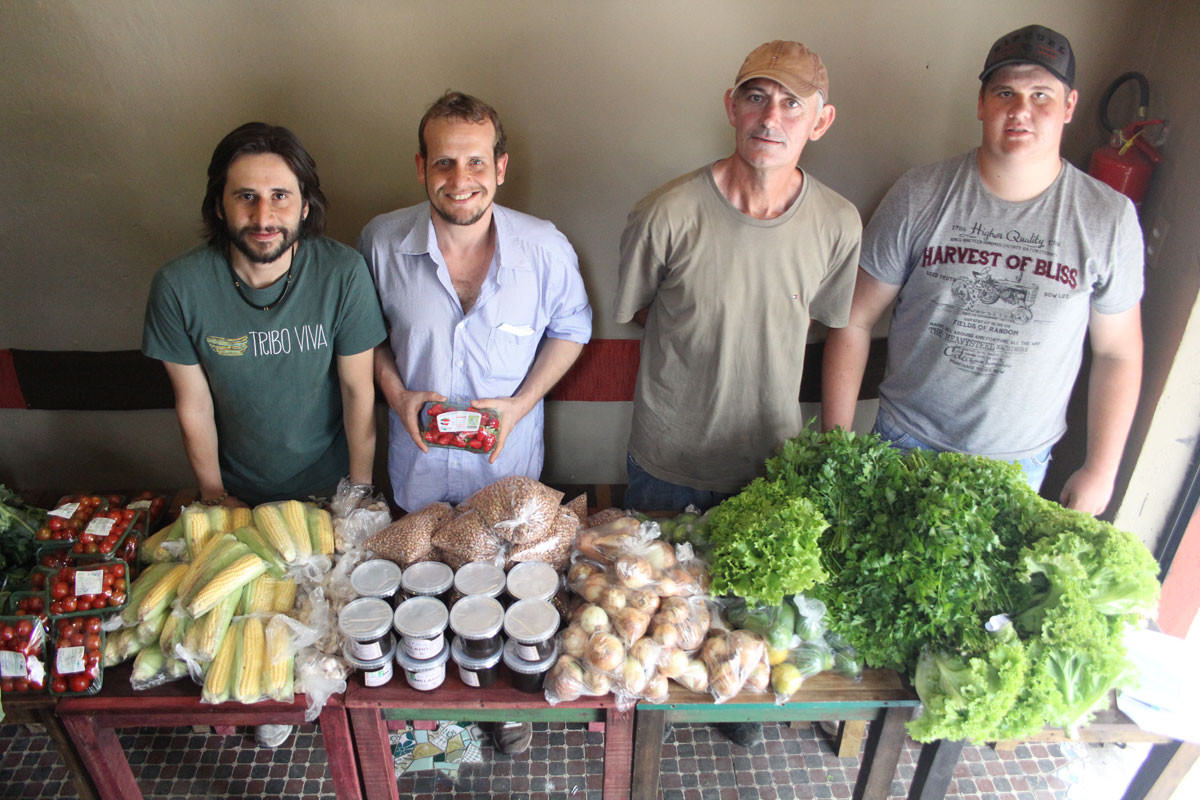 Sounds like good news. Sounds like extra good news after a long year of bad news in Brazil. With an economy sinking ever deeper into recession, political chaos, and social unrest, the public mood has taken a sour turn. Justifiable, yes, says Pietro Rocha, a chef and entrepreneur in the southern city of Porto Alegre. Effective? Not really.

“People here are getting more cynical by the moment,” Rocha says, nursing a caipirinha on a warm afternoon outside his small restaurant, Espontâneo. “[But] it doesn’t resolve anything.”

Tribo Viva has been in the works for some years. Driven by a sense that The System is generally failing people, society, and the environment, Rocha and a partner, Marcos Delgado, whose background is in web design and advertising, began brainstorming around their passion for organic food after meeting about five years ago. Drawing inspiration from sharing economy startups like Airbnb, Kickstarter, and a Brazilian analogue, Catarse; the familiar CSA model; and web-savvier food initiatives like Australia’s Open Food Network, the pair went live with Tribo Viva this past July.

Rocha and Delgado bill their startup (Tribo Viva means “living tribe” in Portuguese) as a “collaborative consumption network.” The basic premise is simple: It’s a website that connects consumers in Porto Alegre with organic farmers in the region. The pair emphasize accessibility over profit and – by cutting out the distributors and retailers in the Brazilian food supply chain – are able to offer local, organic food far cheaper than it can be had in the grocery store. In many cases, it’s even cheaper than conventional produce in the grocery store. For example, Tribo Viva sells strawberries for 15 Brazilian reals (BRL) per kilogram, which is $1.70 in US dollars; at the grocery store, they go for twice that: 30 BRL.

That’s a win for Brazilians’ increasingly stretched pocketbooks, as well as human and environmental health in a country that’s recently become the world’s leading user of pesticides and herbicides – some of which are banned in the U.S. and Europe.

Like a CSA, Tribo Viva’s basic unit of sale is the batch: assortments of organic-certified vegetables, herbs, fruits, and juices that vary by season, availability, and supplier. Unlike the typical CSA, though, batches are available on demand. 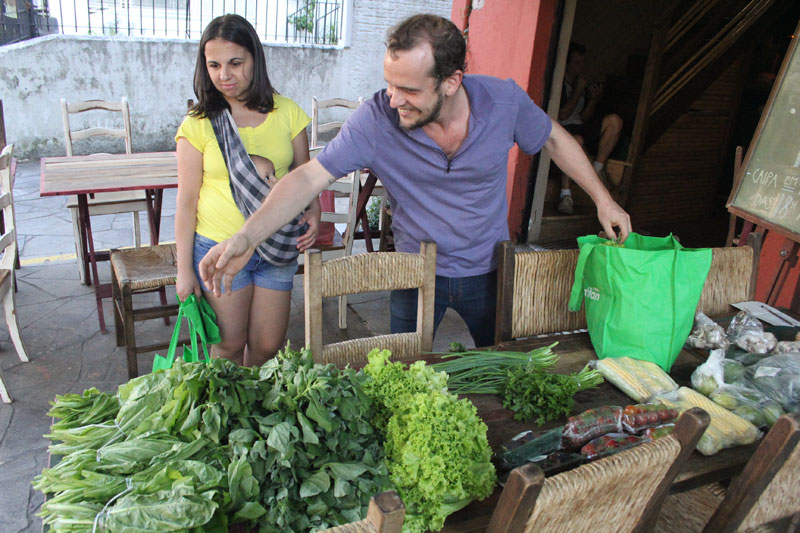 Pietro Rocha fills bags for a customer picking up her order at Rocha’s restaurant, which occasionally doubles as a pickup site.

Customers (for the record, as an American expat living in Porto Alegre, I am one) order and pay ahead of time through the website. Sales close about two days before the pickup, allowing suppliers time to harvest, prep and deliver. Pickup happens at set times at apartments or businesses scattered throughout the city, hosted by Tribo Viva’s network of “delivery coordinators,” who get a free batch in exchange for their work. There are now 15 coordinators, and a long waiting list ready to step up as the network (now at about 1,200 customers who have made at least one purchase) grows. All in all, it works sort of like a virtual farmers market/CSA mash-up, and as far as Rocha and Delgado have been able to find, there’s nothing else that works quite like it in the world.

At the moment, Tribo Viva sells food from eight farms or farmer cooperatives near Porto Alegre. Farmers decide what to include in a given batch and set the prices that Tribo Viva charges (the company supports itself with a small fee tacked onto each batch purchase). From a farmer’s perspective, Tribo Viva is advantageous over a traditional farmers market since everything they bring to town is already sold, and they don’t have to spend all day manning a booth. 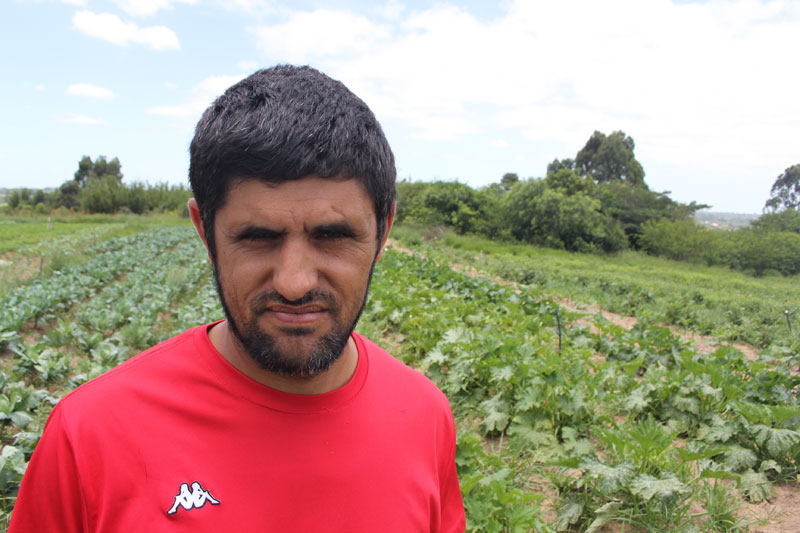 Osmar José Bedende has supplied organic produce through Tribo Viva since it launched about six months ago.

“It’s been great for us. It’s excellent,” says Osmar José Bedende, who mostly grows vegetables on his farm in ViamÁ£o, about 30 miles east of Porto Alegre. Bedende now makes two weekly deliveries to the city, accounting for 10 to 20 percent of his total sales.

Despite receiving plenty of local press, Tribo Viva remains very small. Total weekly sales fluctuate, but averaged around 100 batches per week toward the end of 2015. At the same time, the organic movement is having a moment in Porto Alegre – much like what has occurred over the past decade or so in the U.S.. The Folha de Sao Paulo reports a 30 percent growth in sales of organic foods in 2014; 2015 is projected to see another 25 percent on top of that, landing at $2.5 billion in total sales.

“There’s been absurd growth,” says Fernanda Scur, a Tribo Viva delivery coordinator who’s been active in the organic scene here since the late ’90s. Case in point: In December, the huge distribution warehouse that supplies produce to much of Porto Alegre began carrying organic food.

Scur says Tribo Viva is one of a group of like-minded food ventures that are popping up around the country, as people increasingly “search for a solution that we can’t find in the current system … It’s all happening locally, through these small initiatives like Tribo Viva.”

Momentum behind organics alone, though, doesn’t guarantee that an idea like Tribo Viva has staying power, and Delgado and Rocha are hard at work ironing out the kinks that inevitably arise when you’re dealing with so many moving parts.

“It’s very tough to develop the network and the logistics,” says Rocha, still pulling at his caipirinha.

They’ve made believers of themselves, though. They’re convinced they’ve got something innovative; they expect things to grow; they’re confident the model can change things. They believe it could replicate anywhere, and they’re eager to branch out beyond Porto Alegre. In Rocha’s dreams, Tribo Viva someday becomes the Airbnb of organic food – not just a fledgling Airbnb-inspired purveyor of organic food, little-known even in the second-tier Brazilian city where it was founded.

Popular
The Fertilizer Shortage Will Persist in 2023Shea Swenson
7 Smokable Plants You Can Grow That Aren’t MarijuanaBrian Barth
Agricultural Runoff Pollutes Well Water, a ‘Public Health Crisis In the Making’Madison McVan, Investigate Midwest
Move Over, Mezcal. A Sustainable Tequila Alternative Is Taking Over.Hollie Stephens
Why Don’t We Eat Turkey Eggs?Dan Nosowitz
Explore Modern Farmer
Related
Features, Food Security, Labor
The Rise of Virtual Farmers MarketsLeah Borts-Kuperman
Features, Food & Drink, Fungi
Could New York Become the Mushroom State?Sara Foss
Environment, Labor, Water
California Farms and Farmworkers Attempt to Recover From Record FloodsNaoki Nitta
Food Security, Labor, news
A New Egg Co-operative Has Hatched in the Western U.S.Lindsay Campbell
wpDiscuz
We use cookies on our website to give you the most relevant experience by remembering your preferences and repeat visits. By clicking “Accept”, you consent to the use of ALL the cookies.
Cookie settings ACCEPT
Privacy & Cookies Policy