What’s The Point Of Milk That Comes In Plastic Bags?

One school in Nebraska is trying to find out what Canadians love so much about bagged milk. 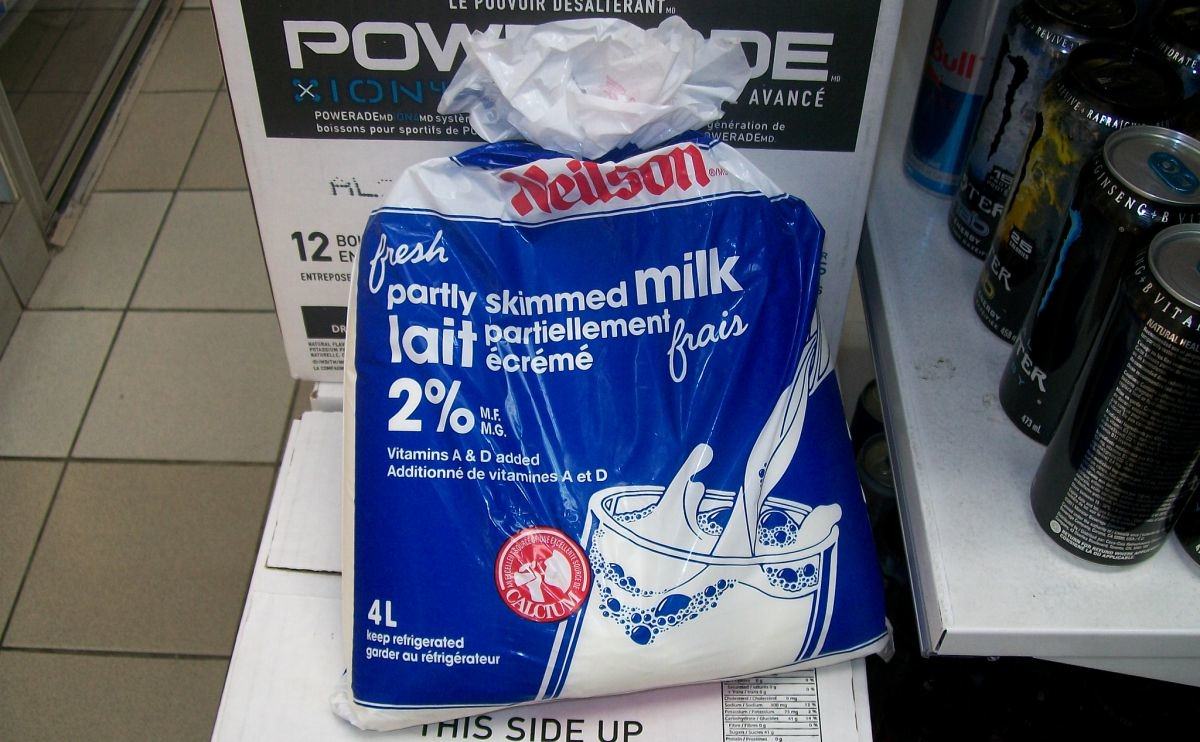 Golden Hills Elementary School, near Omaha, Nebraska, changed all of its milk cartons to bagged milk this year, citing tests (done in-house) that kids were finishing more of their milk when it arrived in bags than when in cartons. Golden Hills is the latest in a long line of worldwide experiments with bagged milk, some more successful than others.

In the mid-1990s, Philadelphia schools briefly tried out bagged milk. (My elementary school, in the western suburbs of the city, also gave it a shot.) Both regular and chocolate milk would arrive in clear plastic pouches, with no obvious way to open them. Provided alongside the pouch was a short yellow straw, narrower and shorter than a typical straw, and with a sharpened point on one end. It took a bit of practice to figure out the trick; you had to cover the blunt end of the straw with your thumb while stabbing into the pouch, otherwise milk would fly out.

In eastern Canada, from Ontario through Quebec and into the less-populated Maritime provinces, bagged milk is the norm, but not in personal-sized pouches. Canadians buy their milk in a large bag, which contains three smaller bags packed full of milk. All three bags together equal four liters of milk. When you want some, you carefully insert the bag into a plain pitcher and snip off the corner of the bag. There is no way to close it, though I suppose it’s technically possible to fold it over.

This practice is bizarre to Americans. But our own solutions – cardboard cartons and plastic jugs – are fairly new, according to various histories, like The Atlantic‘s nice history of the carton. Up until the late 1960s, milk arrived in heavy glass bottles, which were both easy to use and to reuse. But they were also heavy, which added to transport costs, and prone to breakage, so around the 1960s, alternatives began popping up. In Canada, DuPont introduced bagged milk in 1967, around the same time that other companies introduced plastic jugs and cardboard cartons, but they weren’t very popular until 1970, when Canada began its conversion to the metric system. 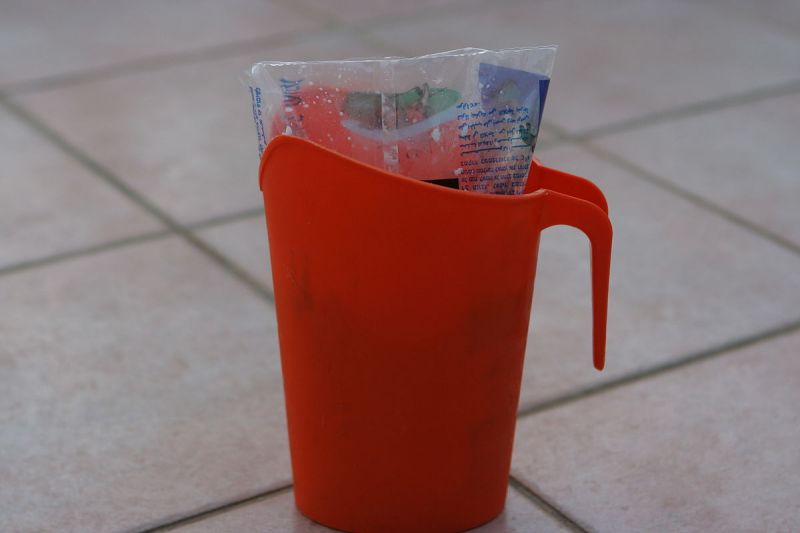 “Milk Bag Plastic Pitcher” by Ilan Costica – Own work. Licensed under CC BY 3.0 via Commons.

Everything in Canada, including milk, had to be rejiggered to be sold in metric units. No more quarts and gallons of milk: liters were the way to go. And it turned out that the thin plastic bags used for DuPont’s milk were extremely amenable to size changes. It was no problem at all to seal the bags in a different spot to make them metric-compliant. Jugs and cartons, on the other hand, had to be redesigned and manufactured from scratch, a significant disadvantage. They never really succeeded in making up for lost time, and bagged milk now reigns in Canada.

The obvious question, though, is why Canadians have put up with the bagged milk for so long. It requires extra equipment (scissors and a pitcher), it can’t be resealed and so goes bad quickly, and it’s prone to spilling if cut or poured incorrectly. There are also environmental downsides; in much of Canada, the bags aren’t recyclable, unlike the jugs or cartons. So what’s the deal?

Bagged milk does, of course, have a few benefits. For one, you’re opening a smaller amount of milk at a time, so even though the opened bag does go bad faster, the remaining sealed bags in your 4-liter three-pack stay good for much longer. For another, bagged milk tends to be a little big cheaper, simply because plastic bags are cheaper to make than cardboard cartons or plastic jugs.

Golden Hills’ experiment is a curious one: The food service director for the school thinks kids drink more of the bagged milk because, unlike with cartons, they can see exactly how much they’ve drunk. I can find no study to indicate whether bags or cartons tend to result in more milk drunk, but sure, why not? I do remember liking the weird little milk pouches.

you wrote big cheaper instead of a bit cheaper

I am Canadian. I actually hate bagged milk. We do have the option of buying milk in jugs in certain corner stores. Milk bags can leak and the top of the bag can flop over if you are pouring milk into your tea, etc. causing the milk to spill. Every time this happens I end up cursing them…lol. Milk doesn’t last long enough in our house for it to go bad. And, those little clipped plastic corners are a pain… especially when certain family members fail to dispose of them. They can be a choking hazard for little ones.

Eh, the open bag spoiling quicker is very easy to fix. Just use a little clip and it’ll spoil slower than your not-really-sealed carton.

Can’t lift the heavy 4L jug and it spoils quickly. The smaller bags of milk get used up (then recycled) and are then not taking up fridge space like a big jug would.

I was a Canadian combat engineer and i always loved the fact that the water purification machine we have for emergency help has a the same bagger so when we go to place like the Philippines after the typhoon, we give them bagged water and they ways look at us like what the heck do i do with this.

All I can see in my head is leaks & spills. Even Ziplock is far fom air-tight, so I assume faster spoilage. Plastic milk cartons & plastic bags leak horrid chemical flavors into milk & sandwiches, so I can’t imagine the taste being good.