Pigs and Pirouettes: In Vermont, You Can Catch a Ballet at a Farm

What goes together better than farming and ballet? 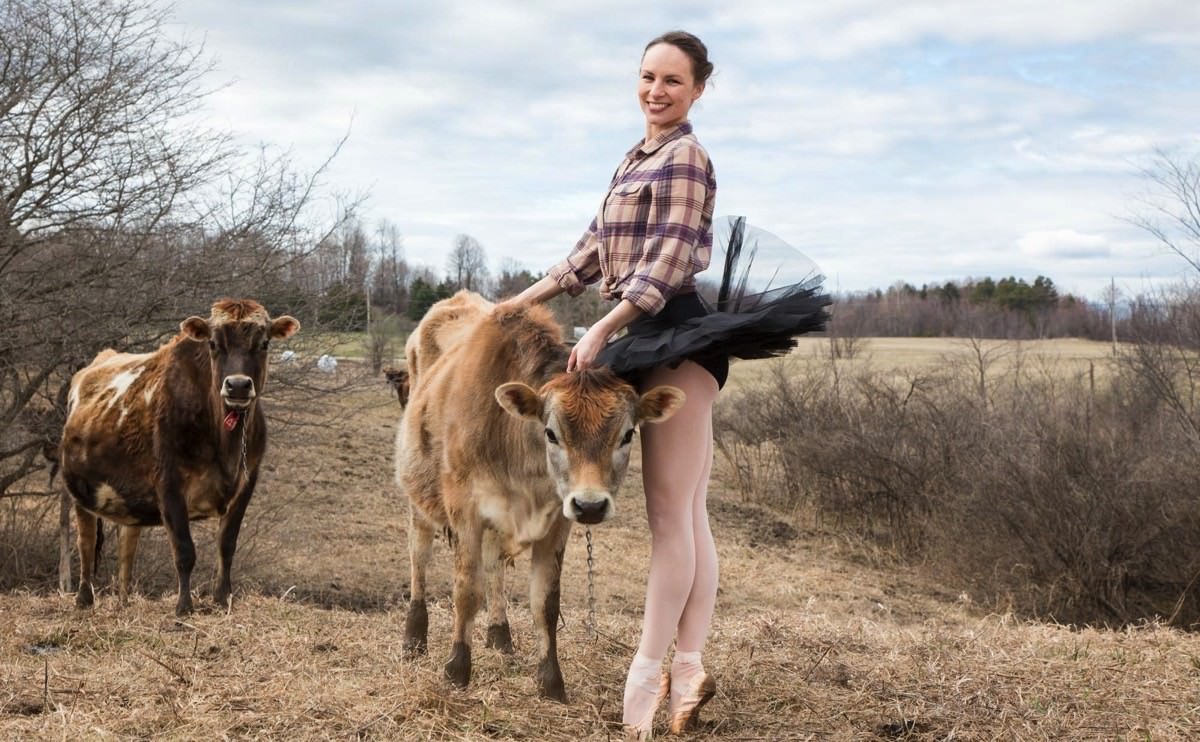 Farm to Ballet describes itself as “a dance project intended to celebrate Vermont’s farming culture while expanding classical ballet’s audience.” No small feat! To accomplish that goal, the members of the Farm to Ballet troupe set up performances all around Vermont throughout this summer. Each performance not only takes place at a farm, but is farm-themed.

The ballet is an original composition. Set to Vivaldi’s “The Four Seasons,” the narrative tells the story of Vermont’s farms from spring to fall (winter in Vermont has many charms, but not so much for agriculture). It begins with geese returning north in the springtime, followed by the farmers planting their crops for the year, then the entire process of growing, harvesting, and – very Vermont-y – a farmstand scene in which happy customers pick up their produce, before the geese fly back south for the winter, ending the cycle.

All proceeds from the ticket sales go to various non-profit agricultural organizations, which sometimes is the actual farm that’s staging the performance. Shelburne Farms, a working farm and educational center just south of Burlington and close to Lake Champlain, was one of those farms that was both the stage and the recipient of the ticket sales.

Farm to Ballet doesn’t need much in the way of setup; the troupe brings its own makeshift barn-like structure and solar panel for energy, according to Civil Eats. And the performance is family-friendly, with kids welcome to wander around.

There are still a few more performances lined up for August, if you find yourself in Vermont and in the mood for ballet.

Popular
Why Don’t We Eat Turkey Eggs?Dan Nosowitz
7 Smokable Plants You Can Grow That Aren’t MarijuanaBrian Barth
What’s the Story, Wishbone?Rebecca Katzman
6 Differences Between Llamas and AlpacasAndrew Amelinckx
Goat Sex: Everything You Wanted to Know But Were Afraid to AskAndrew Amelinckx
Explore Modern Farmer
Related
Animals, MTMF
Meet the Maine Teenager-Turned-Landscaper Thanks to Grazing GoatsBridget Shirvell
Animals, Food & Drink, Lifestyle
The Great (Sticker Shock) ThanksgivingLindsay Campbell
Labor, Politics
For Young Farmers, Land Access Will Make or Break the 2023 Farm...Emily Baron Cadloff
Lifestyle
This Kansas Farm Gives Veterans A New Path To Civilian LifeLindsay Campbell
wpDiscuz
We use cookies on our website to give you the most relevant experience by remembering your preferences and repeat visits. By clicking “Accept”, you consent to the use of ALL the cookies.
Cookie settings ACCEPT
Privacy & Cookies Policy