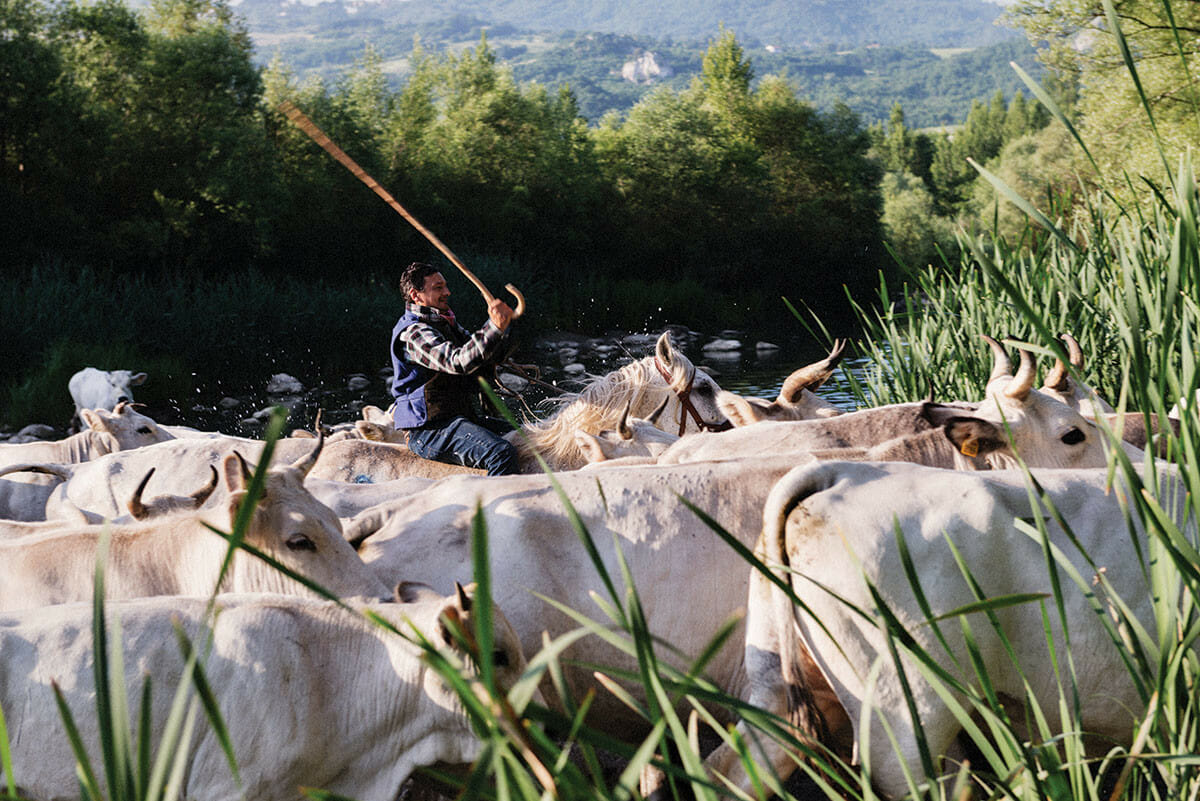 Most 21st-Century Ranchers move their livestock by truck or rail, but in Southern Italy’s Molise region, cheesemaker Carmelina Colantuono is steadfastly preserving a tradition that goes back at least 2,500 years. As summer approaches, Colantuono and a couple dozen friends, family members, and hired hands drive her 300 Podolica cows to cooler mountain pastures the hard way, traveling more than 100 miles along ancient herding paths in about five days – a journey called the transumanza. These trails, or tratturi, are practically etched in Colantuono’s DNA. The fourth-generation cattle rancher didn’t meet her father until two months after she was born, in April 1969, because he was in Puglia tending to the herds. Colantuono, dubbed “the last cowgirl,” couldn’t participate in the annual pilgrimages until she was 20. “Women were not allowed to ride,” she explains. “It was considered men’s work.” Ironically, she rarely gets to saddle up anymore because she’s too busy with logistics. Three months before the drive, Colantuono starts making calls to secure permits and arrange to stop or divert traffic in the 20 towns through which the cows march. “We do it,” she says, “out of respect for our history, respect for the sacrifices of our family, and to bring greater awareness of our culture to new generations.” 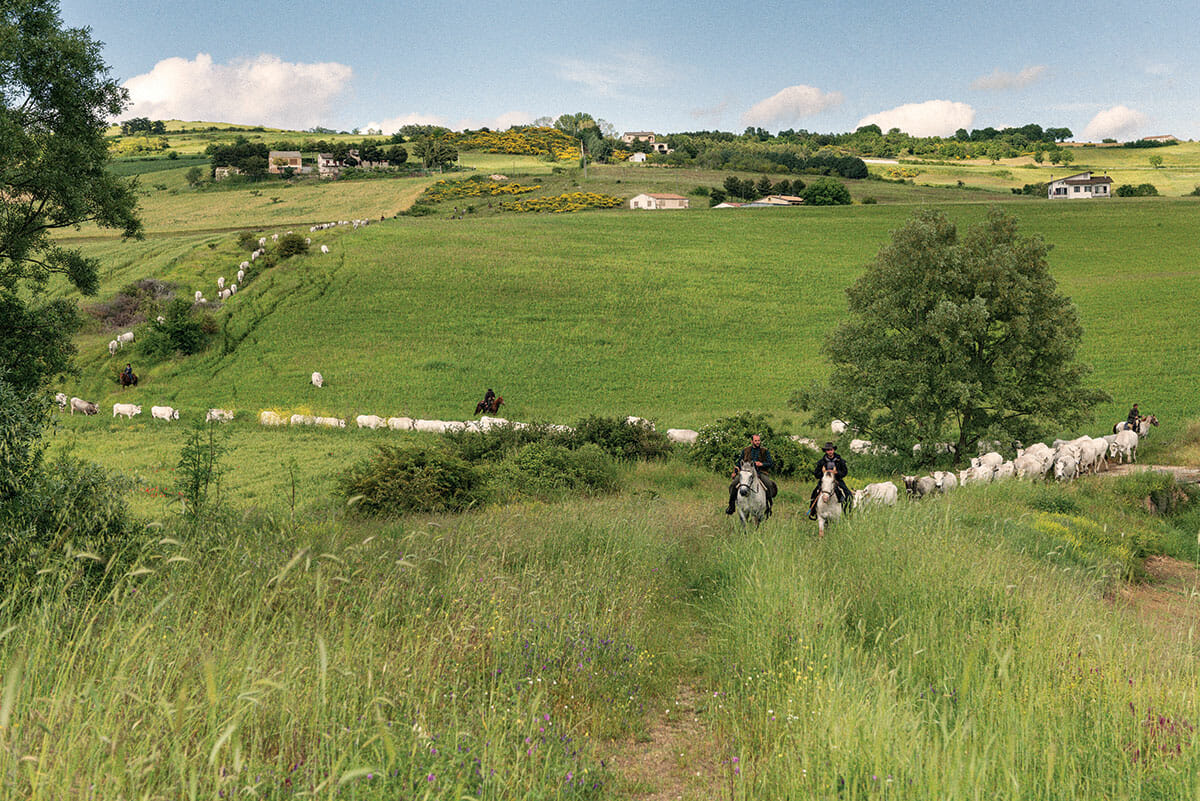 The ancient herding trails, called tratturi, can be 400 feet wide in some places and as narrow as a single cow in others. 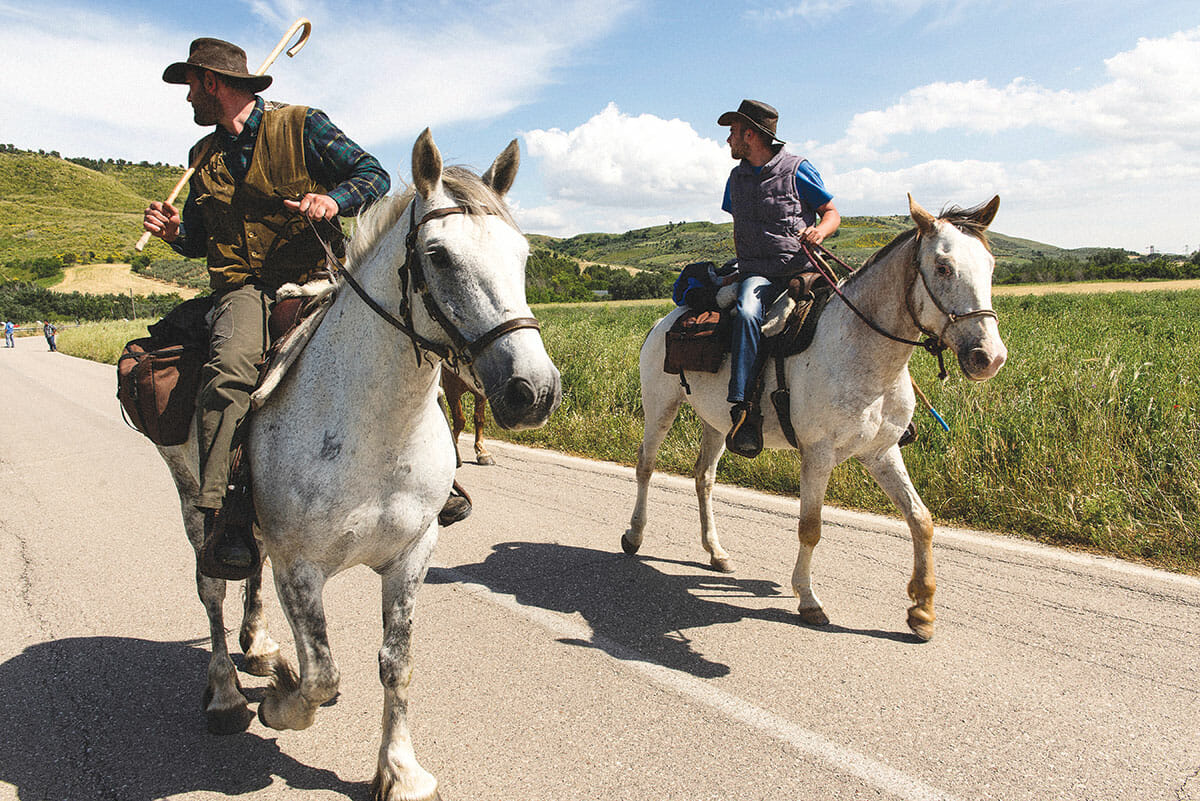 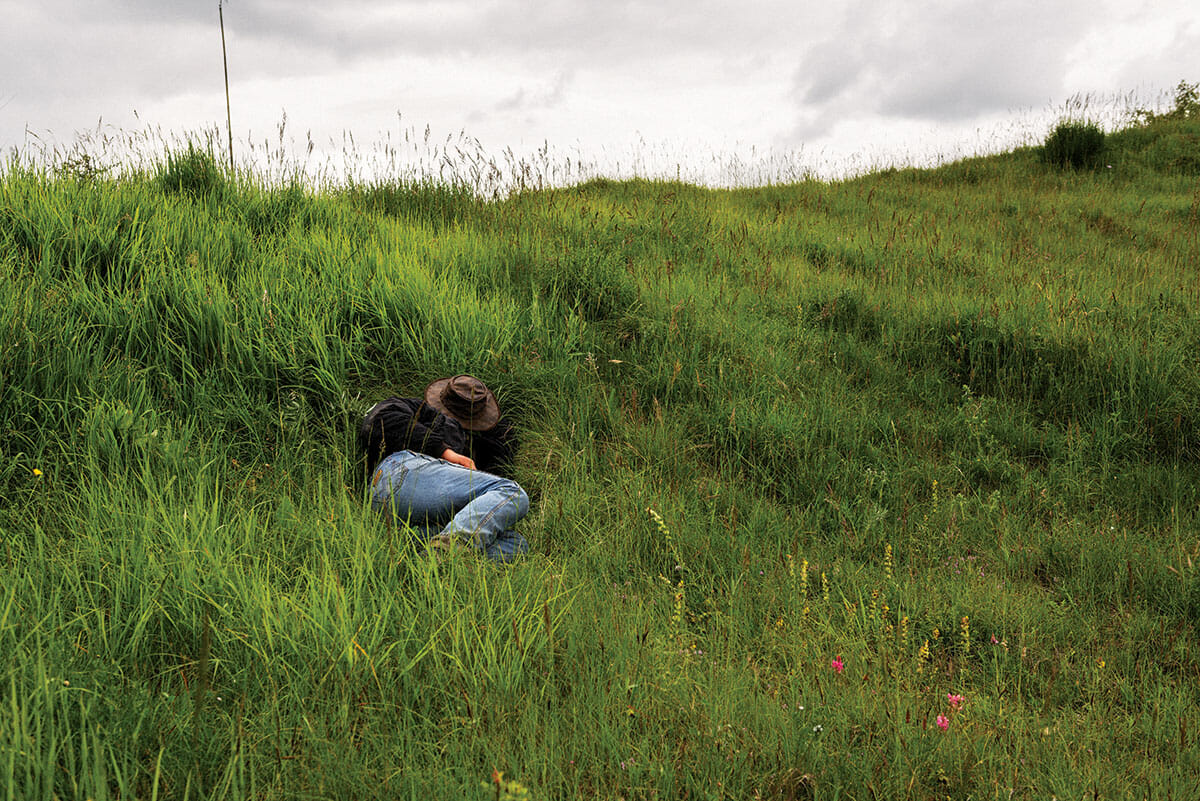 To avoid the heat of day, the drive often starts before dawn. You take your rest when, and where, you find it. 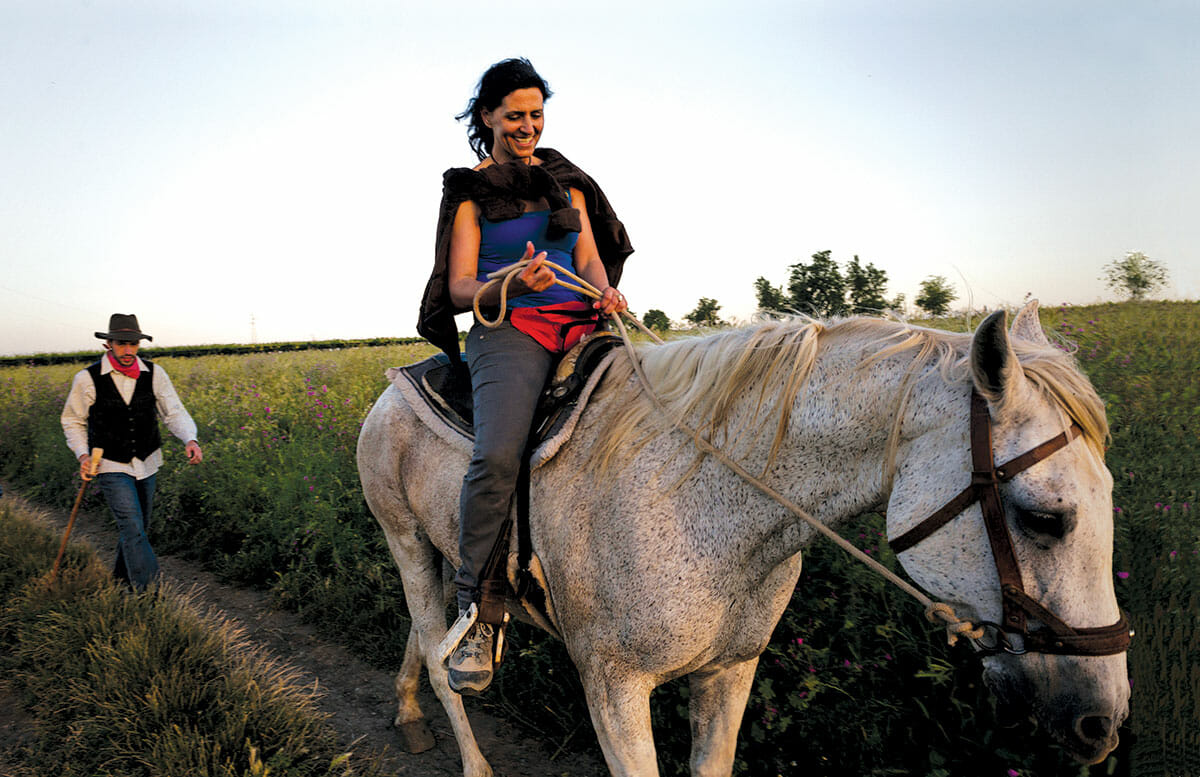 Fourth-generation rancher and cheesemaker Carmelina Colantuono is known in Italy as “the last cowgirl.”

When the unexpected occurs, it’s nice to be able to call on mechanical assistance (this horse was safely hoisted out of the ditch). 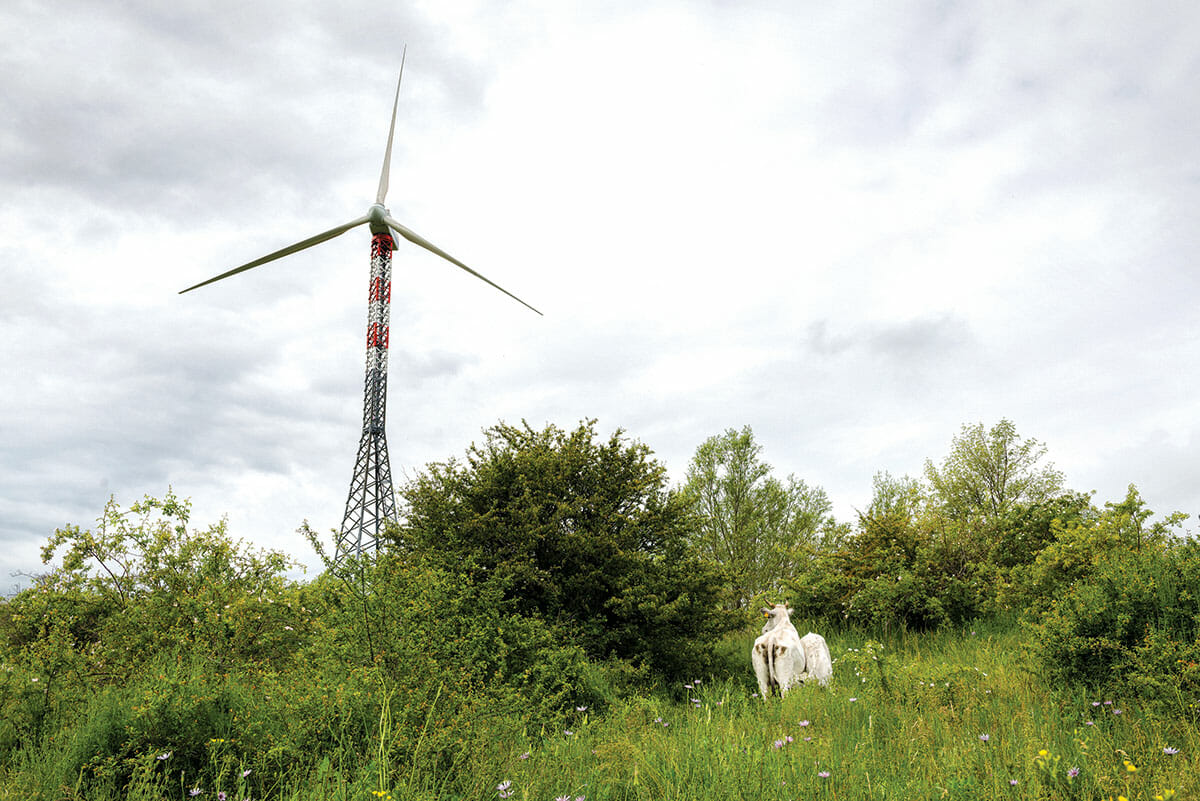 Modern technology and ancient tradition often intersect on the road from San Marco in Lamis to Frosolone. 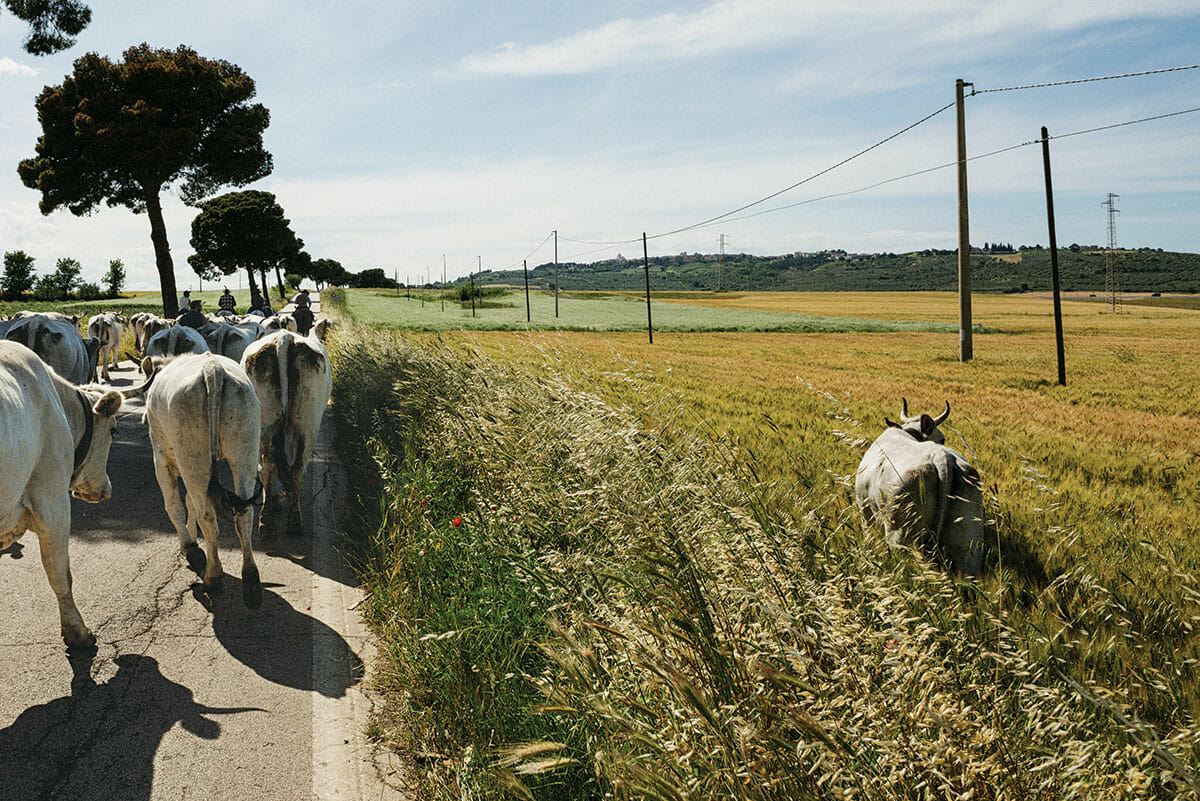 Though the herd knows the way, sometimes an animal will stray from the path. Job security for the cowboys. 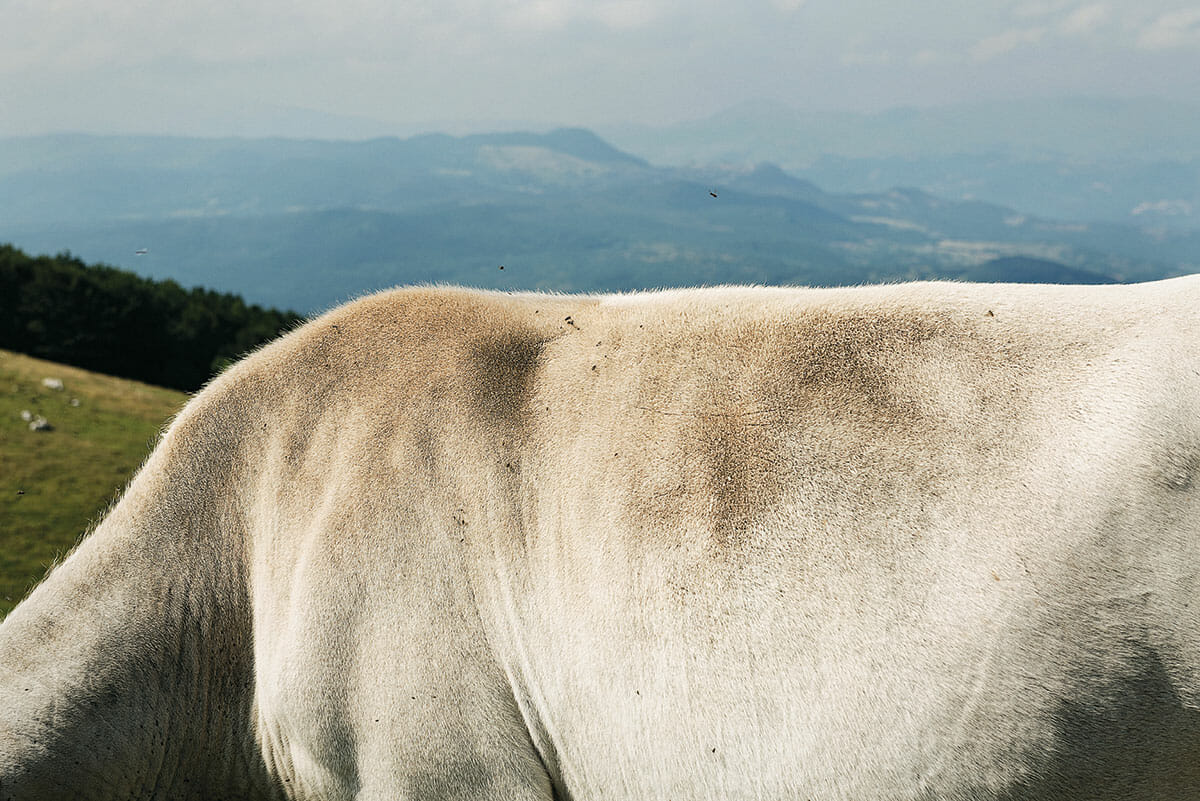 The journey may seem long, but the rewards, in the form of good pasture, are worth every step.