“The beauty in this design is its simplicity, but don’t let that fool you into thinking it was easy to develop. We had to go down a gauntlet of parameters. Don’t underestimate the power of a good design,” says Mark Winterer of Recover Green Roofs, the company that designed and built the largest organic rooftop […] 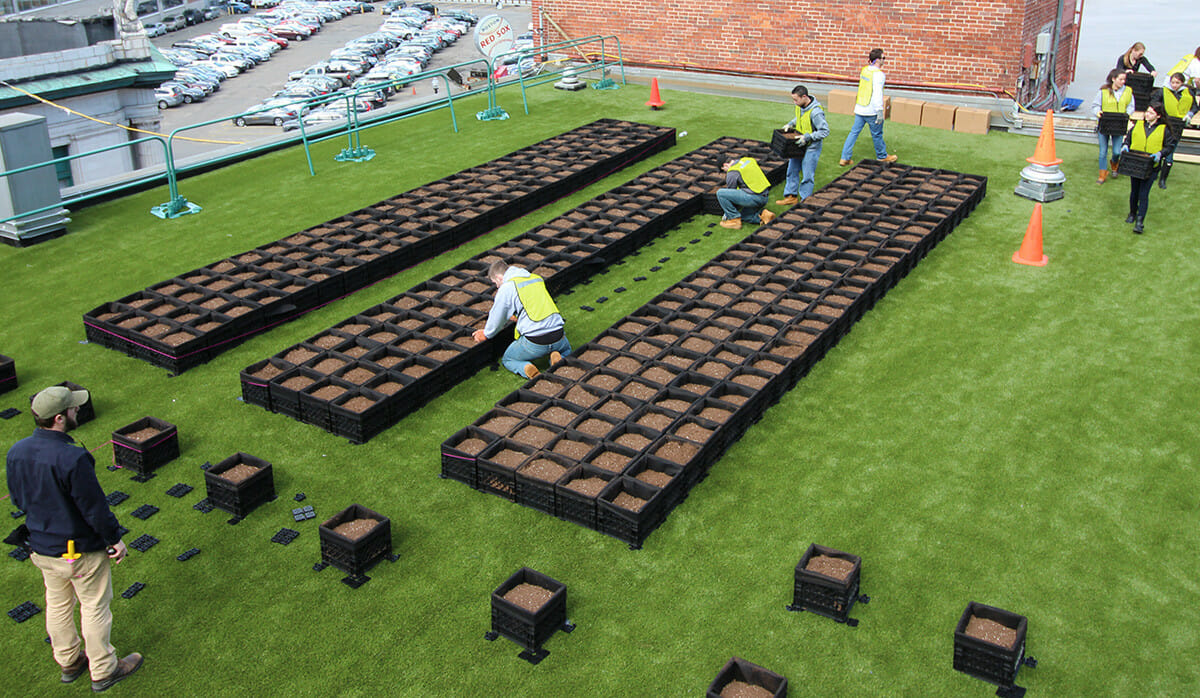 “The beauty in this design is its simplicity, but don’t let that fool you into thinking it was easy to develop. We had to go down a gauntlet of parameters. Don’t underestimate the power of a good design,” says Mark Winterer of Recover Green Roofs, the company that designed and built the largest organic rooftop garden in the major leagues.

We’ve already written about Fenway Farms, but thought it was worth exploring the nitty-gritty of how the garden was put together. Winterer, the co-founder of Recover Green Roofs, is going to be our guide.

Winterer, 35, who is originally from Essex, Connecticut, co-founded Recover Green Roofs with Brendan Shea back in 2009 and they began operations the next year. They have eight full-time employees and several more part-timers. He says because green roofs “are such a niche market, we do everything and anything,” for private residences, commercial spaces and schools. They’ve even built some rooftop chicken coops.

Winterer says he was approached a few years ago by Chris Knight, Fenway’s manager of facilities maintenance, about a basic extensive green roof using sedum, a genus of perennial flowering plants. When Linda Pizzuti Henry, the wife of Red Sox principal owner John W. Henry, got involved and became interested in a rooftop garden, the design was changed and the project took off.

The three must-haves for a rooftop farm, says Winterer, are a roof that can handle the weight, good waterproofing capacity and a space that meets safety requirements (basically, enough ways to safely get off the roof). With the help of Knight they decided on a 5,000-square foot-space behind the Gate A Fenway Park faÁ§ade.

Winterer says a major issue with building rooftop farms is that the technology and techniques generally used in their construction are based on German systems developed for green roofs that use sedum. These succulent plants don’t require anything close to the nutrients that fruits and vegetables need, and because of this difference, water runoff, leakage and weight issues have to be addressed when constructing a system for growing produce.

“The beauty in this design is its simplicity, but don’t let that fool you into thinking it was easy to develop. We had to go down a gauntlet of parameters. Don’t underestimate the power of a good design,” says Mark Winterer

“We didn’t want to waste any water nor flush any nutrients down the drains, so we designed an on-demand smart drip irrigation system which delivers water directly to the roots,” says Winterer. The system collects a variety of data, including information from weather radar, to determine when to irrigate. It’s connected to a website where it can all be monitored remotely and it even warns Winterer and Shea via their iPhones if there’s a problem.

The design took several months to complete. Installation began by early March, with the help of more than 60 volunteers from organizations, including some high school students. They were “up and running” by opening day on April 13, says Winterer. The project came in at about $200,000.

Fenway Farms was planted and is being maintained by Green City Growers. It’s expected to produce about 4,000 pounds of organic fruit and vegetables annually.

The company has done similar projects in the past, including a rooftop farm on top of a Whole Foods Market, in Lynnfield, Massachusetts, which was even larger than the project at the ballpark, coming in at 17,000 square feet.

Winterer says he’s happy with how the project turned out and credits Fenway Park’s sturdy construction (it’s more than 100 years old) with making it a little easier to create the farm.

“There’s a reason Fenway is the oldest ballpark in America and that’s because it was built to last,” he says. “It’s strong enough to hold the weight of a rooftop farm. Most new buildings are built to the bare minimum standards and are not strong enough to support any additional weight. Buildings are not built like they used to be, and I think the advent of the green roof brings a renaissance in building better buildings.”

Popular
7 Smokable Plants You Can Grow That Aren’t MarijuanaBrian Barth
How to (Actually) Get Rid of Fruit FliesEmily Baron Cadloff
Yes, the Government Really Does Stash Billions of Pounds of Cheese in...Emily Baron Cadloff
What to Do With an Abundance of PeppersShelby Vittek
6 Differences Between Llamas and AlpacasAndrew Amelinckx
Explore Modern Farmer
Related
Environment, Plants
Making the Case for IntercroppingShea Swenson
MTMF
Meet the Modern Farmer Helping Immigrant Farmers Sell Their ProduceBridget Shirvell
Animals, MTMF
Paddleboarding Goats Make a Splash on Prince Edward IslandNoah Lederman
Plants
Rice Growers Continue to Battle Weedy EnemyLindsay Campbell
wpDiscuz
We use cookies on our website to give you the most relevant experience by remembering your preferences and repeat visits. By clicking “Accept”, you consent to the use of ALL the cookies.
Cookie settings ACCEPT
Privacy & Cookies Policy