Boston's Fenway Park, home of the Red Sox, is known for a high left field wall, nicknamed "The Green Monster.” Now, America's oldest Major League Baseball field still in use will be known for something else that's green: the largest organic rooftop garden in the Majors. 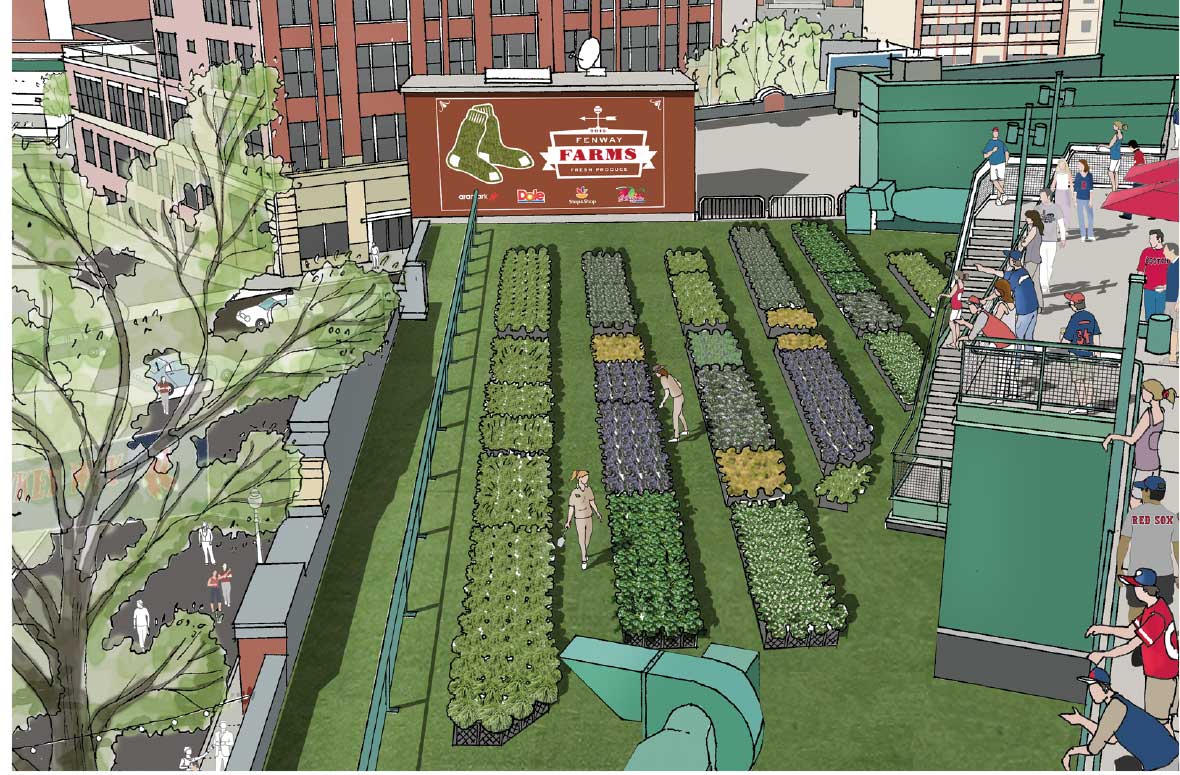 The new garden, dubbed “Fenway Farms,” is located behind the Gate A Fenway Park faÁ§ade and will include a rotating lineup of seasonal vegetables, from kale to sweet peppers, along with herbs. The harvest will be used in food sold at the park, including dishes served at the EMC Club, the exclusive restaurant and seating area located behind home plate, according to the Boston Red Sox.

The 5,000-square-foot roof space, which was planted last week, will generate an estimated 4,000 pounds of produce annually, Zineb Curran, the director of corporate communications for the Red Sox, told Modern Farmer in an email.

Sorry, Red Sox fans, the new garden isn’t going to lower the price of the concessions at the stadium, according to Curran.

Linda Pizzuti Henry, the wife of Red Sox principal owner John W. Henry, came up with the idea for the garden, says Curran.

Besides providing fresh, organic vegetables, the garden also reduces energy costs by insulating the building below it and will be a “teaching tool” for area children about healthy eating and the local environment, according to the organization.

The Red Sox are now one of a handful of Major League teams that can boast an organic garden at their stadium. The others include the San Diego Padres, Colorado Rockies and San Francisco Giants. There was some dispute last year on exactly who was first. But it appears the Red Sox have the biggest organic garden to date, since the Giants’ garden space, which had been billed as the biggest, comes in at 4,320 square feet.

Presented by Stop & Shop, Dole, Sage Fruit and Aramark, the park’s concessionaire, the garden’s planters and irrigation system were built by a local company, Recover Green Roofs. The garden was planted and is being maintained by Green City Growers, another local enterprise.

This isn’t the first time in the park’s 103-year history that there’s been something horticultural, besides the grassy playing field, at Fenway. Back in 2001, then-Bullpen coach John Cumberland planted 18 beefsteak tomato plants behind the mound in the bullpen in an attempt to short circuit the club’s inability to win a World Series since 1918.

It’s hard to say if it was the tomatoes that did the trick, but the Red Sox did win the World Series three years later, in 2004. Unfortunately for Cumberland, he was fired a few months after installing his (possibly) game-changing plants.