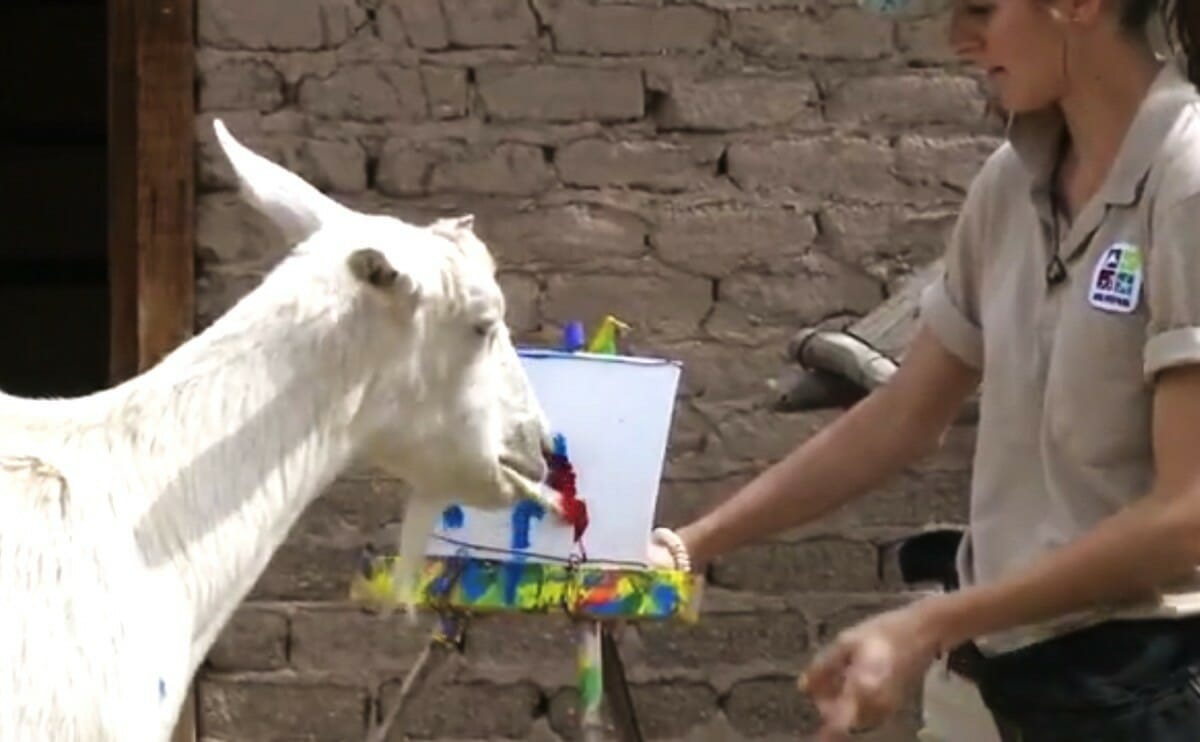 Bodie, a 4-year-old goat residing in Albuquerque’s ABQ BioPark, has begun painting, or at least smearing paint on a canvas with a paintbrush held between his goaty teeth. Bodie is impressive both for his painting ability and for his ability to not eat the paintbrush, paint or canvas.

Animals in various forms of captivity, especially zoos, have all their bodily needs taken care of, which is why the lifespan of most animals is much longer in captivity than in the wild. (Large mammals like elephants, walruses, and orcas are the exception.) But there’s a larger ethical issue with captive animals than just their physical well-being: are they mentally fulfilled?

The solution is typically a technique called “enrichment,” in which the keepers figure out a way to stimulate an animal’s natural instincts. The animal might not need to use those instincts to survive, but without performing them, need or not, the animal might become depressed, lethargic or obese. This is why it’s recommended that you play with a cat, giving them something to chase. But with wild animals, it can be trickier.

Often the chosen method is an attempt to replicate how an animal would find food in the wild, that being probably the most pressing wild instinct. In the Bronx Zoo, for example, squirrel monkeys are given a big block of Jell-O with blueberries inside. The monkeys aren’t familiar with Jell-O, of course, but foraging for fruit is what they’d naturally be doing in the wild, so, theoretically, having the monkeys dig through Jell-O to find blueberries can keep the animals feeling comfortable and stimulated.

For some animals, enrichment techniques can take odd forms. Painting might seem particularly questionable, but having elephants paint has long been a way to stimulate the elephants’ need to carefully manipulate objects in small motions with their trunks. We’ve never seen a goat paint before, but the idea is the same: goats use their highly dexterous lips to feed and move objects, so why not have a goat paint as well?

Bodie has become a pretty big hit in Albuquerque; KRQE News has a great time filming him painting and saying “Van Goat” repeatedly. And, amazingly, the goat’s paintings, along with a host of other animal artworks, are actually for sale over at Weems Gallery, though you can’t seem to purchase them online. Still, Bodie seems like a regular Francisgoat de Goya! Paul Goatguin! Pablgoat Picassgoat! We could go on some more, but thankfully for all of us, we won’t.