Rural America is becoming home to a burgeoning LGBT community, though it isn't always easy. 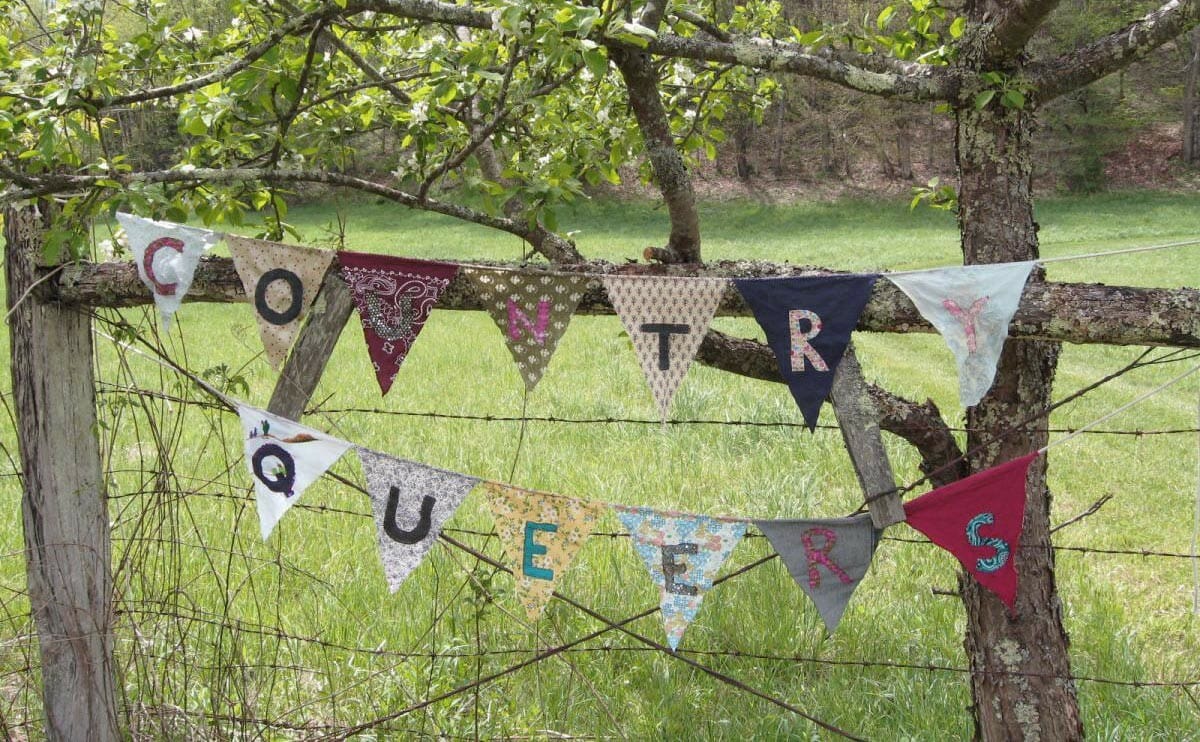 In a black and white photo snapped in the early 1940s, a young, central Ohio farm girl beams from beneath a straw hat. Around her neck is a small scarf; she wears a pair of overalls. The photo arrived with a simple but joyfully blunt note from the subject, now a 77-year-old farmer in rural Ohio: “Here’s me, butch Gael!”

Only age 9 when it was taken, she already had a faint understanding that she was a lesbian.

Aware of her differences, Gael buried a lack of love for frills in acceptable rural tomboyishness. For more than a decade she hid that she was a lesbian, until coming out while attending Vassar College (she would become one of the animal skin-clad Wolf Girls). Gael says that throughout her early life, a quiet understanding prevailed. “Growing up, I recall that there were others on farms, farming alone, in the fields.” These were the bachelor farmers, living together, who claimed to sleep in twin beds, but no one really knew.

Now in her autumn years, Gael flies a rainbow flag outside the 250-acre Ohio farm where she lives with her longtime partner. From the porch where her flag flies, Gael says she’s been able to witness great attitude changes towards the nation’s LGBT community. “It’s so different than when I was the young girl in that photo,” she says. “Today, there’s legalized same sex marriage. More queer farmers live in rural areas and are supported through their CSAs and farmstands. We might still be a curiosity, but we are a curiosity that has power and something to say.”

Rural America is indeed becoming more attractive to a burgeoning LGBT population. In the early years, cities such as Oakland and Portland led the lesbian-fueled Women’s Back to the Land Movement of the ’60s and ’70s. Now things are happening far from urban hubs. “As queers, as gays and lesbians, I think we’ve always been much closer to nature than other people. Our senses are keener, we nurture and we tend to have a larger view of things,” Gael says. “I think there’s lots we can do to help create a new world. If the human race is to survive, gay people have to have more influence.”

From California to the Mississippi, an increasing number of queer people are supplying the nation’s food, continuing to break down barriers and tackle discrimination. Many are farming as married couples, partners or friends. Yet, what is the draw to remote areas? For Jonah Mossberg, a Connecticut transgender farmer who wrote and directed Out Here, a grassroots documentary about queer farmers, rural life has helped him at last “be comfortable in my own skin.”

“Inspiration for the film came from my own experience of coming to terms with my gender identity and sexuality,” Mossberg says. “I was really having a hard time, not feeling good in my body. I got involved in bad things. Then I started working on a farm with both straight and queer farmers and it made me feel strong; it made me feel like everyone else around me.” 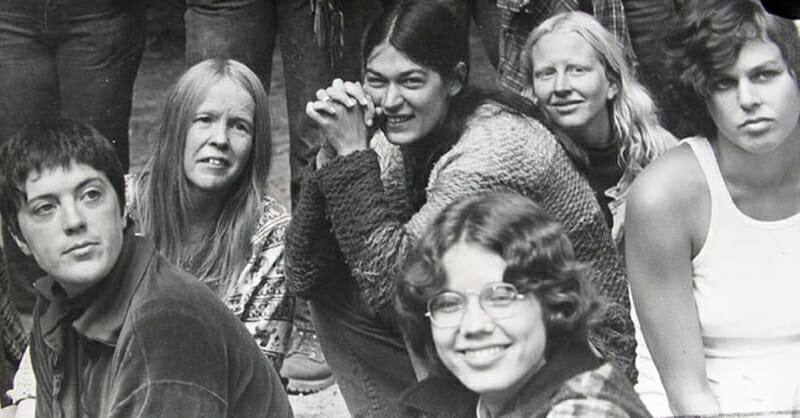 Leaders of the women’s back to the land movement gather at the Country Women festival. / Courtesy Lynda Koolish.

The community has grown so much that the U.S. Department of Agriculture (USDA), in collaboration with the National Center for Lesbian Rights, hosts the Rural Pride Campaign, day-long summits to discuss the LGBT experience in rural areas. (Civil Eats did a nice piece on this last year.) And the numbers are only expected to increase as more LGBT farmers both come out and call rural regions home.

Prejudice and hatred do still exist, however. Alex “Howdy” Paul, now a 21-year-old animal science student at Iowa State University, was born on a Griswold, Iowa farm. Hoping to one day farm in his hometown community, Paul went to Colorado’s front range to work on a large hay and cattle operation. He was working in Lafayette, delivering bales with older farmers, when he had firsthand encounters with a hateful co-worker.

“I feared for my life because I worked next to this guy,” Paul says. “Whether he sensed I was gay, I don’t know. I knew not to come out. But he kept saying how much he hated gays and that if saw any walking down the street, he would beat the absolute shit out of them. And this talk arrived everyday.”

Paul says the Colorado experience has prevented him from coming out while taking up work on farms in Iowa. “Socially, everything is moving forward and what I think matters is the farm work,” Paul says. “But I’m still reluctant to talk about it and they don’t ask. The day hasn’t come when I can say: ‘Hi, I’m Howdy. Can I work for you, and by the way, I’m also gay.’”

Yet Matt Russell and his husband, Patrick Standley, who farm the 110-acre Coyote Run Farm in Lacona, Iowa, have experienced a welcoming community. “There’s no gay ghetto in Iowa, and even though it’s not a bastion of liberalism, they let you live your life the way you want here,” says Russell, the State Food Policy Project Coordinator at Drake University.

When moving to the area in 2005, Russell says they made it a point to introduce themselves to their neighbors. Having grown up in rural Iowa, Russell knew that knocking on doors and not keeping to themselves prevented locals from “writing their own story about us.” He adds, “If you don’t let them know about you, they will come up with something lots wilder.”

It enabled the couple to easily integrate into the community, where they continually sell out of produce at the farmers market. “It’s been great,” Russell adds, “because now everyone wants to buy from the two gay farmers.” Today’s vibrant food culture, Russell says, is deeply connected to the women’s back-to-the-land movement of the ’60s and ’70s, strengthened by lesbian farmers.

It was 1969 when Carmen Goodyear dropped out of Vassar to live on the fringes of Mendocino, California. She began farming, and with fellow lesbians from across the country, began writing and publishing the consciousness-raising, feminist Country Women magazine from their cabins. Publishing for a decade, they wrote many articles on how to farm.

“The roots of what today is the organic, sustainable food movement began right here,” Goodyear says. “Women came from across the country to learn how to farm, with many staying but others also putting down roots and farming in Oregon and even Missouri. Many people dropped out in the ’70s, but those who loved food kept doing it and the culinary interest boomed.”

The couple documented that movement in their award-winning film “Women on the Land: Creating Conscious Community“, that not only documents what transpired in the ’60s and ’70s but today continues to inspire women who dream of farming. They also produced and filmed the highly acclaimed “Freedom to Marry: The Journey to Justice“, documenting the February 12th, 2005, San Francisco celebration when Mayor Gavin Newsom recognized the right of same-sex couples to wed.

‘There are bars here, but I don’t want to hang out in a dude bar. It’s not a great way to meet other gay farmers.’

LGBT farmers and activists like Goodyear and Gael and the many others working their land quietly — from California to Kansas to Georgia — have helped forge the way for queer farmers today.

“Even in the ’80s when returning to Ohio, I was petrified to come out,” Gael says. “I remembered rocks being thrown at me in high school. But now I fly a rainbow flag on my house. Everything is changing in this country regarding gays and I’m not so odd anymore. It’s still isolating. I’m not invited to parties. But I’m an hour from Columbus and Stonewall (a Columbus community center that for 30 years has offered social activities and services to the LGBT community) and there are more rural places cropping up where we are finding one another.”

In upper Wisconsin, along Lake Superior, Michael Stanitis farms his Sassy Nanny 40-acre goat farm where he makes a prized goat cheese. Stanitis, 49, farms alone and says he often wishes there was a nearby LGBT hub. But Stanitis likes the lifestyle and the work and figures a partner may eventually find him. He also has two children with a nearby lesbian couple, something he says has enriched his life.

“What I want to tell you about is being isolated from a gay population,” Stanitis says. “There are bars here, but I don’t want to hang out in a dude bar, it’s not a great way to meet other gay farmers and I don’t think there are many up here.”

So why would he choose the life? The region is liberal and his neighbors and customers rather relish his preferences. They find him engaging, different, unusual and brave. Plus, he makes killer cheese. “I don’t have trouble being gay up here, but I do admit it would be great if some guy wanted to meet a wonderful gay farmer who makes cheese!”

He chose to live in a rural setting despite the drawbacks because “I didn’t want to live in an urban, gay bubble,” Stanitis says. “It’s not interesting to me, I’m not interested in hanging out in clubs anymore. There’s lots to be gained from living rurally. You can’t be caught up in chasing the dollar. What you get instead is a nice lifestyle. Farming gives you a great connection to life.”

For his part, Mossberg is grateful for the gays and lesbians who farmed before him as they’ve prepared for him “a beautiful life.” It is, he adds, a lifestyle where you “get to be your own you.”

“Farming,” he says, “is a place where the many queer people struggling with not feeling good in their heads and bodies can put their fingers in the soil and feel right, feel nourished.”

Top photo: Rachel Garringer of Hillsboro, West Virginia, has complied a multimedia oral history project documenting Country Queers across the country. Fueled by a 2014 Kickstarter Campaign, Garringer has traveled nearly 7,000 miles by car to collect the experiences, joys, trials and tribulations of our nation’s rural queers.

Lori Rotenberk is a Chicago-based journalist and frequent Modern Farmer contributor. You can follow her on Twitter here.