The best ways to secure your farm. 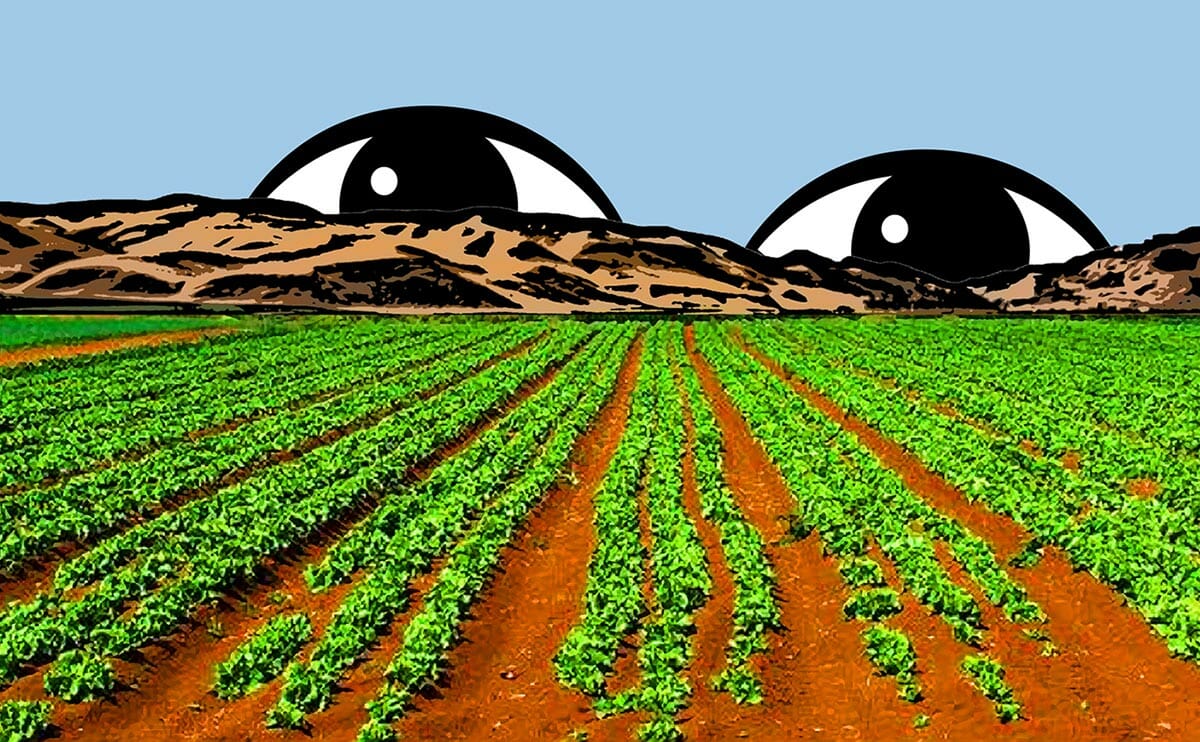 Once, farm heists had no name. But as rural crime worsened in many states, a category emerged just for agriculture, taking into consideration its unique security issues. Now, if a computer stolen from a California farmer’s house is used for farm data, it’s not classified as just any burglary; the offense is a rural crime. But though many sheriff departments have added rural crime units, staff is often limited.

When prices soar on certain commodities, so do thefts. In the first quarter of 2013, metal theft reportedly cost Fresno County, California $1.11 million — more than the entire annual loss for some past years. Even stolen tractors and plows were hacked to bits.

And so, as thieves polish their farm skills, farmers are sharpening their cyber-sabers. They’re also posting signs, patching fences, and taking other simple steps to deter crime.

Luckily we have some sheriff-endorsed ways to wreck a thief’s day.

Some farms have security holes big enough to drive a truck through — stuffed with its goods. To find these holes before thieves do, conduct a survey. In San Luis Obispo County, California, the service is offered through the sheriff’s rural crime prevention program. “We highly recommend conducting a Farm/Ranch Security Survey – and we do get the word out” to this community, says Marsha Mann, a rural crime specialist.

The free survey is performed by another rural crime prevention specialist, Brandy Swain. “Our county has been facing theft from barns, sheds and outbuildings,” she says — often tools, generators and welders. Swain surveys by walking the main property; her advice may include fixing fences, improving lighting around buildings, and posting signs for trespassing. “Most of these suggestions seem like common sense, but are sometimes overlooked,” she says.

For farmers doing their own security survey, the county offers a checklist to help. They recommend working from outer perimeter to interior. Also, take a critical look at your operation at least every six months.

On its rural security planning page, Purdue University says a survey is essential before buying security equipment. Find your risks, then patch the holes.

Take Stock of Your Stuff

Make a list of assets and their approximate value. A good inventory for insurance purposes can be made with a video camera or smart phone. Include vehicle and license plate numbers. Store a copy of records off site.

Keep records current so that if items go missing, they won’t go unnoticed. Case in point: missing cows are often not even missed. It happens to ranchers who don’t take regular counts. The Texas and Southwestern Cattle Raiser’s Association — a trade group whose rangers recover an average of $5 million in stolen cattle for ranchers each year — says tagging or tattooing livestock isn’t enough. Count them, regularly!

Experts say security comes in layers. It also comes in numbers. A farm watch program, like its urban counterparts, bundles security. The community effort joins rural neighbors, law enforcement and the combined technology of a network.

Farm, ranch and grove watch programs fight crime with extra eyes, security devices, signs and the Internet. Members post photos on Facebook and issue online alerts about stolen property or suspicious persons. The Sonoma County Sheriff’s website mentions some technologies used: email trees; Nixle, a database that tracks local crimes; and Raids Online, a downloadable crime-mapping service. Farmers learn to spot rural crime, which may involve illegal drugs and random clues like discarded cold medicine packages. As the murder of an Alabama farmer who confronted a thief in 2012 makes clear, crimes should be reported, not interrupted.

And if the local sheriff’s department doesn’t have a farm watch program, you can start one.

Since each grove or nursery is topographically unique, security problems vary by site.

According to Contreras, “Most groves cover a large area,” making them hard to protect. “Even with fences, lights and cameras, thieves gain access to groves and nurseries” and steal crops. One farmer told Contreras that all fences do is “tell me thieves have been in my grove.”

Since each grove or nursery is topographically unique, security problems vary by site. And some thefts are well-planned. In a recent heist, which was interrupted, she says, they left behind two-way radios, elaborate picking tools, bags, “and what seemed to be snacks and water for hours of theft.”

Contreras suggest security options such as cameras, painting fruit (using a non-toxic material often used to protect fruit from sunburn, which can’t be quickly removed by thieves), natural barriers around perimeters, requesting extra sheriff patrols in picking season and an informal version of grove watch. That is, being in touch with neighboring growers and reporting thefts and suspicious activity.

“The best thing about farmers is that they have a great network in place already,” Contreras says. But more assistance from sheriffs can be had if farmers ask. “Anyone who is interested in starting a farm watch can contact me,” she says.

One favored tool, often rolled into farm watch, is the owner applied number (OAN) program. This FBI-established system helps return stolen property using a unique 10-digit number, identifying the state, county and owner. The permanent number can be stamped on everything from tractors to tools. Equipment can be recovered from anywhere in the U.S.

The number also deters theft, notes the Sonoma County sheriff’s website. “It has been proven that thieves are hesitant to take items that can be readily identified.”

The San Luis Obispo Farm Bureau points out that, of the hundreds of pieces of equipment stolen recently, few had serial numbers.

Video surveillance systems include cameras, monitors and recorders. For best results, integrate them with detection devices like motion sensors that trigger an alarm and activate the video recorder.

San Luis Obispo Farm bureau recommends a 40-pixel or higher camera/video system for clear images. Most of these cameras and alarms can sync with a smart phone for activation on or off site. Install equipment in hidden places and in areas where break-ins are likely.

Sargent Patrick Shannon, with the rural crime unit, says they’ve had “some limited success” with the technology. Recently, they captured important vehicle data related to a repeat offender. The images weren’t clear enough to read a license plate, but provided other details. That thief hasn’t returned.

Silva, who prosecutes rural crimes, has scored other successes. An avocado thief’s face was recorded on infrared camera, with date and time stamp, on his fourth — and last — visit. The detective identified him from the photo and he confessed.

Locks: To cheat the bolt-cutter, weld a metal cover over the hasp to protect padlocks from being cut, suggests the San Luis Obispo Farm Bureau. Lock storage areas with padlocks, hasps and deadbolts. And don’t just have locks ”“- use them.

Gates: Fortify gate hinges that can be easily removed. Secure access roads with gates or cables stretched between posts cemented in the ground. Secure gates with chains and locks. Gates can also be topped, like Alcatraz, with strands of barbed wire.

As metal prices soar, copper wiring on pivot irrigation systems is a thief magnet. One antidote is the Pivot Alarm, a solar-powered irrigation alarm that monitors pivots to detect tampering.

A simpler fix is to replace brass with plastic on irrigation systems. Plastic pipes don’t work as well as metal ones, but plastic won’t work for metal-vultures, either.

farm crimes are increasing in my place.