One Woman Is Revolutionizing the Fur Industry. By Using Roadkill.

Paquin once fought resource misuse in another capacity, traveling the world as a global sustainability consultant. But after crisscrossing the world and living in Denmark for seven years, Paquin found herself a single parent unwilling to travel as frequently for work. And so she returned to the States and revisited a business idea that had […] 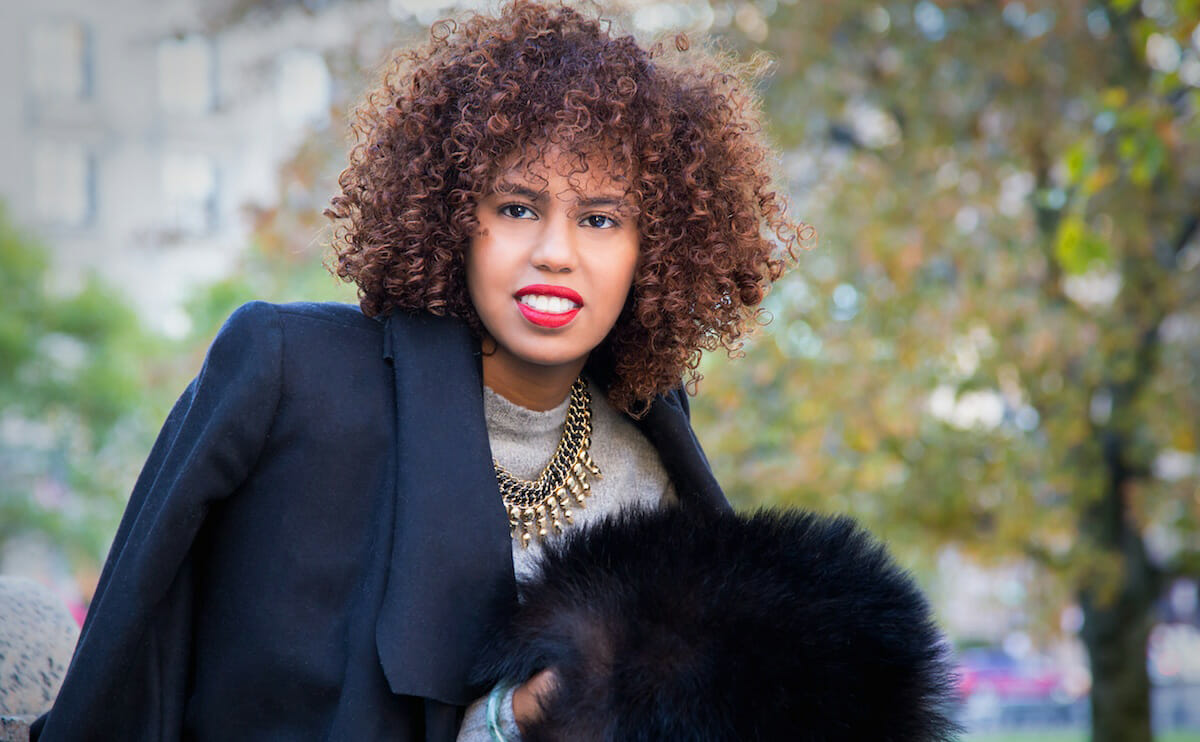 Paquin once fought resource misuse in another capacity, traveling the world as a global sustainability consultant. But after crisscrossing the world and living in Denmark for seven years, Paquin found herself a single parent unwilling to travel as frequently for work.

And so she returned to the States and revisited a business idea that had germinated for years: fur accessories made from the casualties of our roadways.

“It’s so much a part of everyday life to see these animals,” says Paquin. “Who of us doesn’t look away? You don’t want to see it because when you fully soak in the meaning of what happened, it’s emotionally draining.”

Paquin returned to the States and revisited a business idea that had germinated for years: fur accessories made from the casualties of our roadways.

So, how many animals do you think get killed on the streets of this country every year? Whatever your guesstimate, go higher: according to Culture Change, it’s approximately 1 million a day, or 365 million a year. By comparison, Born Free USA reports that approximately 50 million animals are killed every year for their fur. (As Culture Change puts it, “only meat-eaters take a larger toll than its motorists.”)

“The scale of it is so overwhelming — you can’t possibly wrap your head around and the suffering that went into those numbers,” says Paquin, an animal lover who grew up on a dairy farm, worked on organic farms as a young adult, and even owned two ferrets when she was in Denmark.

There may be a nascent movement towards reappropriating roadkill as ethical meat, but sustainable fur couture? Paquin was in uncharted territory. No matter: In short order she located a taxidermist in Vermont who schooled her in the nitty-gritty of skinning and — oof — scraping an animal pelt ahead of the tanning process. Her induction came in the form of a deceased raccoon: “We both had a shot of whiskey, I put some peppermint oil under my nose, and we found a branch in the woods to hang this thing from. It was super intense.”

After the prep work, Paquin ships her furs to a tannery in Idaho, one of the very few in the country that will work with partial pelts. As for what she does with the bodies afterwards, Paquin leans on her Native American heritage, taking them into the woods, placing them in fetal position, and then saying a prayer — “the giveaway prayer, a prayer of thanks. You’re thanking the animal spirit.”

Once the pieces come back from Idaho, the wait for a commission begins. Through sheer word of mouth, the customer drumbeat has been steady. Bespoke pieces have thus far included neck muffs, velvet-lined hand muffs, leg warmers, trapper hats, gauntlet gloves, and alpaca wool hats with fur pom-poms. Lest one fear the wrath of PETA, Paquin also sews a sterling silver badge to the outside of the piece, indicating it as a one of a kind, principled product: “People need to look at the fur and say okay, that’s Petite Mort, it’s an ethical fur.” All pieces are made to measure and start at $1000, save for the hats, which range from $380 to $500. (Men, FYI, are big fans of the leg warmers.)

“We both had a shot of whiskey, I put some peppermint oil under my nose, and we found a branch in the woods to hang this thing from. It was super intense.”

Though Paquin recovers many of her animals herself, the Wayland, Massachusetts, resident hardly lacks for collaborators. Hunters, wildlife officers, highway patrolmen, and other contacts get in touch when they’ve spotted a salvageable animal. Over the last year she’s recovered or received bears, fox, beaver, raccoons, otters, baby fawn, mink, and even a couple of fisher cats. (Paquin once received a coyote that had sat in a hunter’s freezer for months; it took three days to thaw.) All animals are registered with the Massachusetts Division of Fisheries and Wildlife, and customers receive details about the animal’s recovery as well as clues into the life it might have lived. “Each animal has a story,” she says. 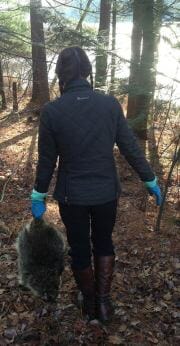 Paquin prepares to skin a raccoon.

As for the name of her collection, Petite Mort literally translates from the French as “the little death” and colloquially refers to a woman’s temporary state after an orgasm. Paquin appreciated the double meaning of the term vis a vis both the expired animals and the sumptuousness of her pieces: “That state that requires full body participation is where my I want my customer to be.”

Currently in search of investors to expand the enterprise, Paquin lives for the day when fur will be a widespread wearable material for the mindfulness set.

“Fur is a very sensual and luxurious product that has been shamed and shameful for a very very long time,” she says. “This is a shameless fur. This is champagne all night and no hangover.”

As for her shorter-term goals?

“Right now I’m just trying to sell roadkill to people,” she says with a laugh.