On Eating Roadkill, the Most Ethical Meat

The ins and outs of eating and cooking roadkill -- legally. 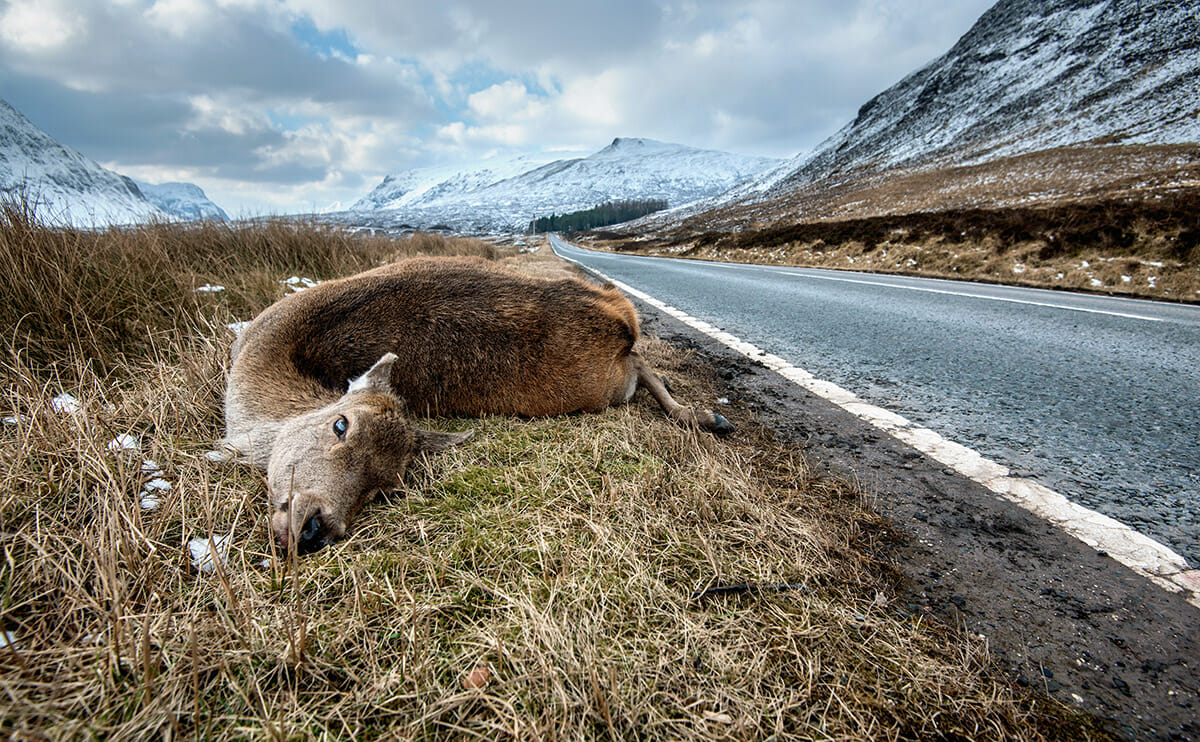 Not just us carnivores, either. It is the perfect meat for vegetarians and vegans, too, provided their objections to meat are its murder or its environmental implications and not because it’s icky-gross. The animal was not raised for meat, it was not killed for meat; it is just simply and accidentally meat – manna from minivans.

Practical, culinary and even legal considerations make it hard for many to imagine cooking our vehicular accidents, but that needn’t be the case. If the roadkill is fresh, perhaps hit on a cold day and ideally a large animal, it is as safe as any game. Plus, not eating roadkill is intensely wasteful: last year, State Farm Mutual Automobile Insurance Company estimated that some 1,232,000 deer were hit by cars in the United States. Now imagine that only a third of that meat could be salvaged. That’d be about 20 million pounds of free-range venison, perhaps not much compared to the 23 billion pounds of beef produced in the U.S. in 2011 but significant..

(Nota bene: Deer are the important edible roadkill category for two reasons: money and physics. Insurance companies keep statistics on roadkill deer because hitting a deer messes up a car in a way a jackrabbit can’t – State Farm estimates the average cost of collision with a deer is just over $3,300. The reporting of all other roadkill is sporadic and anecdotal. But what you really care about is that deer are large animals and more likely to remain edible. Their height means they’re unlikely to be mashed under a car but thrown over or around it. Their mass means their guts are less likely to rupture and contaminate the surrounding meat. That’s not to say there’s never an edible Thumper or Flower lying by the roadside, but the star attraction remains Bambi.)

If the roadkill is fresh, perhaps hit on a cold day and ideally a large animal, it is as safe as any game.

Roadkill arrived with the age of the automobile. The first study of roadkill was probably published by New England naturalist James Raymond Simmons, author of 1938’s “Feathers and Fur on the Turnpike” – a rare book, for knowledge of which we are grateful to Roger Knutson’s more recent work, “Flattened Fauna.” While little hard data exists in the critically understudied field of eating roadkill, it’s probably safe to say people have been eating it as long as its been around. Wisconsin, for instance, started issuing roadkill salvage tags for deer in the 1950s and there was already a demand. Culturally, roadkill foraging is largely a rural practice, because that’s where you find farmers and hunters accustomed to butchering animals, and that’s where you find more animals – animals that haven’t been hit multiple times and animals that aren’t either pets or sewer-dwelling vermin.

A Whole Festival for Roadkill

For those new to eating roadkill, the best advice (other than trusting your eyes and nose) can be found in wild game cookbooks. Avoid roadkill-specific cookbooks, which tend to be jokey, like, you might be a redneck if you own this book.

The legal ramifications of eating roadkill are a bit dicey, though. In West Virginia, the roadkill must simply be reported to the state within 12 hours of its collection. Tennessee considered a similar law, but withdrew it under ridicule. In Massachusetts, you must obtain a permit after the fact and submit your roadkill to inspection by the state. In Illinois, the chain of title is somewhat complicated and no one delinquent in child support may claim a dead deer. Alaska practices roadside socialism: all roadkill belongs to the state, which then feeds it to human families in need.

On the other hand, Texas, California and Washington may not agree on much, but they are three of the very few states that agree that possession of roadkill is illegal. Apparently, they worry it will lead to poaching.

Carrie Wilson, a marine biologist with California’s Department of Fish and Wildlife who writes a question and answer column for the state agency said she’s had to address the topic of roadkill a couple of times. She tells readers that even if they have a hunting license, smacking a deer with a Volvo does not constitute a legal method of taking game.

Now, I’ve been a passenger in a car that hit a deer. The deer bounded off in who knows what condition and the car limped home with shaken passengers and several hundred dollars worth of damage. It is not an experience I would repeat on purpose. I asked Wilson if she thought there was anyone out there who would try to run a deer down for meat.

“There are people who will do it, unfortunately,” she said. 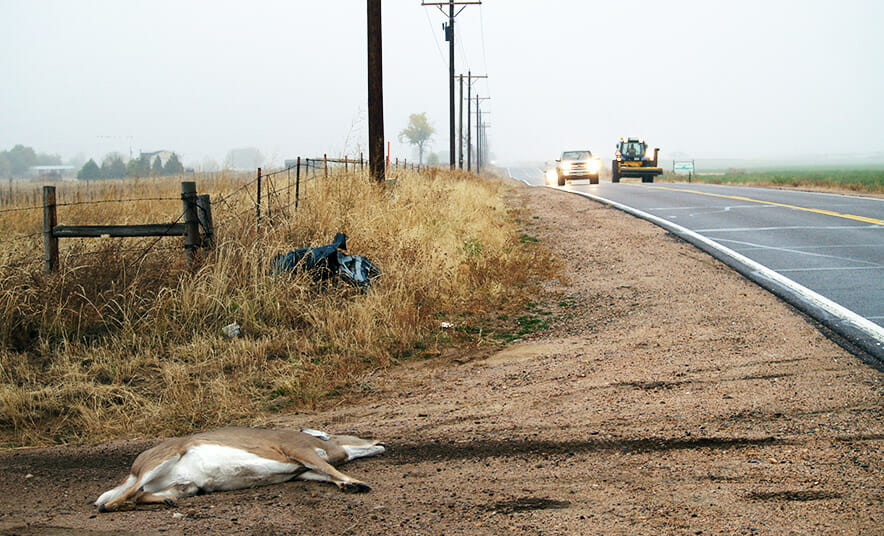 Facts don’t really back up that fear, though. In Wisconsin, a state that has issued salvage tags since the ’50s, officials say poaching is not an issue. Scott Roepke, an assistant big game ecologist with the state’s Department of Natural Resources, notes the state issued 4,400 roadkill deer salvage tags in 2011 – up about 1,000 from the previous three years’ totals, but nowhere near the almost 14,000 deer salvaged in 1998.

It’s worth noting here that in the woodsy states of the Northeast, the states with the most deer and the most deer dead alongside the road – Pennsylvania, Michigan, New York, Ohio and Wisconsin – it’s legal to collect and eat roadkill deer.

‘We definitely wouldn’t want to encourage people to try and run down a deer with their trucks and take it home for meat.’

The most recent state to legalize roadkill collection is Montana, with a bill introduced by Republican Representative Steve Lavin, a highway patrol sergeant in northwest Montana, near Glacier National Park. At first, Lavin says he laughed off the suggestion of one of his troopers that the meat be legalized, but the more he thought about it, the more it made sense. There is a lot of roadkill in the area; some of its getting eaten, even taken to food banks. “What’s happening is people are taking them already – essentially what this will do is legalize the process,” he says.

Lavin’s law will allow any peace officer to issue a permit for the salvage of roadkill antelope, deer, elk, or moose. (Bears, bighorn sheep and other animals with valuable body parts are intentionally excluded from the statute, Lavin said.)

There are times, of course, when roadkill is not collected for human culinary purposes. In Wisconsin, and other states worried about the spread of a deer pathogen known as Chronic Wasting Disease, the deer are collected by contractors and hauled to nearby landfills. It’s a patchwork system in California, Carrie Wilson said. If the state roads agency finds the animals, they tend to drag the carcasses off into the bushes for non-human scavengers. Some cities either have their own animal control agencies or hire animal shelters to collect carcasses. The carcasses are then either fed to rescued carnivores or taken to a rendering plant, from which they eventually exit as ingredients for pet food, glue, soap, pharmaceuticals and gelatin.

So for those on the fence (or outright repelled) but the concept, consider this: because gelatin ends up in everything from marshmallows to gummy bears to ice cream, there’s a good chance that you’ve already consumed, legally, some accidental meat.

Talking to a Roadkill Aficionado

Want to know who actually eats the stuff? So did we, so we called up Jonathan McGowan, a British taxidermist, naturalist, cryptozoologist, UFO-spotter and roadkill-eating enthusiast.

Is it legal? There are no laws regarding collecting roadkill (in the UK) except, the owner of the road can prevent one from taking it if he wishes and take claim to any roadkill animals.

What have you taken to eat? I take most animals except the majority of dead badgers, as I have too many of them and they are so commonly killed on roads. Rats,moles, mice, shrews, weasels, stoats, polecats, martens, otters, wild cats, fox, boar, all deer species, all bird species, too many to mention, especially birds of prey.

What do you avoid? Any small animals except moles, hedgehogs and shrews. I do not eat [small animals] because they taste horrid, but are still edible.

How do you check the condition of the meat? I do not need to check condition of meat, one can tell at glance.

Are you sure? If an animal is bloated it is still okay generally. Depending on temperature, there still maybe parts of any large animal that are usable. Even rabbits when bloated are okay if they are quickly skinned and the flesh is removed.

Do you know others who eat roadkill? I only know a few people who collect roadkill rabbits and pheasant and one or two people know how to handle deer, but nobody does it like me or collects the other animals that I do.

Do you have a favorite animal? I love young fox, deer and pheasant and partridge and ducks. Other animals such as sea birds i love but only find them on beaches.

Do you have a favorite way to prepare roadkill? I have no favorite recipes as all meat is very versatile, but I love anything in a stir-fry, spaghetti bolognese, or roast venison or duck.

If someone would sell this where it’s easily available, I’d definitely purchase it. I love animals and am vegan and wanting to start an animal sanctuary/rescue-i could definitely feel good about taking more animals if this was for purchase-it could easily be marketed towards pet food consumers so a business idea for someone who has a strong stomach!

0
Reply
Hot Off The Grille: Is California Ready To Legalize Roadkill Cuisine?