Unripe Grapes Are Good For Something - Modern Farmer
Food & Drink

Unripe Grapes Are Good For Something

Want to add a gentle acidity to savory and sweet dishes? You might consider using the juice of green, unripe grapes. 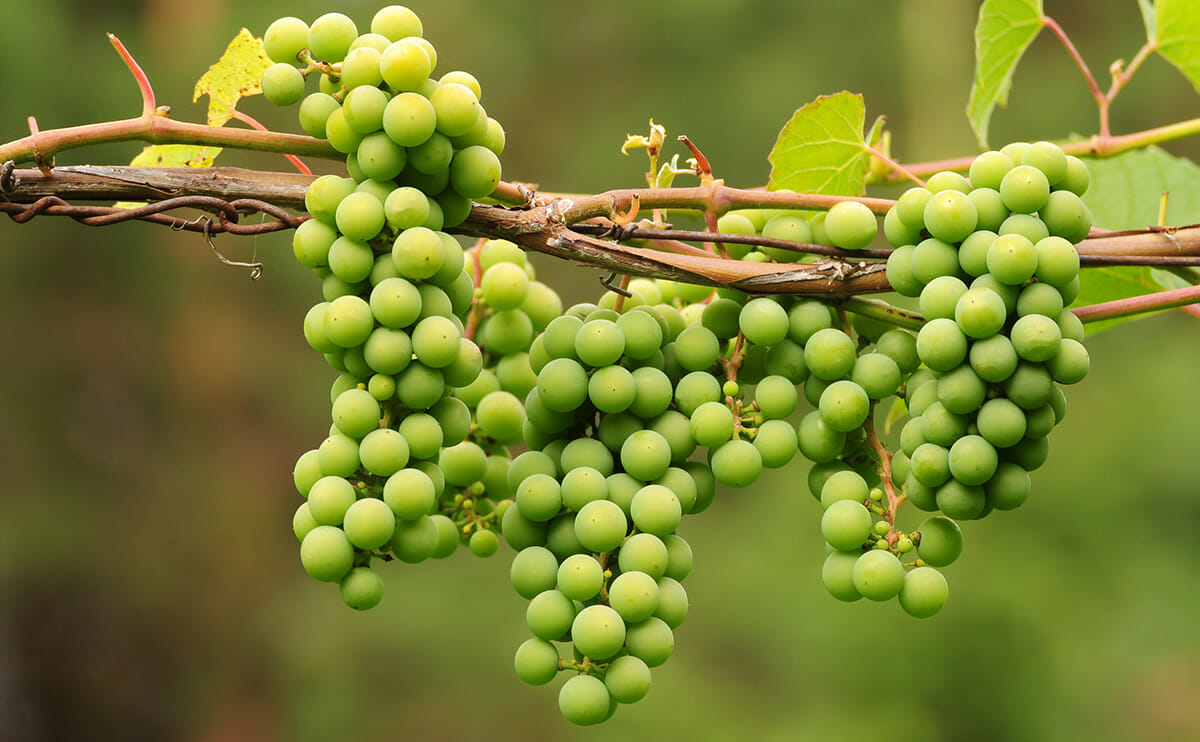 Also spelled verjus, the name comes from the French words for green (vert) and juice (jus), and that’s pretty much what it is: the unfermented juice of green, unripe grapes that can add gentle acidity to savory and sweet dishes. There is written evidence of its use as far back as 71 AD, at the height of the Roman Empire, when the juice was known as acresta. It seems to have peaked again in medieval French cuisine, sometimes in the form of crabapple or green plum juice, only to be edged out by the rise and distribution of cultivated lemons. Traditional Dijon mustard still gets its gently acidic bite from verjus, and European chefs have remained conversant with its use.

As wine grapes mature through a growing season, some vineyard managers and workers will watch for the grapes’ skin color to just begin to turn from green to red, a point of development known as veraison. At first evidence of veraison, they’ll harvest a certain percentage of the unripe grape clusters to allow better light penetration and air circulation, manage the energy demand on the vine and calibrate the expected grape yield. Some leave the barely-ripe green grapes on the ground, or perhaps move them to a compost pile. But a few will gather these grapes to extract and bottle the highly acidic juice.

Roman Roth, partner and winemaker at WÁ¶lffer Estate Vineyard in Sagaponack, New York, on the East End of Long Island, has been making verjus since 1994 (when the winery was still known as Sagpond Vineyards). In the name of research, he first sampled the would-be competition from France and California. “The French one tasted like canned vegetables and the one from California tasted like acid water. I figured whatever I made couldn’t taste any worse,” he says. In the first year, he made three cases of verjus, using Chardonnay grapes; before the 2014 wine grape harvest, the estate bottled about 700 cases, made from a mixture of Merlot and Cabernet Franc grapes.

“We pick the grapes very early, to catch that balance, where it’s a little sweet, with no volatile acidity,”Roth explains. “Then we chill it down and cold stabilize it to protect it from fermenting. After two weeks, we filter it into sterilized bottles.” He says that the flavor and aroma of Wolffer’s verjus is reminiscent of New Zealand Sauvignon Blanc – which is to say, grassy, herbal, citrusy – and it’s a quality he says would be lost if he chose to pasteurize the liquid (though he does add a bit of sulfur to prevent oxidation).

Tina and Eric Hazlitt of Sawmill Creek Vineyards in Hector, New York, grow grapes for about 25 wineries in the Finger Lakes region. They have been making verjus since 2009, using Cabernet Franc grapes. She describes their product Verjooz as having a tart green apple flavor, but uses the phrase “lime of the vine” to market the product and to highlight its sustainability for chefs in temperate climates looking to limit their carbon footprint.

“Citrus fruits are shipped in from halfway around the world, and have a huge carbon footprint,” says Hazlitt. “Verjus is the next best thing, and if you’re in or near wine country, it’s a local, sustainable product.” Hazlitt uses verjus to dress salads and lightly “cook” the raw seafood in a ceviche, as well as in the recipe below.

“The cool thing about verjus is that, unlike vinegar, it plays well with wine,”

The local aspect is what has led Charlie Marshall, owner of The Marshal Restaurant in New York City, to keep his kitchen stocked with verjus from both WÁ¶lffer and Sawmill Creek. His menu and wine list reflect a serious commitment to a local farm-to-table ethos, and he’s used New York State verjus to replace the lemon juice once used for vinaigrettes, aiolis and other sauces; his bartenders are experimenting with verjus as a non-citrus way to add piquancy to cocktails. Roth notes that his 10-year old daughter will drink a glass of verjus while the adults enjoy wine, and Marshall says that it makes a fine mixer with club soda for teetotalers.

“The cool thing about verjus is that, unlike vinegar, it plays well with wine,” says Hank Shaw, author of Hunt, Gather, Cook: Finding the Forgotten Feast, who makes his own verjus at home in Sacramento, California, from the grapes he grows to make wine. He attributes verjus’ wine-friendliness to its malic and tartaric acid, which are less harsh than the acetic acid that characterizes vinegar. “As a chef, if you’re trying to pair dishes with wines, you can brighten up the flavor of a dish with verjus without destroying your diners’ palates.” Shaw expresses some surprise that more California winemakers aren’t making verjus, but given the relatively small amount of juice that one can extract from an unripe grape, and the toil involved in its production relative to the average retail price, “It’s safe to say that anyone making verjus is doing it as a labor of love.”

Preheat the oven to 325 F. Butter and flour an 8×8-inch glass baking dish.

In a small bowl, combine the flour, thyme and salt.

Using a stand mixer, beat together the butter and powdered sugar (and grapeseed oil, if using) until light and fluffy. Beat in the verjus and vanilla. Reduce the spped to low and slowly add the flour mixture.

Using damp fingers, press the mixture into the prepared pan. Bake 30 minutes, then let cool 30 minutes before slicing into squares.