The alpaca industry matures, but not without growing pains. 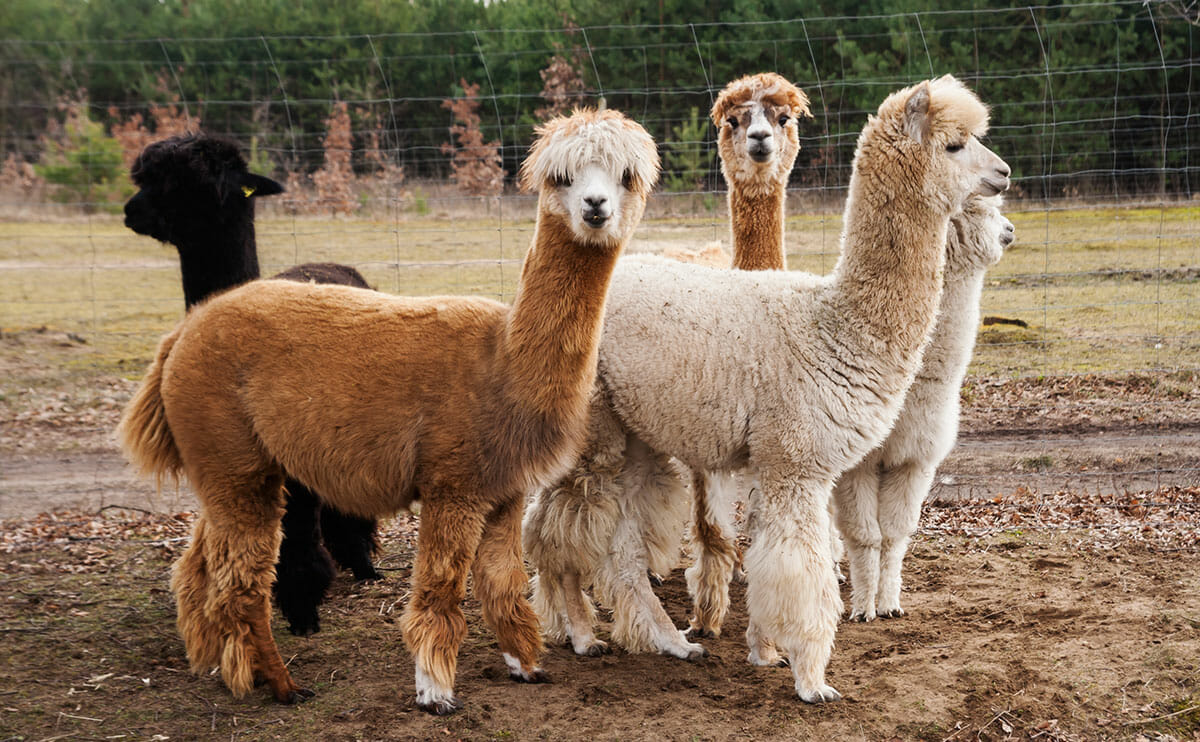 The offer was 90 percent off the animals’ original purchase price, the owners claimed. Males could be had for just $200 a head.

But the deep discounts, advertised month after month on Facebook, Twitter and the website of Jocelyn’s Alpaca Ranch, didn’t raise enough cash to save the farm – or its alpacas.

Last winter, the Polk County Sheriff’s Department raided the 21-acre ranch, located in the rolling foothills of Oregon’s Coastal Range. There, deputies found 16 dead animals and evacuated about 175 more. Many were so skeletal that their backbones stuck out from their once-fluffy backs.

‘The biggest marketing pushes were calling them a huggable investment and attracting people who just thought they were gorgeous little lawn ornaments.’

It was a grisly scene, which made for a dramatic newspaper copy. Owners Robert and Jocelyn Silver were charged with multiple counts of animal neglect (Jocelyn pled guilty to felony neglect charges this summer and received three years probation; her husband is scheduled for a pretrial hearing later this fall).

Robert claimed he and his wife had sunk their life savings – some $750,000 – into their breeding operation over the past decade. But the animals, he said, never brought close to the hoped-for returns.

Some in the world of alpaca breeding see the neglect and financial ruin at Jocelyn’s Alpaca Ranch as an extreme case. But others, including farmers involved in a growing number of alpaca rescue efforts in the United States and Canada, recognize familiar themes.

They view such cases as emblematic of an industry that expanded too quickly in North America, marketed itself too slickly during the boom years of the early 2000s, and emphasized breeding over developing a viable market for the animal’s chief product – their fleece.

“The biggest marketing pushes were calling them a huggable investment and attracting people who just thought they were gorgeous little lawn ornaments,” says Wren Owens, an alpaca farmer in western New York State who also brokers sales of the animals. “We got people who weren’t really animal people, who weren’t really farmers, or even business people.”

Such individuals were not acquainted with the tough realities of raising animals for a living.

“They just thought ‘We’ll be able to hang out at home and retire, and people will knock on our doors and pay us all these thousands of dollars and this will be easy.’

The result, economists analyzing the alpaca market have concluded, was the latest in a long line of speculative livestock bubbles which have included many exotic animals: emus, Berkshire hogs, Boer goats, ostriches, even alpacas’ South American cousin, the llama.

Now, almost a decade after prices for alpacas began to decline, many alpaca farmers are still leaving the business ”“ or trying to – before their own situation becomes as dire as the Silvers’.

On sites like Openherd, and even Craigslist, owners routinely advertise “herd liquidation” and “going out of business” sales, offering alpacas in radically discounted packages. Some owners have found they can’t give the animals away for free.

“The recession has caused a lot of problems and a lot of desperation,” says Owens, who is starting a formal rescue nonprofit. “People are quietly putting them in their freezers if they can’t get the hay and water. They feel it’s more humane that way. It’s a really, really heart-wrenching reality.”

Alpaca rescue organizations, which have proliferated in recent years, urge overwhelmed owners to surrender their animals before the situation grows dire.

Selling alpacas for meat, though common practice in South America, where the animals originated, is attracting interest, though it remains a last-resort option for many alpaca owners. A few years back, Owens took in a herd of 30 alpacas to save them from being sold to a dog food manufacturer.

Alpaca rescue organizations, which have proliferated in recent years, urge overwhelmed owners to surrender their animals before the situation grows dire. But the groups, typically run by concerned volunteers, also struggle mightily to find homes for neglected and abandoned animals. (It took Owens a year to find new homes for the herd she took in; the rescue group handling the Silvers’ herd spent six months finding homes for all the animals.)

Many rescues occur informally and without the kind of media attention Jocelyn’s Alpaca Ranch and the Silvers received, not to mention celebrity donations like the one Viggo Mortensen reportedly made to a Hudson Valley farm that had rescued some 70 severely neglected alpacas.

The surplus of unwanted animals has made alpaca farmers of people like Jodi Orton, a 30-year veteran of animal rescue in western Missouri. Last fall, Orton heard about a breeding ranch to the north where the alpacas were languishing when a recently widowed man couldn’t ”“ or wouldn’t ”“ spend the time or money to tend to them adequately after his wife’s death.

At the time, Missouri lacked an organized alpaca rescue group, so Orton and five other volunteers participated in an intervention that stretched out over several months. Finally, on a January day when temperatures dipped well below zero, they herded more than 200 starving and diseased alpacas into a hilltop barn for shots, before cramming them into trailers and then picking their way down a perilously steep and icy road.

Orton ended up with a herd of about 60 animals, which she, her husband, and 10 foster and adopted children nursed back to health. “Since then,” she says “we haven’t lost a single alpaca.” The family has built a mini fiber processing mill in their basement, and Orton, expecting many more alpacas in need of help, has formed an alpaca rescue group.

They herded more than 200 starving and diseased alpacas into a hilltop barn for shots, before cramming them into trailers and then picking their way down a perilously steep and icy road.

Criminal neglect charges, frantic rescues, liquidation sales, firesale online auctions – all this is a far cry from the genteel, low-stress life depicted a decade ago in a series of TV ads run by the Alpaca Owners and Breeders Association, the industry’s chief trade group.

Those spots, part of an extensive marketing campaign, touted alpacas as solid investments – a perfect “phased retirement opportunity” for empty nesters, especially urbanites seeking an escape from the corporate rat race. For those with minimal or no farming experience, the ads offered a free 300-plus-page guide with information about starting an alpaca farm and caring for the animals.

The alpaca industry’s major trade group, now called the Alpaca Owners Association, says its strategy all along was to encourage strategic breeding that would increase the North American alpaca population while producing animals with superior fleece.

If the ads lured in naÁ¯ve people with unrealistic expectations about alpaca farming, that’s not the ads’ fault, says Scott Miller, a longtime owners association board member.

“I think the marketing was appropriate,” he says. “I would always ask somebody that’s not very satisfied, ‘How much energy did you put into it?’ When I talk to somebody, I tell them, ‘This is a business, and if you’re not prepared to show up and work every day on your business, why in the world would you think it would be successful?’”

In the days before enchanting alpaca GIFs made the rounds, the animals made cameos on “The Martha Stewart Show,” “The View,” and “The Today Show.” Viewers cooed over the animals’ coats – fuzzy or silky depending on the breed – their big, long-lashed eyes, and graceful legs.

The Silvers, of Jocelyn’s Alpaca Ranch in Oregon, reflected some of the boomtime naiveté themselves – or perhaps just tried to capitalize on the wild ambitions of prospective buyers – in ads that ran online before the county seized their animals.

“Turn $35,000 to $1,000,000 in ten years by breeding Alpacas, and experience the most enjoyable business one can have,” one Yellow Pages ad proclaimed cheerily. “It’s fun for the entire family. Your new friends will make you immensely wealthy and you will create the greatest time of your life.”

Since the Silvers’ herd was seized last year, the Alpaca Owners Association has worked to discourage such get-rich-quick dreams. The organization’s website still touts the “peace of mind” and tax advantages that come with investing in alpacas. But a long press release released after the Oregon rescue subtly revised some of the themes in its pre-Recession TV ad campaign, which had depicted retirees gazing out at their herds over their morning coffee.

“While many alpaca business owners do, indeed, enjoy their morning cup of coffee while watching their herd in the field,” the release noted, “Just like any livestock owner, alpaca owners put a lot of labor into their business.”

The Silvers started their operation around 2005 or 2006 – just as the alpaca market peaked, it appears. Prices for both male and female alpacas rose dramatically in the early part of the 2000s through 2005, with mean prices hovering around $30,000, a UC-Davis analysis found. By 2011, though, the auction prices had plunged 80 percent for males, and more than 70 percent for females.

The UC-Davis assessment, which considered major auctions, likely reflected the higher end of the market. By 2012, despite ongoing favorable media coverage, the average alpaca was selling for $2200, according to the USDA’s farm census.

“While many alpaca business owners do, indeed, enjoy their morning cup of coffee while watching their herd in the field, just like any livestock owner, alpaca owners put a lot of labor into their business.”

The problem, both analysts and some farmers believe, was the focus on breeding at the expense of developing a market and an infrastructure to process and sell alpacas’ chief product: their fleece.

“People used to breed to the most famous male of the year” ”“ the one that won the top show ribbons, says Jan Heinrich, who owns an alpaca breeding operation in northern Tennessee with her husband.

“When the economy tanked, people found that a blue ribbon hanging up doesn’t pay the bills,” says Heinrich, who also owns a specialty fiber mill that processes raw alpaca fleece from all over the country.

“What does pay the bills? Fiber. And so breeding is still very important still. But I see the trend to breeding smart, breeding for better fiber, breeding for more fiber.”

But whereas North American alpaca breeders get the protection of severe import restrictions on live animals, the wool faces global competition, notably from herds of several million animals in South America.

For years, even though the alpaca owners association extolled the superiority of alpaca fiber, many North American alpaca farmers simply dumped their shorn fleece, deeming it not worth the trouble and expense of cleaning and processing in a small, specialty mill. In 2006, the UC-Davis economists analyzed alpaca wool prices and concluded they’d have to rise substantially ”“ more than 20 percent a year – to justify the animals’ high purchase prices.

Now that prices for alpacas themselves have plummeted, though, it may be easier to turn a profit off their fleece. Groups like the Alpaca Fiber Cooperative of North America work to make it cheaper and easier for farmers to get their raw fleece processed and turned into yarn and woolen products, while boosters run courses, write guides, and speak at conferences about raising alpacas for their fleece.