Food Fight: Don’t Count on Synthetic Meat to Save the Planet

Part of a two story debate about synthetic meat. 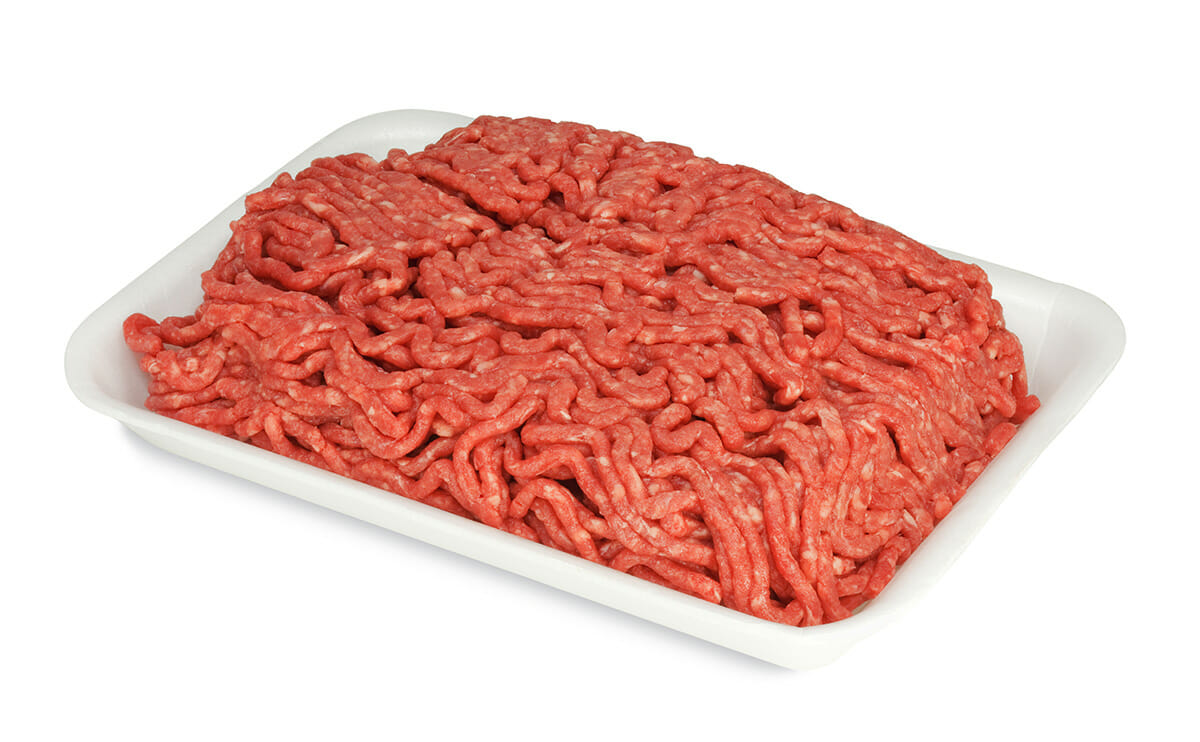 A Chinese friend invited me to lunch last week. Her mother, visiting for a few months, served us each a bowl of rice, and we all sat together picking bites out of the communal dishes crowded on the table: broccoli; cucumbers with sweet vinegar and garlic; and a stir-fry of sliced mushrooms and pork ribs.

The ribs, cut into bite-sized rings with a small round bone in the center, were typical of Chinese meat dishes. Put the whole piece of meat in your mouth, chew off the fleshy bits, and spit out the inedible bone. As we ate, my friend remarked on the lack of bones in American meat dishes, worried that I wouldn’t like the ribs.

I did; but I don’t always like the way China does meat. During the many months I’ve spent there, I’ve tried to enjoy dozens of unfamiliar meaty morsels, some more successfully (sliced pig lungs, chicken brains) than others (chicken eyes, hedgehog, dog).

All of which is a long-winded way of saying that the latest meat sensation – cultured meat, created with cells in a lab – is joining a broad and diverse marketplace for meat around the globe. In order to win a place on the plates of consumers, whether in Chicago or Chongqing, it will have to offer some clear benefit to its target customers.

But what are those benefits?

We the Wary People

So far, it’s not entirely clear to me, or to some of the world’s biggest meat consumers: Americans.

A Pew Research Center survey found that 80 percent of Americans aren’t enthusiastic about the prospect of eating lab-grown meat. Interestingly, the study also found that an equal number believe that we’ll be able to grow custom organs in a lab for patients needing a transplant. It’s the same scientists who work on both. It’s not that we’re uncomfortable with lab-grown tissue, or even with putting it in our bodies – we just don’t want to put it in our mouths.

Why not is a complex problem, and changing what we’re willing to eat isn’t an easy proposition. Cultural, religious and social taboos make it a significant battle. This point was acknowledged by every single person I spoke with on the topic, no matter which side of the debate they were on. Mark Post, who leads a research project called Cultured Beef at Maastricht University in The Netherlands and has become the technology’s most prominent public supporter, named two hurdles that could spell failure for cultured meat: lack of funding and, as he put it, “how you deal with consumer acceptance.” Last year, Post presented the first lab-produced burger to the public, with much media fanfare.

Michael Hansen, a scientist who works on food safety and technology issues for Consumer’s Union, has been a vocal critic of lab-grown meat. In his view, cultured meat, no matter how you slice it, is out of step with many current food trends, which emphasize health and authenticity. “The whole food system is going in the opposite direction,” he says.

While changing consumer opinion is certainly possible – intensive marketing efforts from early companies and greater public familiarity with the technology could likely drive up demand in the years ahead – consumer acceptance is only one piece of the puzzle.

When we talk about the environmental benefits of lab-grown meat, we are by and large, talking about the benefits of eliminating factory-farmed beef from our global diet. Have a look at the data in the only environment impact study done on cultured meat to date, and you’ll immediately notice that the worst offender in terms of energy use, land use, water consumption, and greenhouse gas emissions is the cow.

The majority of cultured meat’s environmental claims are based on analysis from 2011, produced by Hanna L. Tuomisto and M. Joost Teixeira de Mattos, researchers from University of Oxford and the University of Amsterdam, respectively.

The peer-reviewed study, available here, was funded by New Harvest, a nonprofit that advocates for cultured meat and other meat alternatives. But that’s not my issue with the study; the bigger problem I see is that one set of data – the meat-from-animals data – is based on real-world systems, while the other – the meat-from-a-lab data – is based on a theoretical, highly optimized model of how in vitro meat might be produced.

One tissue-engineering researcher I spoke with scoffed at claims that cell culture techniques could deliver an edible hamburger for a reasonable cost, with a lower environmental footprint, than a cow.

“If you ask anyone who has actually worked in a lab,” he says, “who has seen how cells are grown in a lab and how artificial tissue is made, the amount of energy and resources that go into it – they’ll tell you, it’s never going to happen.”

Post, the scientist whose cultured cells went into the celebrity burger, disagreed, but he acknowledged that there are still unanswered questions about the production process. The largest one is this: What will we feed animal tissue cells, cultured in a lab?

That hasn’t been figured out yet. The 2011 study assumes that the cultured cells would be fed using cyanobacteria. To date, there are no published studies indicating that this is possible. Of the researchers I spoke with, Post was the most optimistic, and even he admitted that it hasn’t been done yet, and that “we can’t be 100 percent sure that cells, in culture, can be more efficient than a cow. That is something that needs to be proven.”

For now, Post and others in the industry feed their burgers fetal bovine serum, which currently is produced from blood collected in slaughterhouses and processed in a lab. Footprint analysis hasn’t been done on that method, but even the scientists involved say they don’t think the numbers would look good – and it’s not a sustainable, animal-free solution in the long run.

As Mary Catherine O’Connor has clearly explained, animal agriculture today has a significant impact on the environment. Reducing greenhouse gas emissions, water pollution, and energy use from meat production and consumption is an urgent issue. But, from my perspective, it seems there are more direct ways of achieving that goal than introducing a highly technical substitute for the product.

Reducing demand, rather than increasing the efficiency of the supply is, for example, one alternative. Before rolling your eyes, consider that global meat consumption trends aren’t as aggressively upward as they once were. 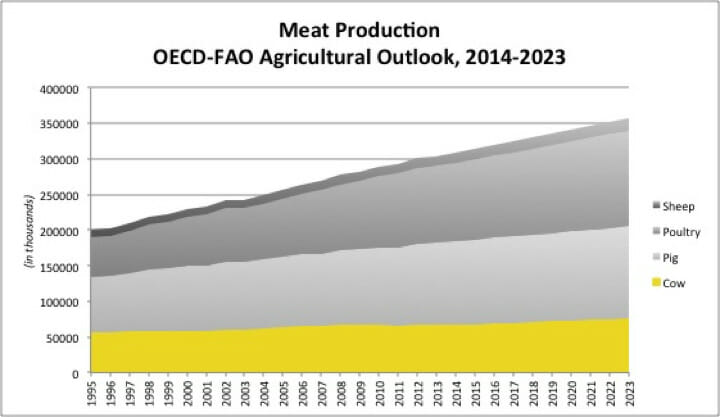 Global demand for meat has, yes, been climbing in the developing world. But in the developed world, meat consumption has started to falter. The OECD now projects that global demand for meat won’t rise as quickly as it has in the past. And “flexitarian” diets – which take meat out of the starring role in meal planning – are starting to take hold in developed countries around the world.

Beef has been one of the first to go. Production, overall, is still projected to grow, but not at the same rate as the overall meat market. Driven by rising prices (linked to feed and fuel), consumer concerns about the health impacts of red meat consumption, and a changing consumer palate, total U.S. beef consumption has been making a slow, steady decline for decades. Argentina, once the global capital of beef consumption, has started to turn away from its obsession with steak, too. And China, despite its booming meat market, hasn’t adopted beef at nearly the same pace as it has chicken and pork.

Even under the 2011 study’s ideal conditions, the advantages of cultured cells over whole-animal meat are significantly less dramatic for non-cow sources. Chicken even appears to have an advantage over lab-grown meat on the energy front, and poultry is the most popular meat around the world. It surpassed beef as American’s No. 1 meat choice in the past decade, and the FAO expects chicken to make up 72 percent of the increase in meat consumption, globally, by 2023.

When you take into account the many unknowns in the study, the marginal advantages of lab-grown meats could pale substantially – especially compared with, well, eating fewer animal products.

I found it odd, and sort of sad, that many of the lab-grown meat advocates I spoke with for this story are, themselves, vegans or vegetarians. It’s not that they’re hoping to re-integrate meat in their own diet. They’re just trying to find a way to get the rest of us meat addicts to stop killing animals or heating up the atmosphere.

I think they’re giving up on behavior change too soon and, ironically, pinning their hopes on what might be an even bigger cultural and philosophical leap than just eating less meat: getting eaters to embrace a factory-made, heavily processed food product that’s out of step with food trends.

We’ve only recently started to see the shift away from meat in rich countries’ diets, but it seems likely to continue. Aligning our innovation and marketing efforts with that trend, to drive more moderate consumption seems, to me, a more realistic and accessible path toward sustainability.

Read the other side of the argument here.