In partnership with Climate Confidential, here is part one of a two-sided debate about synthetic meat. 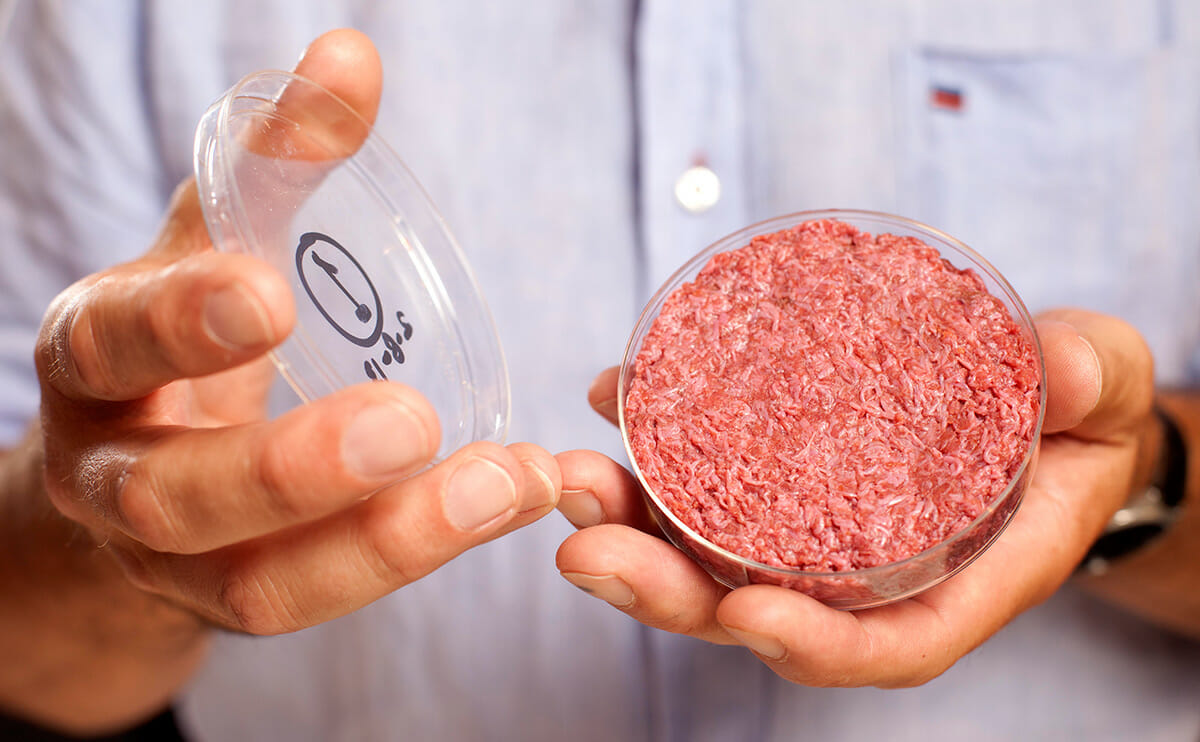 Damn you, hamburger. You leveraged so many early 20th-century trends ”“ swelling herds of cattle munching westward across the United States, burgeoning networks of refrigerated transport, growing urban centers ”“ to become a quick, cheap, filling meal that fueled the American Dream.

In 1961, the U.S. produced 8.6 billion pounds of beef. By 2002, it upped production to 27 billion pounds, increasing land, water and fertilizer usage ”“ as well as emissions ”“ along the way. Today, the meat industry produces 14.5 percent of global greenhouse gas emissions, according to the Food and Agriculture Organization (FAO). Figures for water consumption are perhaps even more startling. It takes anywhere from 4,000 to 18,000 gallons of water to produce a single 1/3-pound burger, according to the United States Geological Survey. And there are even more reasons the current scale of global meat production is completely unsustainable: By 2050, the human population is expected to be 132 percent larger than it was in 2010, and with that growth the FAO expects demand for beef to grow 121 percent. Demand for chicken and pork will also grow apace, but as ruminants, cattle are more strongly linked to agriculture’s main contribution to greenhouse gas emissions: methane.

A vision for the Hamburger 2.0, one made of cultured meat ”“ that is, meat grown in bioreactors rather than harvested from dead animals ”“ holds promise as a technological solution to these problems. There are some major hurdles to clear before cultured meat becomes commercially viable, but there is reason to believe that these hurdles can be overcome to produce cultured meat at scale and with significantly less environmental harm than its conventional counterpart.

Mark Post has become the poster boy of cultured meat because he leads a research project ”“ Cultured Beef, at Maastricht University in The Netherlands ”“ that presented the world’s first “lab burger” to a panel of food tasters last year. Post’s lab was able to produce the proof-of-concept burger thanks to a $320,000 grant from Google co-founder Sergey Brin. In addition to running the Cultured Beef project, Post is chair of physiology and vice dean of biomedical technology at the university.

Step one in making that burger was a biopsy taken from a live cow. Muscle stem cells from that sample were extracted and multiplied, in a small bioreactor, using a medium of fetal calf blood serum. “These cells are exercise junkies,” said Post at a recent talk he gave in San Francisco. “They are programed to contract… and this grows a muscle tissue. In three weeks, you take 40 billion of these muscle fibers, put them in a patty and you have a hamburger.”

It’s not rocket science. In fact, you could do it ”“ with careful controls of the cell growth process ”“ in your own kitchen. Today, cultured meat is also not even close to a viable replacement for conventional meat.

“Cell culture has been around for a century for medical purposes, it’s amazing that during that time no one has focused on efficiency,” Post told me. Indeed, but the medical community has never endeavored to feed burgers to billions. So a major task ahead, both for Post’s project and for commercial efforts, such as those of Modern Meadow, a New York City-based startup seeking to use 3D printing technology to produce meat tissue both for consumption and for leather manufacturing, will be to create high-output bioreactors with as little input of natural resources as possible.

A 2011 peer-reviewed study out of the University of Oxford estimated that compared to conventional meat, cultured meat could require up to 45 percent less energy, create nearly 100 percent fewer greenhouse gas emissions, and reduce water usage by up to 96 percent, based on a life-cycle-analysis assessment. “Could” is the operative word here, and the study made a number of assumptions that have been roundly criticized for painting too rosy a picture of cultured meats’ footprint.

It also assumed that the fetal calf blood serum now used to grow the cells would be replaced by cyanobacteria hydrolysate, made from algae bacteria. Though some scientists ”“ especially those also developing algal fuels ”“ are bullish on the prospects, Post says we’re still a long way from being able to derive a blood serum replacement from algae.

Cost is, of course, another potential deal breaker. Under best-case modeling today, costs could come down to about $65 per kilogram (about 2 pounds) of meat, with the capacity of feeding about 10,000 people per year.

Cultured meat is clearly a long way from being a viable replacement for commoditized conventional beef, and will take a good deal of money and time to scale. But as Isha Datar, executive director of New Harvest, a nonprofit organization that supports cultured meat research, told me, cultured meat holds too much potential to be written off at this stage. “Cultured meat is 10 years away [from commercial viability] but we’re already talking about it and forming opinions about it and that’s great. We get a chance to shape it responsibly,” she says, noting that there was no such wide public education effort in the early days of genetically modified organisms. “We were eating GMOs for 10 years before anyone starting talking about them.”

I’m using “cultured meat” because it is the least gross name for this stuff, which is often referred to as “in vitro meat,” a term that makes haggis and headcheese sound downright refreshing by comparison. Conventional meat has an unfair advantage in this debate because the livestock industry has spent a century convincing consumers to disassociate meat with where meat comes from.

Even some of my most level-headed scientific friends have scrunched up their faces when I mention the research I’ve been doing into lab meat. The ick factor is so pervasive, it seems as though marketers of cultured meat are facing as formidable a task as the scientists developing it.

But if given a choice between, on the one hand, holding a pneumatic gun up to a 1,200-pound cow, right between its eyes, and shooting a steel bolt through its skull to render it unconscious before it is eviscerated, or using a syringe to take a biopsy from a live cow and then bringing that sample to a bioreactor where its muscle stem cells are engineered into meat… well, which process is more icky?

If, even after mulling that scenario, the ick factor of cultured meat still seems potent, consider this: When it was first widely introduced, consumers were uncomfortable with refrigeration. They could not believe it was possible to safely extend food’s shelf life.

A Vision For Real Factory Farming

Cultured meat proponents say once the meat-growing process is honed, concentrated animal feedlot operations (CAFOs) could be replaced by small factories scattered around cities where a few live animals would be maintained to generate cells and the cultured meat would be produced inside bioreactors on site, and sold there as well. This vastly shortened supply chain would go a long way toward reducing the carbon emissions associated with meat’s transport. It could also serve to make consumers more intimate with and accepting of the cultured meat process.

Certainly, cultured meat is not going to replace all conventional meat and it will not displace small farms or hunting traditions. But it could be an important strategy ”“ along with eating lower on the food chain, including perhaps insects ”“ to feed a planet of 9 billion.

Of course a faster, less expensive solution to the environmental horrors associated with factory-farmed meat would be to entice a majority of the 1.2 billion people in the developed world to consume significantly less meat. Unfortunately, the best efforts of activist organizations to expose the brutal side of factory farming have failed to sway significant numbers of daily meat eaters or dairy consumers. So why would environmental arguments, which are far less emotional and visceral, actually change people’s eating habits? They haven’t, and they won’t.

So I say, give cells a chance. Because frankly, if we’re going to take a bite out of meat’s environmental impact, we’re going to need much (much!) more than Sir Paul McCartney rapping about meatless Mondays. Really. It’s horrible. Don’t watch it.

Read the other side of the argument here.