Meat Drunk: A BBQ Expert on Too Much of a Good Thing - Modern Farmer
Food & Drink

Meat Drunk: A BBQ Expert on Too Much of a Good Thing

Besides feeling full, you might feel a rush of blood to the head or even suffer from the meat sweats. Here's why. 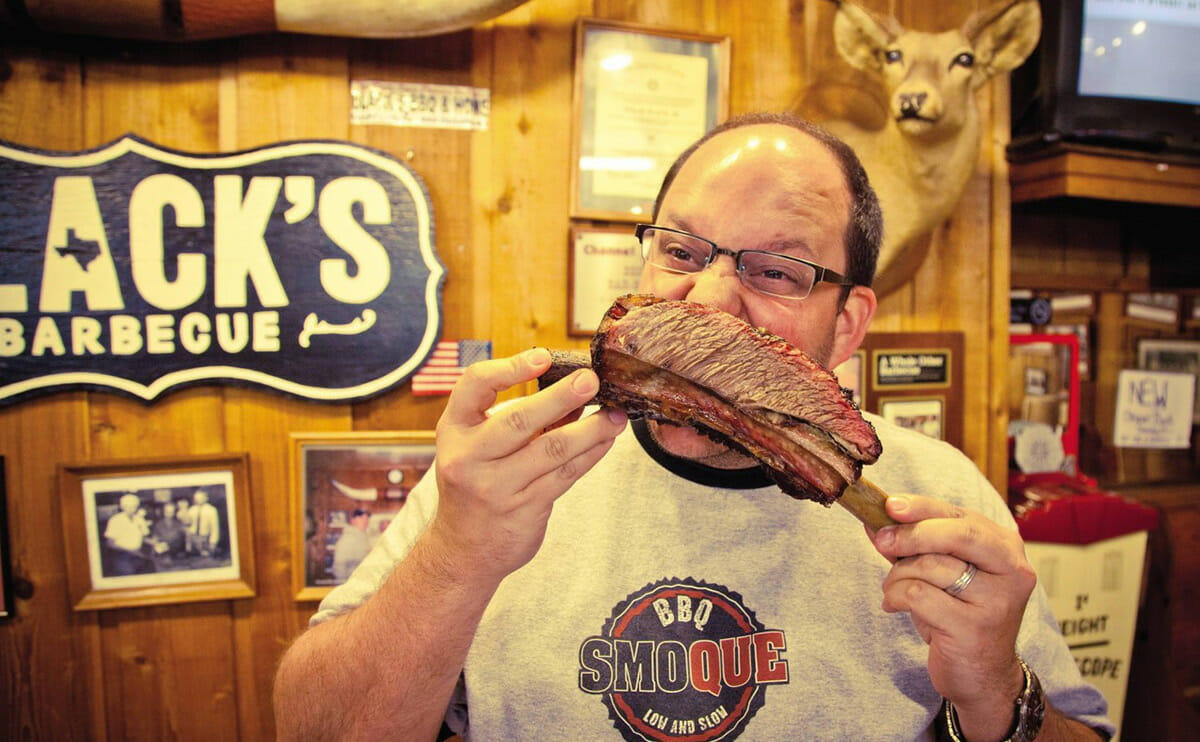 In 1905 Thomas Edison declared the country “food drunk.” He said “Men eat and sleep themselves stupid.” Something tells me Edison wouldn’t be fond of our current obsessive food culture, but it’s hard to care when you’re in a meat-induced stupor. That’s what can happen after a big steak dinner, an ill-advised 10×10 at In-N-Out Burger, or that second turkey leg at a holiday meal. Your body begins to react in ways not associated with normal levels of food consumption. Besides feeling full, you might feel a rush of blood to the head or even suffer from the meat sweats. While the meat sweats haven’t received much attention from the medical community, my bald brow can attest to their existence.

My first memorable bout with this phenomenon was several years ago in Central Texas. A friend and I were in the second day of a three-day/sixteen-joint barbecue tour. We were rookies prone to over-ordering at every stop, but smart enough to avoid sides, bread and desserts. Only 16 miles separated our fourth meal from our first. Sitting at a picnic table inside the now closed Crosstown BBQ in Elgin, Texas, we split a half-slab of spare ribs and a plate of sliced brisket. Our comments on the meat had migrated from sensible evaluations at the first stop to giggling like school girls as we equated the flavor of crispy brisket fat to that of a sugar cookie. I think Dr. Pepper came out of one of our noses and we finished every last bite of the cookie-like brisket.

Being meat drunk is not equivalent to drunk eating. It is an altered state brought on by meat alone, once protein has ceased its purpose of satiety, and moved into the realm of heroin for the stomach.

Let’s be clear about what does not constitute meat drunkenness. The beer-guzzling Kobe beef cattle in Japan or wine-drinking herds of France aren’t our focus. Nor is the act of overeating when already drunk on alcohol. Being meat drunk is not equivalent to drunk eating. It is an altered state brought on by meat alone, once protein has ceased its purpose of satiety, and moved into the realm of heroin for the stomach.

I asked competitive eater Hungry Todd Rungy if a massive intake of hotdogs or beef tongue makes him feel a bit meat drunk. “Yeah! But it’s like an energy drunk! When I eat a delicious brisket it makes me want to run around and karate kick a cherry tree in half!”

Rungy’s spirited side affects are not typical, but a thick 16-ounce ribeye can create a sense of pleasure beyond just the taste of a juicy steak. It can spur the brain’s release of dopamine. If it feels like you’re under the influence, it’s not just coincidence. Connecticut College neuroscientist Joseph Schroeder concluded in a recent study on overeating that “high-fat/high-sugar foods stimulate the brain in the same way that drugs do.” The prevalence of sausage jokes, and people who will laugh at them, toward the end of an extended barbecue trek is all the evidence I need. Those immature chortles are the result of the high before the inevitable crash onto the couch, where the glutton will lay in a state of postprandial somnolence.

That hazy feeling in your head after massive meat consumption might just be artificially induced low blood sugar. Dr. Sasha Stiles from Tufts University told NPR that overeating “sets your body chemistry sort of into red alert.” She further explained that “the kinds of hormone and metabolic processes that normally will try to metabolize food will go into overdrive to make sure they get rid of this huge food load.” Basically, after a few pounds of brisket your body freaks out and starts over-producing insulin to process the extra food load. Before your digestion system realizes it, too much sugar has been eliminated, and your blood sugar is actually lowered. That’s why dessert can still taste so good after an indulgent meal.

Like actual drunkenness, the only cure for meat drunkenness is time. The hair of the steer should be enlisted only by professionals and masochists. Building up a tolerance isn’t recommended unless you’re also interested in enhancing your BMI. Remember, everything in moderation, unless you’re trying to get meat drunk.