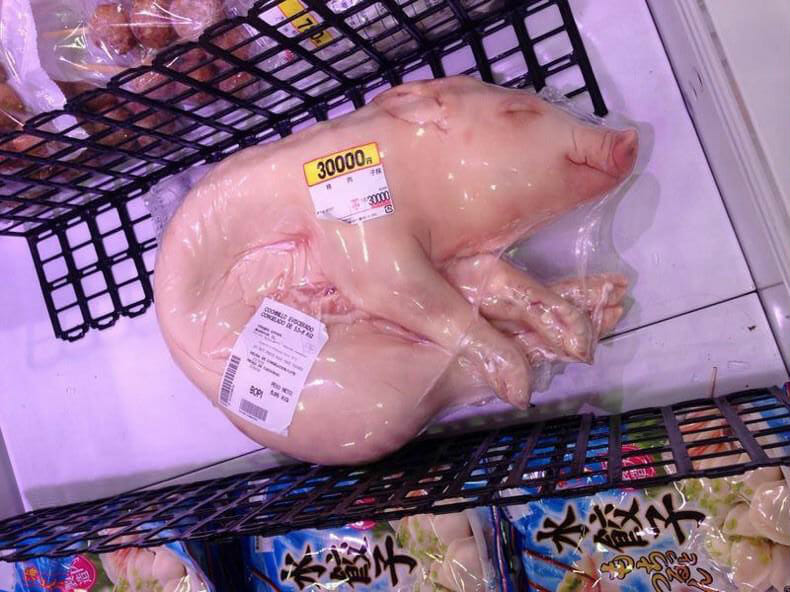 In the past few years, as American grocery stores have progressed to the point where even Walmart is selling locally-grown produce, it can be easy to forget that despite our quinoa and pork belly, there are still some delicacies that have yet to breach our shores. Case in point: one Japanese Twitter user spotted a shrink-wrapped whole suckling pig in the frozen section of the grocery store — and that’s not the only place to find such a thing.

Twitter user @WadaiTweet posted this picture of a whole, frozen suckling pig, wrapped in plastic wrap, and looking oddly and sort of disturbingly at peace. Google Translate semi-helpfully decodes the Japanese tweet as “Was selling frozen piglets in Super,” though @WadaiTweet hasn’t responded to our tweets for more information on where he or she spotted the pig.

The price, though, is easily visible: ¥30,000, about $280. That’s pricey; noted butcher Savenor’s, in Boston and Cambridge, sells suckling pig for $8.99 for up to 20 pounds, meaning a hefty 20-pound pig would only cost $180. On the other hand, Savenor’s needs 30 days notice to supply a suckling pig that size, while this Japanese piglet is sitting there in the frozen section whenever you need it.

Some searching around finds that Japan isn’t the only place to find a shrink-wrapped suckling pig; this market in Madrid is selling the same product. Hasn’t quite showed up at our local Whole Foods yet, but fingers crossed for someday.

(via RocketNews24, image via @WadaiTweet)