In the forests of Hawaii's Big Island, one-ton wild cattle are easily the biggest and most dangerous game for hunters. But what are they even doing there? 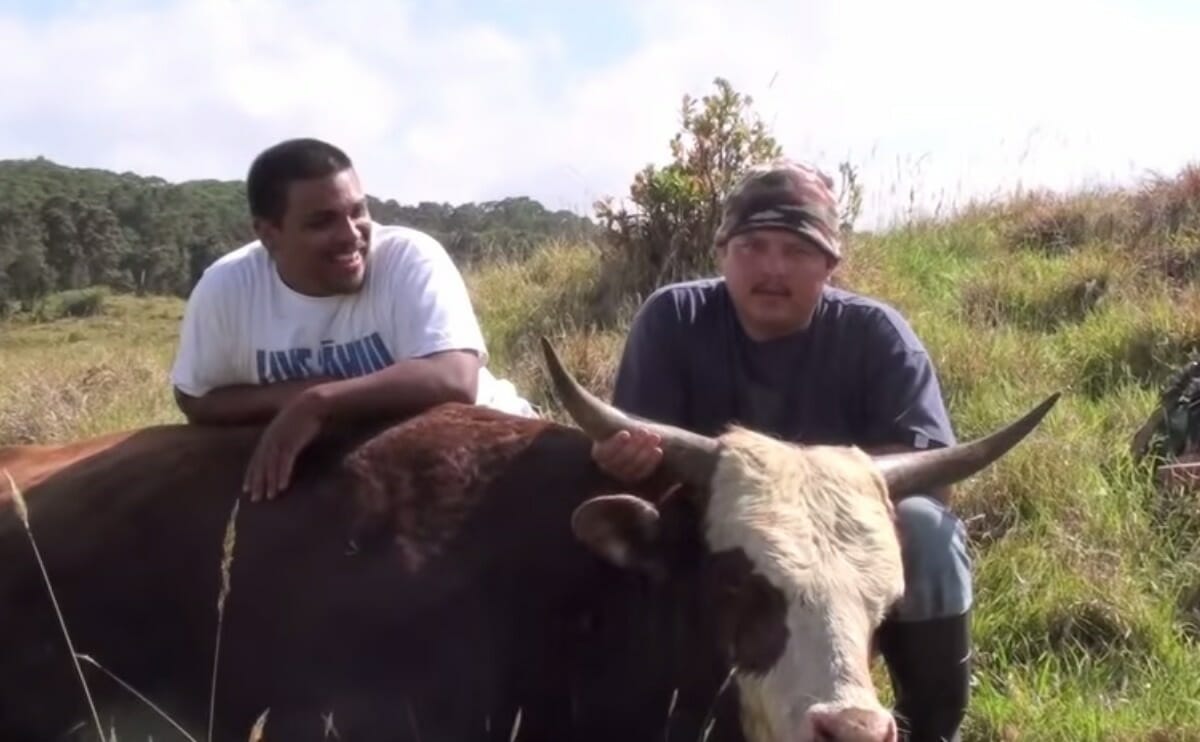 “If they spot you first, they’ll definitely come for you,” says Orion Enocencio, manager and hunting guide at Ahiu Hawaii, an adventure company on the Big Island in Hawaii. Some of the most dangerous hunting in the entire United States is to be found on a single island in the most isolated island chain in the world. It’s not grizzly bears or mountain lions or even bison: it’s the wild Hawaiian cow.

Hawaii has precious few endemic animal species; the only endemic mammals are one bat and one seal. At 2,400 miles away from the nearest continental beach, Hawaii stayed animal-free for millenia. How would animals get to the Hawaiian islands to settle, if not by air or by sea? Humans introduced the vast majority of animal species to the islands, beginning with the Polynesians in, we think, around 300 CE, who brought with them a species of rat. Everything, animal-wise, is new in Hawaii.

In the last few years of the 18th century, the British navy captain George Vancouver, one of the first Europeans to explore the Pacific, landed on the Big Island of Hawaii (the island is also named Hawaii, but generally referred to as the Big Island). He had left from Veracruz, Mexico, and as a gift, had brought the Hawaiian king Kamehameha I some Mexican cattle: four males and eight females, of the Hereford breed, a classic British red-and-white cow. Kamehameha placed the cows under a kapu, a hunting taboo, for ten years. “Nobody could hunt or eat them, anything like that, until they reached a good number,” says Enocencio.

In just a few decades, the cows wreaked havoc on Hawaiian settlements.

But the Hawaiians weren’t used to cattle; the largest animal then on the island was the domestic pig, and the enclosures built for the cows weren’t nearly strong enough to hold them. The cows bred, and broke out of their enclosures whenever they felt like it, and fled into the mountains. Even though the mountains of Hawaii are surely different from the hills of the West Midlands of England where the Hereford cattle originated, the cows thrived. The king, by then Kamehameha III, eventually lifted the kapu in 1830, but it didn’t much matter; the cows were established in the forest. By 1846, there were 25,000 wild cattle in Hawaii in addition to the cattle the Hawaiians had managed to keep domesticated and in pens.

In just a few decades, the cows wreaked havoc on Hawaiian settlements. A bull’s horns can grow as large as six feet across, and reports of cows destroying thatched houses, rampaging over farms, and injuring and killing people and horses were common. Scottish botanist David Douglas, for whom the Douglas fir is named, was killed by a wild Hawaiian bull in 1834. Something had to be done, and Kamehameha III called in assistance from the very place from which the cows came: Mexico.

In the early 1830s, Mexican vaqueros, or cowboys, were brought over to Hawaii to teach Hawaiians the skills they’d need to deal with the sudden influx of 2,000-pound horned beasts that never belonged on their islands in the first place. Known now in Hawaii as “paniolo,” the Mexican vaqueros brought cowboy culture to the islands, which promptly mixed with Hawaiian and Polynesian culture in unexpected ways. The ukulele, the instrument most associated with Hawaii, is the result of this infusion of Mexican cowboy culture, and the hybrid paniolo culture survives today in ranches on the Big Island. “That’s when the Hawaiians started becoming cowboys as well,” says Enocencio.

But the cows were so numerous and so entrenched that they couldn’t really be eradicated. They began to adapt to their new surroundings: modern Hawaiian wild cattle are considered a unique feral breed, slightly smaller than other Hereford cattle, boasting longer legs to tromp through the undergrowth, and thought of as tougher, with wild instincts.

It can be kind of difficult to think of cows as dangerous big game; our vision of the friendly dairy cow is a powerful one. But elsewhere in the world, varieties of wild bovine are feared more than even carnivores. In Africa, of the legendary “Big Five” game species — lion, leopard, rhinoceros, elephant, and cape buffalo — it is the cape buffalo, a distant relative of the cow, that is the most feared. In Hawaii, “a lot of horses do die,” says Enocencio. “Trucks, four-wheelers get flipped.” Set aside your conceptions of “cow,” and think about an enormously muscled 1,500 to 2,000-pound animal, with horns the size of a full-grown man, which hangs out in herds of bored and testosterone-driven bachelor males, and has no fear of humans and no qualms about charging. It makes a grizzly bear seem cuddly.

In Hawaii, “a lot of horses do die. Trucks, four-wheelers get flipped.”

Cattle hunting in Hawaii today is, says Enocencio, legal and unrestricted, as long as you aren’t on private land or protected public land. The Department of Land and Natural Resources has lately even resorted to calls for cattle hunters to eradicate cattle from certain public areas, like Puu Oo, a popular hiking destination on an active volcano. The DLNR considers the cattle an invasive species which damages the local ecosystem and manages their population through airborne shooting. This doesn’t endear them much to hunters who grew up with the cattle. “They’ve been in this beautiful place for more than 200 years,” says Enocencio. “All of a sudden the state is saying they’re destroying everything.” From Enocencio’s perspective, hunting wild Hawaiian cattle is a tradition, and even a way for isolated Hawaii to provide some of its own meat. “I have eight boys and that’s what we live off,” he says.

It isn’t an easy way to live. Ahiu Hawaii operates about 40 cattle hunts per year, and each hunt requires a team of several people. The cows aren’t hard to find, but they can be hard to pin down. They move, according to forum posts from hunters like Nicolai Barca, who operates a Hawaiian-centric hunting and fishing site, silently and quickly, and have excellent hearing and vision. Ahiu Hawaii requires that each hunter carry, minimum, a rifle that fires heavy-duty .300 Winchester Magnum cartridges, and Enocencio tells me that a single shot is never enough to fell a bull. And a wounded bull is apt to charge.

Then there’s the problem of sheer weight. It’s not common to hunt animals this big; a mature deer buck might weigh 180 pounds, maybe 75 pounds of which is meat. A mature wild Hawaiian bull could weigh up to 2,000 pounds, about half of which might be edible meat. It’s just not possible for a hunter to responsibly eat that much meat (Enocencio says his company often gives meat to the community). Carrying out 800 pounds of meat is the kind of problem hunters don’t usually have to deal with. Very little about hunting wild Hawaiian cattle is like hunting other animals.

The DLNR’s stance is that the cattle are a non-native species that the island’s delicate ecosystem can’t support. Until only a few centuries ago, Hawaii had no land mammals at all, so the plants, insects, and birds that populated the island formed a balance that’s been completely thrown off by the rapid introduction of rats, then pigs, then dogs, and then wild cattle. The cattle stomp and eat the vegetation that’s had no time to evolve any protection against them, allowing other invasive species, like grasses, to take their place. That in turn affects the ability of every other life form on the island to survive: without the plants, the insects and birds lose a food source. And the cattle’s stomping also causes erosion of the island’s edges, forcing sediment runoff down into the coral reefs, which can have disastrous effects on the underwater ecosystem as well.

Enocencio, though, sees a place for them on the island, “with the right maintenance and the right management.” In the meantime, he offered a tip on how best to eat them. “The trick to wild cattle is, you gotta double-grind ’em,” he says. “You double-grind it and it’s nice, way better than the supermarket.”