Lionfish Are Seriously the Scariest Fish in the Ocean - Modern Farmer
Animals, Plants

Lionfish Are Seriously the Scariest Fish in the Ocean

When you think of major scourges to our world fisheries, you probably think of overfishing, or bottom trawling, or pollution or climate change. But it may actually be the the invasive, poisonous, violently predatory lionfish. 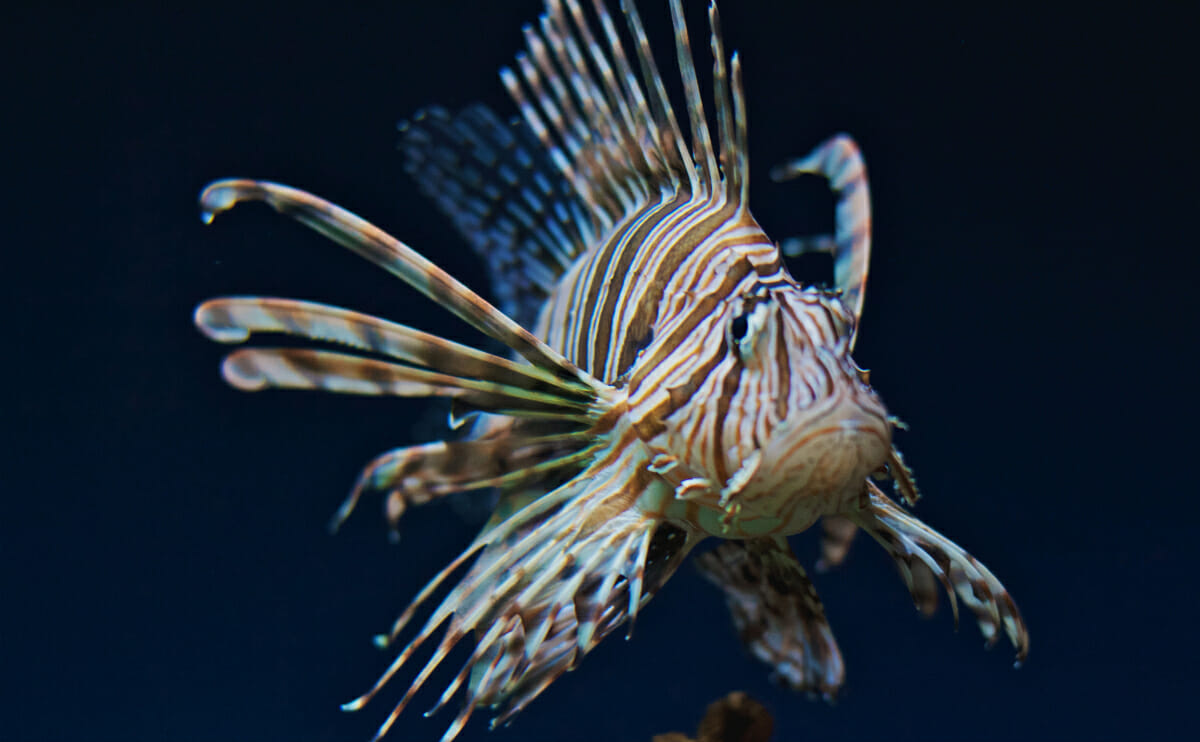 When you think of major scourges to our world fisheries, you probably think of overfishing, or bottom trawling, or pollution or climate change. But some new research from Kurt Ingeman of Oregon State University finds yet another reason to elevate the invasive, poisonous, violently predatory lionfish to the top of that list: unlike other fish, it will hunt prey literally to extinction — and that spells major problems for the fish we like to eat, like snapper and sea bass.

So, basics on the lionfish: Native to the Indo-Pacific Oceans, the lionfish is a small but fearsome predator, decked out with venomous spines all over its body. The spines serve as protection, not as a hunting aid, and are intense enough to cause, at best, severe pain to humans (they are rarely deadly (correction: fatalities are often cited vaguely, but I can find no documented specific instance of death by lionfish venom)). It also happens to be very pretty; it’s covered in red, brown, cream, and black stripes, which make it look very ornate and lovely – even though the biological purpose of the stripes is to alert predators about that brutal venom it’s packing.

Unlike other fish, it will hunt prey literally to extinction.

Because it is pretty, and hardy, it’s frequently kept in saltwater aquariums (aquaria? That never looks right), but in part because it will eat anything it sees, it’s often released into the ocean where it doesn’t belong. The lionfish has thrived in the warmer Atlantic and Caribbean, and is one of the worst invasive species those areas have ever seen. It eats pretty much everything, is an adaptable and adept hunter, and worse, native prey fish don’t recognize it as a predator, because it’s only been around for a few decades in that part of the world. Nobody’s quite sure what to do about that; when prepared properly, it’s edible, and many, including Mark Bittman of the New York Times, have attempted to get people to eat them. And that seems even more important now, given this new information that the lionfish will devour prey long after most other fish have moved on.

Many, including Mark Bittman of the New York Times, have attempted to get people to eat them. And that seems even more important now, given this new information that the lionfish will devour prey long after most other fish have moved on.

That’s not to imply that most carnivorous fish have some sense of minimum viable populations of prey species; they’re fish, and fish mostly are not as smart nor as fluent in research analysis as conservation biologists. But most hunters, below or above the water, tend to go where the prey is in greatest number. It doesn’t make sense to stick around when prey species are rare; when most predators have eaten prey to a level where hunting becomes difficult, they leave in search of new prey. Lionfish, it seems, are not most predators.

The research found, by creating an artificial reef environment stocked with the fairy basslet, a favorite food of lionfish, that basslet mortality was a whopping four times higher with the lionfish than with natural predators. That means that the lionfish sticks around as prey species as prey populations grow smaller and smaller. This can easily lead to local extinction for some of these species, which can have huge negative effects on those ecosystems.

It can also have huge negative effects on our fishing stock. Most of our favorite fish to eat — snapper, tuna, sea bass — are also top-level predators. The lionfish isn’t a threat to a full-grown snapper or tuna, but it’ll out-compete them for food, which has the same effect. If the lionfish eats into extinction all the food the snapper likes to eat, that’ll mean no more snapper.