This Twenty-Something Hopes to Unleash the Next Green Revolution

A brilliant and unusual 26-year-old Amish man with a big vision. 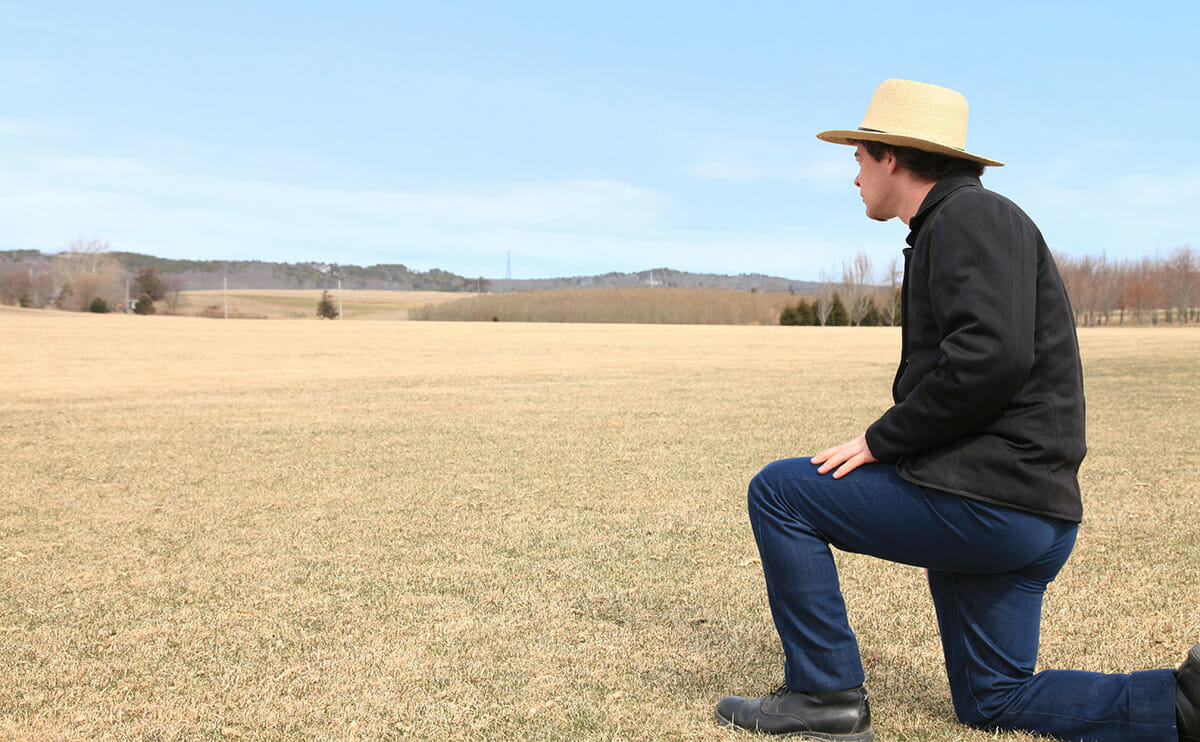 In 2010, a young man on a quest for enlightenment walked into the office of Jerry Hatfield, director of the USDA’s National Laboratory for Agriculture and the Environment in Ames, Iowa. His name was John Kempf, and he was eager to learn more about Hatfield’s plant physiology work, which deals with the complicated interactions of plants, soils and the atmosphere.

The two talked agronomy for several hours before Hatfield sent Kempf on his way with a stack of literature to devour. The visit was just one of many steps on Kempf’s journey, which had begun six years earlier in a blighted cantaloupe patch. Desperate to rescue his family farm from worsening disease and pest problems, Kempf dove into deep-end science, looking for solutions he couldn’t find in the conventional farming playbook.

In the process, Kempf became a staple on the alternative-ag lecture circuit and the CEO of a rapidly growing consulting firm that his followers hail as the next best thing in sustainable, profitable agriculture. The most hopeful even say that he and his company offer a glimpse of a better farming future, uniting the best that our various schools of agricultural thought have to offer. 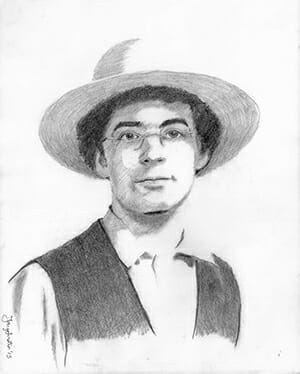 As a member of the Amish church, Kempf does not allow his face to be filmed or photographed, though sketches are permitted. / Courtesy AEA.

Kempf is just 26 years old. He is also Amish, and has only an eighth grade education.

Once he finished school at age 14, Kempf went to work on his family’s fruit and vegetable farm in northeastern Ohio, overseeing irrigation, plant nutrition and herbicide and pesticide applications. In the fields, Kempf used horses instead of a tractor, with a sprayer powered by a small Honda engine.

It was a trying time for the family. Pests and disease were ravaging the crops, and Kempf found himself mired in escalating chemical warfare against them, with little success. Things hit a low point in 2004, when well over half of the Kempfs’ mainstay crops ”“ tomatoes, cucumbers, zucchini and cantaloupes ”“ were lost. With the family staring at an increasingly bleak financial situation, Kempf, then 16, set off on his mission to relearn everything he’d been taught about farming.

He began by looking closer at one of that year’s few bright spots: the fact that some cantaloupes on a piece of land directly adjacent to the Kempf farm had actually done well. That year, the Kempfs had run rows of cantaloupe from their old fields to the new one, which had not been subjected to years of heavy chemical application. The results, as Kempf describes them in one of his YouTube videos, were jarring.

On the old field, powdery mildew struck with a fury. But directly on the other side of the boundary ”“ which showed up as clearly as “a knife line,” says Kempf in the video ”“ were identical plants cared for in an identical manner and yet which remained completely, gloriously healthy.

Unwittingly, it served as a rigorously controlled experiment. The variable was the differing histories of chemical use on either side of the property line, and Kempf looks back on it as his Eureka moment.

Kempf felt that the answers to his questions did indeed exist, but that the folks who held them had their noses so deep in their own work they were missing the bigger picture.

Why, he wondered, did the plants on the new field thrive, while the others withered? And why, more generally, were pest and disease problems on the farm getting steadily worse, despite Kempf’s best efforts to spray them into oblivion? He dug into periodicals like the Soil Science Society of America Journal and Biology and Fertility of Soils. He picked the brains of knowledgeable people. He identified gaps in his knowledge and then he chased them all down: botany, pathology, entomology, physiology, immunology, etc.

Kempf felt that the answers to his questions did indeed exist, but that the folks who held them had their noses so deep in their own work they were missing the bigger picture.

“Agricultural research and education has focused on areas of specialty,” says Kempf. “Many of [these scientists] believe that the answer to agricultural challenges lies within their own area of research, and they don’t communicate with each other.”

Kempf, though, was eager to communicate with all of them as he systematically worked to find, understand and synthesize these disparate bits of knowledge into a unified understanding of soil and plant health that he could apply to the farm. And although he was still a teenager who’d never even taken a ninth-grade science class, he found that scientists like Hatfield were eager to work with him.

“I was taken seriously,” Kempf says, “because I was able to ask really intelligent questions and I didn’t tell anyone how old I was.”

Kempf quickly began to suspect that the chemical-drenched farming methods he’d been using were causing, not helping, his problems.

“A lot of materials used in corporate agriculture have the capacity to enhance plant growth and performance, but they suppress soil biology,” he says.

The scorched-earth tactics he’d employed with his pesticides and herbicides, he realized, had worked all too well. The microbial life critical to healthy soils had become collateral damage. Afterwards, in a best-case scenario, Kempf could coax his cantaloupes and other crops to acceptable yields only by practically drowning them in fertilizer. He threw this approach out the window. Instead, by focusing on creating healthy soils, he’d let plants do what plants have evolved to do best when they’re given a fighting chance: grow like crazy.

By 2006, Kempf had quit pesticides altogether and was spending an increasing amount of time talking about his ideas with scientists and farmers all over the country. His father issued an ultimatum: Stop talking or make some money doing it.

Kempf picked the second option and founded his crop consulting company, Advancing Eco Agriculture (AEA) in 2006. His spiel, in a nutshell:

Healthy soils support healthy plants. Healthy plants have healthy immune systems that fend off disease. Finally, according to Kempf, plants with healthy immune systems are more nutritious. (There isn’t, however, solid scientific evidence directly linking healthy soils with more nutritious food, primarily because there isn’t an agreed-upon scientific definition of “healthy soil.”) AEA also says its approach allows farmers to realize yield gains of between 10 and 30 percent and that eliminating the need for pesticides drives farm costs down.

Kempf eschews the phrase “sustainable” because that would imply there’s much worth sustaining about the current state of farming. Instead, he calls his approach “regenerative agriculture.” He occupies a curious niche, advocating that farmers ditch pesticides while simultaneously critiquing organic farming. Mainstream organic agriculture, says Kempf, is all about “negative certification” and is preoccupied with what farmers aren’t allowed to do ”“ no GMOs, no chemical pesticides, no this, no that, etc. While that ensures that organic products are largely free of pesticides, it provides no assurance that crops in an organic farmer’s field are thriving, or that organic produce is healthier than its conventional counterparts, according to Kempf.

His approach is more proactive. AEA sells all sorts of products intended to improve soil and plant health in some form, and takes sophisticated measurements to monitor plants’ health throughout the growing season. It is simultaneously a throwback to pre-industrial agriculture and an embrace of its latest technological innovations.

People are responding to this philosophy. Growth has been rapid; Kempf says AEA now has about 30 employees and a few thousand clients across the country.

Larry Keefer, a lifelong farmer who plants 500 acres of soybeans, wheat and corn west of Lansing, Mich., is among the growing number of AEA clients who have become believers in the approach.

“I just consider this a new and better way of [farming],” says Keefer, who has experimented with different non-conventional techniques for nearly two decades.

One of Keefer’s most valuable crops is a high-grade, non-GMO soybean used to make tofu in Japan. His bushel-per-acre yields are typically in the high 40s. Last year, he gave AEA a try on a 40-acre test plot and harvested 59 bushels per acre ”“ an increase that will “add up in a hurry” to the bottom line.

He says he was the first in his area to sign on with AEA; this year, at least 10 others have joined him.

Perhaps one of the most intriguing things about Kempf, though, is the way he walks a line between the divided ideologies in agriculture today, eschewing rhetoric in favor of results.

In its aversion to chemicals, focus on a healthy agricultural ecosystem and emphasis on quality over quantity, AEA calls to mind crunchy, tie-dyed farming. But Kempf, from a conventional farming background himself, also uses the same “feed-the-world” talk as Big Ag, and the AEA website is free of the feel-good organic lingo that Michael Pollan calls “supermarket pastoral.”

Kempf, a recognized expert in agronomy and soil science who quit school after the eighth grade, is himself something of a stereotype-defying guy. As a member of the Amish church, he neither drives a car nor travels by airplane; as the CEO of a rapidly growing consulting outfit, he employs the services of a New York PR firm and maintains a sleek, culturally aware presence on Twitter and the blogosphere. He runs AEA alongside the company’s chairman, Phillipe van den Bossche, an investor who lives in Manhattan, who previously worked for Madonna, and who readily acknowledges that he and Kempf are from “opposite ends of the spectrum.”

Kempf says he intends to convert 10,000 conventional farmers to his AEA program by 2016. Those familiar with Kempf and his ideas say he’s headed in that direction.

“I see [his approach] as sort of a ‘new mainstream’ in agronomy, as opposed to the old N-P-K approach,” says Michael McNeil, a crop consultant from Iowa who has known Kempf for years and who believes it’s just matter of time before regenerative agriculture catches on more widely. “As the profit margins get less and less for the farmer, they’re going to start looking for other ways to survive. And spending a lot of money on agri-industry is not working for them.”

For his part, Kempf says his ultimate goal is to “impact the quality of food” and “to see these regenerative models of agriculture become the accepted model of agriculture around the world.”

In other words, he plans to take regenerative agriculture so mainstream that the two become one in the same.

The first several paragraphs of this story about John Kempf are missing. Can you please add them?