Radar analysts in Albuquerque, New Mexico were stumped last week when a mysterious blob moved in over the region. What looked like a run-of-the-mill rainstorm turned out to be a grasshopper invasion. 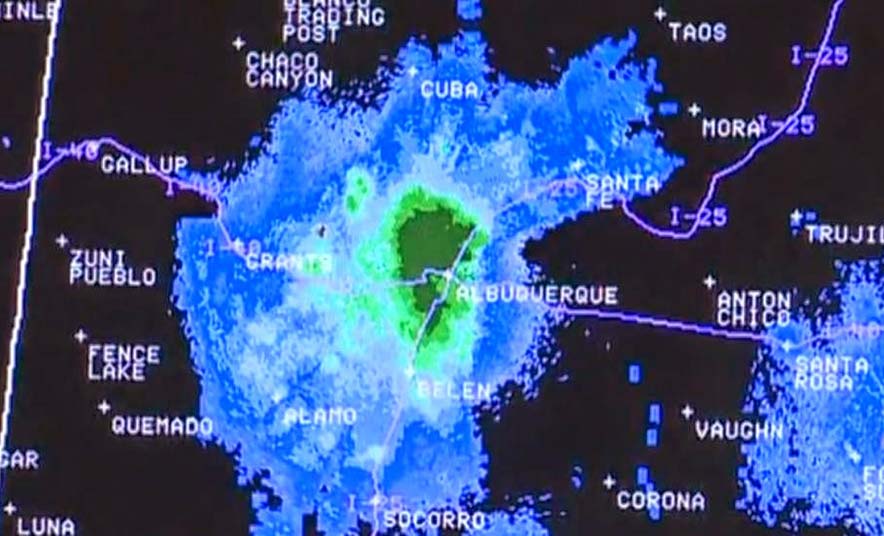 The swarm first appeared on weather radar maps just after Memorial Day weekend. At first technicians thought their equipment was malfunctioning, as the blip did not match the weather observed outside. It turned out that the air was so thick with insects that on radar it looked like a torrential downpour.

National Weather Service incident meteorologist Brent Wachter says the swarm may have got caught up in some powerful winds and carried as high as 2,000 feet, more than high enough to be picked up by radar.

“I’ve worked for the National Weather Service for 13 years and I’ve never seen grasshoppers show up on radar before,” he says. 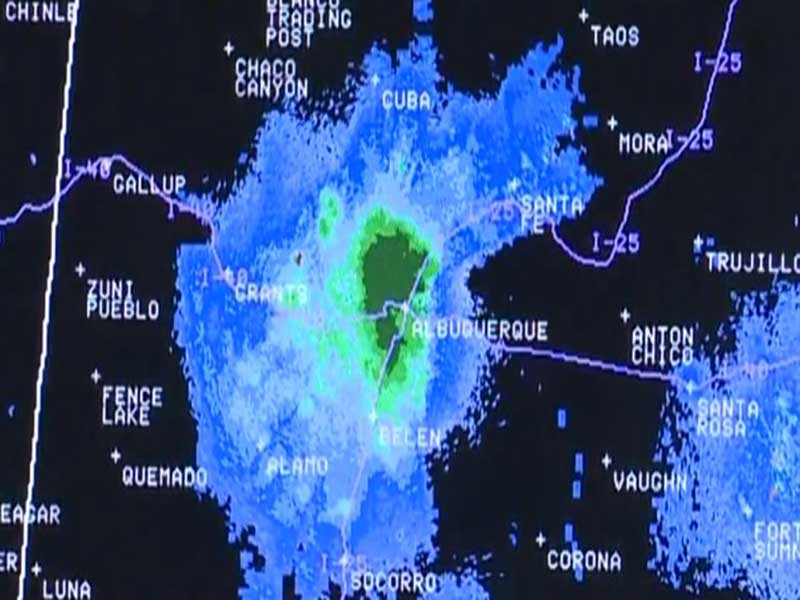 The swarm converging on Albuquerque.

John Garlisch, an agricultural extension agent at the Bernalillo County Cooperative Extension Service says the long winter drought ”“ the area hasn’t seen substantial rainfall in nearly eight months ”“ allowed more eggs to hatch than usual. He says grasshoppers are native to New Mexico and a common sight this time of year. However, the area has not seen an infestation this large in nearly 20 years and he thinks the swarm has come to the urban center in search of “greener pastures.”

“The drought has made food harder to come by out on the open range lands, there’s a lack of tender green shoots for the swarm to feed on. In the search for food, what better place to look than the Rio Grande river valley and the lush green lawns and gardens of Albuquerque?”

‘The best bet is to catch as many as you can and go fishing.’

He says the Extension Service has received many complaints about the invasion but urges homeowners and gardeners to be wary of insecticides and other chemical deterrents.

“Spraying insecticides will cause more harm than good, the best response is to just let it pass.The hoppers are not spreading disease and will leave eventually. The best bet is to catch as many as you can and go fishing. Or dip them in chocolate and make yourself some snacks.”

Although the swarm may be an annoyance for now, Albuquerque is bound to be the epicenter of the country’s next big food trend.