The Great Artisanal Cheese Panic of 2014: A Postmortem

Last week's big cheese scare -- that the FDA would ban aging on wooden boards -- came and went like a lightning bolt, but it left a few scorches behind. 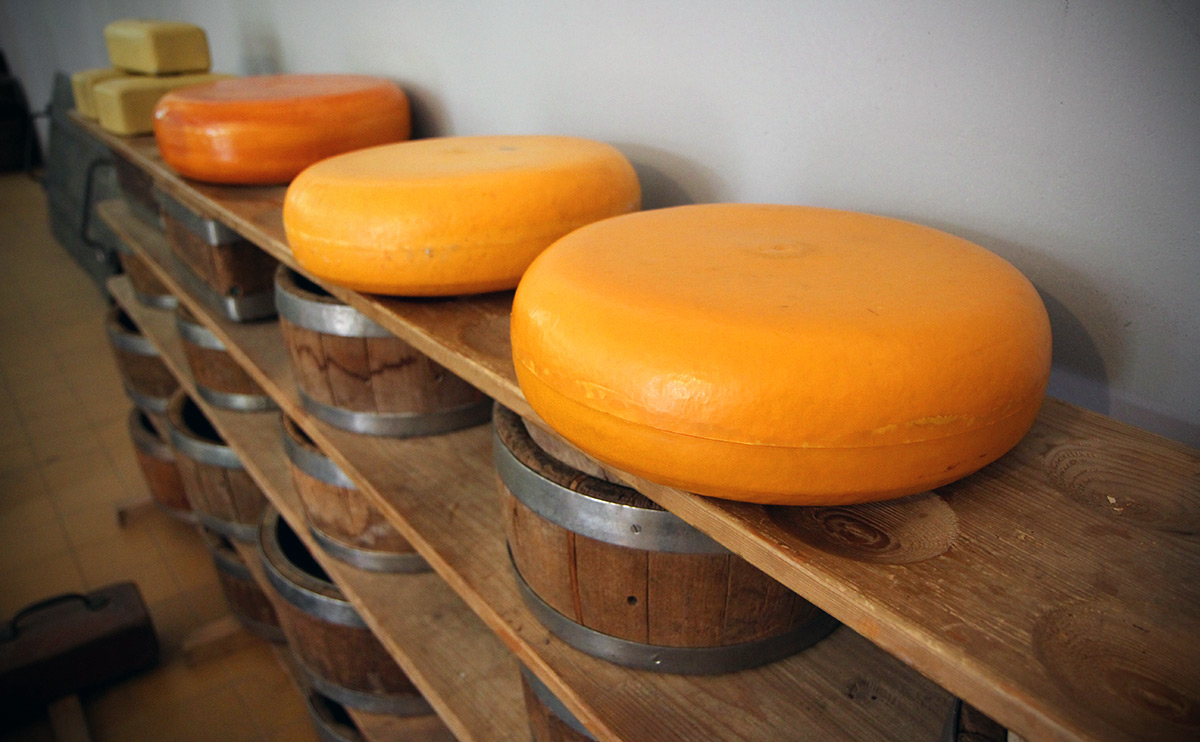 It all began when an FDA apparatchik, in what she must have thought was routine fashion, responded to a request for clarification on a the FDA’s view on aging cheese on wooden boards. She apparently didn’t realize that her response — that cheese should not be aged on wooden boards — posed a potential major threat to a big chunk of the cheese business. Then came the apocalyptic “this is the end” headlines. Then the FDA backed off a bit. Then came the shrugging “this is no big deal” headlines. All within a couple of days.

It all began when an FDA apparatchik, in what she must have thought was routine fashion, responded to a request for clarification on a the FDA’s view on aging cheese on wooden boards. She apparently didn’t realize that her response — that cheese should not be aged on wooden boards — posed a potential major threat to a big chunk of the cheese business.

The truth? This isn’t the end, but it actually is kind of a big deal. Yes, the artisanal cheese business is relatively small. But imagine if an FDA regulator were to declare, say, high fructose corn syrup to be unsafe, and that it could no longer be used as an ingredient. Big food processors would go nuts. The corn industry might stage a coup d’etat. This was really no different, just played out a on smaller scale.

It was no surprise that cheese makers were upset by the initial FDA announcement. And they weren’t the only ones. The response sent in January by FDA branch chief Monica Metz to the New York State Department of Agriculture, and made public last week, revealed not only a particularly clumsy bit of bureaucratic bumbling, but also the agency’s continued struggle to adjust to the sweeping Food Safety Modernization Act of 2011, which has meant a change in the FDA’s emphasis away from responding to disease outbreaks and toward preventing them (which has meant more inspections, but not much more money to carry them out). Metz’s letter also created confusion among people trying to navigate conflicting state and federal regulations. And to some critics of the FDA, it highlighted the agency’s woefully misdirected focus.

One such critic, Food & Water Watch, used the incident to argue, somewhat incongruously, that the FDA is spending its time hassling small-businesspeople when it should be going after Big Food. “Any rule that promotes processed, industrial food (like Velveeta) over handcrafted foods is not something we should support,” the group’s statement declared, while also making sure to mention that a former Monsanto executive, Michael Taylor, heads the FDA.

But of course it’s not a zero-sum game, and if the use of wooden boards did pose a health danger, we surely all would want the government to do something about it. There is no indication, however, that this centuries-old practice, which gives many cheeses their character, is dangerous at all, assuming proper sanitation methods are used.

The cheesing-aging imbroglio actually started a few years ago, when the FDA sent a post-inspection warning letter to the Finger Lakes Farmstead Cheese Co. in Trumansburg, New York, indicating that listeria had been found in the company’s production facility. It ordered the company to take remedial action. The letter made no mention of wooden boards, except to note that they needed to be kept clean. There was back and forth wrangling and the government finally filed a lawsuit. In April, the parties signed a consent decree ordering the company to close down until it had taken action to control the pathogens. Nobody was ever sickened by Finger Lakes’ cheeses, and there has never been any link established between the company’s use of wooden boards and the presence of listeria.

Last August, while Finger Lakes’ owner Nancy Taber Richards says she was doing all she could to comply with the FDA’s ever-changing — and increasingly alarming — demands, a local FDA inspector issued a terse written notice about the company’s continued use of wooden boards. Richards says that was the first time the FDA had mentioned that issue. In language very similar to the later communique from Metz, the report read in part: “Wooden boards are made from a material (wood) that cannot be adequately cleaned and sanitized.” This represented a “repeat violation that was noted during the last inspection of your facility.”

A repeat violation of what? The note didn’t say. The implication was that Richards would have to replace the boards with either plastic or stainless steel shelving, at considerable expense — tens of thousands of dollars. “It was frustrating because I was very cooperative and responsive with them,” she says.

Given the mixed messages, Robert Ralyea, senior extension associate at Cornell’s Department of Food Science, sought clarification from New York state regulators, who in turn queried the FDA. Metz’s response in January, which prompted last week’s industrywide freakout, included a declaration that wooden boards do not adhere to regulations because it’s impossible to clean them adequately.

Which, by all accounts, is nonsense. It’s true that wood, being porous, provides a friendlier environment for bacteria. But there is nothing to indicate that wood shouldn’t be used to store aging cheese, as long as it is properly sanitized. What few studies have been done have tended to conclude that the practice is essentially safe. Nobody, including the FDA, can think of a single incidence of listeriosis caused by wood-aged cheese, much less an outbreak.

State regulations in New York, Wisconsin, California and elsewhere explicitly allow cheese to be aged on wooden boards, and describe proper cleaning procedures. In its backpedal last week, the FDA said it would work with producers and food-safety experts to determine whether and how to regulate the use of wooden boards. In its attempt to “clarify” the situation, the FDA stated that “… we have not and are not prohibiting or banning the long-standing practice of using wood shelving in artisanal cheese.” Note the absence of anything like, “… and we do not plan to do so in the future, because that would be overkill.” And also the absence of, “We apologize to Ms. Richards for the confusion and turmoil we have put her through.”

Not that anybody, including Richards, is feckless when it comes to food safety. “I understand that they found listeria, and that I had to do something about it,” she says. But the FDA’s tactics “were a shock to me,” she adds. “I was doing every thing I could do to comply.” At one point, she says, an inspector told her she would have to destroy an entire year’s worth of cheese. Apparently, they never followed through on that. But for the time being, the facility is shut down. Because of all this, Richards says she can’t land a business loan to get her through the rough patch. The banks “don’t know if I will be able to make cheese,” she says.

Cornell’s Ralyea says: “There is no room for listeria in a processing area. But if wooden boards aren’t responsible for it, it makes no sense to ban them.” For now, he says, artisanal cheesemakers are left “without clarity” because “nobody knows what the next move is.”

The next move might be in Congress, where several lawmakers have weighed in on the side of the artisans, and some have vowed to rein in any attempt to ban the use of wooden boards. Peter Welch, a Vermont Democrat, has introduced an amendment to an agriculture-appropriations bill that would tell the FDA specifically that it cannot prevent or limit the use of wooden boards to age cheese.

Rather than simply admitting to a bureaucratic fumble, the FDA has hunkered down and engaged in a bit of dissembling.

Rather than simply admitting to a bureaucratic fumble, the FDA has hunkered down and engaged in a bit of dissembling. In its “clarification” last week it insisted that Metz’s response to the state’s query “was not a policy statement,” even though the query was explicitly a request for guidance on policy. The consent decree signed in April — the government’s last word on the issue as of now — doesn’t mention anything about the presence of wooden boards at Finger Lakes’ facility.

FDA spokeswoman Lauren Sucher said in an email: “In the interest of public health, the FDA’s current regulations state that utensils and other surfaces that contact food must be ‘adequately cleanable’ and properly maintained. Historically, the FDA has expressed concern about whether wood meets this requirement and has noted these concerns in inspectional findings.” But to outside observers, Metz’s letter, as well as the earlier inspection notice, went a lot further than merely noting concerns.

One final note: While “artisanal” might make it sound like the only cheese producers affected by all this are hippie-owned operations run out of charmingly dilapidated barns, there are actually some bigtime companies out there making artisanal cheeses, many of which are aged on wood (e.g., Sartori, Emmi Roth USA, Belgioioso, Yancey’s, Cowgirl Creamery, and Jasper Hill). Many of them sell to to big national retailers like Kroger and Whole Foods.

“In Wisconsin alone, there are 33 million pounds of cheese cured on wooden boards” each year, says Jeanne Carpenter, a “cheese geek” who writes the blog “The Cheese Underground,” where she broke the story of Metz’s letter. That’s only a fraction of the 2.6 billion pounds of cheese produced in Wisconsin in 2011. But it’s still a lot of cheese. Artisanal cheese generated $14 billion in sales in 2010, according to Packaged Facts. It’s a large and growing business. Whatever substance Kraft American Singles are made from is not aged on wooden boards, but a lot of the tastier cheeses are. In other words, if you eat quality cheese, this affects you, too.