Four times the size of a chicken egg and loaded with nutrients, some farmers are moving into harvesting goose eggs. The only problem? Being quick enough to get the egg away from the goose. 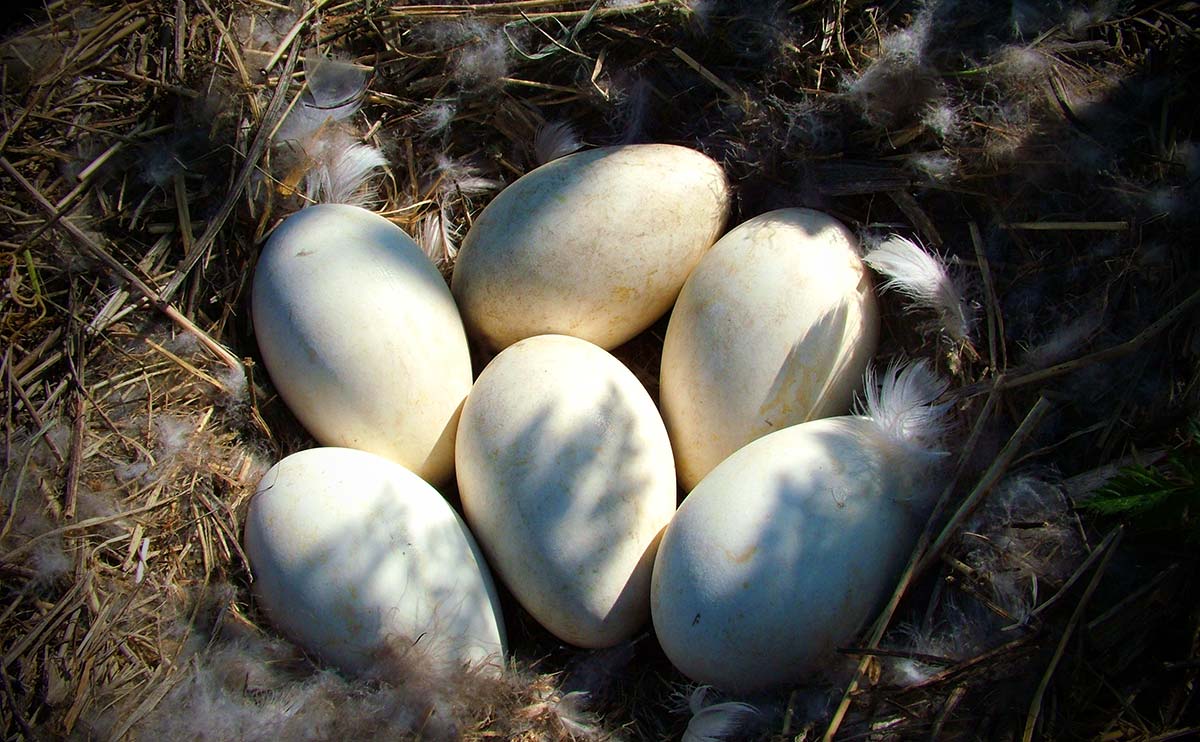 Pilgrim geese, one of the few heritage breeds developed in and native to North America, were once threatened with extinction. Palumbo is a farmer, but he’s also an educator and activist interested in sustainable food systems and cultivating old genetics in modern agriculture.

So for nearly 20 years, Palumbo’s Moon In The Pond Farm in Sheffield, Massachusetts has been home to a relatively friendly flock of Pilgrims who freely roost all over the property, hollowing out nests in the brush and covering them with a camouflage of leaves and hay you’d need eagle eyes to spot. The hens begin laying in late winter, producing an egg once a day or every other day until they’ve laid 40 or more.

The payoff is huge, so to speak: Goose eggs are roughly four times the size of a medium chicken egg.

Palumbo says there’s no scientific method to collecting free-range goose eggs. “We watch the geese as they parade around in little flocks. When one goes off by itself, we know she’s been up to something. She’s either laid an egg or is on her way to her secret spot.” The payoff is huge, so to speak: Goose eggs are roughly four times the size of a medium chicken egg. The massive eggs are also a good source of iron, folate and vitamin B12. “It’s a bona fide Easter egg hunt with a giant prize at the end,” Palumbo says.

Goose egg popularity has surged in recent years. Carolyn Gerdes at Tier Haus Farms in Wantage, New Jersey says, “I’ve added to my flock because I’ve had such a demand for goose eggs.” She receives requests year-round for eggs from her 15 Chinese and African geese, which only lay in the spring and summer.

But despite the higher profile for goose eggs, finding the eggs outside of certain markets proves a bit tricky. “I reluctantly ship eggs,” Palumbo says, noting he doesn’t have enough packing materials on hand to be set up for volume orders. “And I’m spokesperson and advocate for supporting local farms,” he says ”“ shipping long distances doesn’t really fit into that ethos. His most devoted customers drive upwards of three hours from Boston to his Western Massachusetts farm. His eggs sell for $5 a piece on the farm, or for $5.95 retail at Rubiner’s Cheesemongers and Grocers, just down the road in Great Barrington.

Devoted customers will drive upwards of three hours from Boston to Palumbo’s farms buy a single egg for $5.

Like Palumbo’s, Gerdes’s birds roam freely on the farm and eat an all-natural diet. Gerdes charges $2.50 per egg and delivers locally (within 30 to 45 minutes of her farm) and ships nationwide, with customers as far away as Washington State and Sarasota, Florida. There even a few online sellers. Tuckers Turkey Farm sells goose eggs through Local Harvest, charging $18 plus shipping for a half dozen.

Gerdes also receives requests from craftspeople specializing in egg carving and egg painting. “If they sell at Christmas craft markets, they order now to be ready for fall and winter,” she explains. Palumbo receives requests from pysanka artists (an Eastern European folk art that uses beeswax in elaborate egg decorating) seeking ultra-durable, pristine white shells and has perfected a drilling technique for hollowing out goose eggs. Some farms, including Metzer Farm in Gonzales, California and Bracken Ridge Ranch north of Sacramento, even specialize in blown eggs.

Besides the standard customer base of foodies and chefs, there are other goose egg aficionados: cooks specializing in Asian cuisine, or women of Southeast Asian descent who are either pregnant or trying to conceive. “The Asian market makes up the biggest bulk of clientele. They’ll pay the price,” says Gerdes. She also notes that much like the spike in duck egg popularity, goose eggs are popular with people who have chicken egg allergies. The protein composition in chicken eggs is different than eggs from birds like geese, ducks, quail and ostrich.

Despite demand, Palumbo probably won’t shift his focus to bulk shipments anytime soon. “I have sold as many as a dozen eggs to a Korean customer who was going to share them with others in her community. But [almost] nobody wants a dozen goose eggs. This is generally not a volume business,” he laughs. “One is volume.”

interested in heritage ducks and geese. Not only to preserve the breed but also to sell eggs