A Visit to a High School Hog Butchering Day

It's a banner day for FFA students at Broadway, Virginia's Broadway High School: hog butchering. Scrub the class schedule. There's a half-ton of live weight to process by the end of the afternoon. 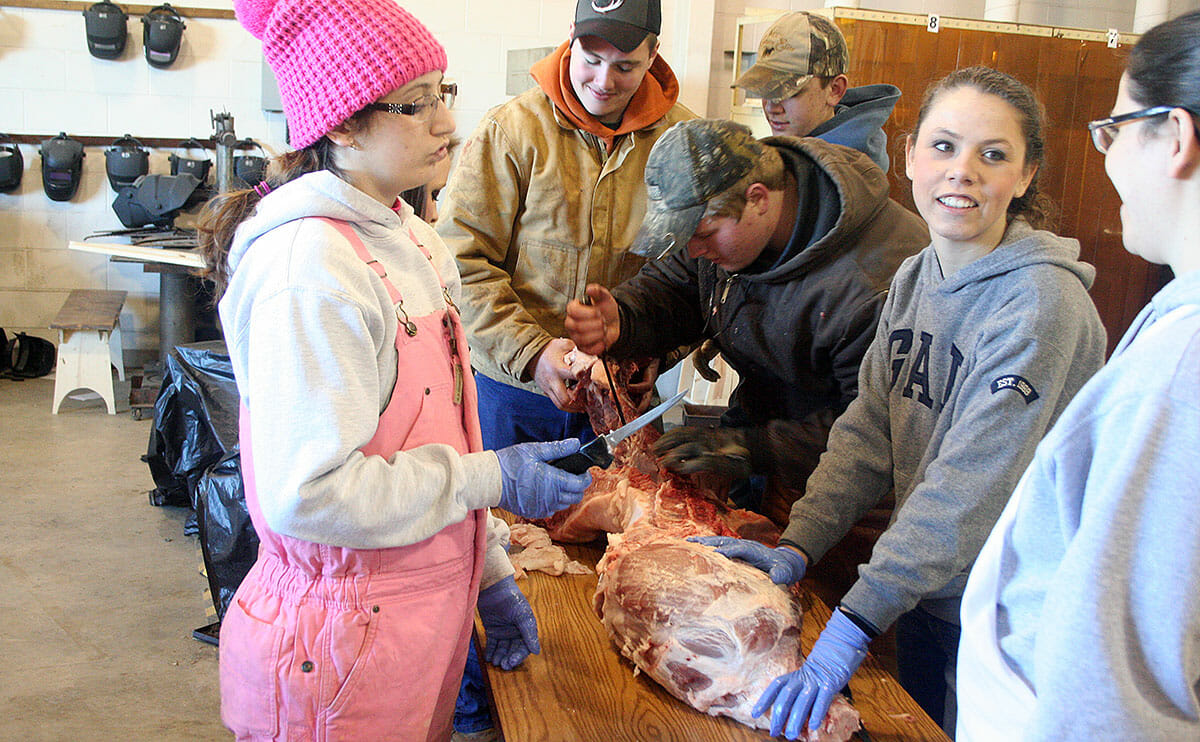 Broadway is in a rural part of the state, on the northern end of Virginia’s biggest farming county. More than 100 of the school’s 1,000 students enroll in one of its agriculture classes. Fifty-four kids belong to the FFA here, and for the past three winters, they’ve spent a day butchering.

They lay the halves out on tables in the school’s workshop, where they’re set upon by groups of students trimming off the fat with boning knives. There’s a Sawzall for when more firepower’s needed to get through bigger bones. They carve out the hams and loins, which they’re going to barbecue and serve for the FFA banquet later in the spring. Almost everything else is bound for the sausage grinder. Each half comes apart relatively quickly, but there are four hogs to cut up, process and package. There’s a long day ahead.

“It’s a lot of work, but it’s worth it,” says Christine Yankey, a senior and this year’s president of the school’s FFA chapter.

Once the sausage is ground and seasoned and packaged, the FFA will offer it to teachers and others at the school, at a suggested donation of $4 per pound. They can’t sell it outright, because there isn’t a USDA inspector here, wandering around to check things out.

“It’s my favorite part of the year, no doubt,” says FFA vice-president Madison Hinkle, also a senior. The educational aspects of the day are important to her ”“ “everybody knows [sausage] comes from a pig, but they don’t know each part, see it, know how it’s done” ”“ as is the recreational piece. Spending a day cutting up hogs in the shop means not whiling away another day in the classroom.

Hinkle has butchered hogs at home ever since she can remember, and serves as one of a few lead “cutters” showing their classmates the ropes of butchering. One of the others is a freshman, Jacob Earhart.

“I just grew up doing it, I reckon,” he says. On the back of his sweatshirt is a statement of farmer pride: “You say ‘raised in a barn’ like it’s a bad thing!”

These particular hogs were raised in a barn a few miles away, on Steve and Jackie Lohr’s farm. Steve is a Broadway grad himself; he met Jackie, who went to another local high school, through FFA way back when, and their oldest son, William, is among the high-school butchers huddled around the tables in the ag shop.

Last fall, the Lohrs donated the hogs, then weighing in at around 50 pounds, to the Broadway FFA. In the months since, the chapter paid for feed, while the Lohrs continued to house and feed them as they grew to slaughter weight, between 275 and 345 pounds. The hogs are (or at this point, do we say “were?”) “exotics,” which is a fancy porcine term for a mutt or crossbred pig.

“Seeing how the food goes from the farm to the plate – you just can’t get that in school without this experience,” says Jackie.

The ag teacher at Broadway, Callie Randolph, doubles as advisor for the school’s FFA chapter and integrates butchering day into her larger ag curriculum and the life of Broadway High School in general. In addition to the hands-on learning going on today, Randoph has her ag business students look at the costs, revenues and margins of the hogs’ entire farm-to-table journey. The organs will go to an anatomy class for further study. Groups of other students pop in during the day to rubberneck. Demand for sausage runs high.

The little nubs, pieces of bone and other awkward scraps and tedious trimmings, collectively called the “pudding meats”, end up in a kettle outside, where they’re boiled into a broth. Some of the meat that separates from the bone goes back into the sausage grinder. Other pieces stay in the kettle, to which, at the very end of the day, they add cornmeal and spices and cook everything down to a thick porridge. This is scrapple, ladled into tins and left to set up, later available for $7 (suggested donation again) to the larger Broadway High School community.

The day winds to a close. Well over 200 pounds of sausage is vacuum-packed and ready to distribute. A crust is forming on the scrapple kettle and ladles. Some of these kids may never butcher a hog again, some have been doing it their whole lives and won’t be stopping now. And all of them have now spent an entire, memorable day of high school taking four pigs and turning them into food.