The Case of the Drunken Pigs - Modern Farmer
Animals, Plants

The Case of the Drunken Pigs

What happens when pigs figure out how to get access to booze? Nothing pretty. 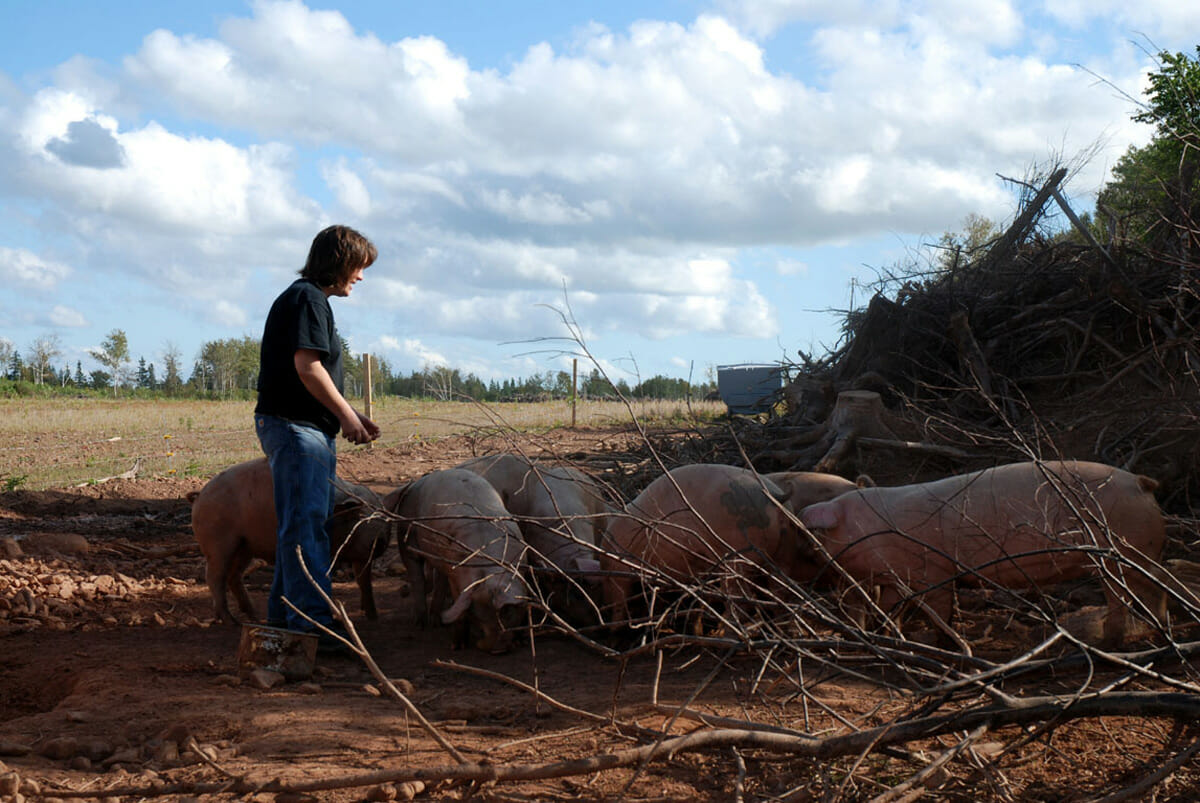 “We’re just going after the sugars, so there’s still lots of nutrients left in the mash. We thought it made sense to feed it to something,” says Shore, who is originally from North Carolina. “Pigs are great, being from the south. I love pork, and you don’t have to keep them as long as cows.”

Every day during the spring, summer and fall, Shore walks out to a pig pen, located on the same property as the distillery, and dispenses a small amount of leftover mash into the pen, which is a bit alcoholic but not enough to make the pigs drunk (usually). But that was before one of her Berkshires – she’s pretty sure it was the one with the triangle-shaped patch of white on his face – scored an open bar.

Tippling animals aren’t unheard of – one infamous Swedish elk got stuck in a tree after eating too many fermented apples, an Australian wild boar was seen fighting a cow after drinking three six-packs, and Pinky the beer-drinking pig is the main draw at a bar in Tasmania – but Cate Dewey, a pig expert and associate professor at the University of Guelph’s veterinary college, says this is the first and only time she has heard of a large group of pigs getting drunk at once.

For decades, pigs have been used in science experiments and trials because their organs, muscles and metabolisms closely resemble those of humans. In 1977, the Associated Press reported on a group of pigs, used in alcoholism experiments, that developed a quart-a-day vodka habit, preferring screwdrivers – orange juice and distilled grain alcohol – over water or cola mixers. A few generations ago, says Dewey, farmers would feed beer to a nervous sow to calm her down before giving birth, and to prevent her from killing her young.

“What you’re describing doesn’t surprise me, because we are physiologically the same, but I must say that I’ve never heard of pigs getting access to alcohol,” says Dewey, who does much of her research work in Kenya, where women traditionally brew their own beer. “The women routinely feed the beer mash to the pigs, but I’ve never heard of pigs in Kenya getting drunk.”

‘Some were looking at me like, ‘Woohoo!’ Shore says, ‘They were really, really, really drunk. They were snortin’ and dancing around; having a good ol’ time.’

But that’s exactly what Shore’s pigs did that day.

It started when, earlier that day, Shore heard a strange “ding!” coming from the direction of the pig pen. A pig was trying to get at the distillery mash for an unscheduled meal.

“I crouched down and made my way so the pigs couldn’t see me walking out there, until I heard it again. I peeked around, and noticed that this one mischievous pig was trying to hit the valve with its head. I just laughed it off and thought, ‘Silly pig!’ and went back to the distillery,” says Shore. “I never thought he’d get it open, just the way the valve turns,” she laughs. “But he did. He totally emptied the tank.”

A few hours later, when she stumbled upon her hammered pigs, the whole tableau was uproariously funny for about three seconds, says Shore.

“Some were looking at me like, ‘Woohoo!’” Shore says, her voice trailing away into laughter. “They were really, really, really drunk.” A few pigs were trying to walk but their back legs kept giving out, and the rest were spinning in circles, kicking up their back heels, and as Shore says, “snortin’ and dancing around; having a good ol’ time.”

But she quickly realized the gravity of the situation. “I called my partner and said, ‘We have a situation,’” says Shore. “I was pretty sure I was going to have a dead pig the next day, because they were so drunk… Usually what I give them every day would be equivalent to less than a six-pack, but what they ate that day would have been equivalent to a couple bottles of spirits.”

One by one, the pigs passed out, and in a few hours they were all fast asleep.

The next day, Shore woke early and headed towards the pen, expecting to find at least one dead pig. Sure enough, at the end of the field, one pig was splayed out on its side. “But he looks up at me, and the couple of pigs that were following started nudging him underneath his ears. They looked up at me like, ‘Uh, he don’t feel good.’ So I got a big bucket of water and put it right next to him, Arla brought up some watermelon, and throughout the day we just made sure he was hydrated,” she says. “They were all pretty green.”

But, like humans, that didn’t mean they had learned their lesson.

“I kid you not, later on I was working in the distillery and I heard ‘ding!'” says Shore with an incredulous laugh. “So I closed the valve with a wrench.”

Pictured above: Julie Shore with some of the culprits.

So to make that Japanese beer you use the stuff that was mentioned above . Then feed the pigs the leftovers! Do you regular yeasts and how do you make the mold !