Bonnets, Drones and Tri-Tip: 6 Scenes from the World Ag Expo

Scenes from the World Ag Expo, where over 100,000 people from 70 countries explore the 2.6 million square feet devoted to agriculture. 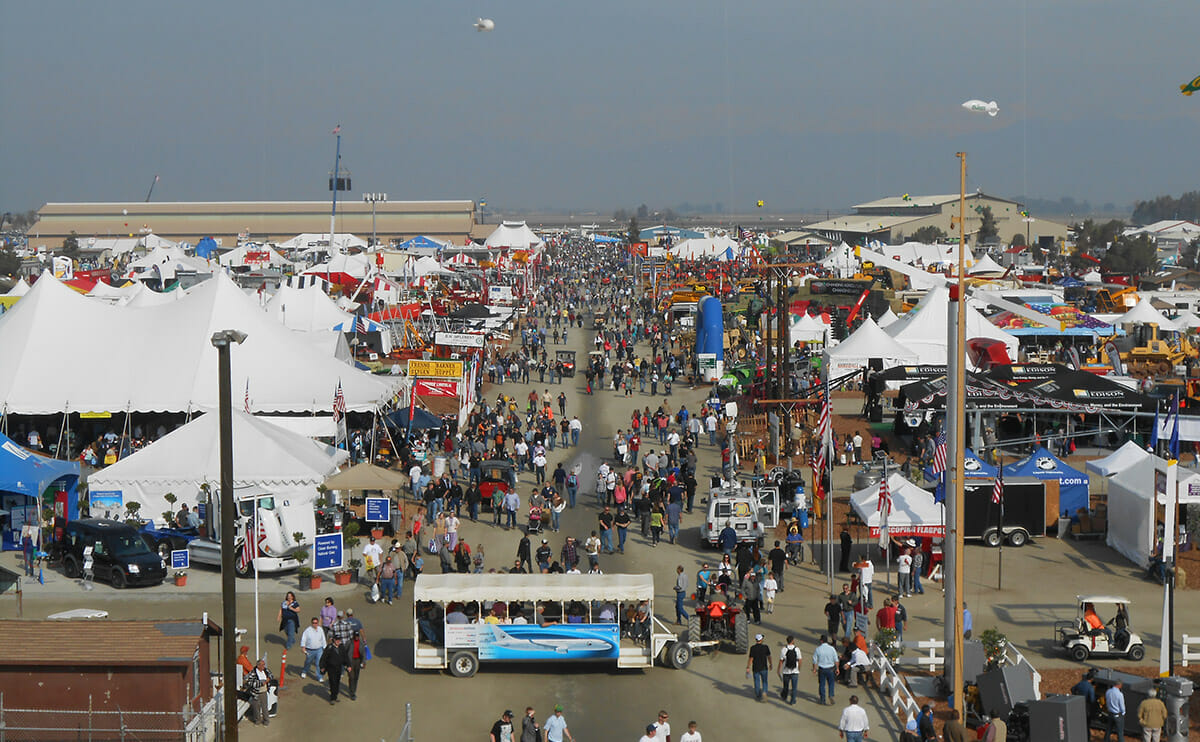 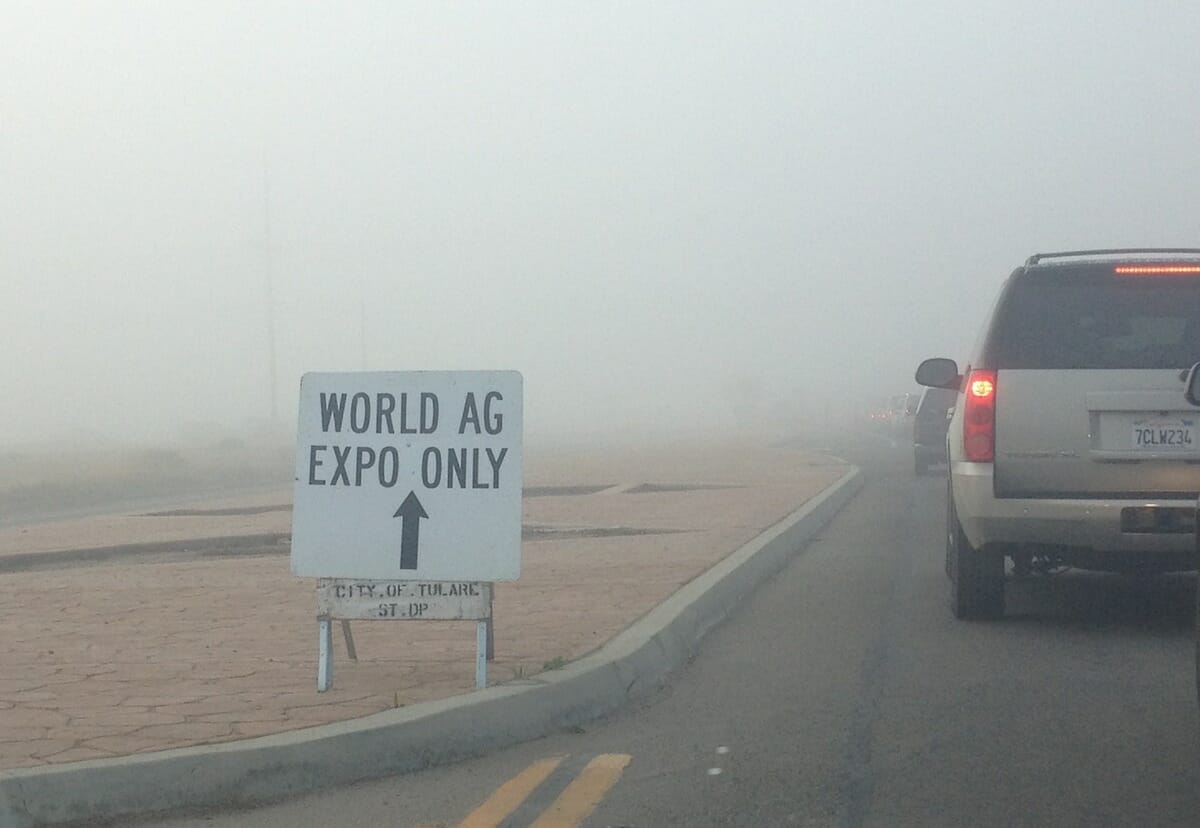 Although fog seems to be the main attraction, once farmers and other ag enthusiasts are on the grounds ”“ it’s mid-February playtime. Over 100,000 people from 70 countries are expected to explore the 2.6 million square feet of exhibit space over four days.

With over 1,400 exhibitions of the newest farm equipment on earth, the technology alone would warrant a story. But that’s only one element of the World Ag Expo experience. Here are six observations from the show:

1. It’s All About the Drought 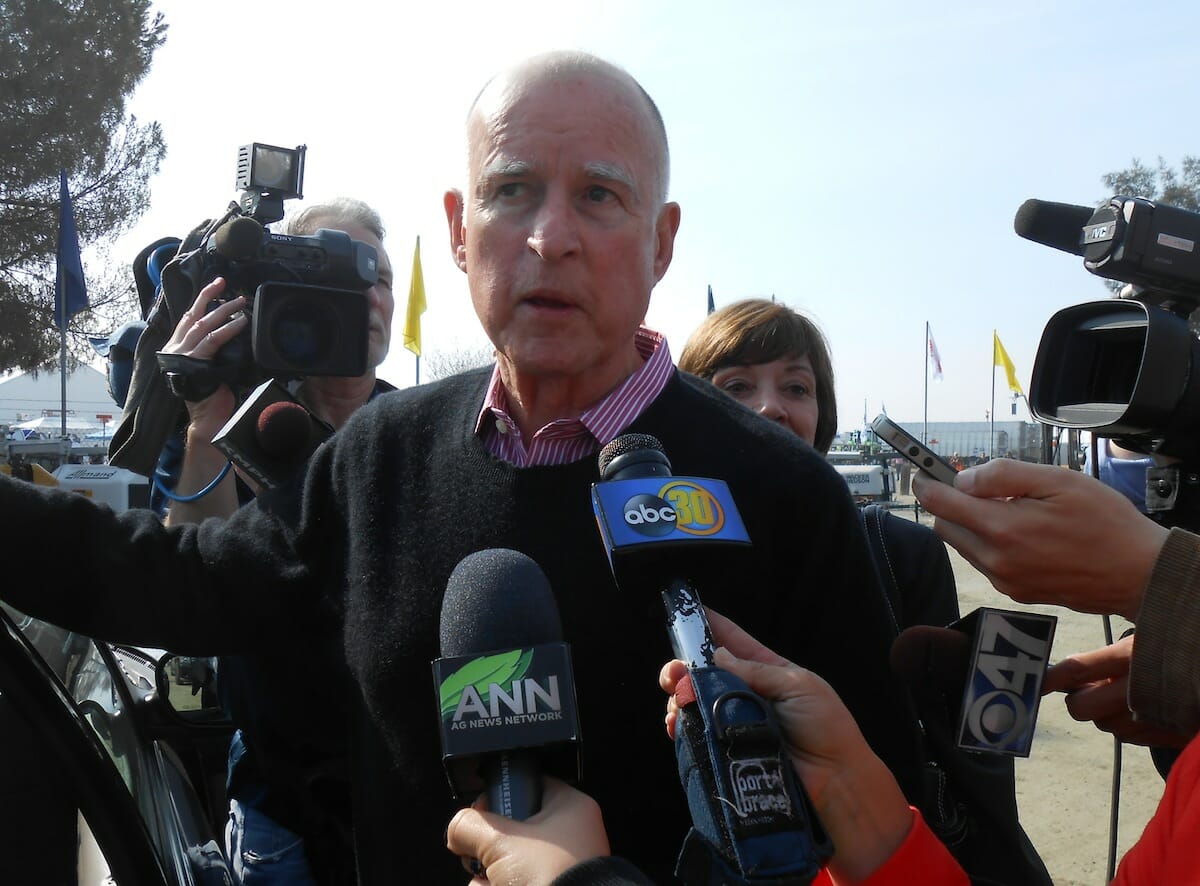 When California Governor Jerry Brown shows up to stroll the pistachio shell-lined streets of the farm show while talking with media and farmers about the drought, you get the sense that the Golden State’s in trouble.

I’m trying to be the governor of the whole state, bringing people together, get the water in the short term, long term, but when God doesn’t provide the water it’s not here. But we are changing regulatory rules; we’re going to make it as best we can in some very tough circumstances.

Brown isn’t the only one worried about the drought. Devon Burnias is a second-generation farmer who manages over 750 acres of row crops with her father. They live 15 miles south of the expo.

The slogan on the shirts she sold at the “Women in Agriculture” booth perfectly sum up the underlying theme of the expo.

“We decided to go with the ‘Pray For Rain’ slogan this year,” Burnias said. 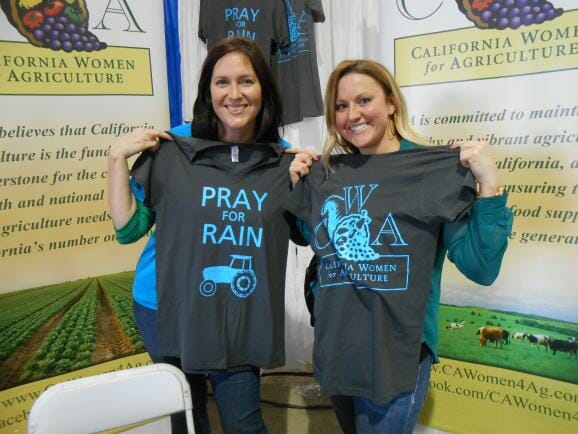 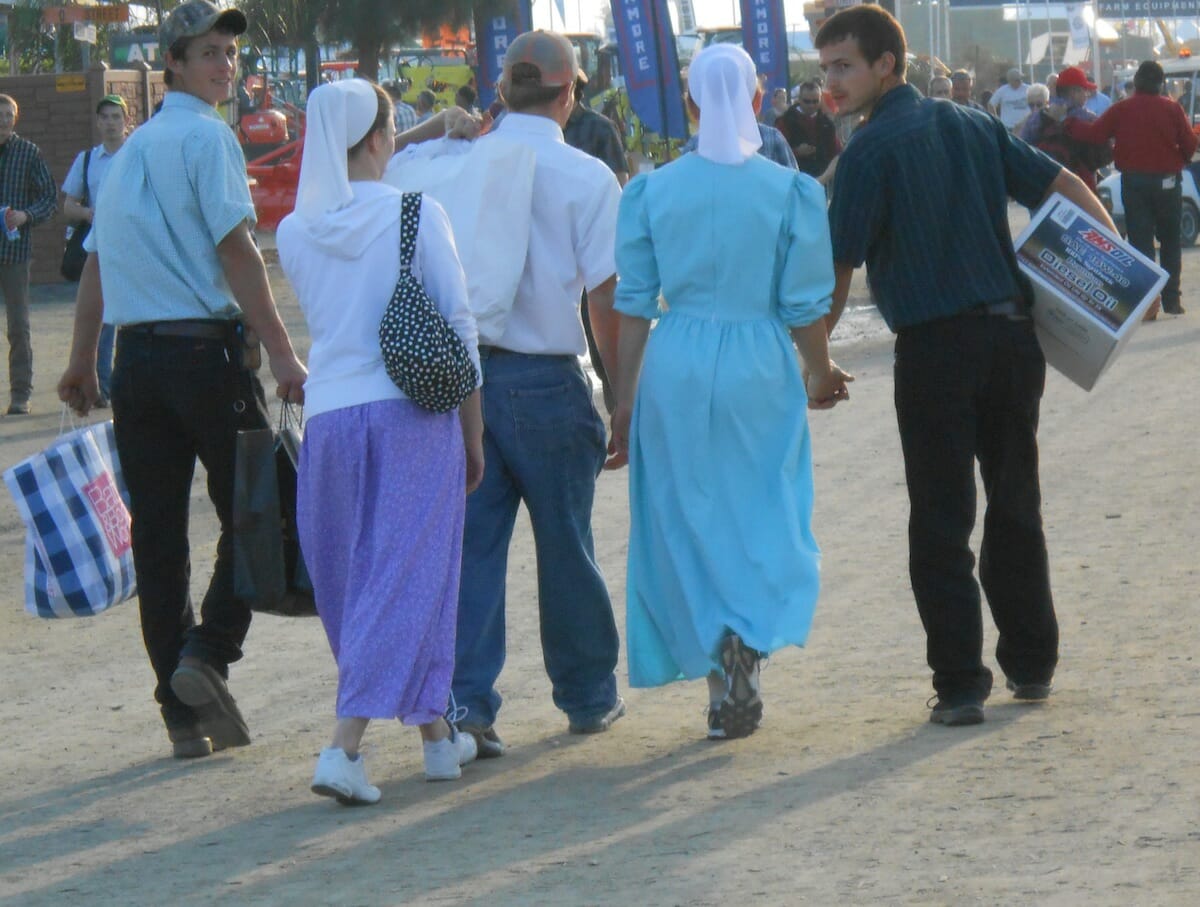 Fashion trends in farming can be tough to spot — the comfort of flannel, Carhartt pants and a cowboy or John Deere hat is timeless. But another timeless trend that gets less attention: Bonnets and floor length dresses, around every corner. They’re worn by Mennonite, Baptist and Amish farmwomen who travel to the show. One Baptist bonneted woman I spoke with refused to share her name or photo but said she’s made more than 100 bonnets. 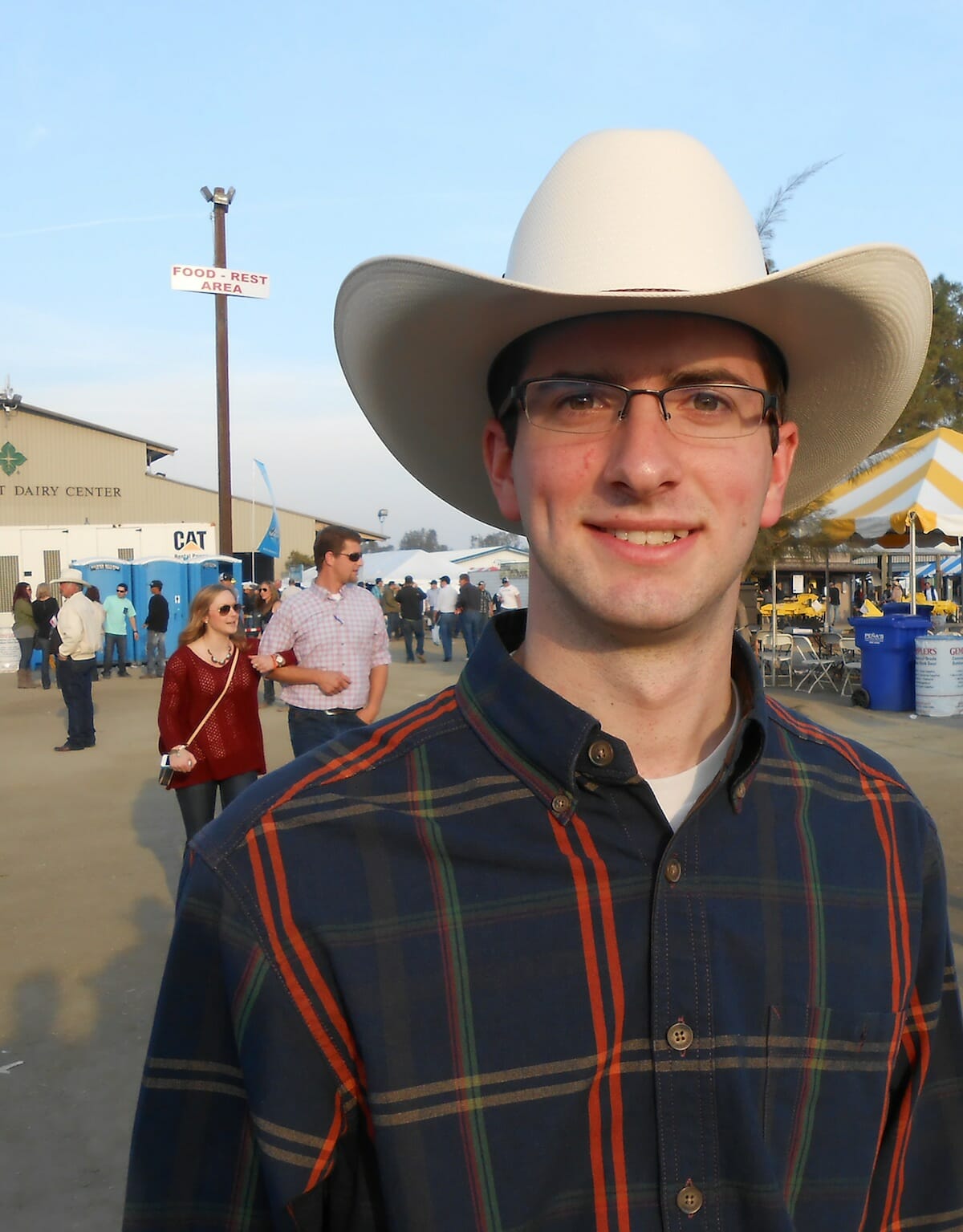 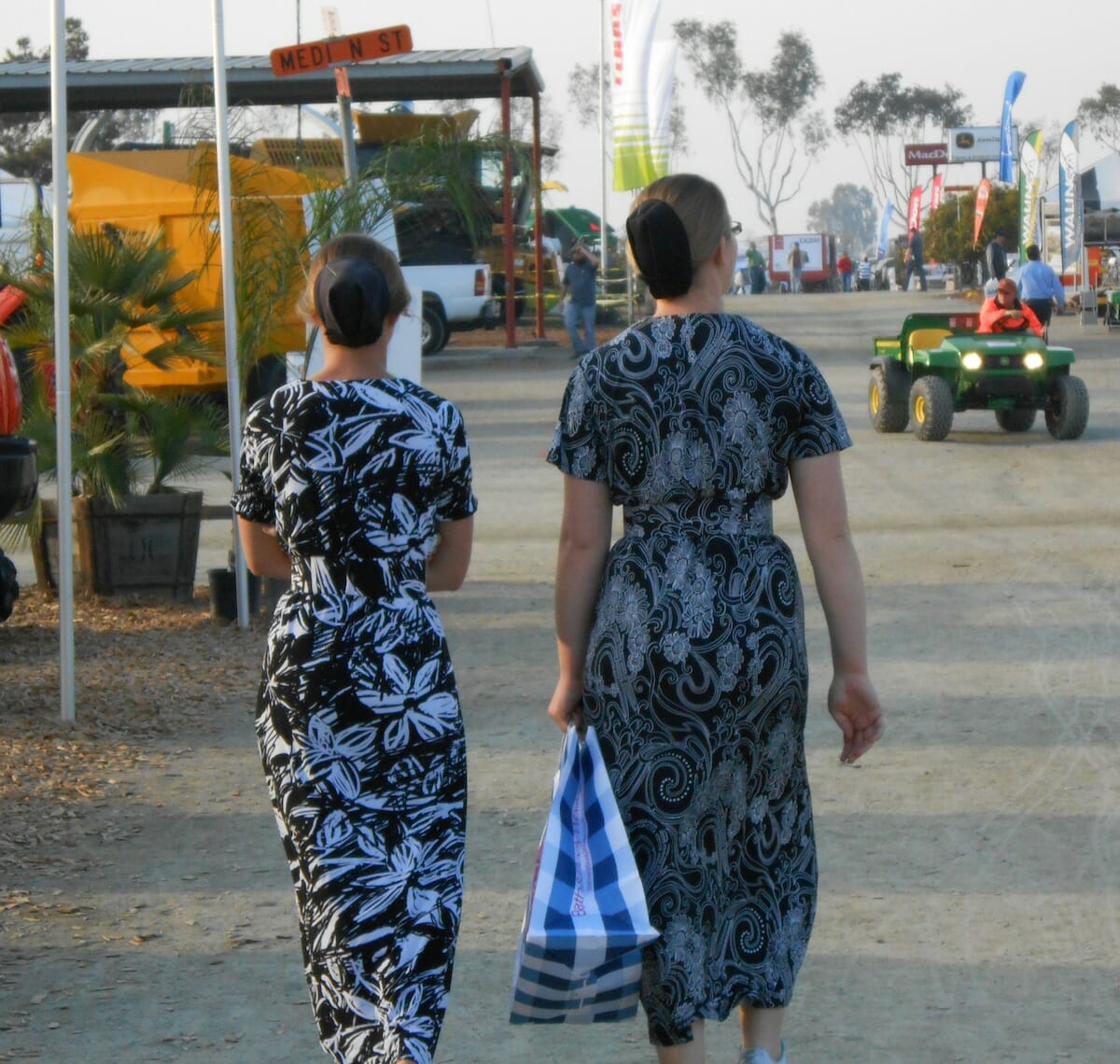 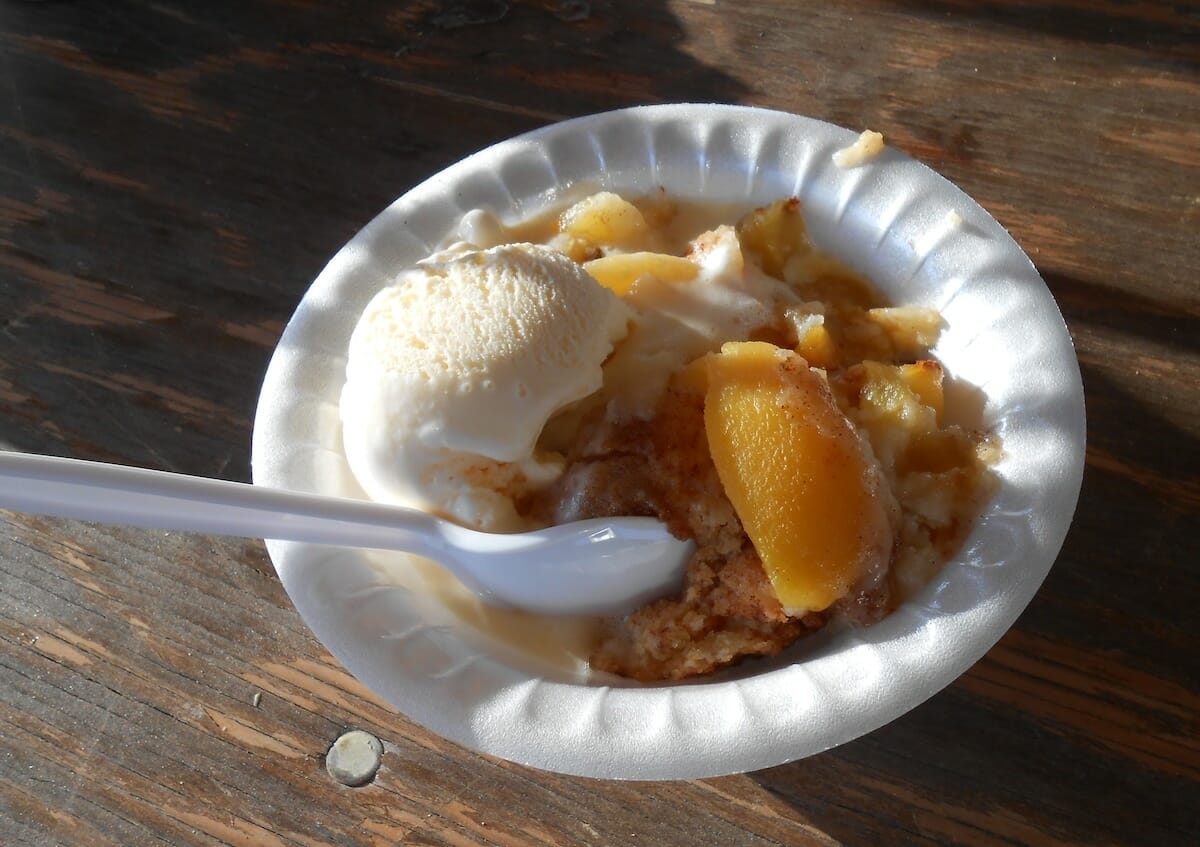 Staring at tractors and farm equipment all day makes farmers hungry. Here’s a bit of what they ate.

Course 1: Folks in Central California eat tri-tip instead of brisket. Tri-tip in a hoagie, in a bun, with onions, jalapenos, barbecue sauce, ranch and so on. In the restaurant corridor the smell of barbecued beef was strong — there must have been at least 10 tri-tip vendors. 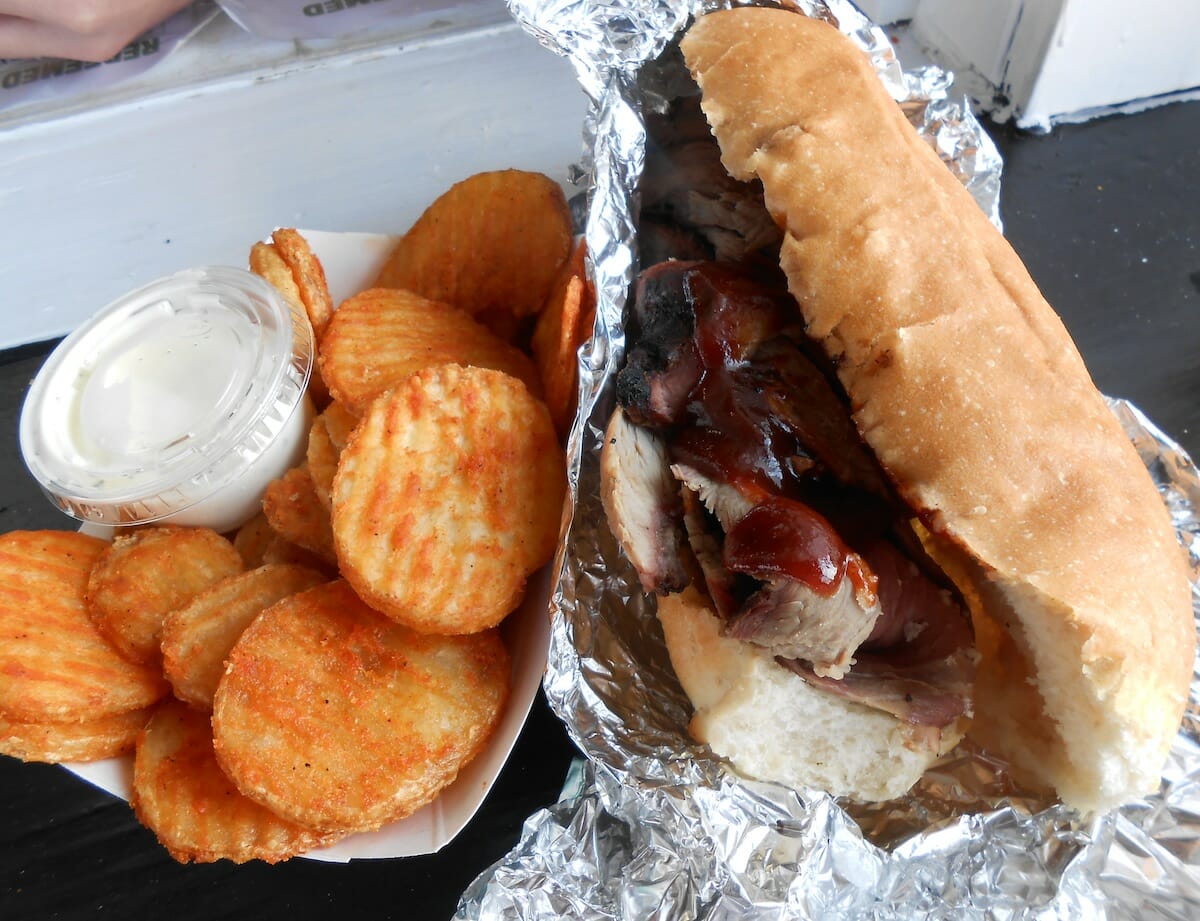 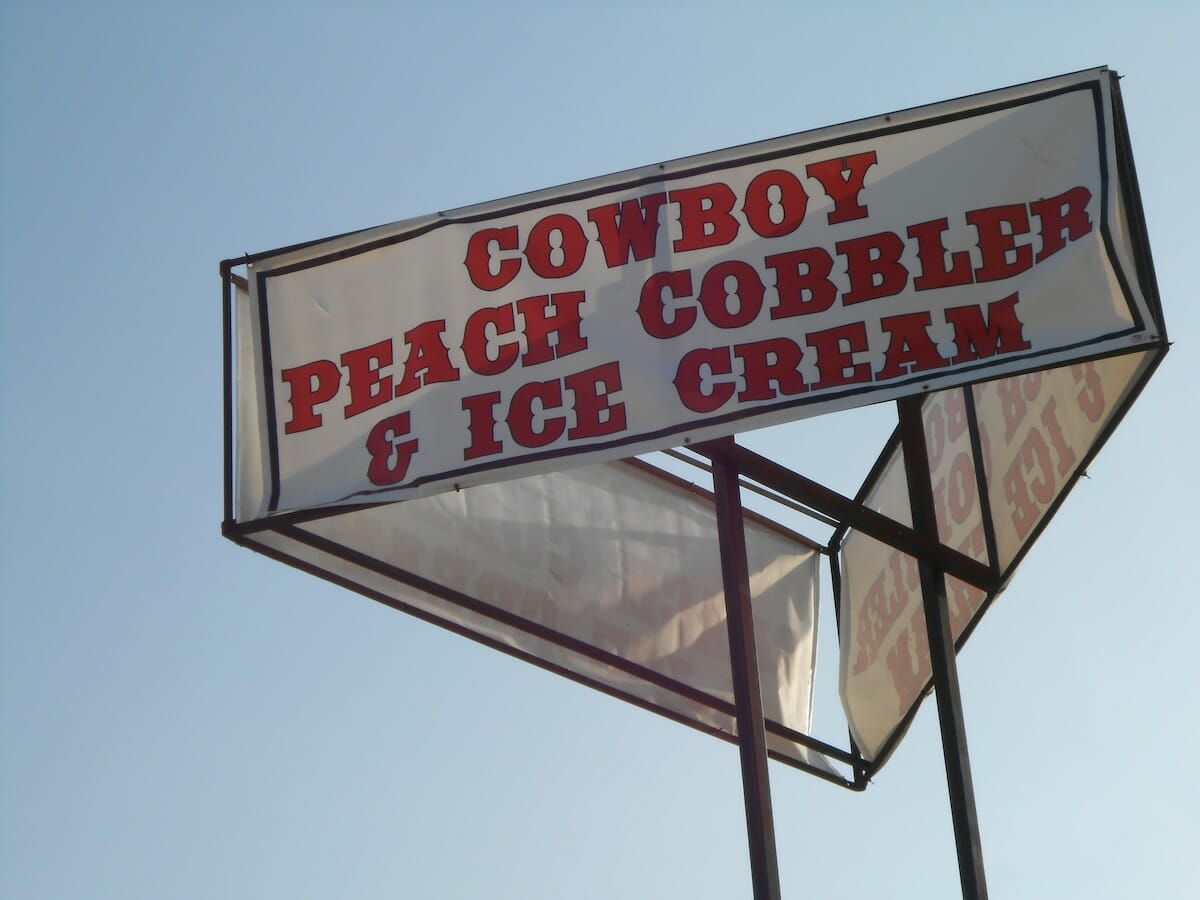 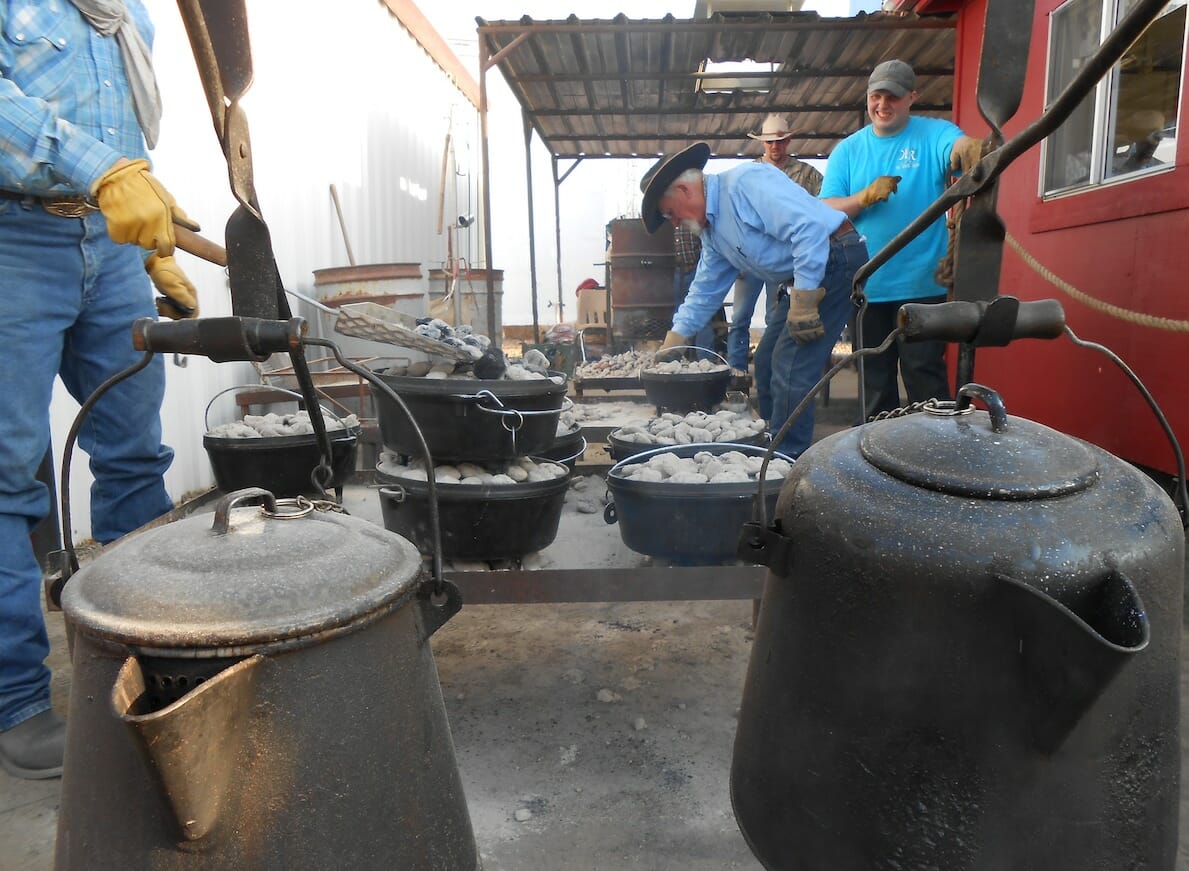 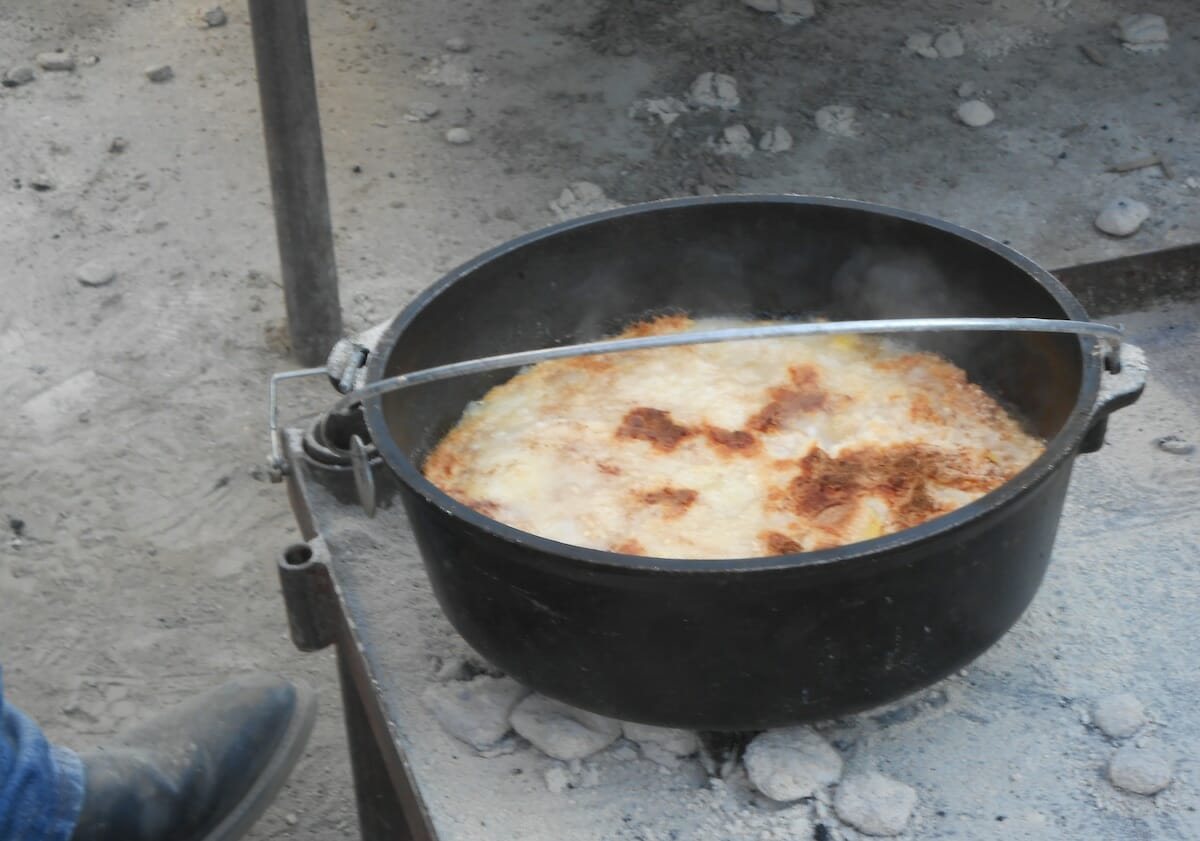 Randy Hammel has cooked peach cobbler at the expo for over 20 years with the Kaweah River Senior Drill Team.

“The bottom line is that it’s cooked in a cast iron pot,” Hammel says. “Cast iron is probably the best cooking utensil you can find. It imparts a flavor that other alloys don’t and it’s kind of cool because that’s what my dad and mother and grandfather and grandmother and great-grandmother did. They all cooked with cast iron.” 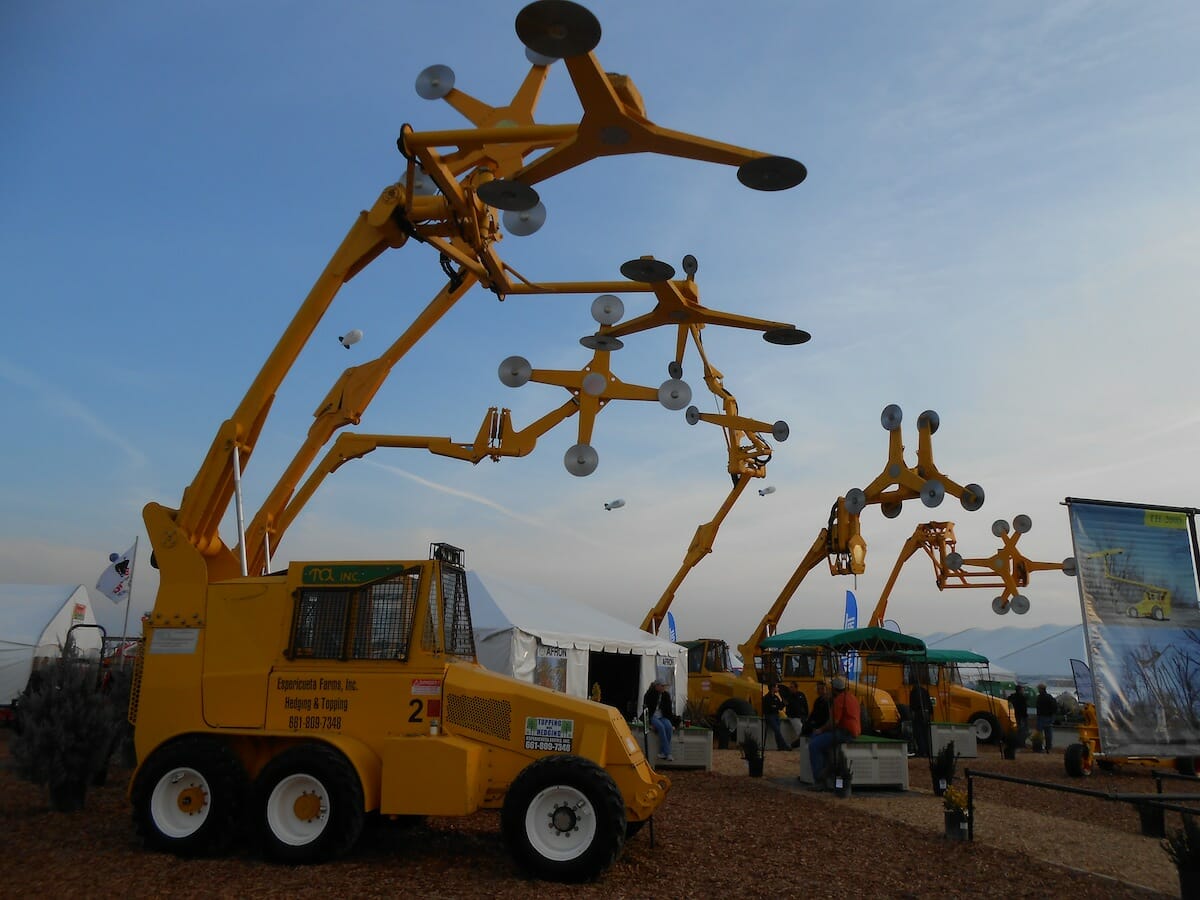 Giant Hedger: To a child or anyone without an almond grove this 25-foot tall hedger could appear monstrous. But in reality the double rotary hedger made by the Israeli company Hol Inc. in Tulare, California, keeps fields of tree fruit and nuts tidy. 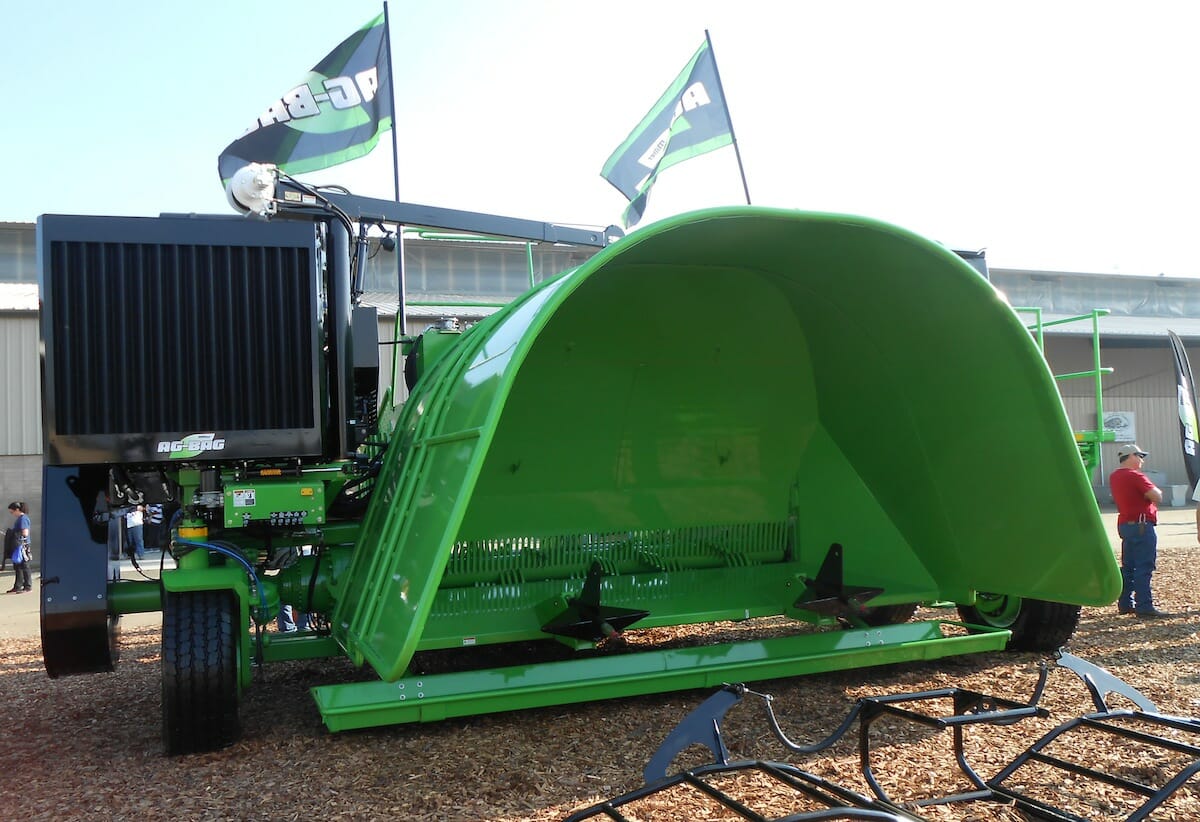 Silage Bagger: This green behemoth of a machine takes corn and other row crops, mulches the stalks and vegetables and forces the mulch into a long airtight white bag resembling a giant sausage casing. Miller-St. Nazianz, Inc designed the Ag-Bag. 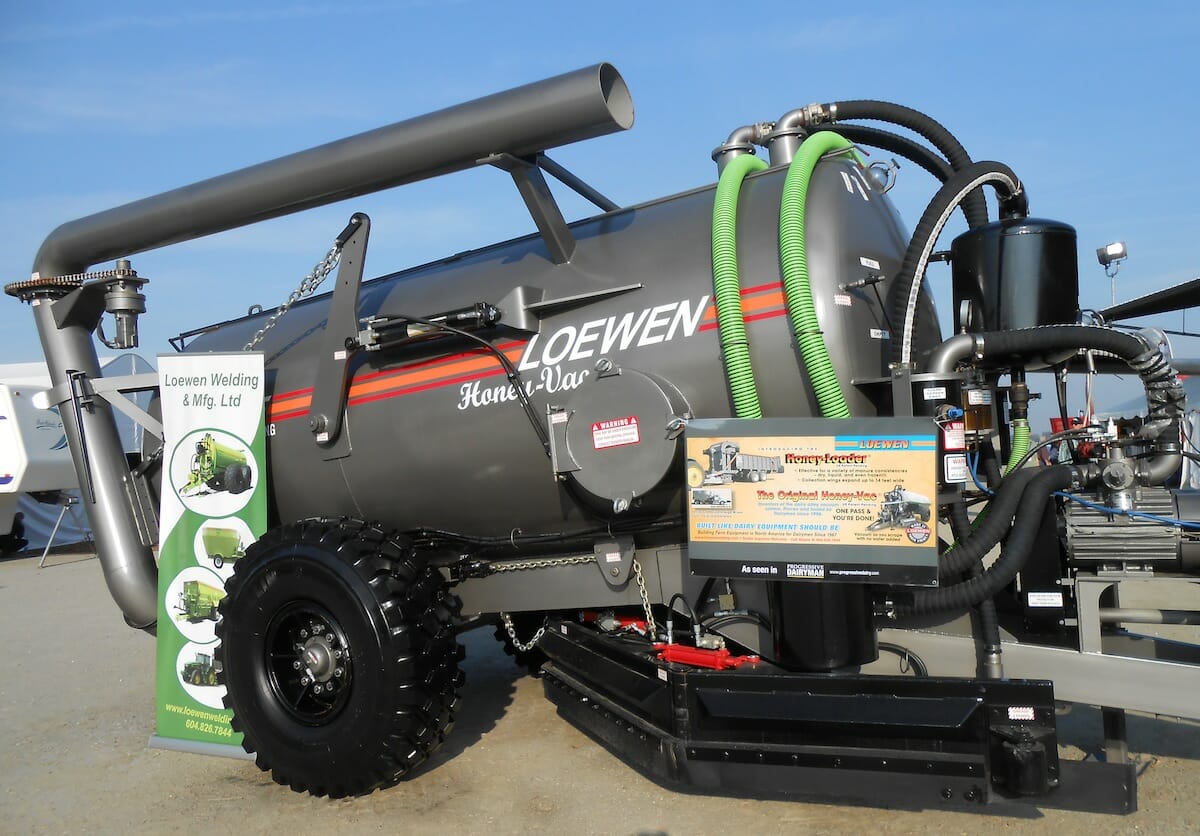 5. Innovation at the Expo 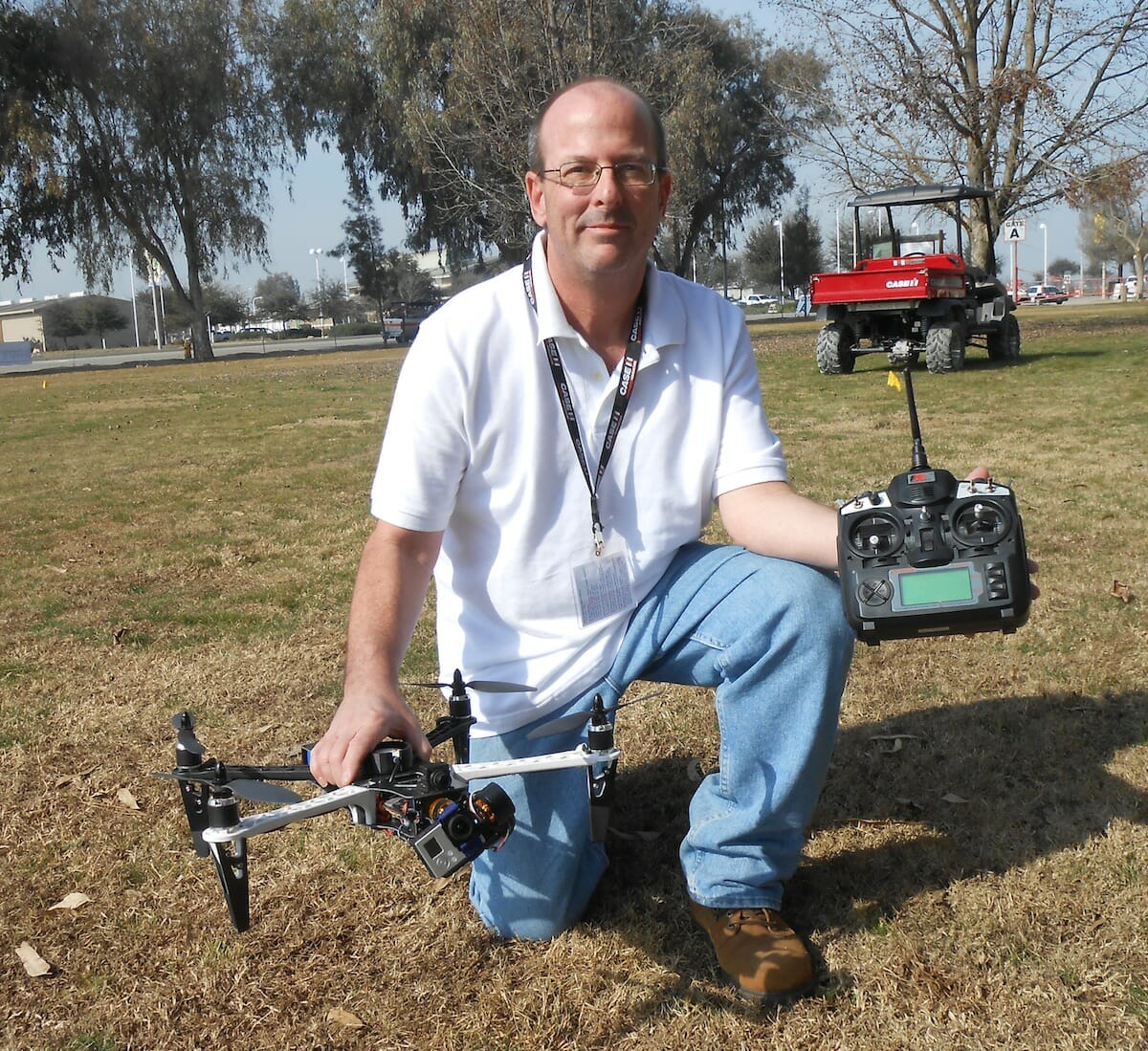 Drones. The use of unmanned objects can either excite or send fear down one’s spine, but at the Expo, talk of drones for agricultural use drew crowds. The GeoBlu Explorer (pictured above) is a lightweight battery-powered unmanned aerial vehicle that gives farmers an eye in the sky. The device enables the user to track livestock, scout crops or inspect livestock. The GeoBlu Explorer was created by Phoenix-based Jared Siegler and prices in the ballpark of $3,000. (See this piece if you’re concerned about the legality of farm drones.)

In the same vein of the drone, aerial imaging subscriptions were a big hit at the show. AgVu, based in New York, offers a new type of aerial imaging that can give farmers early detection of crop problems for better informed decision making. The maps subscription is based on subtle variations in the wavelengths of light reflected by plants that can change in drought or in plenty. The maps are color-coded and reveal moisture content in an area of land. 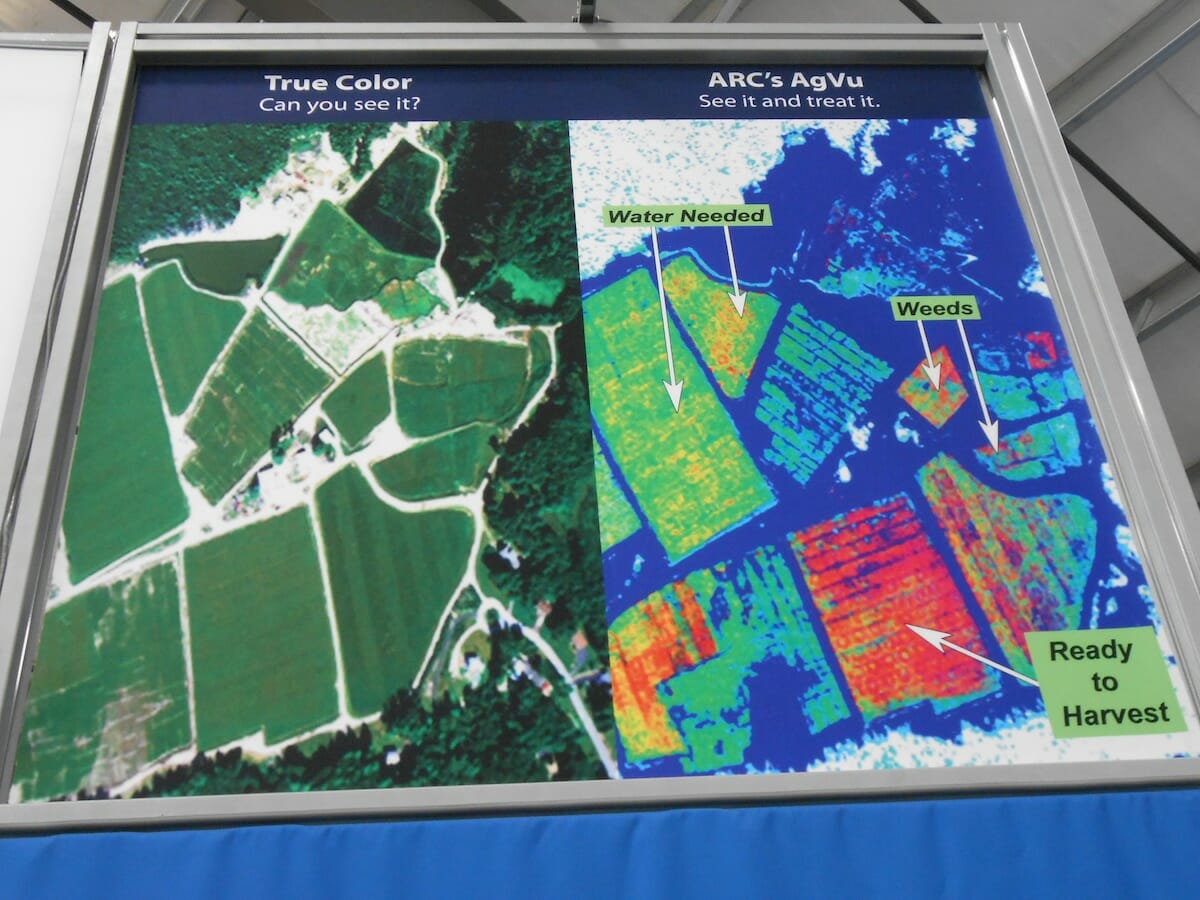 This photo shows the difference between a regular photomap of a cranberry bog and an AgVu map of the bog. 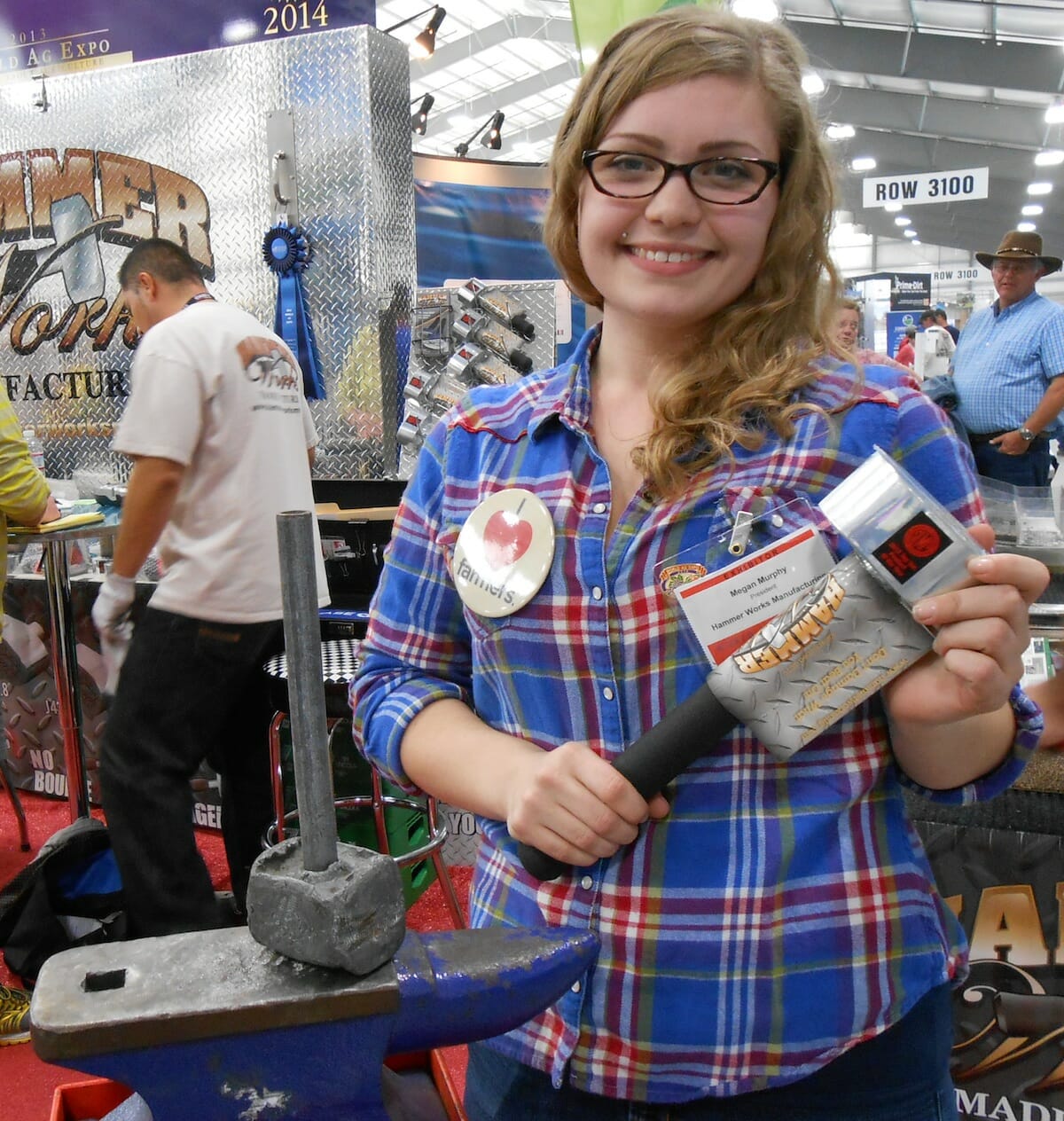 Let’s face it — the world of ag has been a men’s playing field, but it’s obvious times are changing.

Megan Murphy is 25-years-old and she’s the president of Hammer Works Manufacturing in Visalia, Calif. Her mother owns an auto shop and her father’s invention of the no-spark, no-bounce hammer made the top 10 New Products list at the Expo. The ML5.8 is a long-handle, zinc-composite hammer that when striking objects doesn’t create sparks or damage what it’s hitting. The hammer costs around $110 compared to the $170 hammer that can damage what it hits, Murphy says.

Murphy draws inspiration from her mother.

“Actually my mom, 13 years ago, when I was in the 7th grade, she and my step-dad opened an own automotive repair shop and she pretty much stepped in and ran it,” says Murphy. “I’ve kind of had that example in my life ”“ that it doesn’t matter whether or not a woman is normally in that business, you can learn it and take it over. It’s not that hard, you know?”