How to Set Up a Home Generator - Modern Farmer
How-To, Technology

How to Set Up a Home Generator

With wild weather on the rise, home generators are no longer just a convenience, but a necessity. Here is our handy guide. 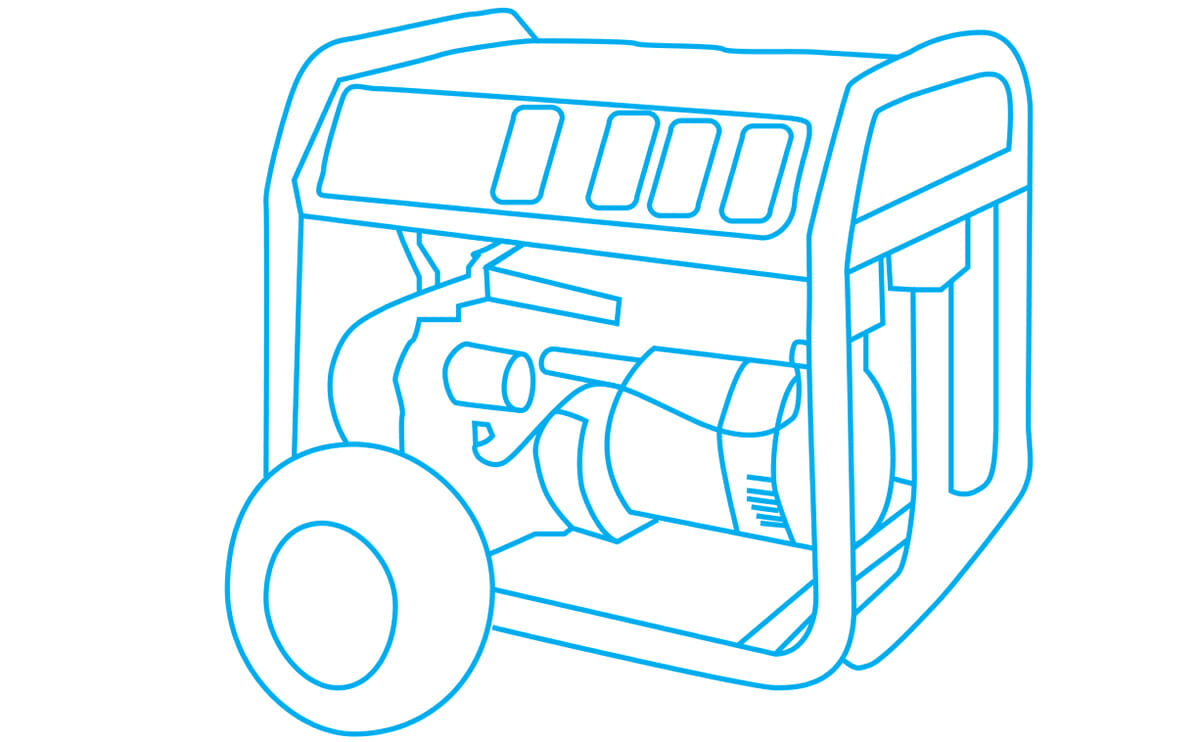 Severe weather costs the United States between $18 billion and $33 billion a year. And that number just goes up when there’s a major event: In 2008, when Hurricane Ike hit, weather-related outages cost the country between $40 billion and $75 billion per a 2012 White House report. Hurricane Sandy knocked out power for more than 8 million Americans. For those experiencing more regular power outages, generators are no longer just a convenience, but a necessity. Here is our handy guide:

If you haven’t thought about watts since grade school, know this: They measure power. One kilowatt is 1,000 watts. The higher the wattage of an appliance, the more electricity it consumes. The generator size you buy depends on the wattage of the devices that you want to keep running. So first, add up the wattage requirements of your essential devices. The average lightbulb is 100 watts. A coffeemaker uses about 1,000 watts. A refrigerator runs on about 1,000 as well. If you ration what you use during a storm (say, unplug the refrigerator for extended periods), then you can justify a smaller generator.

Which Generator Is Right for You?

Small Portable: The smallest generators are gasoline-powered, pull-start models that put out between 1,000 and 2,000 watts and are handy for power tools and recreation. Newer “inverter” generators have appeared on the market within the past decade. Quieter, more efficient and lighter than conventional counterparts, they often cost about twice as much.
Price: $400”“$500.

Large Portable: A 7,500-watt gasoline-powered generator will be enough to keep the lights on and power most home appliances, with the exception of central air-conditioning and heat.
Price: $1,000”“$1,500.

Whole House: Starting at about 12,000 watts, these generators can generally keep a home running without missing a beat. You’ll be able to run lights, fans, TVs, refrigerators, computers, space heaters and pretty much anything else you plug into an outlet. In rural areas where water comes from a well, it can run the well pump, too. These are wired directly to your electrical system, powered by propane or natural gas and will require a professional electrician to install.
Price: $5,000”“$10,500 including installation for a 12,000-watt model, and up.

1. It’s really critical to take safety precautions when running a portable generator. First, never run generators inside a home, garage or enclosed space, or near open windows or any place that carbon monoxide could enter.

2. If you’re using an extension cord to bring power from a portable generator to your appliances, it needs to be rated for the amount of power coming through. And it should never be plugged into an outlet in a home. This can cause backfeeding, which means that power travels the opposite way through power lines and can injure or kill utility workers trying to restore power.

3. Wiring a generator directly into your home must be done by a licensed electrician.

I purchased a Westinghouse generator rated at 12kw sustained and 15kw peak to power my house during extended power outages. I live in Florida so I never get snow but I get plenty of hurricanes passing through. A hurricane is such a large and powerful storm that it does not have to make a direct hit in order to cripple utility services and other such modern conveniences. Even a glancing blow can leave entire cities and counties with snapped utility poles, downed power lines and widespread power outages. The trick to using one of these generators effectively is the installation… Read more »

Been looking into buying a generator lately and this is helpful information. With the weather being so crazy from time it time, it could be a real life saver.

It’s interesting how you can make sure that a home generator should properly set and must consider all the safety measures.

Thank you for this great article! I think ppl forget how important the proper setup is for a home generator is.

We service home generators all the time! This article is a great review of safety measure when using a gas-powered generator. I hope many people read and heed this advice!

I think ppl overlook how significant the correct arrangement is for a home generator is.Thanks Andrew Jenner. This article is an incredible survey of wellbeing estimates when utilizing a gas-controlled generator.

Looking to buy a 12000 watt generator for power outages to run 3 ton ac, 1/2 hp well pump and most things in house except stove.

Thank you for this Amazing article!

“The generator size you buy depends on the wattage of the devices that you want to keep running.” So important.. don’t need to cause additional issues.